Hi All, I first started this group of larches when I collected some from a firebreak in Wales with members of ABBA.
I then created a group of 15 trees. This was in the late 90s.
In 2000 I was introduced to a chap called Eric Todd by a family friend, Eric was at that time struggling with being diagnosed with Asbestosis and was unable at the age of 78 to look after his trees as well as he would have liked. 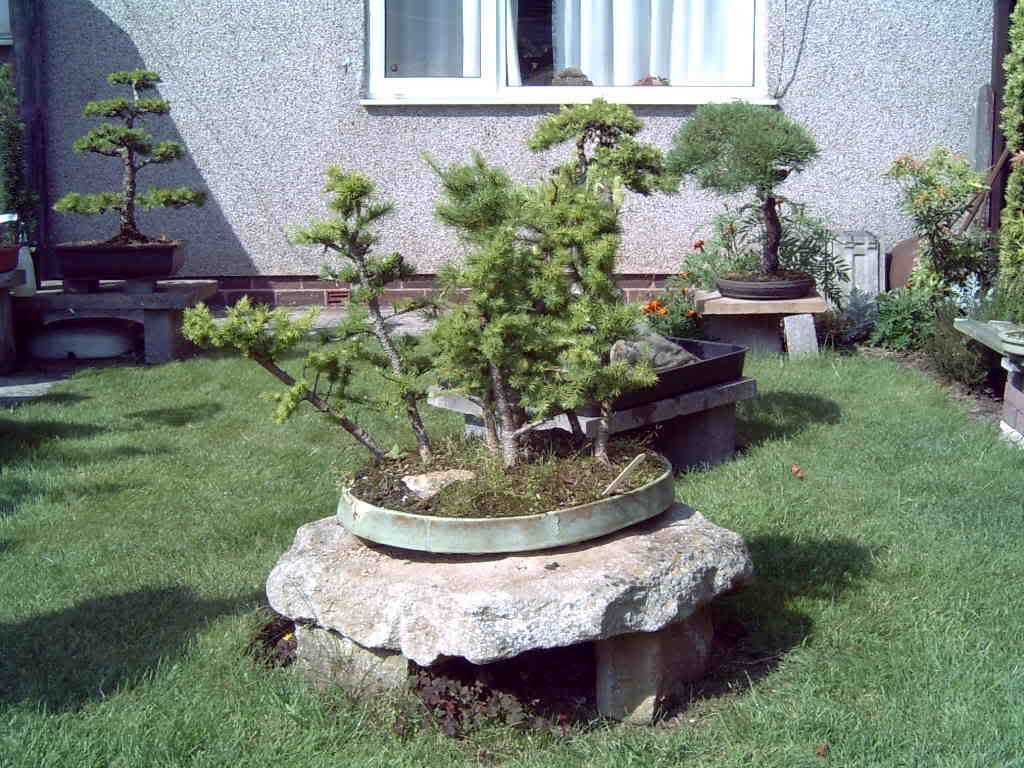 Around about 2009 I repotted his trees and amalgamated mine for his pleasure this was a group of 17 trees. 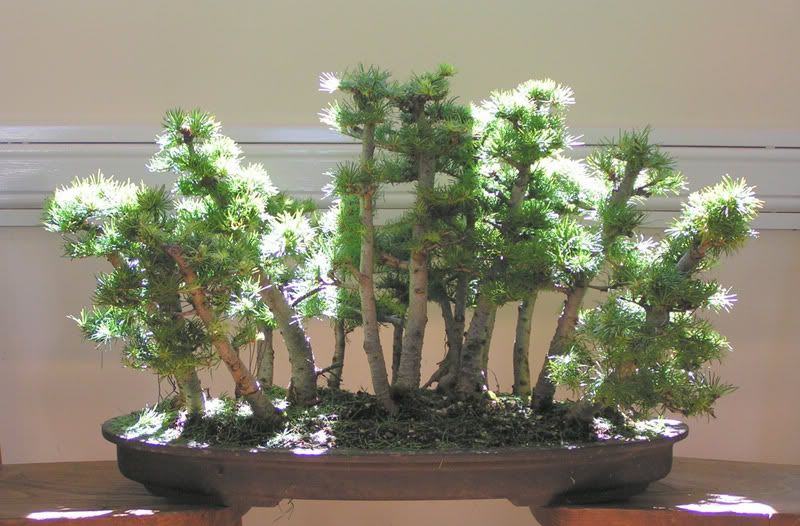 In 2006 while looking for viewing stones in my local river I found a piece of Bog Oak lying in the river presumably washed downstream from the moors. Bog Oak is usually preserved in peat and does not readily rot and can be up to 8000 years old.

Unable to move it for several years, it was great fortune to make friends with Jon Hooper a fellow bonsai grower. I asked him if he would help to lift and move it. He said yes and in 2011, we moved the piece of root end over end up a 10ft riverbank and struggled to put it into a wheelbarrow. It then took a further hour and a half to push it up a hill for a ¼ of a mile.

After letting it dry out for a year I asked North Devon Bonsai club if I could plant the larch group into the piece of wood, during their display last weekend at RHS Rosemoor. They agreed. On the Saturday I spent all day grinding out the left pocket with the help of Jon and the right one being already there naturally.

Sunday saw other NDB members and myself plant it up and here is the finished article. There is more work to be done but I am over joyed with the result. 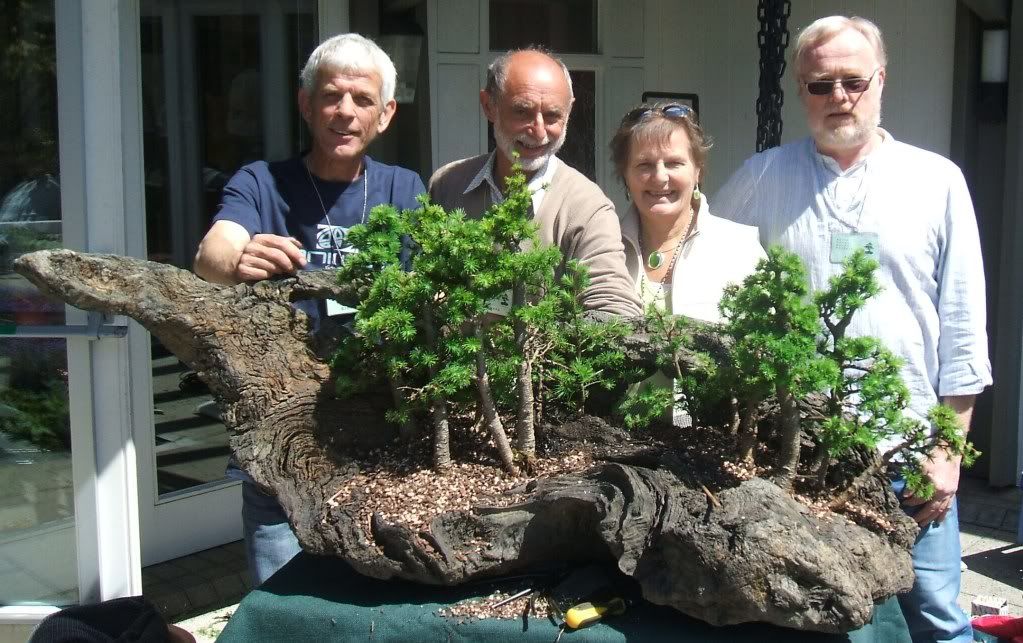 Future plans could be planting Mame trees at the back above the arch. And screwing a black board behind the arches to give a cave like appearance.

Did you go here? https://ibonsaiclub.forumotion.com/t243-tutorial-on-posting-pics

The link worked for me, very nice composition.

Tried the tutorial still did not work blumin computers bad work man and all that.

thanks for the nice coment.

Hi. I have sorted your pics out for you - I think you copied the wrong piece of data but it was easily sorted at this end. Have a look at the tutorial again when you've time - there's a section on how to link to photobucket.

Cracking work - you've made 17 relatively uninspiring trees into something quite different and spectacular. It reminds me of something caycanhvn2012 posted by in his thread. This one

It was in this thread HERE

Just FYI, bogwood do not rot inside the bog because there is no oxygen...out like it is now, it will deteriorate like a regular wood (if not faster) unless it is also petrified.

Hi Nick , thats a lovely bit of work and a great bit of wood. Very dedicated getting that back home. Which one are you in the photo, not the dodgy one on the left anyway

Thank you Fiona, those trees in Thailand were amazing. That one you posted makes me feel small.

I am not in the photo but taking it, the others helped with the planting.

Poink 88 the oak wood is now jet Black al the way through I bored a drainge holw 6 inches 20 mm wide took me twenty mins. also snapped a 6 mm drill in it. It was odd it seemed hard but soft if that makes sence. it is out of the water for over a year and no sign of deteriation.

Nick D wrote:Poink 88 the oak wood is now jet Black al the way through I bored a drainge holw 6 inches 20 mm wide took me twenty mins. also snapped a 6 mm drill in it. It was odd it seemed hard but soft if that makes sence. it is out of the water for over a year and no sign of deteriation.

I used to make pens out of bogwood (Kauri and Oak)...bluish black is the best color and I paid premium money for each 3/4" x 3/4" x 5" pen blanks (as much as $40.00 a piece)...believe me, they are still wood and will eventually deteriorate like one. Sorry for being the bearer of bad news.

hi,
you went collecting with the members of ABBA !

celebrity status trees or what (and I thought I was doing well when George Micheal bought half a dozen trees a few years back!

These old petrified oak trees seem very hard when dry and the outside will just age like deadwood on a tree - I feel the area below the soil though will rot easily as you now have damp, oxygen, soil microbes etc so nature will try to 'compost' the wood. Even though it will be a slow process it will happen exactly as Dario says - if you think about the Mary Rose - the oak is incredibly old but now needs years of preservative treatment because it is in the air. Before the trees establish nicely I'd dismantle it and treat the entire area below the soil line with a very high quality resin and the the outside with a modern penetrating wood preserver, adding several more drainage holes too if tthere is only one, as it will stay quite damp otherwise.

After the work you've put in getting this far its worth doing the last bit properly I reacon.

I agree with Marcus and Dario...It will eventually rot, probably sooner than you expect,because of the living thing on top of it. that is why it is not too wise to fall in love with it so much...but I the good thing about it, is that you got a model now of what container you want. You have time to reproduce this "wood" using colored concrete or some other medium, mostly you can find here in IBC.

I believe no matter what kind of preservative you use, since it is under the soil, it won't last too.

For now consider your creation as temporary art work. And enjoy it...

Very cool! But Larches are very picky about their roots being disturbed after bud break. Maybe wait till next spring to take apart and treat? Either way, I like it a lot!

Thanks all I will wait for dormancy and treat later I thought it may deteriate later. The wood is apoximately 6 inches thick so hope to have it a while.