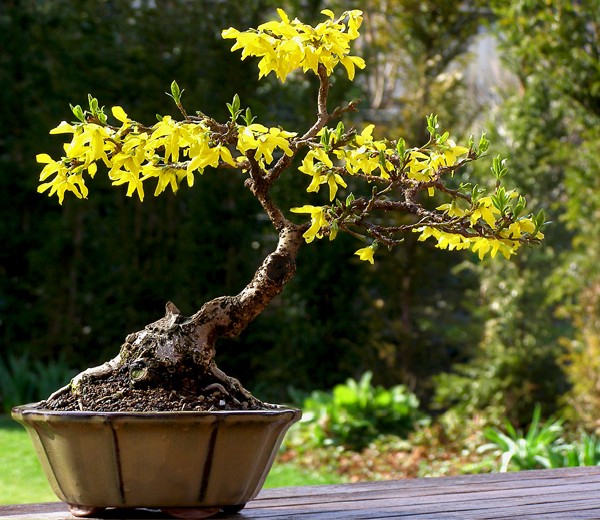 Jaco! This one looks also really great. I like it.

Fiona: never mind!
Sun will come back to Scotland soon. For the eatser days they promise us also some cold days here in my region (lower Rhine river site, near to Düsseldorf) and I should take care for the Shohin that I've repoted during the last days...... To bad!
M

The bizarre Umagashi oak shohin, grown from an acorn 10 years ago, has flowered for the first time. I wonder if it will make acorns? 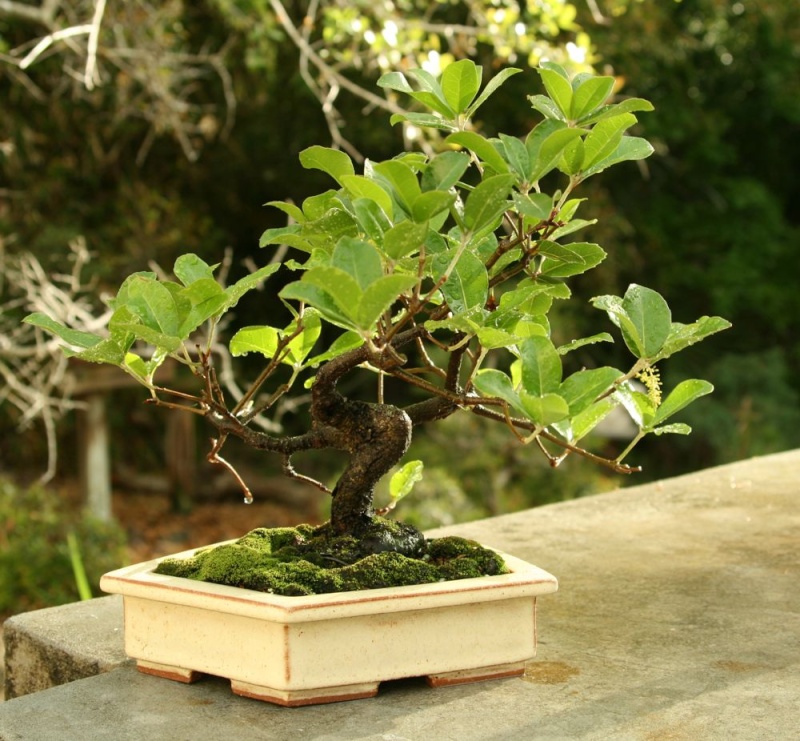 Close up of the inauspicious flower. Lots of pollen in the air though from the other native live oak trees. 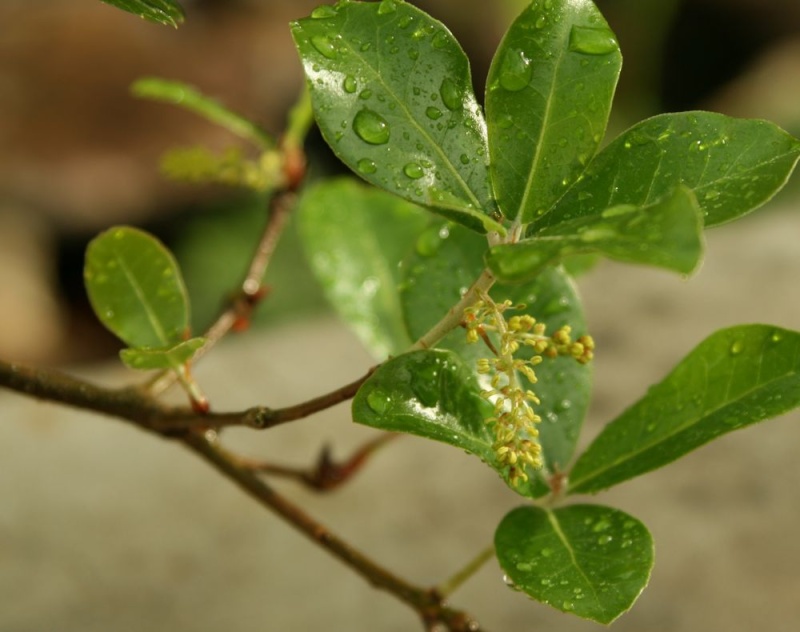 Also the very first tree in this thread, the shohin Dwarf Yaupon Holly, Ilex vomitoria Schillings nana is full of tiny flowers and light green fresh leaves. Trimming and pruning will reduce their size for later in the year. No berries as the tree is sterile. 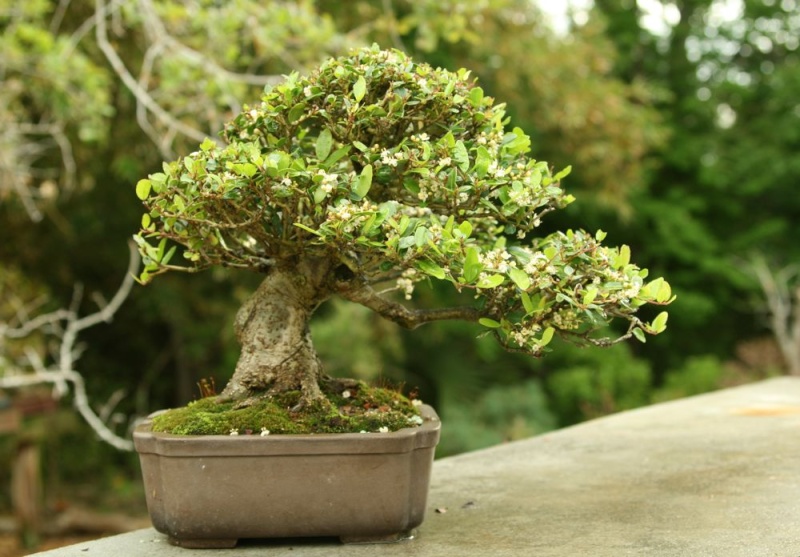 Here's a close up of the flowers. 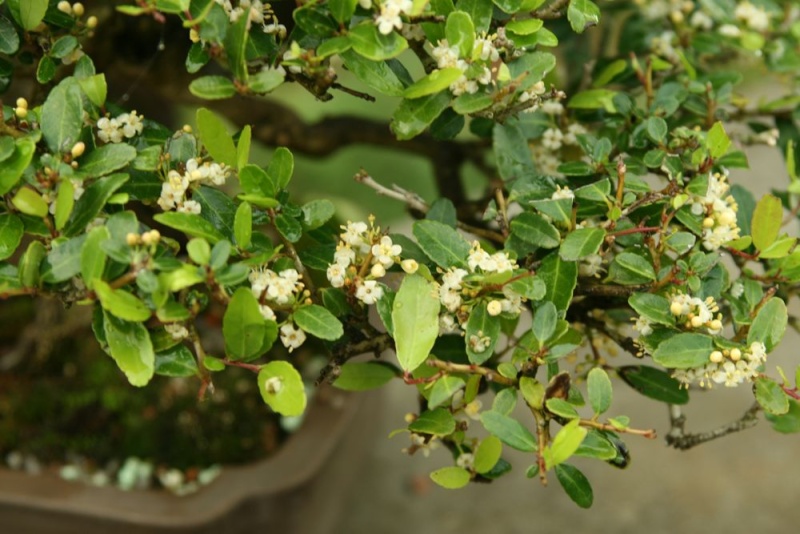 I agree - somehow I thought you'd feel that way. The asymmetry of the pot matches the wildness of the branches.

This shohin Pyracantha looks like it will have lots of berries this fall.
Pot by Sara Rayner. 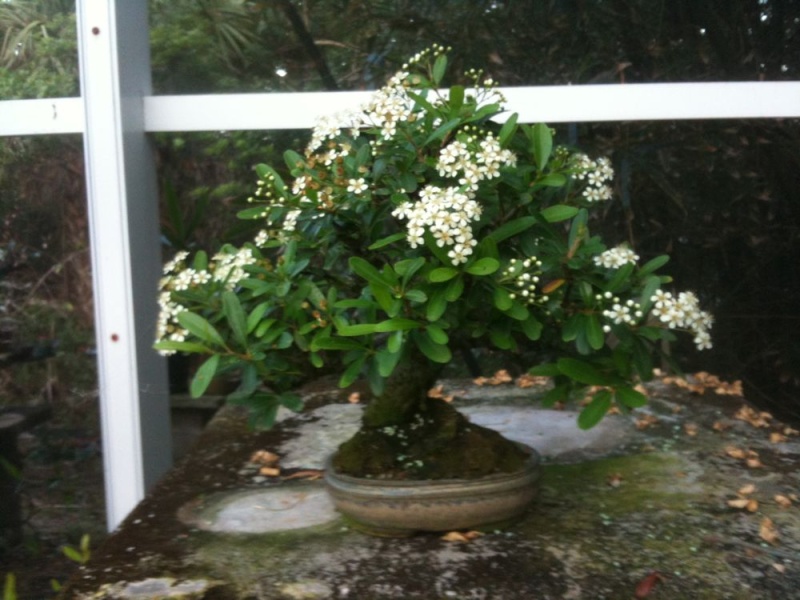 Just to go on with this nice thread.... here are the story of development fom a JBP that I own since the beginnig of 2008.

A old man that traveled a long time ago to Korea brougth it from there and wait many years that his teacher from Korea help him with this tree..... But the teacher never went to Germany and so the guy wait and wait and wait..... until he decide to sell this one (and a few others) and this is the point where I entered "the game"

The pictures shows the tree rigth from the start in springtime 2008 (the long branches with the green far away from the trunk where the first challenge for me) until the last weekend.

Enjoy! And if you got some comments for me (what can I do to improve the tree...) pls. share your tougths with me/us 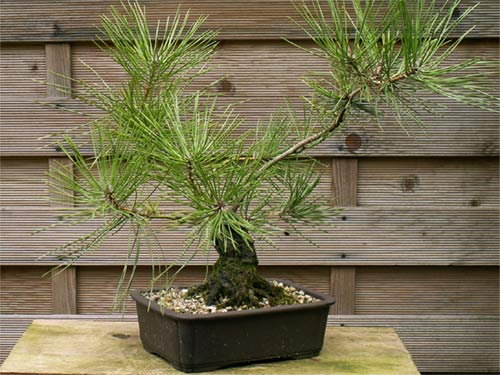 Springtime 2008. The first picture of the tree in my little garden 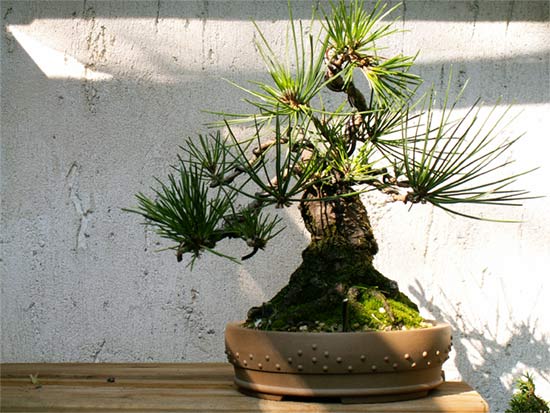 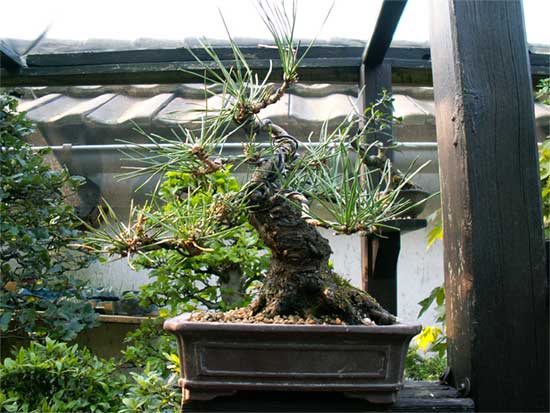 To improve the nebari I decide another angel of planting.

I really like the shape this is taking on, Martin, and I think I prefer it in the rectangular pot. My only comment would be I think it needs a bit more compressing down / foreshortening of the leader in case the apex becomes just too long. Obviously this is only possible if the shoot is still flexible enough to do this.

Sorry - not trying to make fun of your English (which is v. good) but I was also quite amused by you writing "angel" of planting rather than "angle". I rather like the thought that somewhere there is an angel watching over the planting and repotting process. If nothing else, it would be someone to blame if it all goes wrong!

Sorry! And thx. for the hint.

Always the same mistake!
It follows me since my time in school and still (I am 47 years old now) I get it not out of my brain

.
ANGLE I mean ANGLE not ANGEL
(just to give you a short lesson in German: “Angel” is the German word for a fishing rod)


But all in all you are not unsatisfied with my work? Then it is OK for me!

OK. Because of this "ANGEL <-> ANGLE" mistake I surf the hard disk again to find some more pictures to show you some more of my Shohin.

What I found was a Shimpaku cascade and a...a... jepp, such a little....a...."Pfaffenhütchen"?? Maybe someone can help me. A nice tree with red fruit in autumn…..This one is just 8cm and got a very nice ramification. 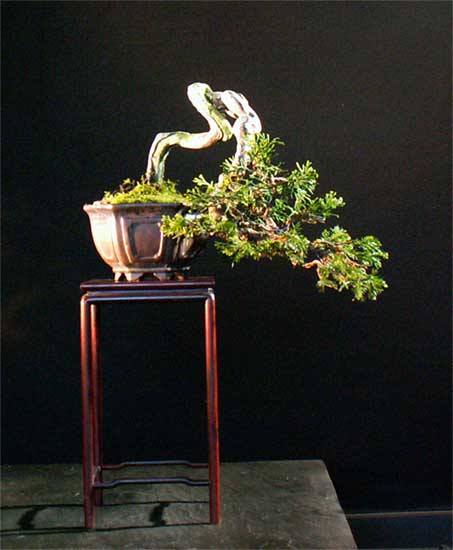 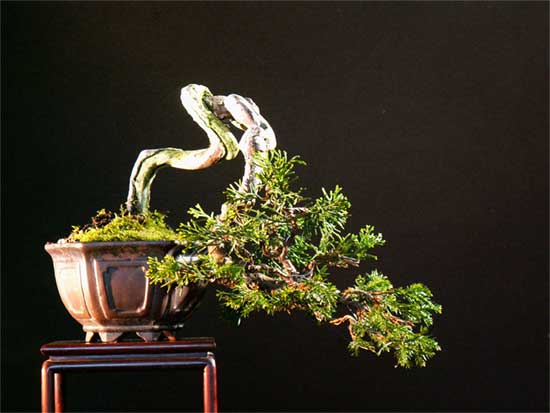 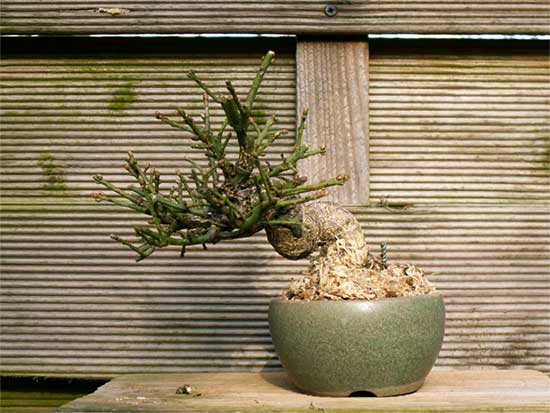 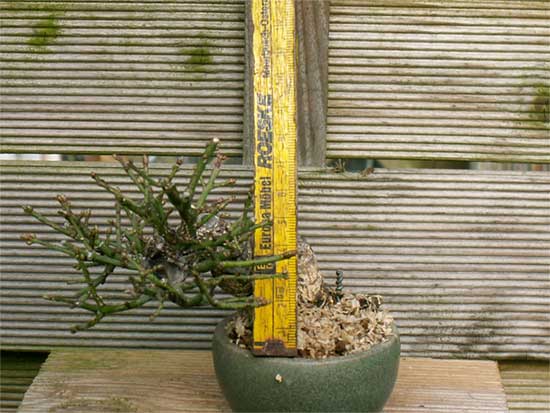 Here with a „Zollstock“ (a “ruler” as far as I know….but what did I really know? Nothing!)

I agree, nice shohin Martin. And my Internet dictionary translated it to Spindle tree.

Spindle.... OK! In each case "euonymous "! Thanks for your quick help!

And yours is a wunderschön spindle, very good work selecting the branches and so on.

Thx. for the compliment Alan, but the spindle is since january in my collection. So the work was done by some other people. I just cut a few branches and repotted the tree in this, maybe three times smaller, pot (Pot form Jürgen Hilken, Germany). But hard root cutting don't mind this tree very much. I should make another picture because the leaves are (just in the moment!) very, very, very,.....(a few more "very"s) small. It looks so nice when you got it on your hand!

Alan, just a quick question: do you know Thierry? He ist a bonsai enthusiast from France and a very nice guy. Also his wife Beatrice works on Bonsai....

Time to up date. 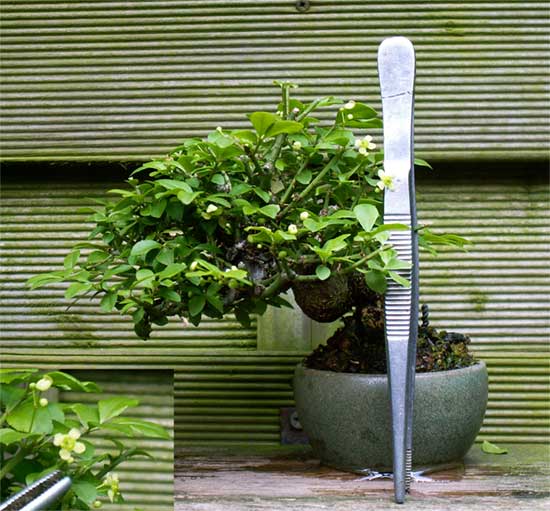 And here are some transformations from my potentillas. It is allways before and after styling 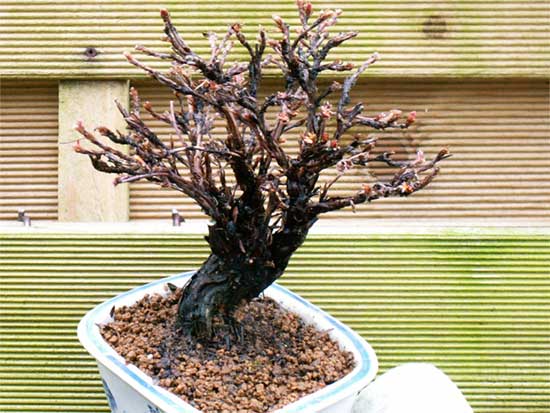 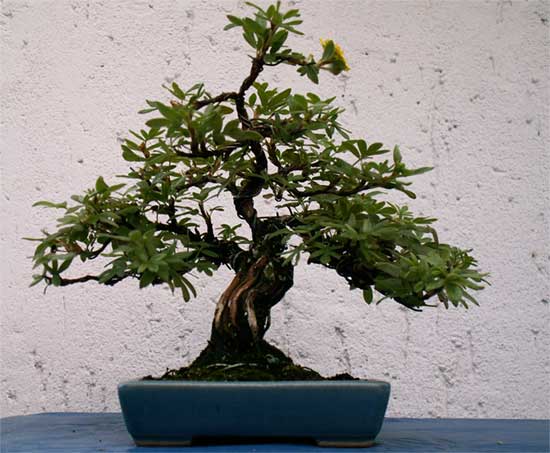 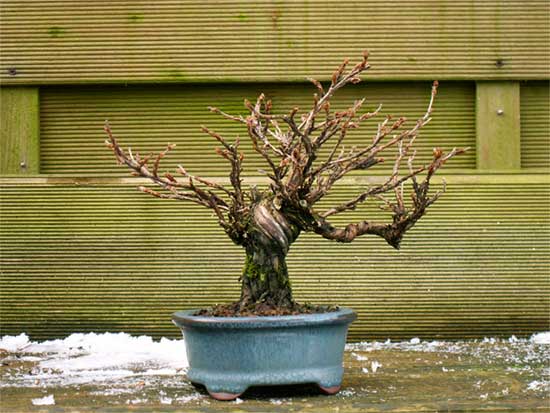 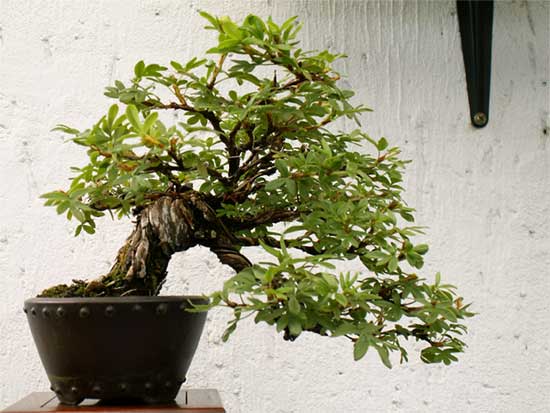 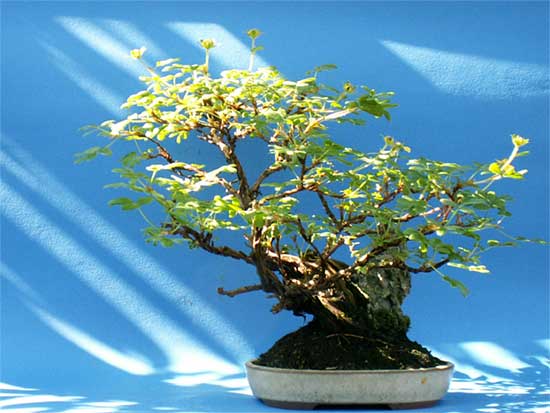 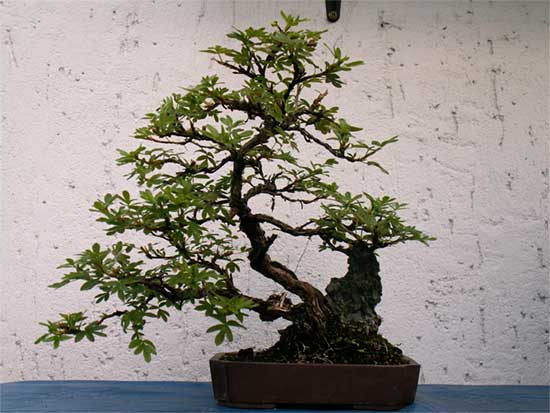 Lovely little guys. The first one looks like Chinese privet to me.
_________________
Jim Lewis - lewisjk@windstream.net - Western NC - People, when Columbus discovered this country, it was plumb full of nuts and berries. And I'm right here to tell you the berries are just about all gone. Uncle Dave Macon, old-time country musician

So you think my "Paffenhütchen" (see posts before) are for real a Chinese privet? Or is that the same? I'am approx. 25 years with bonsai, but I'am still a botanical doofy.....

Lovely trees Martin. Thank you for sharing them. Your "Paffenhütchen" looks more like a Euonymus to me. Likely its Euonymus europaeus. The flowers are telling.

Thank you again for sharing your shohin,
David B.

Thank you Rob, and you All for sharing yours beautiful Shohin, here in my Nerifolia, Suthin work on many yars ago 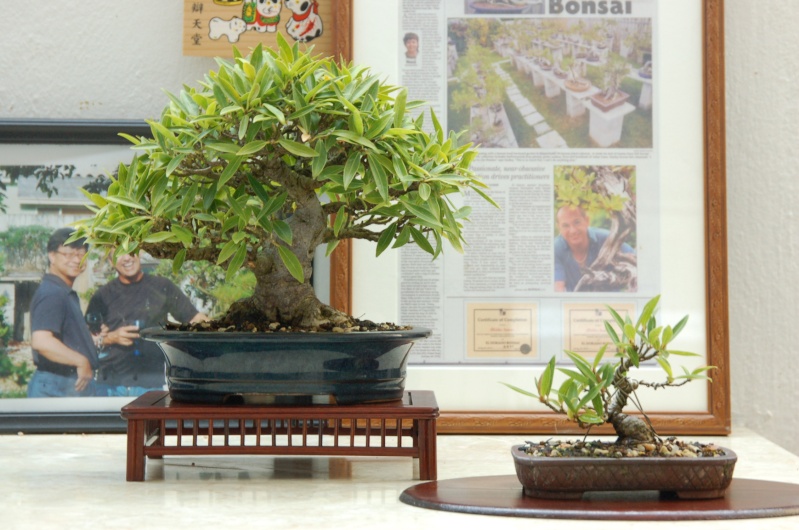 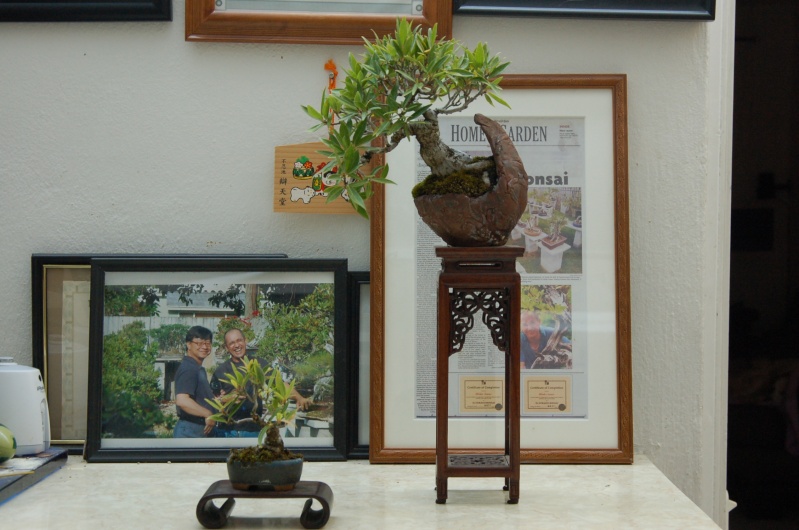 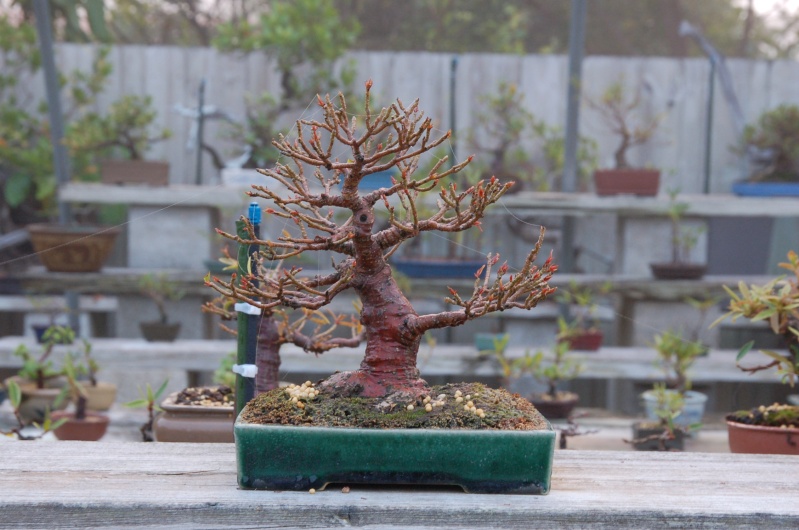 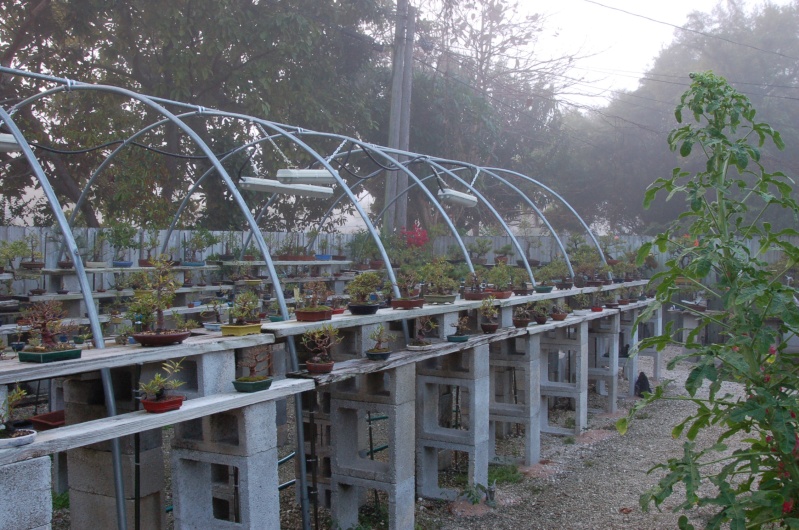 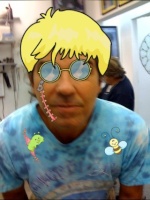 Hey Al, nice to hear from you. The shohin look great. I think you don't have enough and need a few more.

While I really like Willow Leaf Ficus (F. nerifolia ) I have been trying to add some species variety to my shohin collection. Here are few new (to me) species in work

The first is a Pink Trumpet Tree, tabeuia which has fairly large leaves but I am giving it a shot as a shohin. I can always show it defoliated. Pot by Dale Cochoy of Ohio. 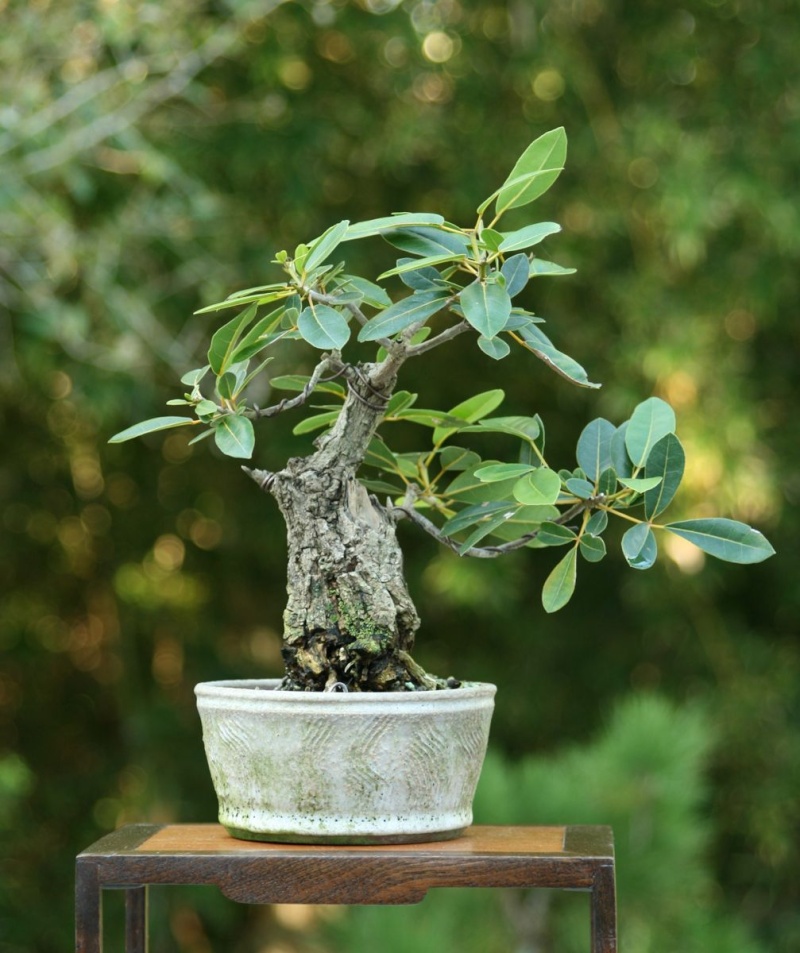 The next is a Clerodenrum in work less than one year. I don't know the common name but I am curious to see if it will make flowers like the house plant types. Fast growing specimen came from Puerto Rico along with the Tabeuia. Generic Japanese pot. 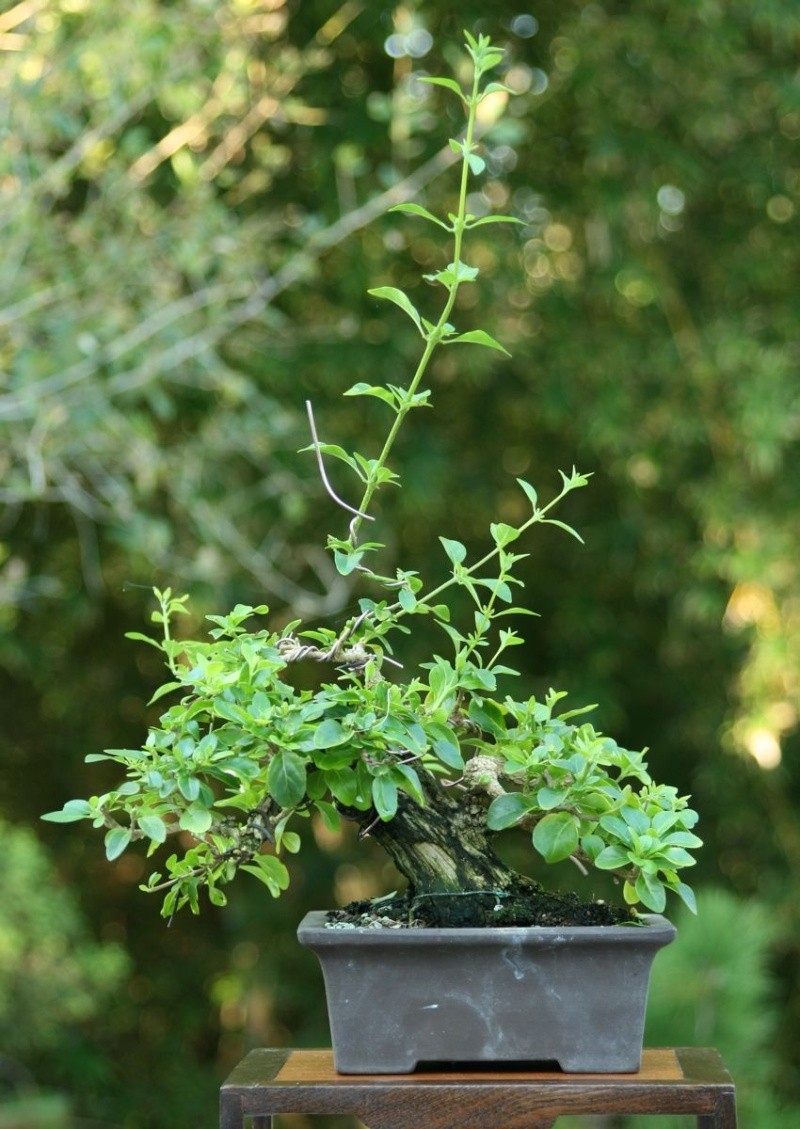 Next are two Nea buxifolia. We call them simply Nea. The first was shown at the US National Exhibition this past spring in my shohin display.
Pot by Castle Pottery in Brooklyn NY. While Nea started in Puerto Rico as a bonsai, these two were actually started as cuttings by Jim Smith. I like the little one in that the trunk has some motion. Nea in the wild normally grow very straight. 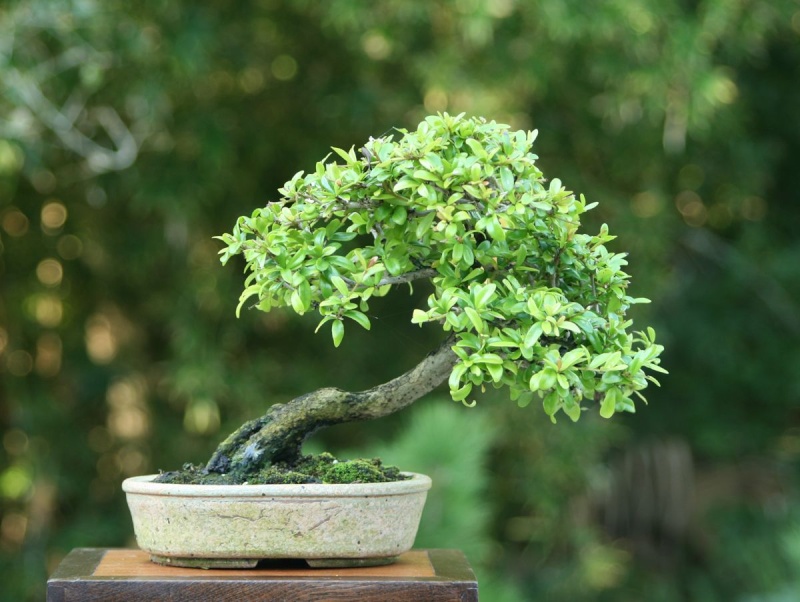 The second Nea was entered in the Knowledge of Bonsai progressive styling competition last year. I never saw the results of the competition, but my tree has filled in rather well. The pot is by Dick Reyerson of California. 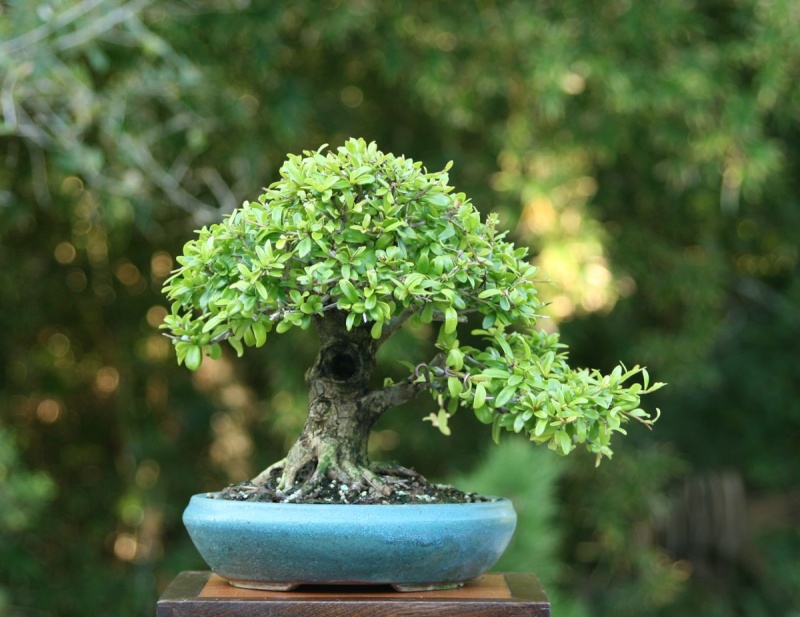 This is bonsai! Dedicated work on the long road, whitout easy shortcuts. Thank you for the inspiration and some very good pieces there.

Hi Rob, Thank you yes I do think the Brazilian going Bananas. I do need a little more

the last two Nea is a master piece congrat. I need you and Morten, to sign My Book. Thanks again Al

Similar topics
» Hawthorns on Parade
» Photos from the British Shohin Association’s 'Shohin Off' weekend event 2011
» Shohin off my Box!!
» Some of My Shohin
» Shohin Box