I discovered a taxus whip growing next to a large established one in my yard. I dug it up and potted it in a training pot and was attempting to put some shape into the trunk. Looks like I have split the bark in one place trying to wire it. Should I just let it recover from this trauma and for how long? Will it recover? By the way, i went ahead and cut the wire off as it looked like it was further harming the trunk. Thanks

decided to try some guy wires

instead of persisting in my efforts to wire this taxus whip I figured I would use some guy wires instead. Before you all make fun of my distorted pot (looks bad i know) just remember I was not originally going to use guy wires and so the rigidity of the pot was not an issue. At any rate, you can see on one of the photos that the bark on the upper portion of the trunk is all muffed up as I had described earlier. Any suggestions on how to put some movement in this trunk without further damaging the tree would be appreciated. Be gentle. I'm new. 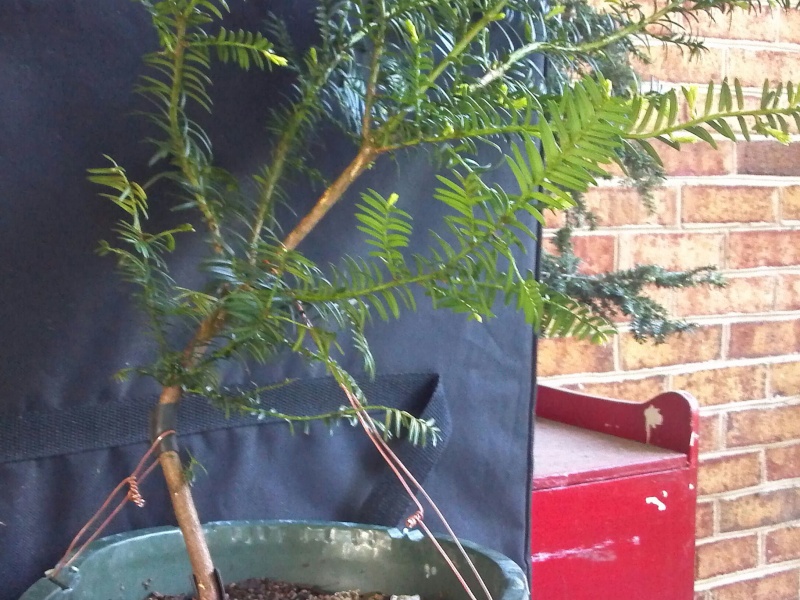 Do you have photos?

here is a photo of the area of the upper trunk that was damaged by the wire. Maybe I used too heavy gauge of wire. Maybe smaller gauge double wired would have been better? I am able to get a good bit of movement in the trunk using the guy wires but that still leaves the upper portion that really needs to be re-directed. 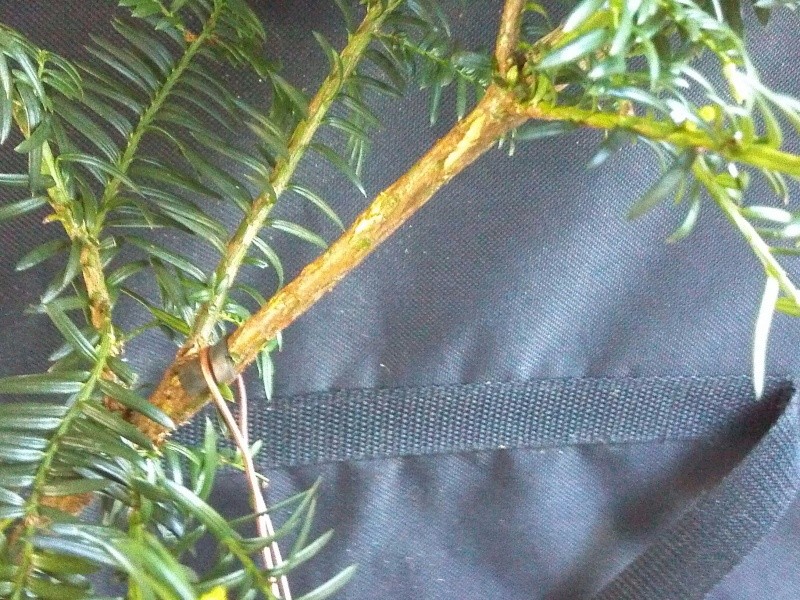 Decided to go with the guy wires to help shape the trunk of my new Taxus so got the wiring cleaned up and set. I guess I will wait until later to wire the top 1/3 of the tree given the problems with the bark slipping. If anyone is aware of where I can find information regarding how to shape young trees I would appreciate it. I know this is not a sexy topic but I am turning to the IBC Forum since I am unable to locate information elsewhere. Many thanks 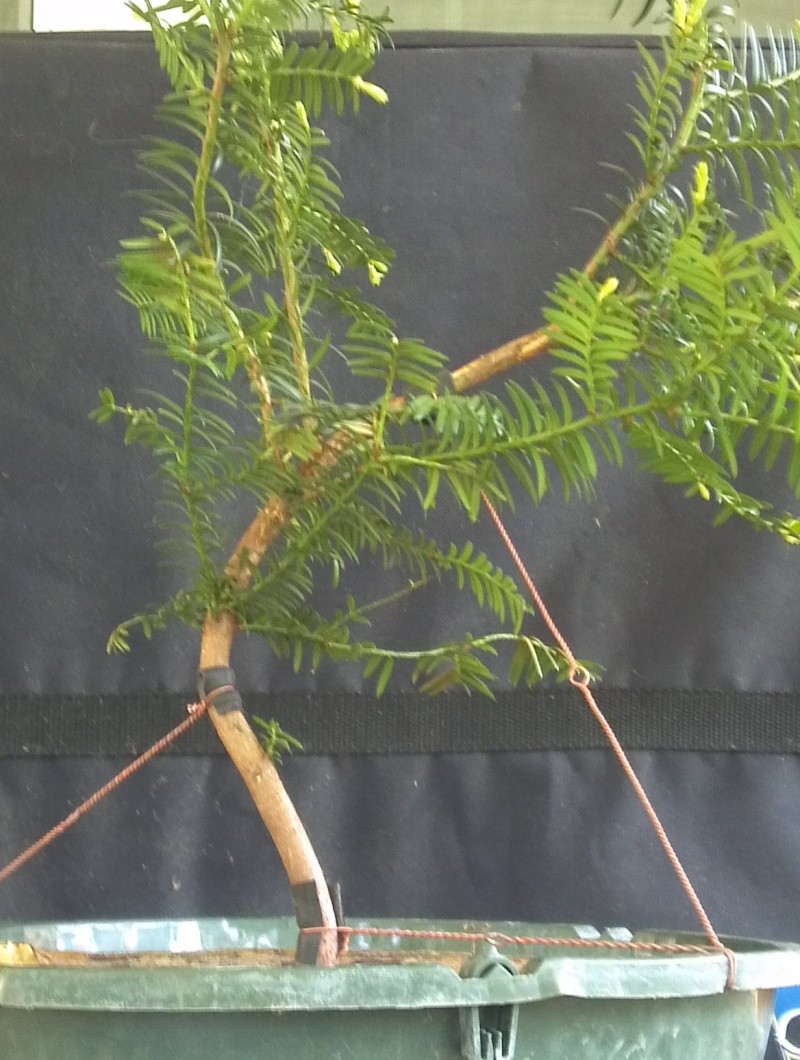 I think it will be fine, maybe keep an eye on the point where the wire wraps the trunk even with the rubber protecting. The existing damage looks pretty minimal so would worry about that. Other than that I would leave it be and let it grow wild for a few years at least. Good luck with it.

thanks Jim, appreciate the advice. Do you agree with my trying to put some basic shape into the trunk now? My theory was to catch it while it was still small enough to bend. It was straight as an arrow.

Sorry for the delayed reply, I am out of town for work. I think it is fine to give some shape now. You can do some of that too by selecting new leaders as it grows. I think ultimately it's shape will be determined later as the tree developes and then you can do some extreme bending techniques if needed. Good luck with it.

hi,
if you cut off everything above the second wire you will end up with a much better tree in the future. I'd keep the stub just as the anchor point for the guy wire until the trunk has set, then there are loads of branches lower down, and more will form, to make the bonsai from.

Hello Kenp,
Nice material to start a bonsai.
4 years ago i potted a similar seedling out of my garden and positioned the roots as this is difficult to correct later on.
As it was already woody i had the same difficulty but in stages over a few years, i got some movement into the trunk with wiring.
Roots and trunk movement should be defined now at the start, later it will be almost impossible.
Here is a picture from today, it is recently repotted.
At the lower part there was a damage from initial wiring, as you see it healed already quit good, it ads some extra to the nerbari.
Looking at the trunk thickness of your taxus, an option would be to leave the upper leader for a while longer to get some more girth.
After that the next step is to get more girth on the trunk with lower branches, the top part should not
get to thick and the trunk taper will be better that way.
At the picture you see that the tree is cut back, specially the top and some bigger branches, they are replaced by younger ones,
this season the lower branches have the opportunity to get more growth.
Sunip

Thank you Sunip and Marcus. I appreciate you taking time to impart some of your expertise. I have gotten great advice here on the forum. I was looking at all of the growth on the top of this tree and wondered if I should cut it off. So now I have my answer. I look forward to following the progress on your Taxus Sunip. Thanks again to both of you.