A couple of water stones

A couple of water stones

I took a few pictures on my water stones on my bonsai benches. Please share your comments.
Collected from a construction site in Charlottesville, VA: 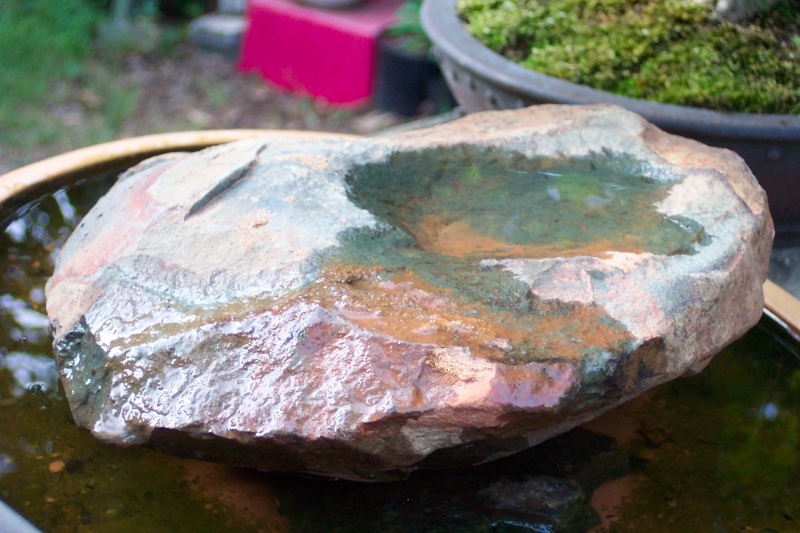 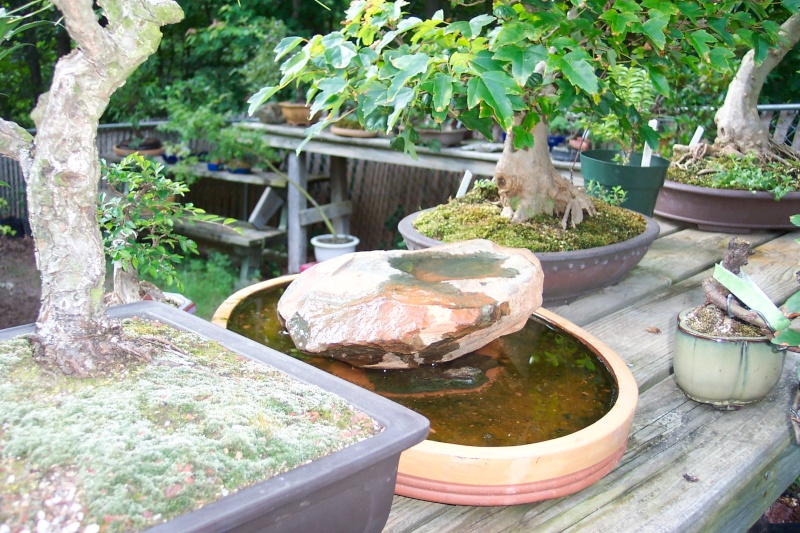 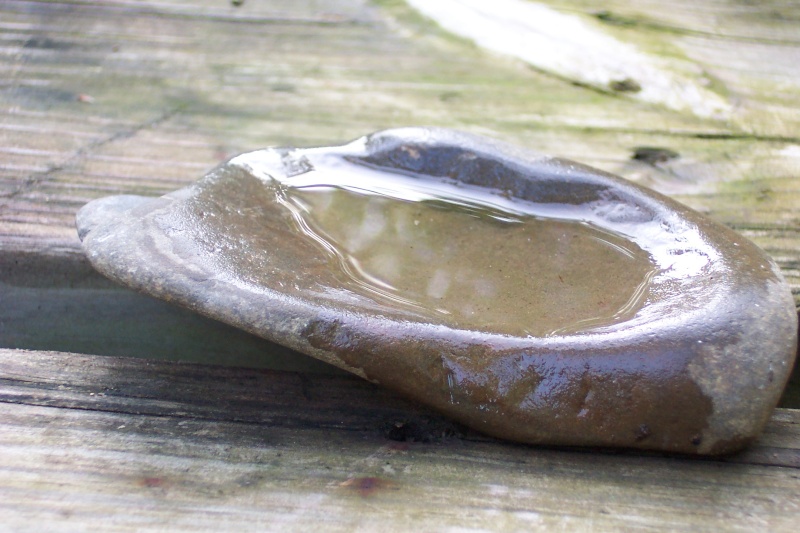 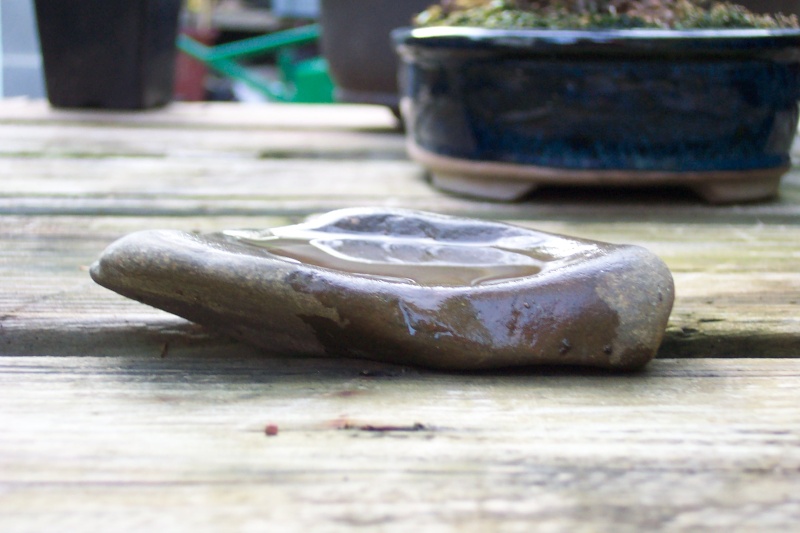 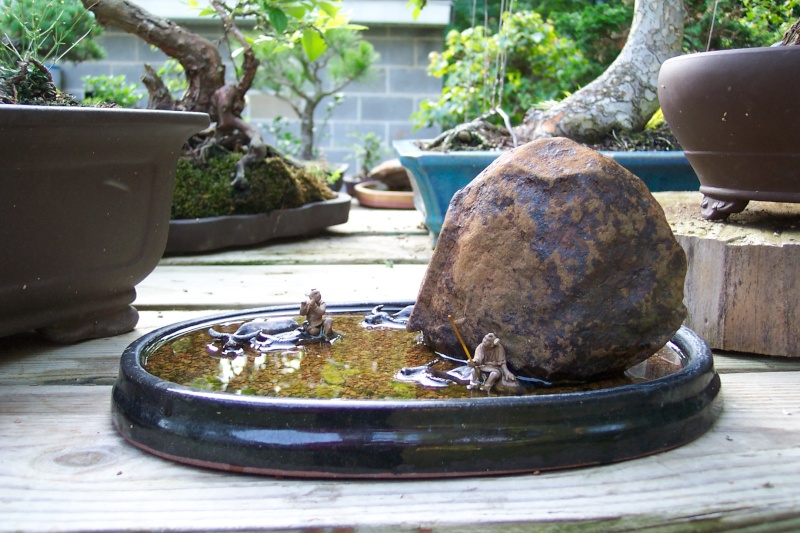 I don't know enough to give a worthy comment - except to say that I LOVE the second one!

Hi Todd,
The first stone seems to have a nice color, the pictures are not that good though.
From the pictures, i like the second one most, why you do not place this one in a suiban
or under a suitable bonsai in a pot?
regards, Sunip

Thank you guys. Yes, a suiban or planted with a tree would be best.

The first stone does not really interest me, if looking at it, with suisekieyes. The knokoffs is too resent, they have to be so old, they just look, as if the stone had this shape for ever.

The next one is a darling. If you are not into suiseki, and want to exhibit it in a suiban. It would be nice, to exhibit the cleaned stone together with a bonsai in a display, as it is elegant, and speaks gently towards on direction....with a little water in it, it would look nice.

The last stone, is nice in the tray with the small fishermen....cute gardendisplay.

Hi Todd... As illustrated, the second stone is striking. It has a gentle contour with advantages of weathering, little (if any) staining, and apt expression.

Displayed in a suiban by-itself, it can be appreciated for the slow evaporation of water on its surface. It might suggest a lake at the foot of a gently rising mountain. For other viewers, the waterpool stone (mizutamari-ishi) will suggest another scene (or object). Allowing the stone several "views," simultaneously, can increase layers of feeling. Alternatively, a poetic name which is particularly revealing can transform appreciation. For reasons often argued, poetic naming should be rare.

Appreciating the change of scene during slow evaporation of water (mizumoshi) is especially valued in intimate alcove display of suiseki in Japan. Mizumoshi is among many aspects of suiseki appreciation which lean more toward naturalness than formality. The rate of evaporation can be greatly slowed by encouraging an aged skin on the stone.

"Evaporation" was noted among stones on the recently posted Meihinten thread. A stone with some similarity to yours had the addition of a small crab figurine placed upon it. The crab figurine limited what the viewer might imagine to a seashore scene of limited size.

In a suiban, waterpool suiseki are best placed with water overflowing somewhere off of its front or visible (from the front) side. The direction of the water's flow determines proper placement (relative to visual flow) in the suiban & in relation to other objects in arrangement. This stone has a strong visual flow based on its contour, but follow the flow of water (or even imagined "flow" if the stone is dry) rather than the stone's contour to appreciate the stone as suiseki. As with any learned response, some enthusiasts will intentionally reject it.

Of course, you might appreciate your stone in any way you like, but there is discipline associated with suiseki that arguably increases appreciation if you allow it. Disciplined suiseki practice puts you in a communion with owners that share expression arising from humility, which is different than expression originating from solely personal taste. Arguably, the best expression begins with humility & extends to subtle surprise that extends with no bounds & includes a subtle reading between the host & guest(s). There is not an exacting right & wrong, but there are many considerations.

A few stone collectors gathered, yesterday, and only returned late in the evening from a long drive. We were in Virginia mountains closer to you than me. The water was still too deep, but we each found a few stones for play and to explore our passion.

Glenn Reusch (with foam-noodle raft) and Ponder Henley. Ponder appears to be standing a few feet this side of an old Indian fish-trap... 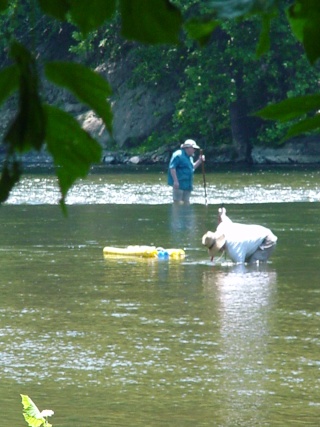 Yvonne and Chris thank you for your comments and insight. Yvonne, always learn from your posts and I'm glad you like my bufflo riders.

Chris, there is much to learn about suiseki and thank you for sharing your expertise. I am glad to have found this stone and will cherish it. I have only found these two in my travels and try to keep my eyes open every time we go to the rivers and creeks.
What type of suiban would you suggest for this stone? Glazed? Unglazed? Glossy? Satin? Color?
Thank you,
Todd

For your lovely stone. To me, a VERY low, oval, fine textured, and a thin, not glossy dark brown glazed suiban, would look nice.

Your stone looks to me, like the collour is more to the red side, than to the yellow side......if this is so, the brown collour of the pot should be to the red side too, and the sand must not look yellow.

I look forward to see, if other readers will come up with a suggestion.
Good luck with your choise, and please send a photo, if, and when you have it ready.

You might consider these options of placement in a suiban, Todd. There is one that I much prefer & another that I would choose as second... but any could be defended as apt expressions.

Do the blue lines represent where the water level should be? Thus, allowing for the perimeters of the stone to represent mountain ranges, hills, or other illusions of landscape?
Todd

Hi Todd... I would choose a watery blue suiban (and will explain further in another post). Therefore, the lighter blue-gray rectangles represent the wall of a suggested suiban. Sorry, I did not add the feet which would make it clearer.

The bright blue line suggest where water might puddle if you manipulated, the stone at a higher front angle. Where the pool occurs can influence placement. I have conflated seeing the pool from slightly above by lowering the front edge of the stone. It is confusing, but perhaps you can catch the drift of stone, water and suiban placement.

I apologize in advance for the length of this post, and my rambling... :-(

Re' option of color, I'd prefer the watery blue-side of the color spectrum to the earthy red-side or the commonly encountered off-white. This stone is very closely associated with water. If properly aged over time, it will be mostly associated with slow evaporation across it surface as well as the surface of the sand. You will feel the most subtle elements (open space and wetness) as strongly as the stone, sand & suiban.

A repeated color can be elegant, but it is a rare choice. I recall one black stone in a black, glazed suiban among myriad displays of black stones. A black suiban is as likely to be chosen for atmospheric allusion ("night scene" or "colorless-winter season") as for color-match. A brown-glazed suiban is seen with suiseki of similar hue, but I would look to the composition for the choice related more to atmosphere.

While unglazed brown suiban are very commonly sold, they are not commonly seen in Japanese suiseki exhibits. I'd be interested in an explanation. Since suiban are not so commonly available, we use what we have. Many enthusiasts have unglazed suiban, white-glazed suiban & blue or green-glazed suiban. Yvonne's advice to choose a glazed suiban would be mine, too. For a new stone a bright suiban is warranted. A suiseki with an aged skin should be placed in a suiban with aged patina.

Suiban hue (red-to-blue color scale) and saturation (color intensity) are your choice and should reflect your style or style recognized by the audience you are hosting. Your best reflection is as a thoughtful host. Feeling is more important than technique in suiban choice & stone placement. Reasons for choice are often not obvious. Respect for (balance of) discipline & creativity shared between a cultivated host & guest might be essential. Your choices will be appreciated for your consideration in the choosing.

In February 2000, Jim Hayes gave a beautiful North American stone to Arishige Matsuura as a gift. Larry & Nina Ragle added a subtly glazed suiban crafted by Sara Rayner along with selected California sand. When Mr. Matsuura displayed the gift in the alcove of his home a few days later, he replaced the suiban with a light blue suiban very similar to the suiban you noted at the Meihinten exhibition, Todd. He stated that the stone did not appear "aged" and needed the light blue suiban for harmony.

Many historically important suiseki are associated with a particular suiban. The stone Gabisan is associated by Nippon uiseki Association as mounted in one tray, while in Japan's Aiseki Kai publications it is consistently illustrated in another surprising container. In texts of a particular owner's suiseki collection, many stones might be chosen for illustration with repeated use of the same suiban. For suiseki exhibits in Japan, a suiban can be borrowed or rented-- thus, different owners stones might be seen in different exhibitions in the same suiban.

I've seen a bright salmon-pink color suiban with a grey stone in a Meihinten exhibition and wondered at the choice. Some choices are so common that they hardly seem a careful pairing. Off-white glazed suiban are commonly recommended and are suitable with a wide variety of stones.

Would anyone deny the wooden trays used to display stones as suiseki in a World War II Japanese internment camp any less appropriate than the finest doban. FWIW, doban (literally, "copper/bronze/red-metal plates") are a subset of the class of objects known as suiban (" 'water plates'/trays) which also includes ceramic trays used to display stones. All doban are suiban, as well.

In regard to suiban shape, your stone has soft contours and a more oval than rectangular perimeter, Todd. The most appropriate oval would allow more open space around the stone than a rectangular suiban covering the same area. At least as important is the suiban's front-to-back depth compared to its side-to-side length. Either an oval or rectanglar suiban could work, with consideration of empty space that avoids pinching among distinguishing factors. A rounded (or notched) corner rectangle can accommodate a broad variety of shapes and arguably preclude conflicts in repeating the most common shapes among objects competing for attention.

Yvonne suggests a shallow suiban. I would suggest a suiban depth that allows the stone no overhang above the sand as long as the bottom of the water pool remains above the level of the sand. The stone should arguably not be placed like a boat stone floating on top of the sand if representing a lake scene rather than a boat scene.