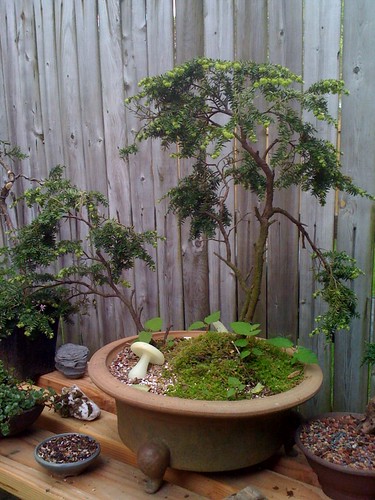 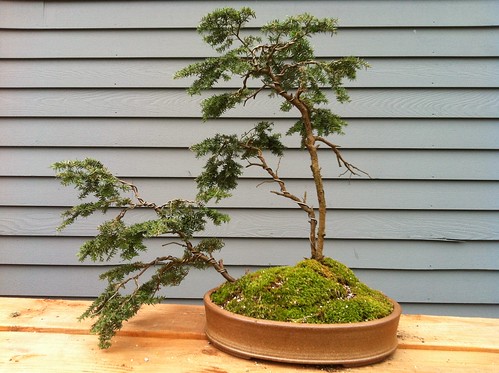 Overall, I like the trees and their styling as well. I don't know where you are going with this tree and I only see one angle of it so forgive me offering unsolicited feedback. The constructive critique I would offer is that it seems that right now a there is a 'soft' attempt at a wind-swept grouping on a hill. In my opinion this overall impression (if that is what you are going for) could be strengthened by taking a couple of the upper branches of the main 'tree' and wiring them to the left or at least making them appear to be in an ongoing fight with the wind. There are plenty of threads about windswept trees and the fact that you can have trunks and branches going into the wind in nature, but in your arrangement it seems a more convincing windswept styling could be accomplished with relative ease. Just a thought and keep in mind it is coming from a bonsai-noob. Others with more experience may tell you I'm way off base in my suggestion and if that be the case I will learn from it.

Once again, very pleasing tree and pot combo in my opinion. I love the 'grassy hill' the trees are perched upon.

I like how you restyled your hemlock and the new pot really sets it off and makes a nice composition. I like the old pot that the Hemlock was in (not for the hemlock) too. Where did you get it?
Best,
Todd

The pot in the first picture is a much older Nick Lenz pot. It was collected somewhere north of Connecticut.

I have two inputs that really won't change the composition by much.

1. The lowest branch on the far left tree seems a little heavy. I was kind of visualizing it in my head, and it might look good if you jin it.

In a natural setting, the lower branches of your other trees have withered and deadwood exposed from strong winds, lack of light, and probably fungus attacking the weaker limbs. So, to be consistent with the other trees, it might be convincing enough to jin the lowest branch of your third tree.

2. The pot is great, and probably fine for now (for root development). But when it comes time to show the tree, I would prefer a more longer and shallower pot (while maintaining the soil mound depicting a hill). I think it will be a stunner in a pot like that.