Arthur, that is indeed a very good point!

And David, please don't apologize. This is a great thread, and thank God for something new. Whether we all agree or not doesn't really matter, and I don't think any of us take it that seriously anyway. And who'd want to belong to a forum where we all agreed on everything all the time? How much more boring could that possibly be? These differences of opinions and thought are how we all learn, and I'm grateful for them.

AJ wrote:You know, if you call them "Tray Landscapes" you don't have to worry about all the rest of it.

Very good point.
And by the way, i love the landscape you posted: is it your creation? What is the yellow part of the "field" made of? It contrasts so well with the dark green of the main tree, I've always wanted to make "trayscapes", it would be a very nice species to use when I eventually try to make one.

I agree with the way that the discussion is going after all as one famous Japanese potter said 'if you think too much the work is all the worst for it, just let your hands move and some how a pot is formed', the same can be said for Saikei/Pen-Jing. As I often tell students the sole purpose of technique is to make creativity possible, so lets concentrate on the beauty of the landscape rather than trying to label it.

so lets concentrate on the beauty of the landscape rather than trying to label it.

I 100% agree with you, individuals I teach Saikei too often ask what is the definition of Saikei and how does it differ from other landscape forms and I agree this is just human nature. It was just a personal opinion of mine.

Had a little free time today so sat and enjoyed the Scottish sunshine (no, that's not a contradiction in terms - at least not always) while putting together this: 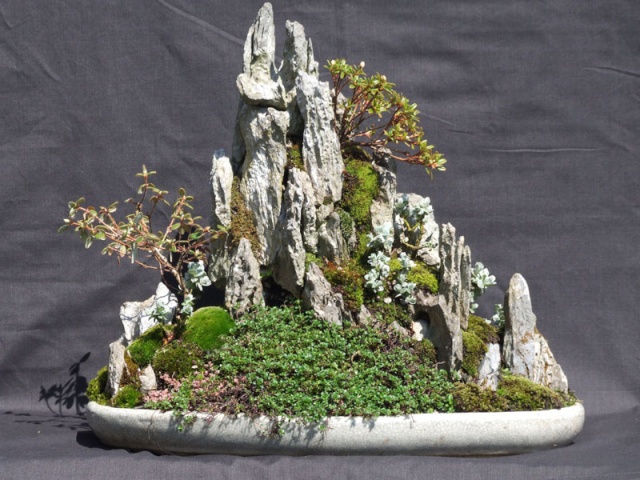 The top plant is Rhododendron megeratum "Bodnant", the lower is another Rhododendron species whose label I have mislaid. The rest are Salix boydii - a good Scottish plant that I had to go to North Wales to buy! In fact, if you'll forgive the blatant advertising, all the plants came from Aberconwy nursery that I visited last summer. The Rhoddies need a bit of filling out, especially the lower one, but this should happen quickly. Both are lower hummock-forming species, and I am hoping this will help give the image of rhoddies growing for real in many a Scottish landscape.

Lovely. Is that one rock, or several fixed together? 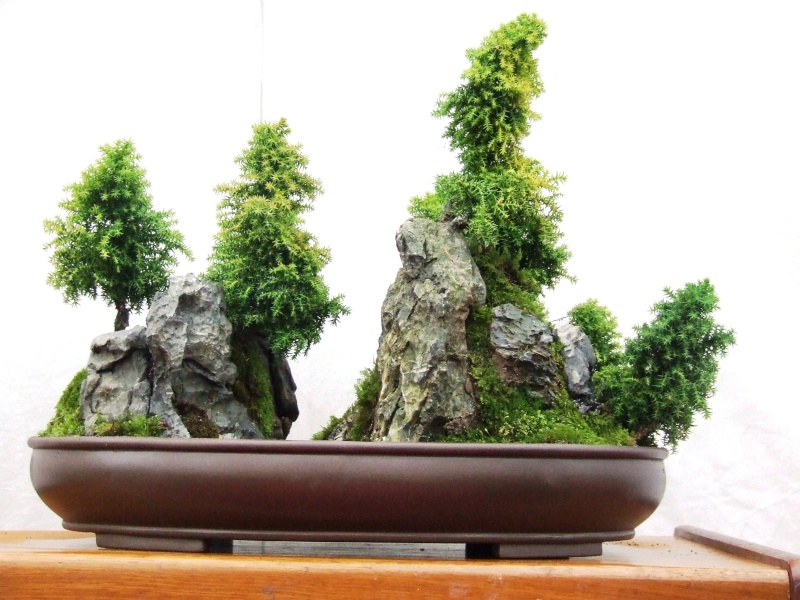 I want to upload some pictures how do I do it

David - follow the instructions you find by clicking HERE


Jim - it's several rocks stuck together vertically. I must confess that I acquired the rocks "ready made" from some bonsai acquaintances. I usually use a sillicon based fixer when I do rocks myself, but my friends used a cement. So while it's only about 18inches tall by 20inches broad, it's ruddy heavy.

It's also cemented on to its pot - one I'm not over fond of. I was tempted to change it but it would have meant smashing it off which I decided I wasn't going to risk. The thyme and sedum will overgrow it soon anyway.

David - are those hemlocks? I can't quite make them out in your pic.

Fiona,
I really like your planting. Are the rocks limestone?
I don't believe the trees in David's arrangement are hemlocks.
G

RE Trees in Saikei

The trees in my Saikei are Cryptomeria japonica 'Yokohama', I tend to use a lot of Cryptomeria in my work as I find they are idealy suited to Saikei.

That was my next suggestion.

AJ wrote:You know, if you call them "Tray Landscapes" you don't have to worry about all the rest of it.

Very good point.
And by the way, i love the landscape you posted: is it your creation? What is the yellow part of the "field" made of? It contrasts so well with the dark green of the main tree, I've always wanted to make "trayscapes", it would be a very nice species to use when I eventually try to make one.

Alain - The tray landscape in the photo is one I put together in a demonstration a couple of years ago. It is substantially different in concept and feeling than the tray landscapes I usually do, because it is purposefully non-naturalistic. The main tree is a Dwarf Hinoki, and the yellow ground cover is a sedum called 'Ogon'. I'm glad you enjoy it.

On the subject of by what name we refer to these types of plantings, I can't agree that it does not matter. Saikei is a specific type of creation, originated and popularized by Mr. Toshio Kawamoto (I've been told that the term 'saikei' is a registered trademark, but I've not been able to verify that.) Saikei was not intended to be a catch-all phrase to describe all miniaturized potted landscape plantings. According to Mr. Kawamoto, saikei were to be done a certain way and for a certain purpose. I don't strictly follow Mr. Kawamoto's teachings, so it would be wrong for me to call the tray landscapes I make saikei.

Landscape penjing are noticeably different from saikei. I enjoy landscape penjing, especially the work of Mr. Qingquan Zhao who has been a great influence on my thinking regarding tray landscapes. I would never claim to be a student of penjing, however, and really can't speak with any authority on that subject. That's why I would never say that the tray landscapes I make are penjing landscapes. If I can't define exactly what makes a penjing landscape what it is, I can't possibly create one, except by accident.

As I understand it, the Japanese term for miniaturized potted landscape plantings, that are not mono-culture group plantings, is bonkei. I've read in some sources that bonkei are miniature landscapes made of stone, that include no plant material, but I don't think that definition is correct. At least according to Mr. Yuji Yoshimura's book, "The Japanese Art of Miniature Trees and Landscapes", that definition is not correct. About bonkei he wrote:

"Here the aim is to create a realistic landscape seen through the wrong end of a telescope. Various materials are used - trees, grasses, rocks, sand, and the like, as found in nature, and some persons go on to add tiny figures of people, animals, houses, bridges, waterfalls, and the like, though it is our opinion that these frills are not needed with a good bonkei; in fact they detract from its effectiveness."

Because Mr. Yoshimura's book was specifically intended for an English speaking, non-Japanese audience, he provided a translated term to use instead of bonkei - "Tray Landscape".

So, if Mr. Yoshimura said it, does that make it correct? Not always, but often enough.

Because I'm American, and because the audience for my work and the people I teach about bonsai are mostly English speaking, I want to use words that they can understand. With the exception of the word "bonsai" itself, it is not necessary to use any Japanese words to communicate about bonsai to a non-Japanese speaking audience. Of course you can use them if you like, and many bonsai people do, but they are not really necessary.

Too many words in this post. Here's a picture: 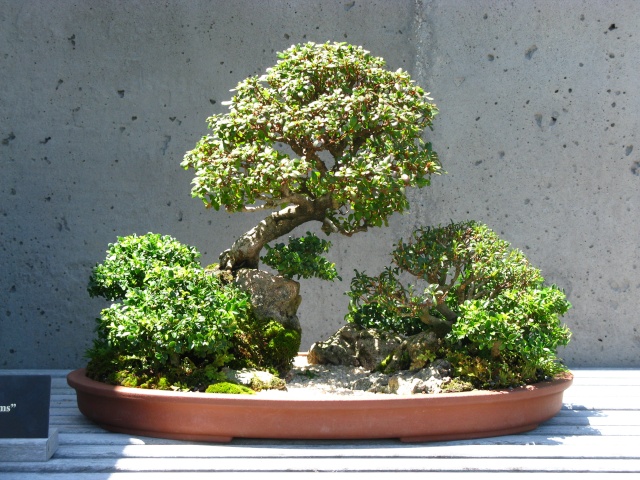 A couple of people have contacted me via the ISA Website about whether we take other 'tray landscape' artists i.e. Pen-jing, etc... I can confirm publicly that membership is open to anyone interested in tray landscapes. 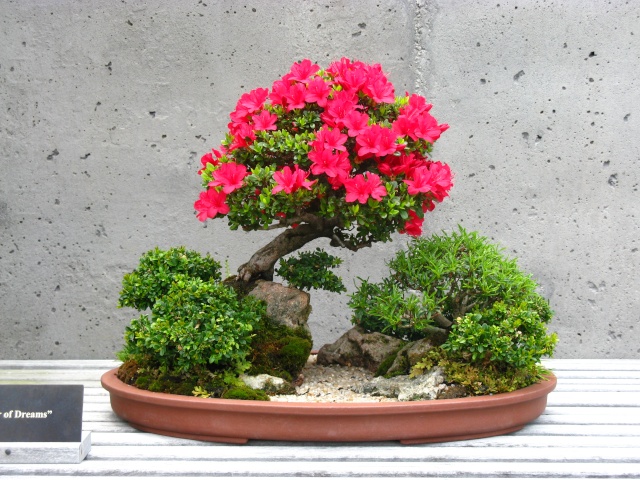 The azalea in bloom is a cultivar that goes by the name of 'Christmas Cheer'.

Hi David, and everyone else.

Please check out my post on the pot forum: https://ibonsaiclub.forumotion.com/pots-f3/help-id-ing-saikei-pots-t3420.htm#34005.

I'm hoping you or some of your Saikei friends may recognize these pots, anyone have any ideas?