This little cherry is not much of a tree, but I think it's pretty at this time of year. 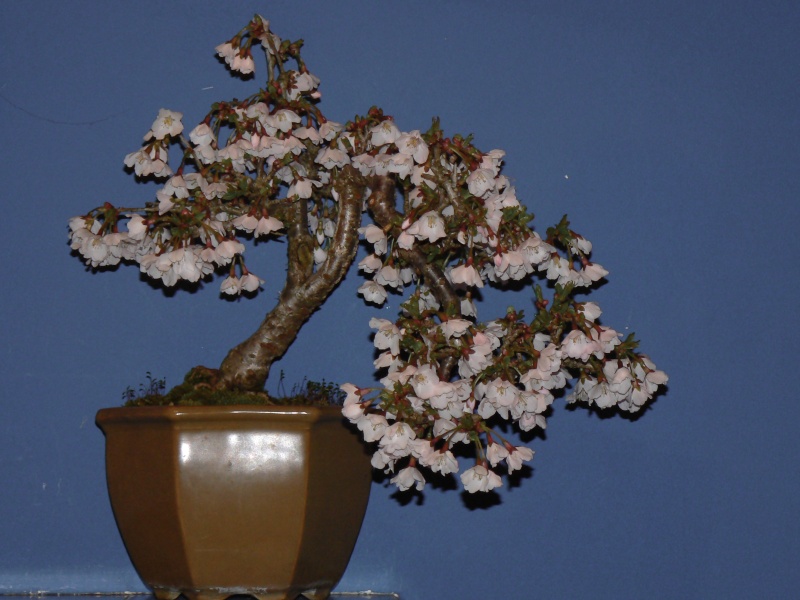 I really like Kojo no mai, despite its wayward growth pattern. 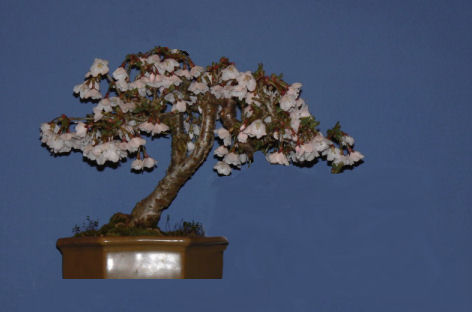 I've considered that, but I think there would be too much of a slingshot effect. I reckon one of the 'trunks' would need to come off. I have been thinking about reworking it, there are some possibilities at the back of the tree I think. However the flowers are the main event for me with this one, so I'd be keen to maintain as much of a platform for them as possible.

Why not make it a "true" cascade?

If it were mine (I love this phrase

), I'd air-layer the branch on the left and keep only the one on the right. There is an interesting movement in the top too: 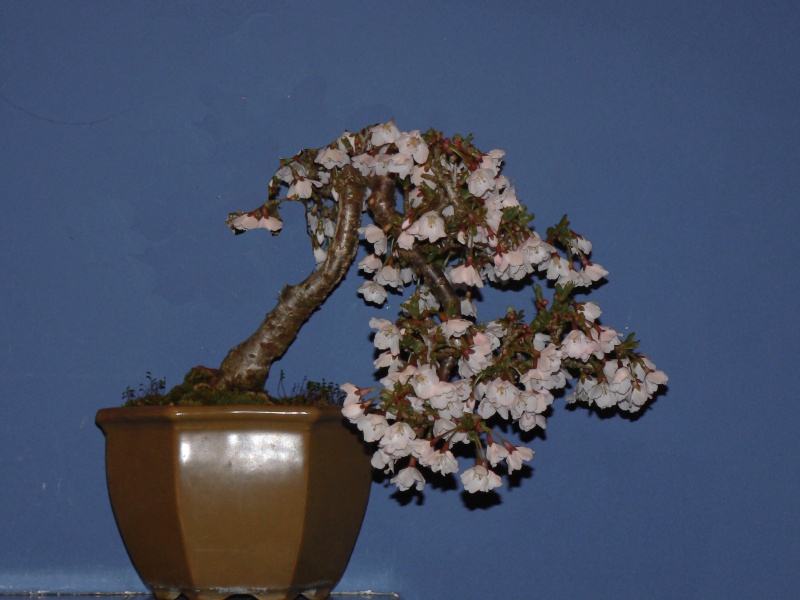 And instaed of a convex pot, I would choose a concave one to give the impression that the tree is surging upwards before the flowers are going down like the stars after the explosion of a firework.

Thanks for the comments and virtuals.

The reason I developed the left hand branch / trunk / thing was to provide some balance, otherwise I felt it looked as if it was falling out of the pot (I get that impression a bit from Alain's image).

If I keep this front then I may well extend the cascade branch, maybe bringing it back in front of the pot (I agree on the pot comment by the way, it's in this one because it was the only one I could find to fit at the time). It actually was an attempt at a full cascade at one point in history (2002): 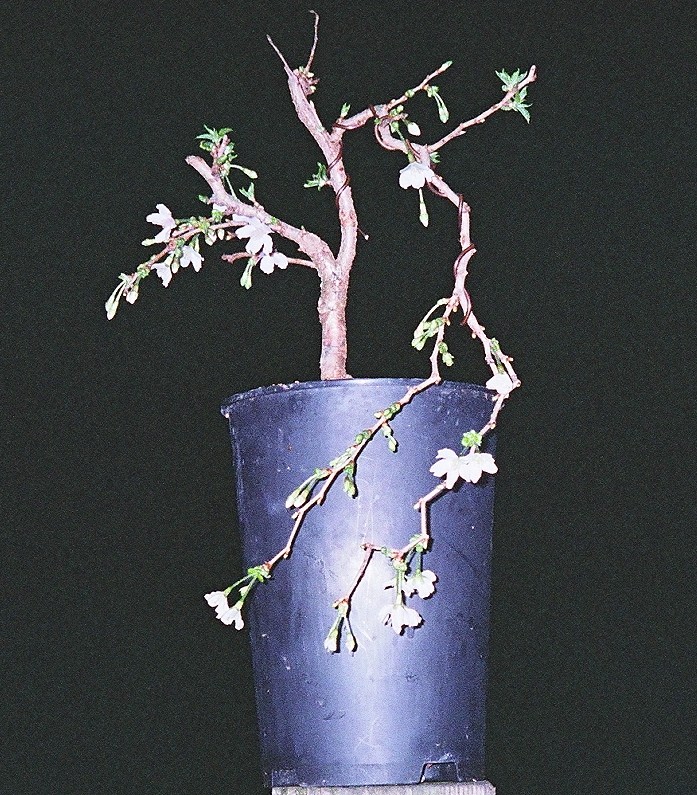 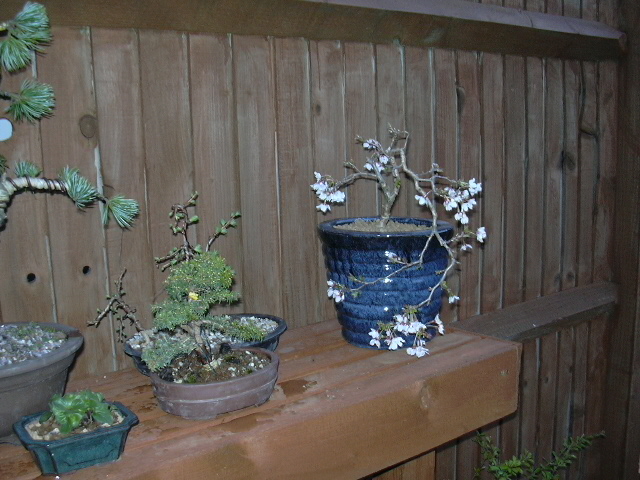 And this was the tree in 2005 (looking back I almost prefer that image, more delicate). 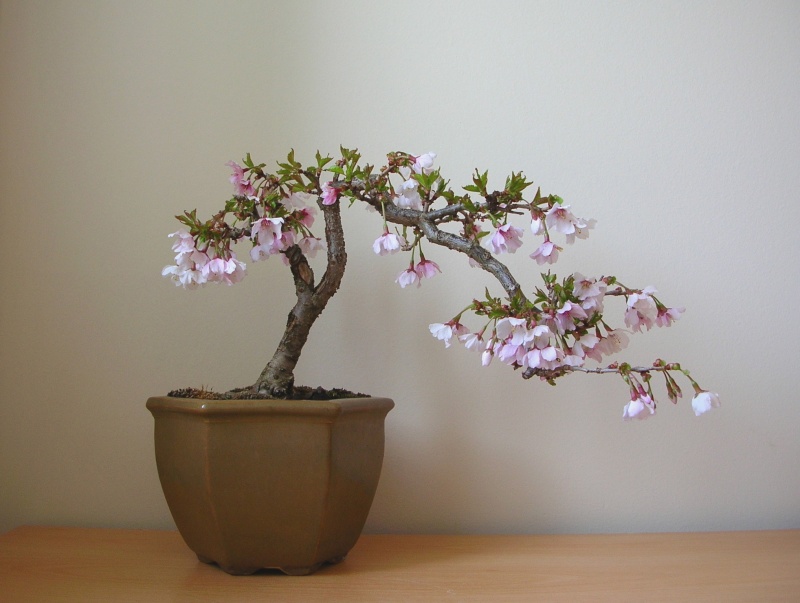 ). Once the blooms drop I may post again, with some views from different angles too. Looking back at the earlier pictures I think it needs some thinning out at least. 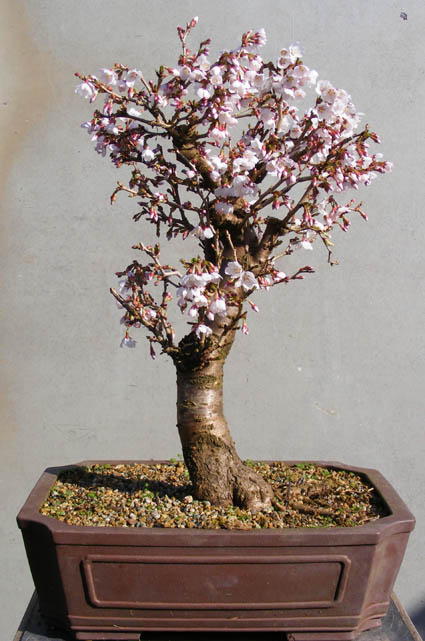 This is my one about two weeks ago. Field grown for around 5 years, in this training pot about a year and hasn't been styled yet. Going to give it another year of clip and grow first. It seems to take a while to get any girth to the trunk. A friend is about to air layer one. Has anybody tried layering with this species?

I have successfully layered off these trees and posted a comment recently but anyway. Take a full ring of bark in early nto mid May in the U.K.and cover with sphagnum moss. I prefer to use bubblewrap for the bag as I think it maintains a more stable temperature than just plastic. Make sure that all light is excluded from the rooting zone and check the moss for dampness regularly. These trees will root well in about six weeks but I leave them until the foliage has turned in autumn and then remove from the parent. Good luck.
Regards,
Andy.

Firstly, I know this thread is a little old, but I have to say those are some beautiful cherries; hopefully mine will be as nice one day.

Secondly, not to hi-jack the thread, but if those of you with experience with these little trees could give me some advice, I would greatly appreciate it.

I currently have two, very small, contorted cherries; for the past 1-2 years, in spring they leaf out beautifully (not many flowers, too young/small still I think) and grow very well up until about June, maybe early July. After that, things dramatically change. The leaves gradually start getting brown, usually starting at the tips or around the edges, wilt, and fall off.

Last summer, the first one I had (I bought the second in fall last year) did sprout some new growth later in August/September before that, too, started turning brown and falling off. Initially, I think the soil mix was too water-retentive, so I repotted it in a mostly akadama mix with a little tree and shrub soil; it was about a month after this that the new growth sprouted. Since the tree seemed happier in this soil mixture, I did the same with the second one I purchased last fall.

They are fertilized with my bonsai fertilizer twice monthly until the summer heat sets in, and I usually add some superthrive when I water 1-2x per week. I water when the soil is dry about an inch down from the surface. As the summer sun is very intense here, the trees receive sun until about midday, then are in bright shade. They are protected from the wind as much as possible as the leaves seem on the thin/sensitive side, almost like maples. I am hoping the cause of the browning/wilting of the leaves is due to the wind and/or high temps we receive in summer, but somehow I think there might be more going on.

If anyone can chime in with what they think might be going on, what I might be doing wrong, and what I can do to improve things, I would be so appreciative. I really like these little cherries, but I know they are stressed and I really don't want to lose them. Thank you!!!

Most prunus species that I know like to keep "cool feet" : from my experience, the pb is not so much the amount of sun they get on the leaves but how to keep the roots fairly wet and preferably cool.

I don't know much about Kansas, which is probably as big as France and there must be local climates too, but I've always imagined the place with very hot, dry summers. In that case, watering such trees twice a day (without soaking them, the top part should stay cool) would perhaps be a good option : that's what I do with mine when it's "very" hot here (over 25° C, something like >77° F if I can trust the online converter

spring flowering, with the approach graft , you get the power of the prunus mahaleb , the beauty of the bark , and the exuberant flowering of kojo no mai 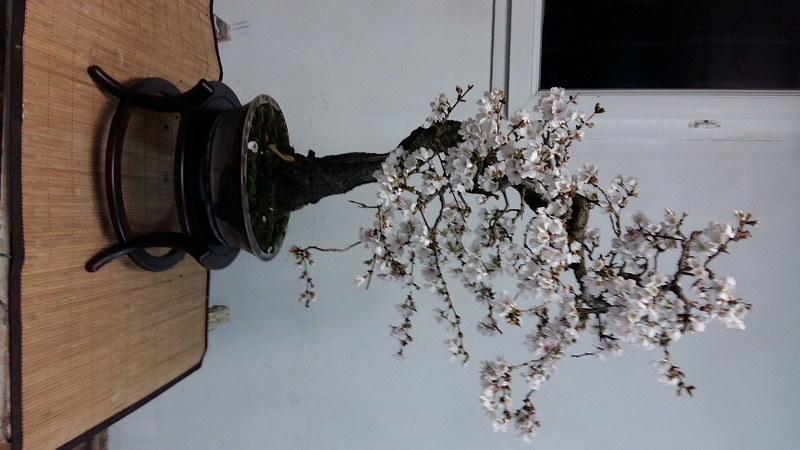 Presumably this is the tree you've posted here before? If so it's certainly developing well.

Yes, it's possible tout use kojo no mai or subirthella automnales 2 species ho are growing very slowly in pot but not with this technic