“Snow White” the Aspen Has Awakened

“Snow White” the Aspen Has Awakened

Its been such a long time since Snow White the Aspen was alive and vibrant. The days of old were long gone, no shining dark green leaves glistening with the morning dew on them. No golden leaves to take your breath away when gazing at Snow Whites beauty.  This was when she was really showing off. All that was left to admire was her slender graceful form dressed in white trimmed with black. The days and nights went by one by one. Cold and wind had set in and Snow White slept as under the spell of an evil queen called Winter. The Queen was brutal to Snow White and sent storm after storm after her. Trying to polish off Snow White forcing her into a permanent long slumber from which she would never wake up. One more bitter snow storm colder then all the others and far longer in its stay should do the trick or so the Queen thought. The Queen was unaware that Snow White had an old caretaker on her side. One that loved her, sheltered her and provided her food and water during the Queens almost daily assaults on her. The old caretaker would lay his life down to save Snow White and would wrap his old arms around her to keep her warm and safe. Talking, whispering to Snow White as if his feeble words could bring her out of her long deep terrible sleep. The old caretaker was old, really old himself. Some called him Father Time, he was that old. He looked old with hair as white as Snow White was herself. He limped, used a cane, was weak but yet still strong in some areas. It was his love for Snow White that saved her from the evil Queen. A love so strong the Queen could not fathom even existed and could not break even if she did know. Finally a visiting young prince arrived to visit the old caretaker and saw him holding Snow White in his old arms crying over her. The young princeling asked the old caretaker what was wrong and the caretaker crying said I cannot wake her. The old Queen has a spell on her and she just sleeps. There, there all is not lost old man. He leaned over kissed Snow White on her beautiful white bark and Snow White immediately woke up much to the old caretakers surprise and joy. Soon Snow White had a brand new set of shiny leaves glistening against her white trunk. More beautiful then ever before. The old caretaker still crying asked the young princeling his name. The prince replied “Spring”. Prince Spring is what they call me. I bring life to the down trodden every year, year after year, until time ends. Take good care of her old man I must be off to visit others needing help. 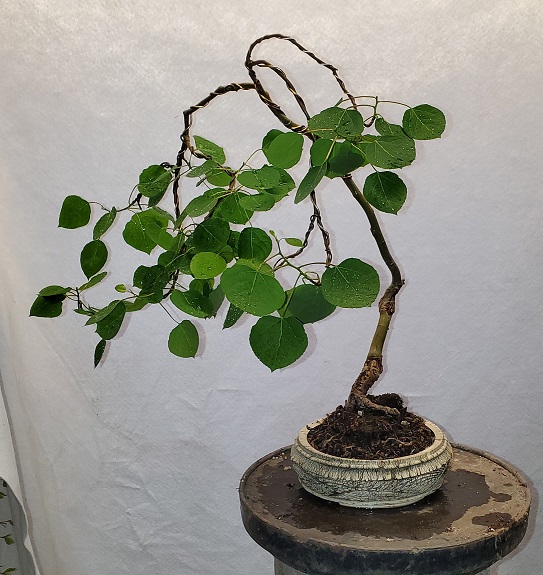 What a beautiful tree, never heard of her before and really enjoyed the story Lovely!

Your both welcome and thank you both for you complements. "Snow White" is the actual name of the name of the tree by Jerry Morris who took a cutting off of an really white Aspen growing in the mountains of Colorado. He grafted it and others to root stock. He named this one "Snow White", so "Snow White" it will be forever.