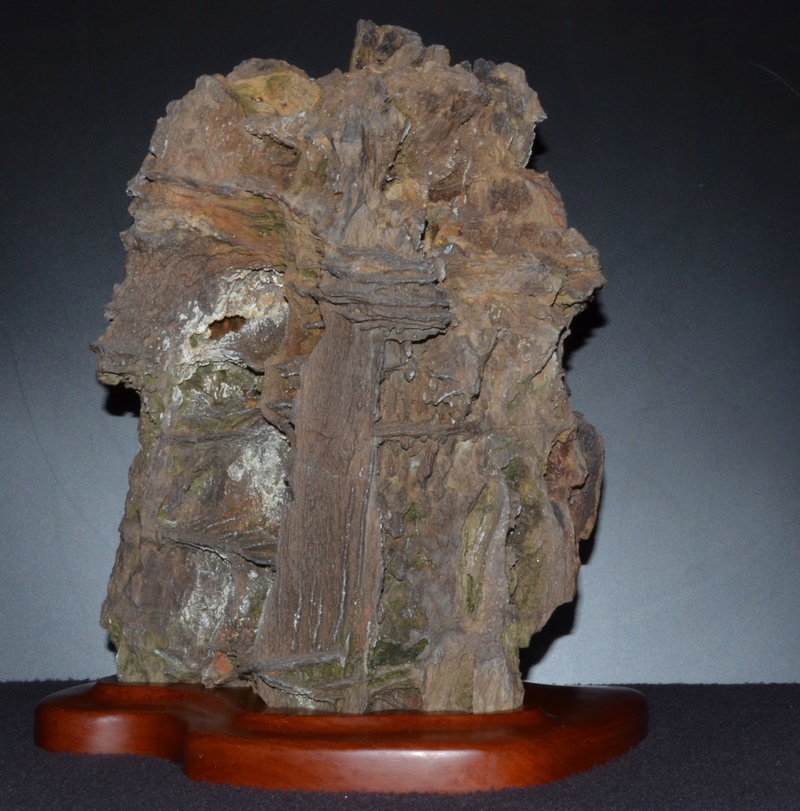 I am not sure how this stone would be classified.  Any advice would be appreciated.  Thank you.
Tom 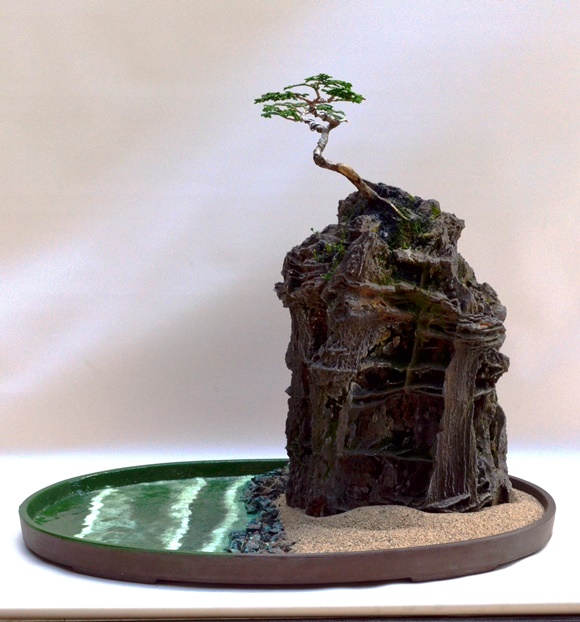 The Hinoki Cypress resided on the stone for many years before its demise last year.  It was a tough loss but such things happen to all of us.  I have posted the composition over the years on the forum.  I will continue to enjoy the stone on its own.

Sorry to hear that. The composition was amazing!

Hate you lost the tree. This was one of the first compositions I remember seeing when I first joined this forum - I loved it.

Why do you think the Hinoki died?

Hi Tom... As you have it sited on the "earth side" of water margin, it could represent a " 'coastal cliff' mountain view." If the suiban bottom was completely covered in sand, I'd imagine a "coastal rock," pushing out of the sea. Is it bog iron? Your planting suits the image very well-- the smaller the "tree," the larger the landscape view.

Klosi and Steve: Thanks for your kind words.....Steve....I do not know why the Hinoki died....it had been on the stone for over a decade...I did enjoy it so much and miss it.

Chris: Thanks for your comments. Actually, the first photo. of the stone on the daiza is its current state. I do not know if it is bog iron or not. I appreciate the kind words as this earth/sea composition was a favorite of mine.

I am still very fond of the stone.

Best regards to you all,
Tom

the stone is nice but I cannot classify either. However I can tell you that without the hinoki it will need much less water.

Hi Tom... After noting you intend to keep it in its wood seat (daiza), I returned to that more-detailed image & easily imagined an "avalanche" or "waterfall" view. Choose whatever piques your imagination. You can support a chosen view with a small accessory that amplifies appreciation of the scene (e.g. "scholar & poet Li Bai looking upward" is often paired with waterfall scene).
_________________
... visit the U.S. National Bonsai & Penjing Museum, Washington DC USA-- http://www.bonsai-nbf.com

Hi Chris...I like the waterfall view as well. Could you please explain your accessory suggestion as I am. not that well schooled in suiseki techniques. Thank you.

Hi Tom... Give me a while to respond. I have immediate chores and will be visiting my mother-in-law this afternoon. There isn't one exclusive understanding on display of complementary objects with suiseki. Since 2004, I've firmly believed that "technique is subordinate to feeling." Still, it is technique which we can readily discuss though I'll note feeling & seasonality as important expressions, too.
_________________
... visit the U.S. National Bonsai & Penjing Museum, Washington DC USA-- http://www.bonsai-nbf.com

Sure, no problem Chris...I just appreciate your insight and advice.

Hi Tom... You have wide options to display the suiseki as a waterfall stone, but the waterfall image is not so obvious that a broad range of viewers will recognize it.  Arguably, that can be to the stone's credit as less obvious landscape features can draw stronger engagement & feeling than an obvious feature.

Occasionally, scrolls are chosen with an image so vague that it is nearly indiscernible.  The indistinct image leaves more room for the viewer to fill space imaginatively with personal impression.

The viewer/guest wishes to share the impression of the creator/host of a display.  The host can help the viewer share his intended impression of a principal display object by offering a scroll or a complementary object that subtly points to a particular landscape, a poetic &/or seasonal allusion and, perhaps, metaphorical resonance to a real or mythical event.

In a video on display, Ichiu Katayama complements a waterfall suiseki with a small grass planting at some distance from the stone.  The video notes the guest imagining water at the base of the fall winding its way to distant marshland.  Using the beauty of empty space adds to imaginative resonance.

Among the most famous suiseki in Japan is a stone reputedly brought from China by the monk Ingen in the mid-17th century.  It was later owned by the Japanese literatus Rai Sanyo (late 18th-early 19th century) & noted in the Covello/Yoshimura suiseki text as in the nursery of Yuji's father Toshi. The stone is named Koshikanbaku/ "Li Po Meditating on a Waterfall."  It references Li Po's poem:

Sunlight streams on the river stones.
From high above, the river steadily plunges--
three thousand feet of sparkling water--
the Milky Way pouring down from heaven.
Standing and reclining figurines of a robed scholar looking upward are recogonized as the 8th century poet Li Po (a.k.a., Li Bai) in numerous artworks. You can "Google image" search for confirmation.

With a bonsai (even a tiny bonsai on a larger stone), you have a bonsai planting rather than suiseki.  A published American suiseki from Yuji Yoshimura had wires cemented to it, later, for a bonsai planting.  Subsequently, the wires were carefully removed to return it for stone appreciation. Your stone is especially nice with subtle details suggesting falling water & high/remote cliff mist.

There are details of choice & arrangement for principle display objects, scrolls & complementary objects on many IBC threads.  If you have a specific question, Tom, I'd be glad to share one student's opinion.

Thank you very much for the information, Chris.....It helps me to gain so much more insight about the stone and the art of suiseki. I would like to hear your student's input if he is so inclined. Thanks again.

What a real shame regarding your bonsai, but it happens to us all. I my opinion it has to be a subtle waterfall stone. I would put it back on the sand with the waterfall facing the sea.

Thanks so much for your input....I like your suggestion a lot and will probably follow through with it. I put many hours into creating the "ocean" in that suiban....thank you for helping me to see this.