TUNNEL STONE
Tunnel stones. The hole or holes in these stones suggest a pass-through tunnel or natural arch. Traditionally, the tunnel passes completely through the stone , with thingking of someone , tunnel stone in your house will meet lucky and many thing flowing . 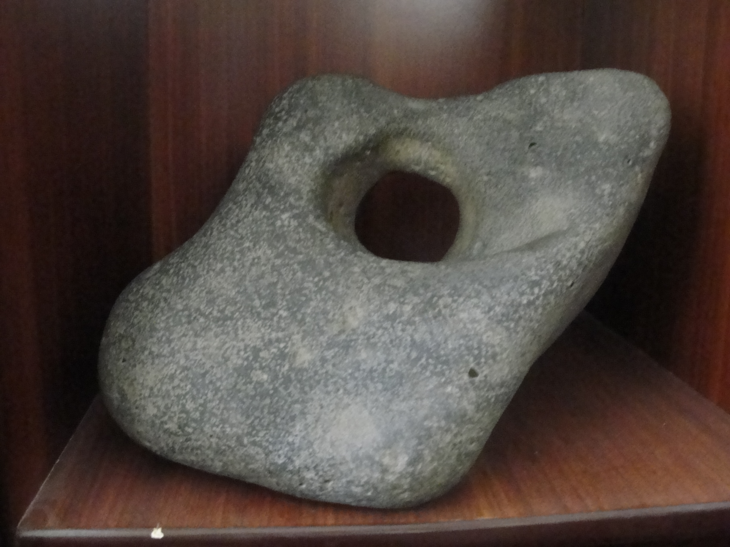 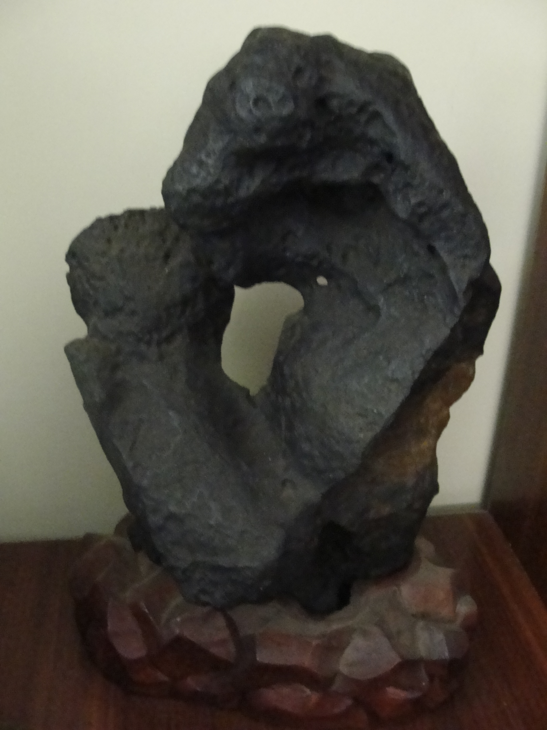 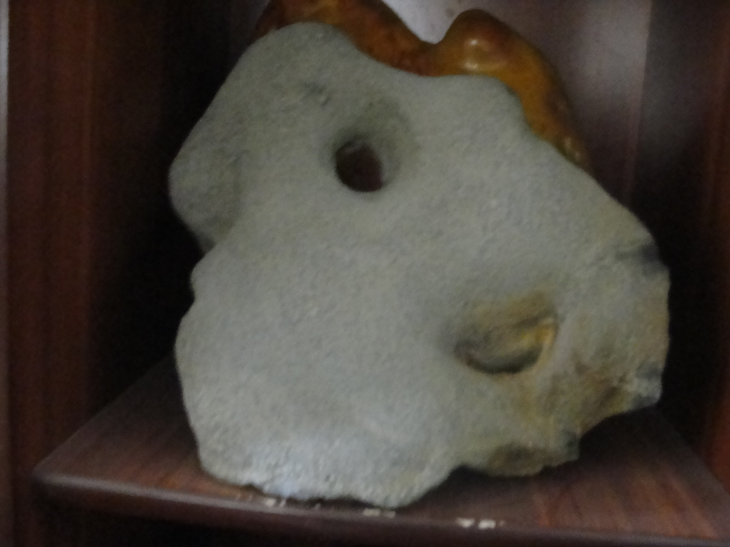 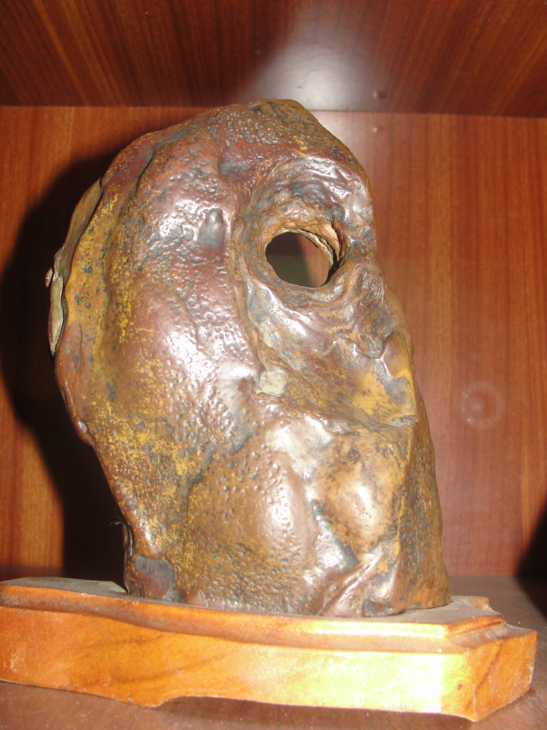 The stone "the kiss" in beautiful, and I like his daiza (strange and atypic daiza !).
The tunnel stones are not, for me, a stone with a hole through the stone, but a passage under the stone.
For example : 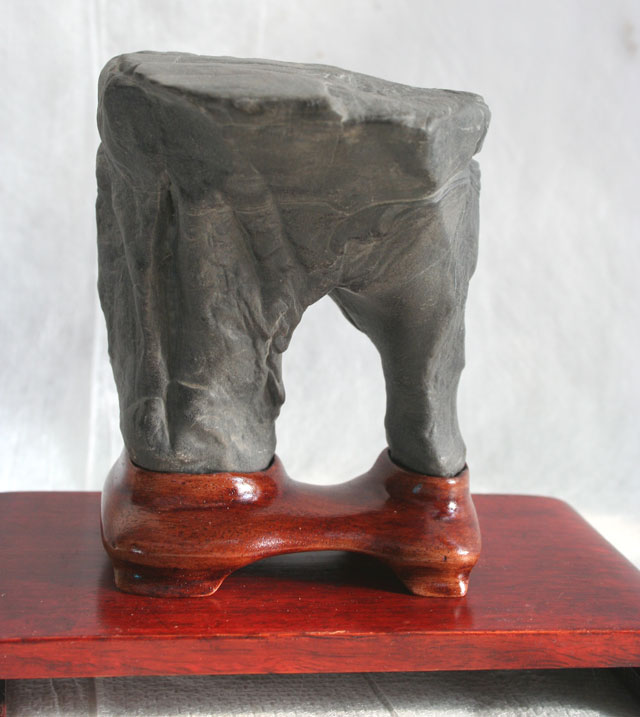 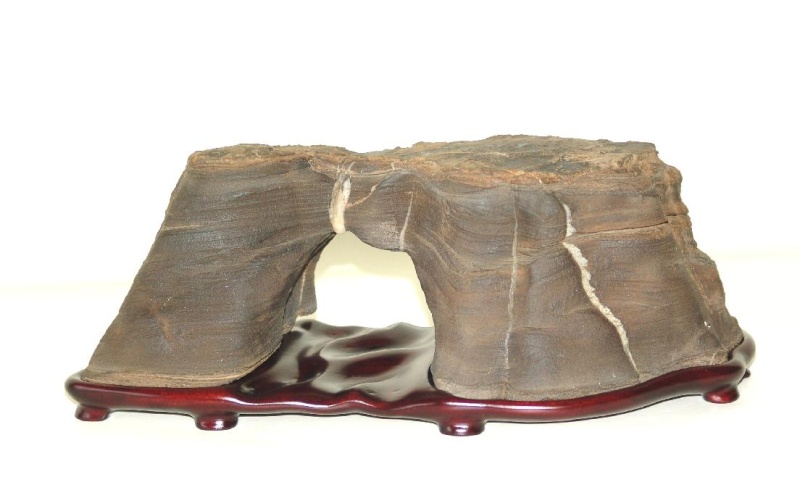 For your stones, I see only stones with hole(s), but it's not tunnel stones.
I'll make a verification on books for the exact definition....

According to my books Covello/Yoshimura and Rivera, these are tunnel suiseki. I agree that The Kiss is a particularly fine example.

Mathias, I think that both your stones are (very beautiful) arches.
_________________
“It is not the strongest of the species that survives, nor the most intelligent. It is the one that is the most adaptable to change.” - Charles Darwin.

Hi Mathias...  If you have not been reading the last several issues of the "Guy Jim" (Jim Greaves) column in the online California Aiseki Kai newsletter, you might check it out.  For at least three issues, Jim has been addressing bridge, tunnel, ‘window’ & related stone forms, in detail.  Jim distributes Japanese names to categories he defines & explains why.

Jim's intention seems not unlike California Aiseki Kai member (and previous newsletter editor) Jack Dennis, who has developed a detailed classification system using Japanese words to define categories more distinct than existing classifications.  Jack generously shares his system with others, & it is impressive for its magnitude of distinctions.  Jack has asked a presiding authority in Japan to validate his classification system and has received verbal acknowledgement while he awaits a written validation (the last I heard).  Just reading Jack's categories recalls varieties of scenic landscapes and seascapes.

Jim does a nice job of documenting his sources, and Jack can share voluminous material regarding his distribution & parceling of names.

Japanese domon-ishi "tunnel stones" are perhaps intended to represent ‘natural arches in water’ as might be seen on a coast line.  Jim chooses to call those suimon "water + gate/gateway.”  Japan has natural bridges over earth, not unlike Natural Bridge in Virginia USA which spans a creek but mostly stands above an earth ravine; photos as well as brushwork document real & fabled arches above the earth in Japanese landscape depiction.

Especially if they have a flat floor, are natural arches-over-land implied by tunnel stones?  Japanese enthusiasts do not see desert arches in their landscape; I would add that desert stones carry a different patina than Japanese suiseki, which are praised for holding moisture close to their surface.

Jim notes "bridge stones" hashi-ishi as replicating man-made bridges (and often a simple, low-arched footbridge) in suiseki practice.  Therefore, a tunnel stone is of a landscape view whereas a bridge stone is an object stone connected only loosely with nature.

There are very different concepts in Chinese stone appreciation.  Stones with bridges connecting distant peaks are among the replicated forms of early Chinese scholar rocks documented in the Worlds Within Worlds text on Chinese scholars' rocks.  The Daoist concept of cave heavens is perceived in stones with piercing holes as an entry into the realm of Immortals.  The round “moon gates” associated with Chinese gardens are metaphorically perceived similarly-- as potential entries into the land of Immortals.   It is through a cave that Tao Yuan Ming’s entrance to timeless land of Peach Blossom Spring is reached.  Traditional Chinese scholar’s rocks present holes in stones as entrances to other worlds for which the stone is the threshold.

In Japanese-style suiseki practice, a cave is best represented by a hole with a floor that enters the stone & turns before stopping, whereas in Chinese practice the cave entrance is best revealed piercing the stone.  Jim notes that piercing holes which reveal a landscape scene behind them & hide part of their exit are more ideal than a clear hole.  I’m not sure his source—it could be Jim’s own perception of the “hidden-and-revealed” as well as of “borrowed scenery” which exist in both Chinese & Japanese garden design.

Several of Ngoquangvu’s stones without flat floors to tunnels and with only a narrow surround at the would fall under the category of a “window” as Jim Greaves describes that category for suiseki. “Windows” are not uncommon as landscape views in some desert landscapes.

RE' your stones' seats, Mathias, the designs are appealing & well-crafted.  One completes a rough, rounded circle as is common for Chinese shizuo "stone seats" but uncommon for suiseki-style daiza; still, that seat has the plainness more associated with daiza than with shizuo.  The other has a decorative floor (perhaps, it is suggestive of waves) between the tunnel's inner-side pillars/lintels.  Since both your stone seats have a strongly Chinese flavor, I’d suggest the stones fall in the shangshi-style of mounting which can include shizuo “stone seat” as well as daiza attributes plus considerable originality.  Ngoquanvu’s stones cannot be discounted for not following Japanese guidance in regard to tunnel stones.  They exist & leave impressions which are distinctive.  Your tunnel stones should not be discounted because the seats are not in classic daiza style.  I like "window stones" that I've encountered, but Jim is the first to make that form apparent to me.

I should read Jim's articles, again.  There is always something to learn from his experience.  He appreciates subtle expression that enhances feeling.  California Aiseki Kai is very generous to post such articles on the Internet and repeated readers should consider joining the club to support its effort in sharing.

Thank you for your long and complete response.
I'll read the link California aiseki kai newsletter, thank's a lot...
The two stones that I have sent are not mine : the second stone, for example, is a Felix Rivera's stone.
My reflexion for the stones of ngoquangvu06 was just because those stones don't suggest for me a natural landscape, and those holes don't evoke (for me) a natural tunnel (more deep than large....).
However, the term "window" is more appropriate.... and his spiritual meaning....
I'm agree with you to say that Japonese or Chinese guidance can change the classification. It's also possible that our cultural difference (Asia, USA, Europe etc...), our geographical difference (and geological difference !) influence our taste, our preference.....
I'm sorry for my english, not very good. Ihope that you have understood me....

Hi Mathias... Your English is great. It was I, who misunderstood your admirable intention of looking for nature. Please give Marco Favero my best wishes; I think you study stones together, & Marco is a friend who I deeply respect.

I happen to like stones with holes because I see a threshold where what exist beyond the hole is ambiguous. A realistic or metaphorical entrance to a grotto revealing a cave heaven is good enough for me, yet the cave heaven is a very ambiguous notion. If you are familiar with the former American TV series The Twilight Zone, its introduction referenced, "the middle ground between light and shadow, between science and superstition." Resonantly, the term "liminal point" in psychophysics is sensory threshold so barely perceptible that it is the lowest amount of sensation detectable by a sense organ; moving through the liminal gate, a new world of sensation unfolds.

In Keido practice & traditional Japanese aesthetics, looking into a tokonoma alcove is not "viewing" inside a room. An alcove is not counted as room/mat space but is perceived as a window to another space or view with varying degrees of spiritual & only modestly decorative intention. While the alcove is the center of attention for the room-- especially where a scroll is hung-- it should be seen as though looking through a picture window at unbound space with limitless metaphor. The eye returns to the hanging scroll (or center of the back wall if there is no scroll) after contemplating the objects within the principal alcove (hondoko) & subsidiary alcove (wakidoko) or decorated space to imagine a boundless open space for sensing atmosphere.

It is not described as such in Keido practice, but if someone expresses the feeling of passing from the room to a tone or atmosphere outside of the room by looking at objects within the space, their expression can be acknowledged positively. Outside of such expression, Keido practice seldom elicits affirmation except for the taste of the host. This is very close to expression in tea ceremony but with more emphasis on the alcove display as ritual rather than the serving of tea or food as the principal ritual. In Keido sessions I attended, a meal was always served in great etiquette & on one occasion, Sudo-san's wife served chanoyu ceremonial, whipped thick tea... but the focus was the "Way of Display" Keido for bonsai, suiseki & kusamono (grasses & wildflowers). The liminal point for Keido is imagining through the back wall of an alcove to the larger scene/metaphor which unfolds in your mind.

I do not always sweat the details of flooring for the cave or seeing a distant peak behind the hole. I don't worry if the hole appears more like the center of a donut than a pierced landscape scene. My favorite "stone with hole" is a stone found by my friend John Carlson in PVSG. He found it used as the doorstop at a country store. It rings like a bell. Its surface is wonderfully smooth yet modestly meandering & pitted while its skin is deeply lit by translucence. It is relatively large so that one person lifts it with difficulty. A great draw for me is that it is a rare stone example from my home's soil. John is very reticent to allow that it is special, which is also is more appealing than my burning desire toward this stone. The owner's name for it has something to do with a dragon; I see the hole more strongly than the form. My feeling is not informed by discernment... but sometimes an object lifts a viewer without clear reasoning. 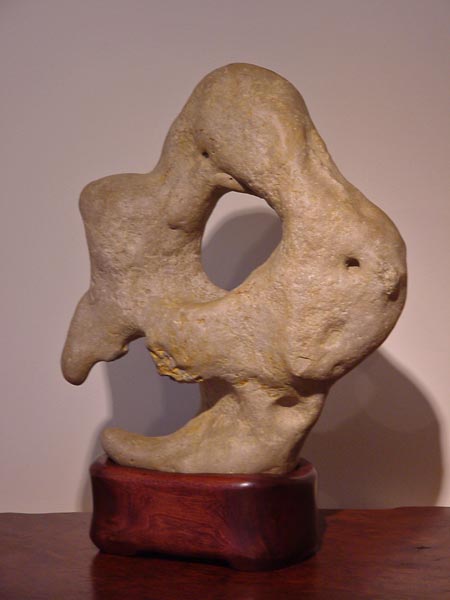 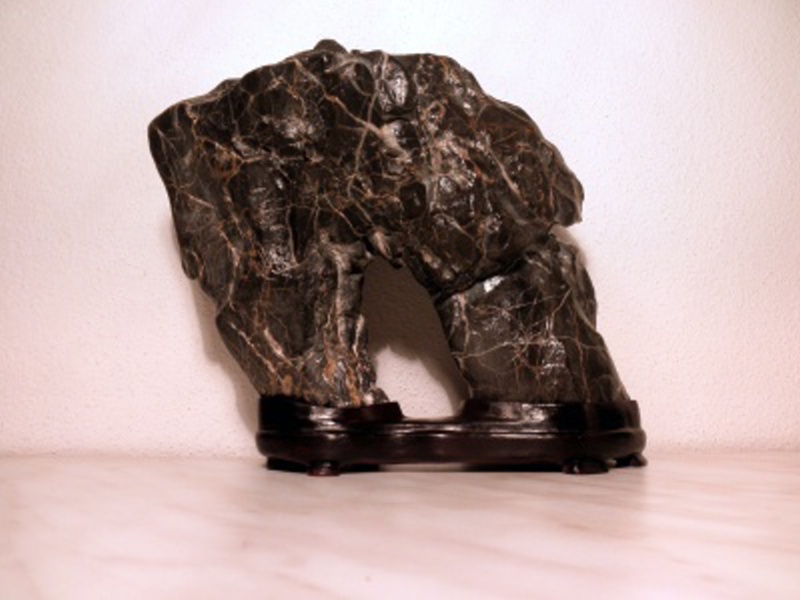 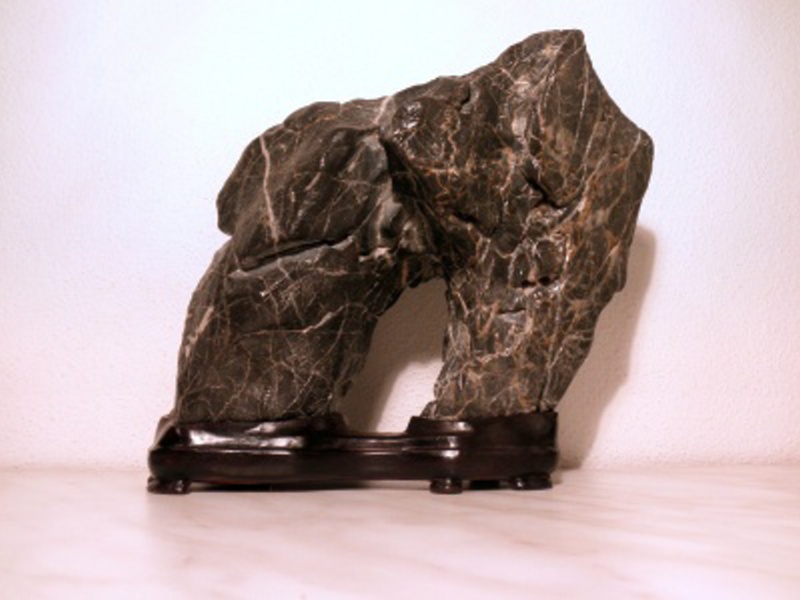 Beautiful stone. Where does she come from ?

Hi Mathias.
If you mean a last stone, it comes from Slovak rep. area near by Martin town.
The owner is Peter Brodnansky but he does not speak in english.

have a nice day
vlado

This is landscape stone . Tunnel stone or window stone ? 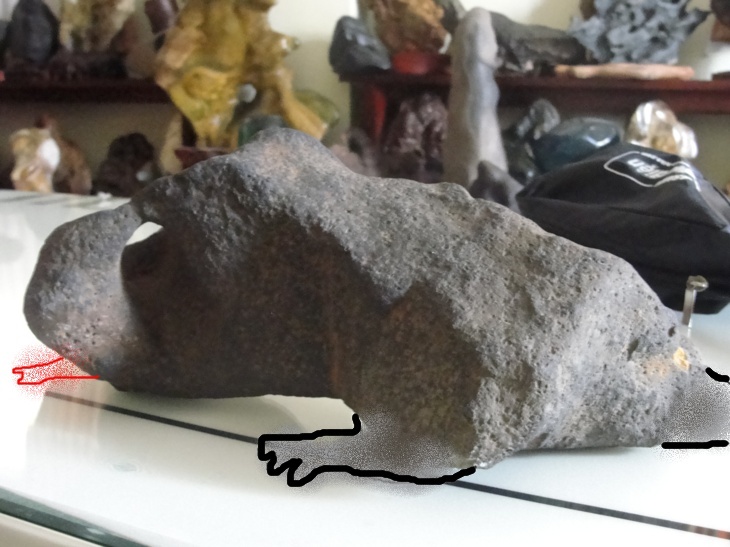 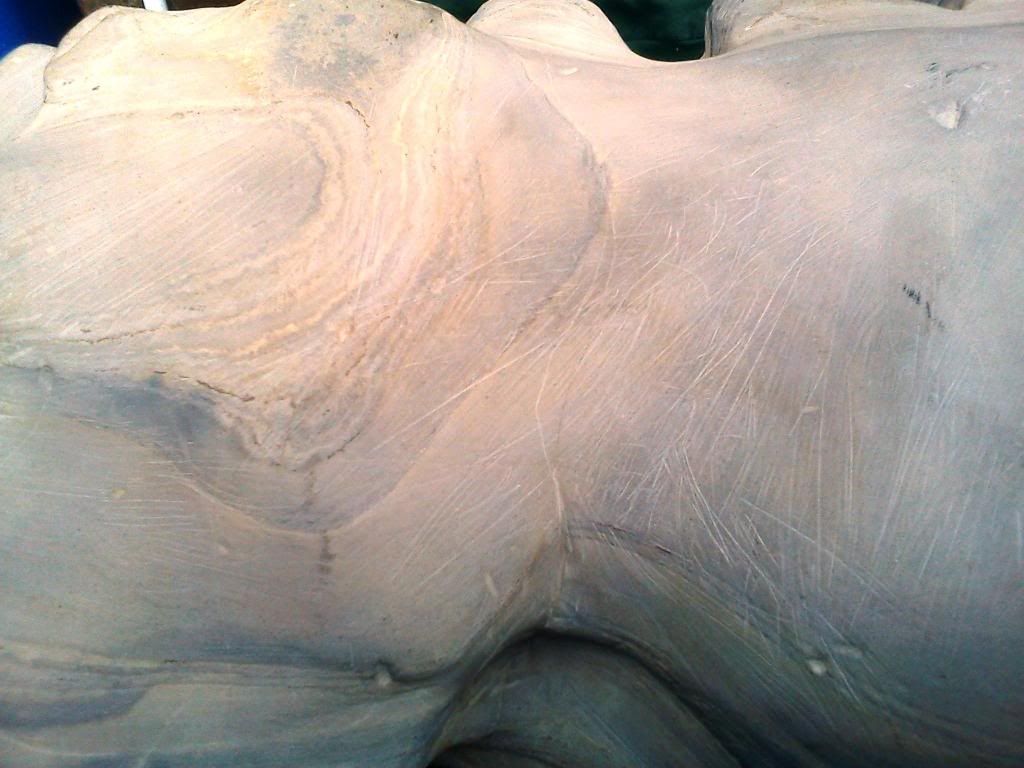 " />
Hi here is my tunnel stone, suposed to have come from a desert in china.  Not sure what it is.

Hello My Friends - Members IBC Forum ,
With me , The stone below is tunnel stone . _ And you ?
Thank you very much your share experience .
Hưng - Trần . 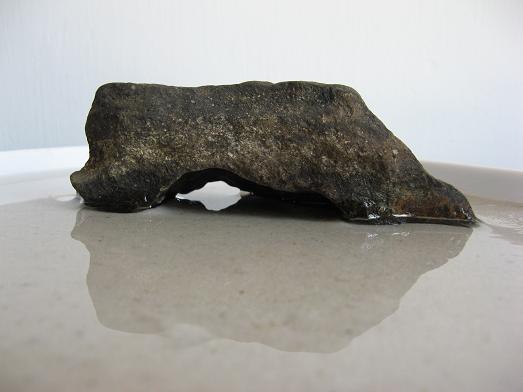 Re: This is landscape stone . Tunnel stone or window stone ?

My Friend Hung I see this guy? 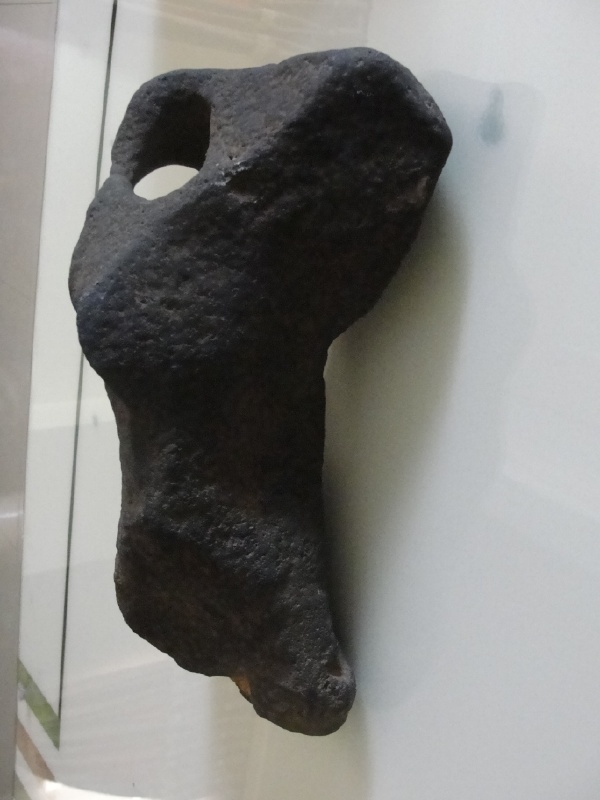 window or tunnel or cave or eye?
maybe all, maybe none, maybe one?
I like eye!...

Hello My Friends Stonener ,
I also think so ... according to the place of stones .
Thank you your share experienves
Hưng - Trần .