Putting the images here for, I believe Geo, as there are many more Tropical growers here than on Bnut.

Airpot - maybe 5 years old or so 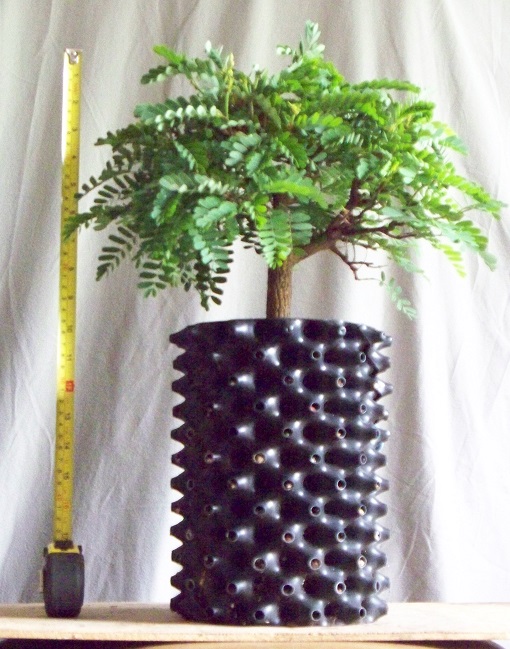 Will add on image when the tree is back in leaf. The airpot does speed up development 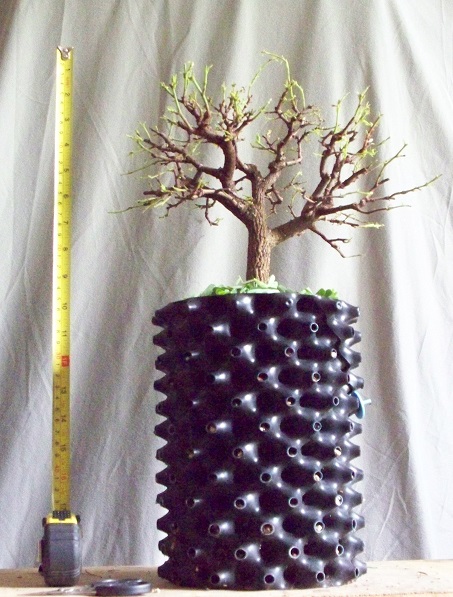 I have many small examples and am testing just how little soil a tamarind needs to grow well. 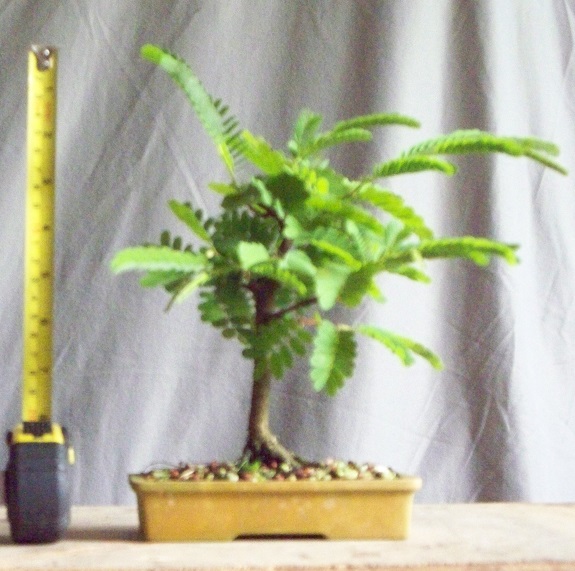 This used to be my avatar around 2010
Khaimraj

They will continue to thicken in a pot. On our side, tamarinds have no surface roots save through soil erosion.
After 10 years, they flower and fruit, bark changes from furrows to flaking and the bole lifts to thicken.
Khaimraj


Handmade porous pot, with glaze and the base is glaze free, about 8 years old. 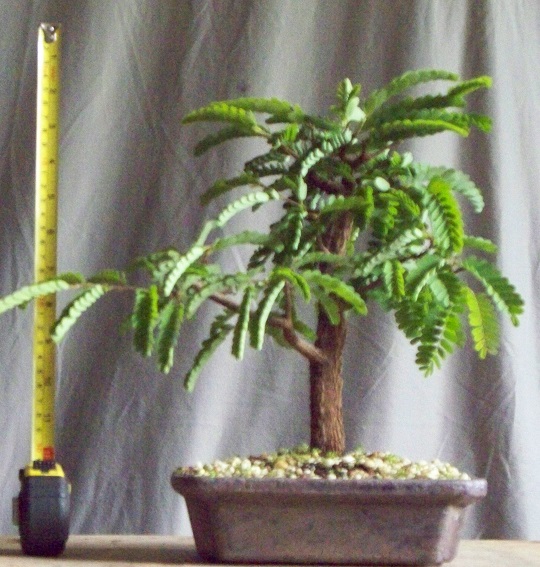 This is a new one to Trinidad, the so-called Sweet Tamarind, our source of the Tamarind is from India.
I will keep adding onto this topic, as time allows.
Khaimraj 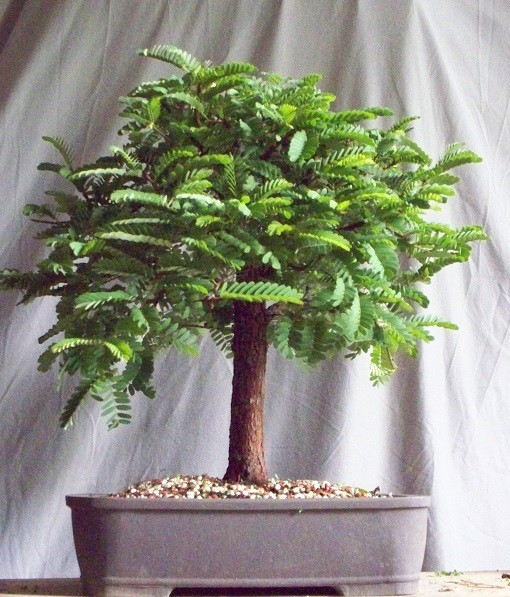 Khaimraj Seepersad wrote:Putting the images here for, I believe Geo, as there are many more Tropical growers here than on Bnut... ...

I have searched here on IBC, a lot of threads dealing with photos of M. p. bonsai or penjing but no thread with detailed info regarding root reduction, first hard pruning/stumping etc I have also turned for help on B-nut but no luck

Anthony and Sam haven't shown up with advice. So, do you have any knowledge regarding Murraya paniculata? I have seen a respective thread of yours.

let's give you a Sweet Lime [ as Murraya p. is called down here. Please give me a few days.] Topic.
Stay well.
Khaimraj

Thank you very much, Khaimraj, for the photos. Do you happen to have photos of young seedlings: 2 or 3 months old. I have around 30 of them. Time for a transplant though. I have 2 or 3 seedlings per 4 inch plastic pot and another 8 seeded in a 12 inch wide and four inch deep plastic pot. Obviously I want them to thicken, so what size pots would be alright. Is a grove idea workable with Tamarinds? AS to re potting, how are the roots? Delicate? How much can I get away with root pruning? Any other tips, or photos would be much appreciated. It's hard to run into someone who really knows them on some forums. So, my apologies- and once again, great shots!!

Khaimraj Seepersad wrote:Then Alexandria,
let's give you a Sweet Lime [ as Murraya p. is called down here. Please give me a few days.] Topic... ...

Looking forward to it. Take your time my friend!
Thank you so very much!

[2] Done around April this year, took about 5 months to re-sprout.

Comments yay or nay as you wish.
Laters
Khaimraj 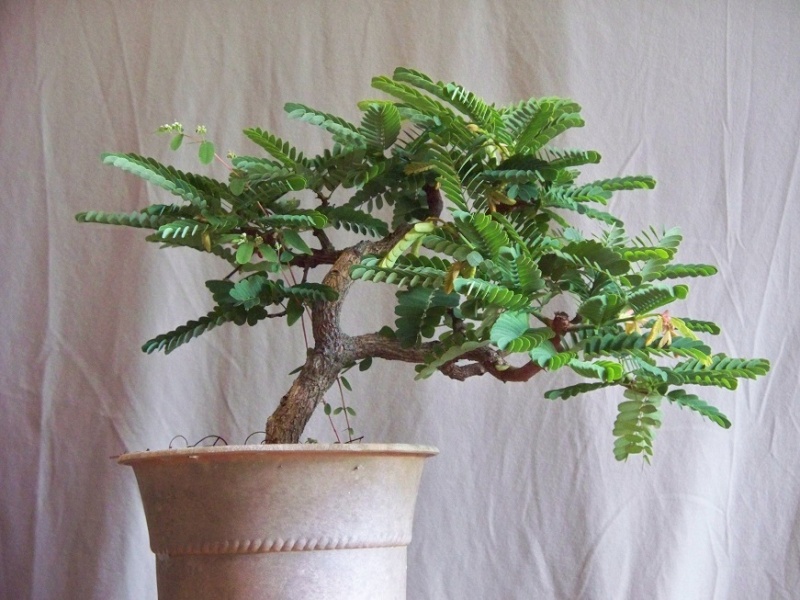 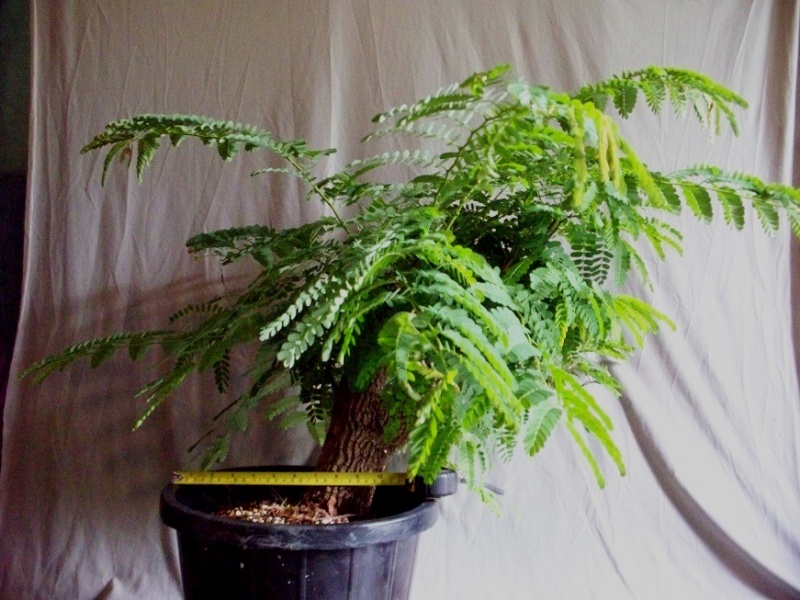 If you decide to wire -

[1] look at the base, left a nasty sink, but the cambium is healing nicely. Next step burying in the trough for free growing for a year or two.

[2] Damaged by 4" brown grasshopper attack, had to re-start.

[3]Back in leaf. Defoliation allows for more branching. 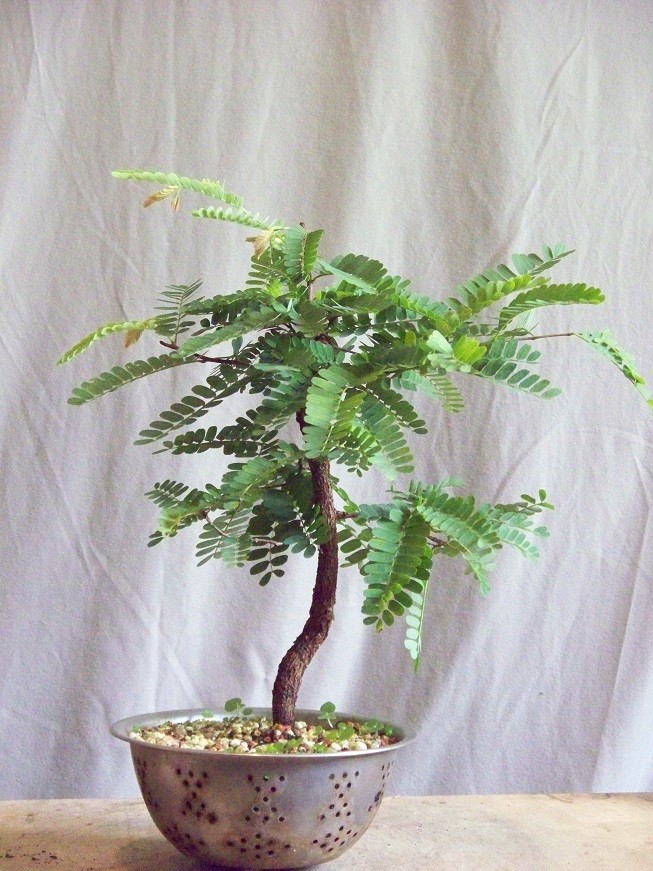 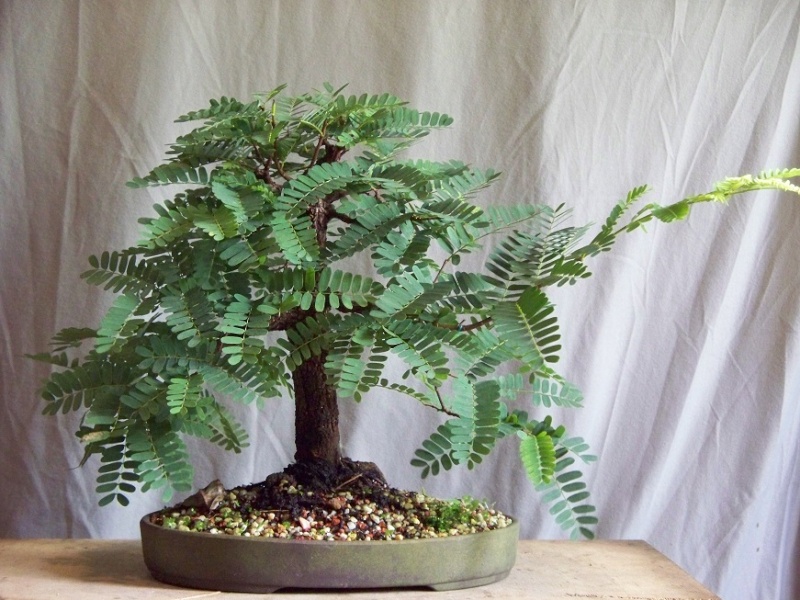 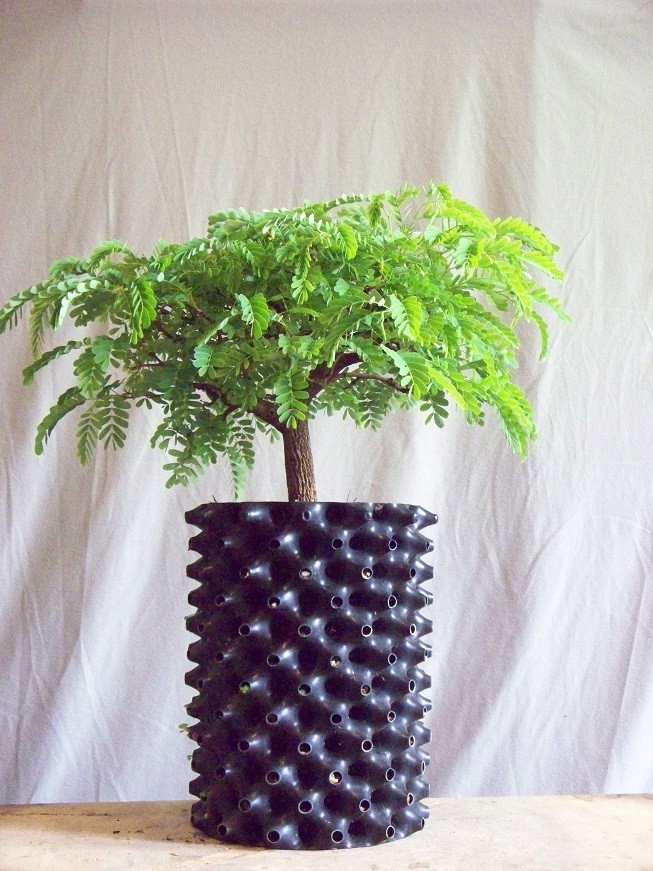 From seed, trough grown, source a now gone 150 year old Tamarind from the seaside.
Temperature at the seashore low 90's to low 80's F.
Defoliate /transplant anytime before April inland, and the tree might die. Cannot handle low 66 to 70 deg.F night temperatures.
I lost a sister to this tree, a multiple trunk 2 years ago and could not figure out why.

At a loss for a design, so must be patient.

As usual yay or nay feel free to comment or design.
Thanks for looking.
Khaimraj 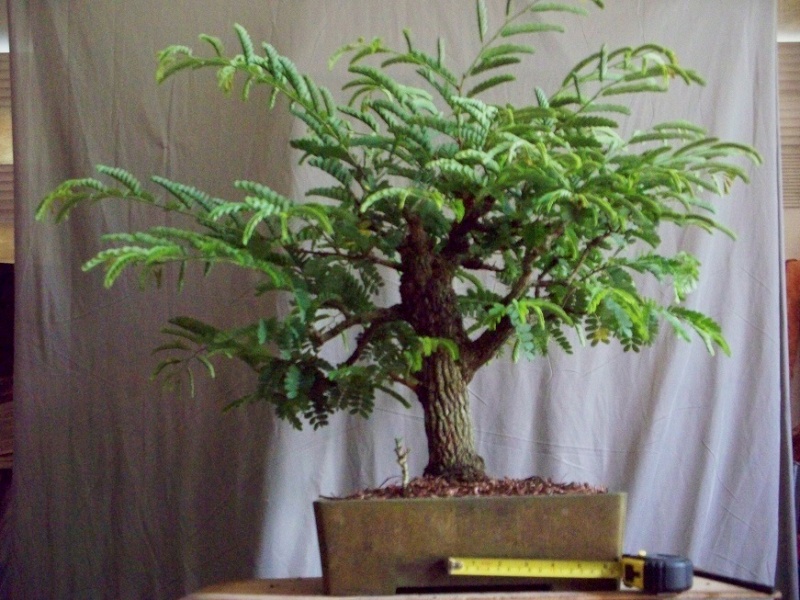 Some very nice trees there Khaimraj.

Of course it's hard to see the structure when in leaf but there's obviously some quality development going on in there!

Here in Baja we get temps in the low 60s at night in January. Should I bring the Tamarind seedlings in at night Khaimraj?

I LOVE the bark on these guys. I wonder how they'd do as cascade style trees...

I don't know.
What I would suggest is lots of tests, some inside some outside, see what happens. If you can write down your results, so you don't forget and also clutter up the mind.

that is the second stage of growing, after a few more years [ 8 to 10 years of age ] the bark will lose the furrows and start to flake in chunks.
Very strong trees, that are normally some form of vertical.
Never seen a tamarind save in informal upright and leaning. They love to be vertical, still.....................

Thanks for looking
More to come
Khaimraj

How do they react to bonsai techniques? Do they backbud at all?

they love - Bonsai - one of the easiest trees to work with. Just remember to fertilize for one month before defoliation, and in warm [ above 75 deg.F ] temperatures.
The Brooklyn Botanical gardens had one in thire green house back in 1980, you can ask for advice there, on growing indoors.

The only problem I have had with them and not all get it, if someone is disturbing soil - excavation [ they are building a new mall across the highway from me ] the leaves can get a white powdery blight. Same happens in India.

The trick is to aim for a trunk and the first six branches. I am testing for miniature [ under 6" - 15 cm ] trees. Thus far okay, but nothing to show.

They like to be fed on their own leaves. So as I cut, I compost and then sift months later for re-applying to the soil's surface, or just place the cut foliage on the soil.

Try seeds available at Chinese or Indian stores, used as sweets or ask George for some.
When they sprout, immediately give me a shout and I will let you know what to do to keep them small.

Much easier than ficus - chuckle.

Then there is the - Gmelina - called the indoor Maple by the Chinese , you would like it,
BUT Schoolwork comes first, says Mr. Wu Yee Sun [ you can google him and Man lung ]

We both seem to have started Bonsai at around the same age.
Save I may have an advantage - a very tall Grenadian maid, who every year would plant, peas, corn and pumpkin, so from an early age I was in the soil. She stayed with us, until I was about 11 years old, and then got married and had her own children.
Came to look after us, when she was about 19 or so.
Enough memories.
Later.
Khaimraj