In the beginning of winter we went to the Oorlogskloof Nature Reserve in Namakwaland here in the Cape.  Me and my hiking partner.

You pick up the key for the Nature reserve at the little Cafe in the Nearest town which is Nieuwoudtville.  Then you drive about 30km dirt road and lock yourself in at the Nature reserve which sits on the edge of the Mountain escarpment, including a Valley or 'Kloof' as we call it. (I have talked about it before)

You sleep in a restored barn with thatch roof and clay walls, no electircity, and your outhouse is in the bush where a colony of very hungry mosquitoes live.  So it a matter of hit and run before your bum gets eaten....

We went there to collect a specific Chonophytum, the smallest one in the world....which is another story.

In the beginning of winter the Rainy season just started and all the plants are just waking up, out of their summer slumber.  Its still very dry.

The day before we left, I picked up this beautiful piece of deadwood, that I thought would work wonderfully in my Aquascaping.  You attach Java moss to create and underwater Bonsai to deadwood.

At home I noticed something that looked like dried up leaves in the one corner, and at closed inpection I realized it was still alive!!!!

I followed the live vain on the trunk to the roots to find out where it will root, so I potted it up.  Making sure the live vain touches the ground.

Anyway whilst this is happening, There is this Top Class photographer Jac de Villiers, busy with photographing some of my succulents, because he wants to exhibit the photographs.  So he always takes the plants with that slight defect,  the dead leaves, that curls, and the colour that contrast, he is actually very good and the plants looks awesome in his work.

So he took this Stoeberia ( which I classified only after the leaves unfolded and started to grow..) and Photographed it... and look how beautiful... 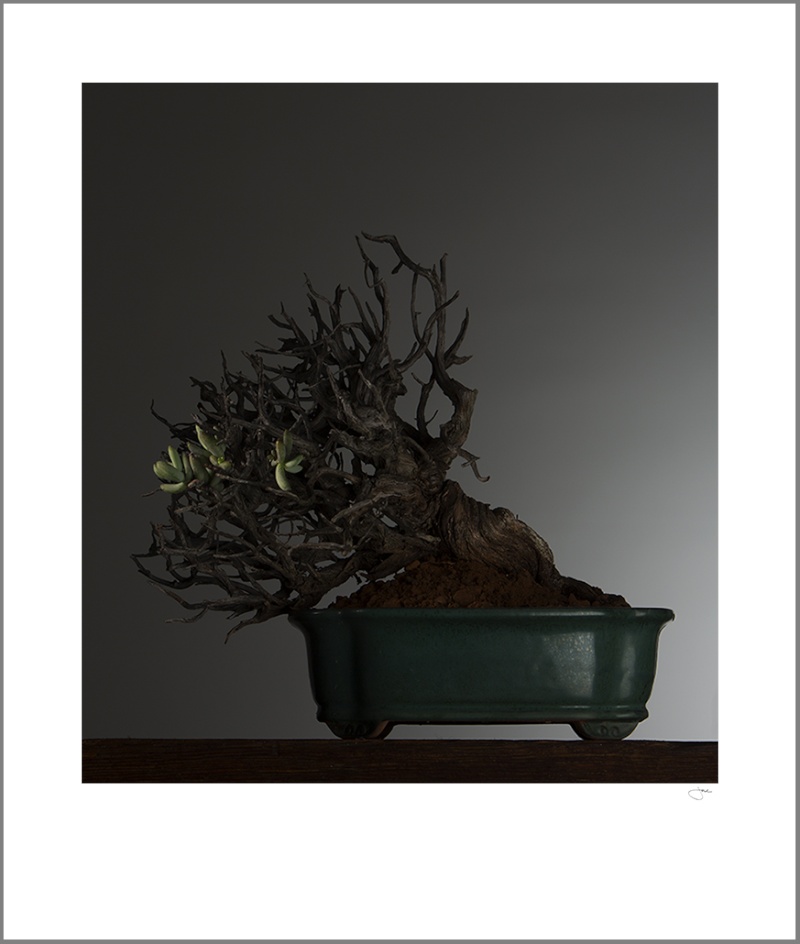 some folks use the term "took my breath away" without there being any real gasping involved...

this made me literally gasp as it scrolled up into view from the bottom of my monitor...

after the photo is exhibited, can you ask permission for us to post it on our blog ?

it is quite and extraordinary photo, and can you imagine it blown up to A0 size!

And yes of course we can put it in our blog, lets just wait a while, Jac is in Namibie at the moment, photographing the Welwitschia in the desert.

I was not at all familiar with Stoeberia arborea, so I had to hit google and found an article. Says it is quite rare, seldom seen near roads. Really nice find.

The article mentions that it is a mesemb - related to what we call "ice plants", One ice plant I know is Sceletium tortuosum, do you know if your Stoebaria has similar ''entheogenic'' properties? I know why you really picked this one up. (just teasing my friend). I do know the Karroo is full of poisonous, edible, and medicinal plants, all wildly different from anything we encounter in the northern hemisphere.

Oh and did you find that Chonophytum?

Thanks for your nice words my friend.

The whole discovery was quite amazing, first thinking that it was a dead piece of 'driftwood' , and then it climbed out of the ashes,  so now she will be called ........'the Phoenix'

Got Sceletium growing in the garden, and do now and then, pick a leave and eat it, more so, when I stopped smoking, then the little ground cover hardly had time to grow, hihihiii The effect is more like smoking a cigarette...

I can imagine dancing around a fire on drumbeat going into a trans, it will definitely bring you closer to the Gods..

We did found the Conophytum swanepoelianum, and it was already discovered in the 1950's....   darn!  It was identified by  the expert in the field of Conophytums who is, can you believe it, an American!  Steven Hammer.  An American is guru of an African plant.  Figures.

hi hi  And he truly is, I have his books!

I do have my doubt on this matter, as I can see no similarity between my discovered specie and swanepoelianum, which is much bigger!
Anyway I did send specimens to the Kirstenbosch botanical lab for DNA analyzes. But I don't know how serious they take it, it is quite strange. The Curator of Kirstenbosch even came to fetch the plants himself, and he also thought it to be a new species.

Anyway, nobody said being a discoverer is going to be easy, look how it turned out for Livingston... hihihihihi 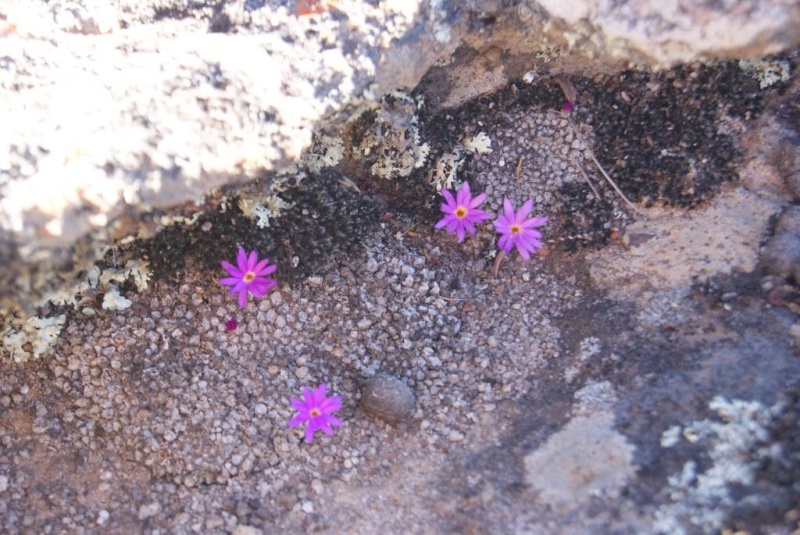 Andre Beaurain wrote:Got Sceletium growing in the garden, and do now and then, pick a leave and eat it, more so, when I stopped smoking, then the little ground cover hardly had time to grow, hihihiii The effect is more like smoking a cigarette...

I can imagine dancing around a fire on drumbeat going into a trans, it will definitely bring you closer to the Gods..

congratulations on quitting smoking (i assume you mean cigarettes)... which is only the governments form of population control, designed to not kill you until you are done contributing to the collective coffers...

and i must say you have piqued my interest in this khat tree that you speak of...
(purely for scientificalation reasons, i assure you

sadly Khat is not legal in most of the USA. Like you I never got much of a buzz from Sceletium. I over watered mine, and it rotted away. A hazard when it is in with the orchid collection. I could replace it, it is available in the USA, but haven't bothered.

The conophytum is totally cool, monster big flowers, on beads that look like gravel. Neat discovery.

Yeah, identifying a new species is a labor of love, and the competition in some circles is fierce. Orchid fanatics go through great lengths and skulduggery to plant their name on an orchid. Google history of Phragmipedium kovachii. Peru government -IRENA- was working with botanist Eric Christensen, and M. Kovach stumbled on a plant in a Peru market. Kovach smuggled it home and brought it to Atwood, who knew Christensen was working on it with IRENA. Atwood frantically produced a description and special edition publication, scooping the IRENA approved publication by 10 days. Atwood's publication as Phragmipedium kovachii was deemed to have priority. The name for M. Kovach was it, instead of Phrag. peruvianum as the Peru government had requested. For their effort M. Kovach ended up in court for violating Lacey Act, (CITES) and ended up paying several thousands of dollars in fines & large lawyer fees, but avoided jail. Atwood lost funding for knowingly working with smuggled specimens (CITES rules), the institution he worked for got a black eye and lost significant funding. It was drama all around. Christensen was remarkably resigned to the name scoop, but did indulge in schadenfreude over the fate of Atwood, he felt bad for Kovach who was somewhat clueless in what the process was going to bring down on him.

Hopefully the succulent world is not as cut throat as the orchid world.

Wonder photos, would love to see more if time permitted.

Appros of absolutely nothing, when I was 3 years old (that's 75 years ago to you kids) I learned to say "Mesembryanthemum" and drove my parents crazy for about two weeks.

That is a gorgeous little bonsai Andre. Congratulations.
_________________
Jim Lewis - lewisjk@windstream.net - Western NC - People, when Columbus discovered this country, it was plumb full of nuts and berries. And I'm right here to tell you the berries are just about all gone. Uncle Dave Macon, old-time country musician

I cant believe that Khat is illegal, so strange, I guess one can't illegalize something that is indigenous. Thanks for your words Leo!

Thanks Jim, did ya parents teach you botanical names as a child? Or just genre.... hihii

Hey Andre, all this talk of quitting smoking, inspired me to replace my long ago extinct Sceletium. I ran into a deal on a plant that was already 10 years old. It came bare root, so I put it in an YiXing pot. 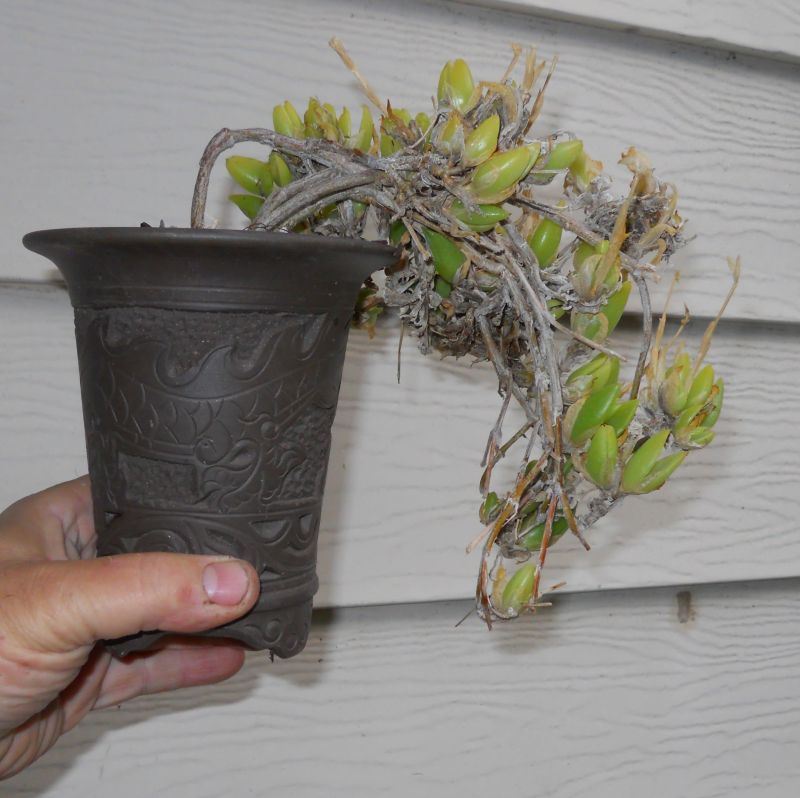 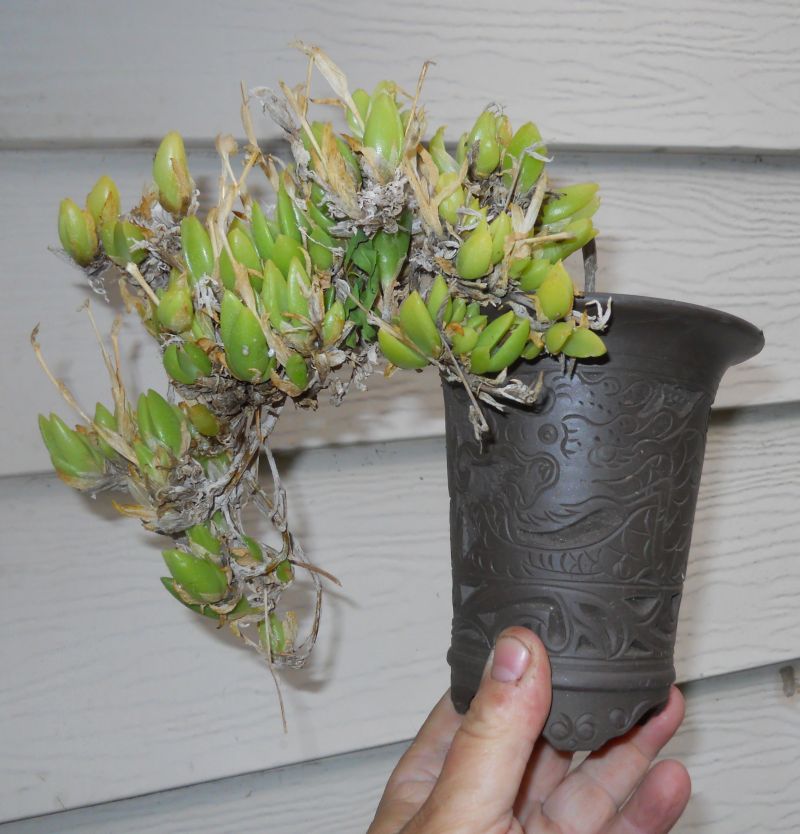 I put a longer write up of this one on the Arbor Arts Blog.
http://arborartscollective.blogspot.com/