I'm looking for photos of formal bonsai displays where a chawan ( tea bowl) is used as an accent along with a scroll, etc. Empty bowls that is, not planted with anything.

I have never seen a tea bowl displayed with a bonsai wether formal, semi formal or informal styles.

PS: That does not mean it can't be done.

Thanks Bill.
One on my FB page from Best Of British Bonsai 2011

I guess it's time that it is done more then?!

Not a toko no ma display, but a meditation area of a customer that had two scrolls commissioned for their in home dojo...I tried to clarify if this pottery was to hold incense... 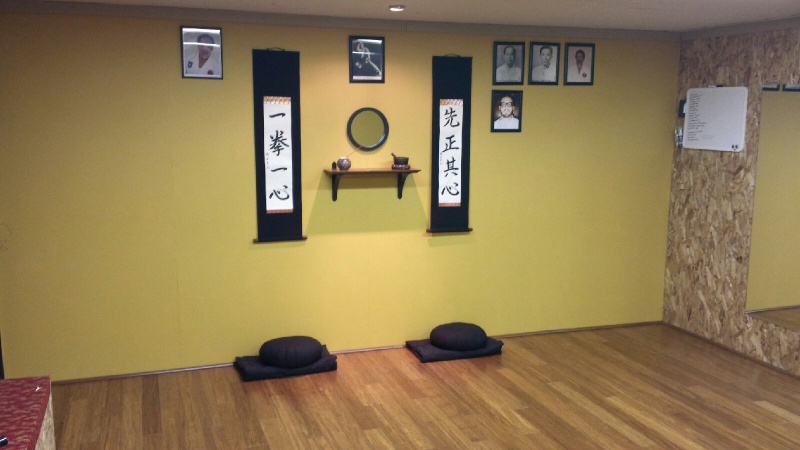 Jonathan, I remember seeing this on your page not long ago, but not really what I'm looking for. But thanks for the response.

Typically a tokonoma is used as a conversation piece during a tea ceremony. The focus of the tea ceremony is the chawan being used. This is why you don't see tea ware and utensils in a tokonoma. The exception being the vase of flowers.

But I'm not talking about a tea ceremony, I'm talking about a bonsai display, and it doesn't have to be shown in a tokonoma?
Just an accent or object of art displayed with a tree/scroll.

I occasionally have use pottery as part of a display.  This one has two -- a bottle that Jackie made and a  porcelain Japanese tea caddy.  This is from 2007. But it still doesn't answer your original question.  I can see no reason not to use an attractive bowl.
_________________
Jim Lewis - lewisjk@windstream.net - Western NC - People, when Columbus discovered this country, it was plumb full of nuts and berries. And I'm right here to tell you the berries are just about all gone. Uncle Dave Macon, old-time country musician

Dale Cochoy wrote:But I'm not talking about a tea ceremony, I'm talking about a bonsai display, and it doesn't have to be shown in a tokonoma?
Just an accent or object of art displayed with a tree/scroll.

I was just explaining the reason you don't see it. Correct me if I'm wrong, but the tea ceremony is one of the main reasons we have bonsai.

Maybe another reason is that a bowl is empty. It doesn't have the mystery of a closed container and it would be vulgar to use for ikebana. However it can convey a sense of season. I think that in the right situation it would be interesting to see chawan displayed with bonsai.
-Preston

Moderators would need to provide permission to post pic of page 71 of Gaddou Kyouhon, but it meets your requirement. Here is another...that I sent you via PM...sorry no bonsai, but that would be the norm rather than the exception. 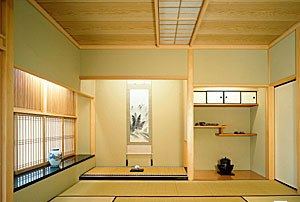 Moderators cannot grant that permission. You need the permission of the owner of the photograph -- in this case, probably the publisher of the book.
_________________
Jim Lewis - lewisjk@windstream.net - Western NC - People, when Columbus discovered this country, it was plumb full of nuts and berries. And I'm right here to tell you the berries are just about all gone. Uncle Dave Macon, old-time country musician

From a cultural perspective

Hi Dale, I only now saw this thread. I haven't been on IBC for a while due to illness.

I'm not sure if you were looking for a historic explanation or a display style.

I do know that tea cups can be part of a Hinamatsuri display which honors girls with a glimpse of royal court life of which things like ikebana and bonsai are a part of. It's really dependent on the wealth of the girl's family and heirlooms that determine how much detail is crammed into a Hinamatusri display. Even pop culture like Hello Kitty makes it into contemporary Hinamatsuri displays. Girls have a chance to have a little tea party with a replica Japanese royal court on girl's day in Japan and wish for a bright future. Miniature bonsai replicas, ikebana, miniature tea cups and cakes occupy the tier near the court musicians. Sometimes the bonsai replicas and ikebana are placed at the lowest tier or near the Emperor and Empress on the highest tier especially if the bonsai is a real mame tree and not a replica. I really don't know if the royal court displays bonsai like that. You would need to get in touch with Bonsamurai (Stefan Sandstrom) for that. He's been honing his kendo skills on the palace ground these days with the palace guards. He is studying to be an MD in Japan while moonlighting as a Kendo teacher and some kind of biomass entrepreneur in Sweden. He is too busy jet setting to take care of bonsai.

A wiki commons picture of a Hinamatsuri display with pretend bonsai and other minitures can be found at the following link: http://upload.wikimedia.org/wikipedia/commons/d/d9/Hina_matsuri_display.jpg 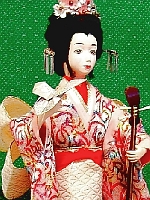 WELCOME back Geoline. Hope all is well now.
_________________
Jim Lewis - lewisjk@windstream.net - Western NC - People, when Columbus discovered this country, it was plumb full of nuts and berries. And I'm right here to tell you the berries are just about all gone. Uncle Dave Macon, old-time country musician