I am not sure this is posting correctly but...
I am looking for some bonsai that do well indoors. I know that most Bonsai trees are meant for outdoors but I have heard of a few like the Hawaiian Umbrella tree.
Any recommendations?
This could also include Indoor Bonsai which can sustain themselves indoors part of the time if they get enough indirect light. if anybody knows, it would be you folks out there.
Or Bonsai which can sustain themselves indoors for a week or see and then moved outside.
I live in Southern California so it never gets really cold.

Anything would be helpful.
Thank You
ed

Any tree can be placed indoors for a week or so. That is never a problem, unless you move them from very cool moist outside to dry (heated) inside.

As for trees that may survive a stay indoors for much longer, think (sub) tropical species. Most notably: Ficus spp. Any temperature climate species will need the seasons to thrive, and most of them, to even survive. 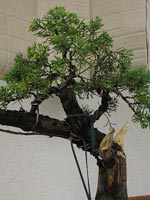 Yes, Schefflera species is your best option. Then, as Leatherback said.. Ficus, but not all!

Yvonne has some beautiful ficus bonsai that she keep indoors, look at her posts.

Andre Beaurain wrote:Yvonne has some beautiful ficus bonsai that she keep indoors, look at her posts.

But bear in mind that Yvonne lives in a vastly different climate to yours.

To those who have responded to my post as of date:
Khaimraj Seepersad, bought the book on Amazon this morning. I will add it to my growing collection. Thank you
Fiona, Thank you for your advice. What I can see from your posts, your Bonsai do not look beautiful---they are BEAUTIFUL.
PS: love your website.
Andre Beaurain, thank you for the info. I sent a pm to Russell and Yvonne.
Leatherback. Thank you for your info.

For ficus, this is good http://www.bonsaihunk.us/book/BackInPrint/Add2Soft.html

I've had pretty good luck with Ficus. F. microcarpa seems to do pretty well, especially if you provide it with a greenhouse-like environment. You can achieve this with something as simple as a fish tank with gravel and water in the bottom, a clear plastic bag over the top, and a plant grow light. I would recommend picking up a hygrometer and a thermometer if you decide to make a greenhouse though, as high temperatures can easily kill plants. I'm also trying out a few things like water jasmine(Wrightia religiosa), and other varieties of ficus. As far as ficus go, they're pretty difficult to kill from what I've seen. You won't get the massive aerial root systems out of them without a high humidity environment or a bit of extra work though. 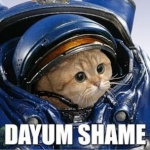 Great idea. I've now taken the Jerry Meilik article which Jim quoted and put it into its own thread.  It can be found here:

Please note, the item is no loner available at the thread linked in the quote above.

Once again, I would like to thank:
Jim for the link. I copied it down and reading and digesting it
Frank9999, I clicked on the link and copied down what it said about Ficus which has then lead me to look at several other sources which I know will be helpful.
and again I would like to thank Yvonne for responding to my private PM and am presently copying down what your posts say and will study them.

Anyone lese who has indoor Bonsai and would like to contribute, I would be most grateful as those who do have first hand knowledge, your insight and experience is has value beyond words.
(even though a thousand or so would probably do the trick)
ed

I haven't been into bonsai for very long, but last year I keep a variety of tropical plants (prebonsai material) inside over the winter. I put them all on a wire rack with a two bulb t5 fluorescent shop light above them. They all did pretty well with minimal leaf drop. They didn't grow as fast as outside, but they did put on new growth. I didn't worry too much about humidity, but I did keep a small humidifier nearby. Not sure if it actually helped out or not. 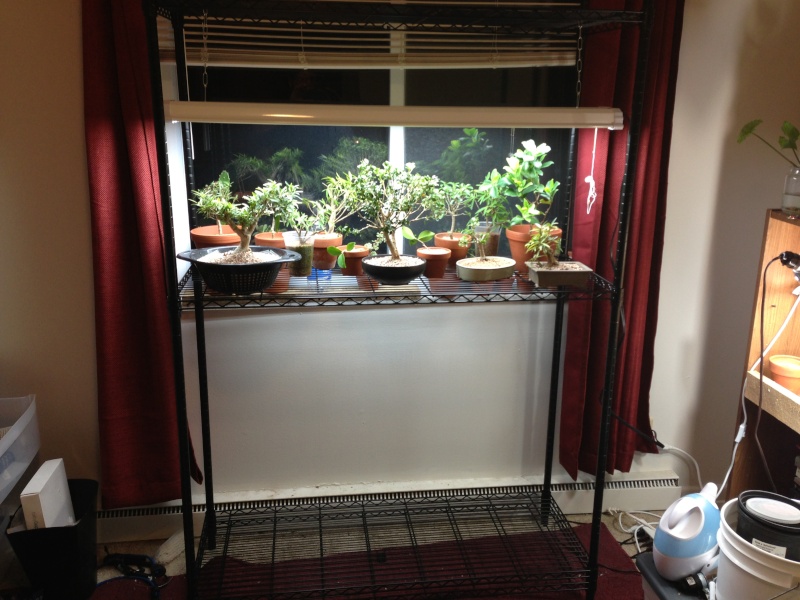 This year I think I will increase to a four bulb setup since I have acquired more plants.

If you have any questions about my setup feel free to ask.

First, I would like to thank Russell for responding to my PM.
Second, Yvonne, your Ficus are BEAUTIFUL!
I have one follow-up question for Kennedymarx: what type of Bonsai are you growing in the setup you have in the picture

Lastly, again for KennedyMarx...love your Avatar!

Great idea. I've now taken the Jerry Meilik article which Jim quoted and put it into its own thread.

Many thanks! It's helpful to have info like that readily available and easy to find, and I'll probably continue to reference it in the future.

Not trying to thread-jack, but are you involved in the state bonsai societies KennedyMarx? I've been thinking about joining if my schedule ever allows, but I was curious about the overall quality of the club. I've mostly been doing my own thing, but I'm considering trying to attend a workshop on F. phillipenensis being held at Eagle Creek Bonsai later this month by Scott Yellich if it's not too far out of my league(probably even if it is). Also, what were you using to catch the excess water on that setup?

Ashlod, I am a member of the Indy club. I actually live almost two hours away, but I make the drive once a month for the meetings. There are a couple guys there that have been into bonsai for 40+ years, but there are also people that are new to it like me. Scott is actually the president. He's into tropicals and knows what he's doing. I think he's been into bonsai since the late 80s or early 90s. The club just had an exhibit at the state fair. As far as I know all of the trees there were from club members. I posted some pictures of the tropical/indigenous exhibit on my blog here: http://indianabonsai.com/2013/08/08/indianapolis-bonsai-club-exhibit-at-the-indiana-state-fair/

I usually wouldn't water the trees while they were on the rack; I would put several of them into a small dish tub and carry them into my kitchen to water them in my sink. Sometimes I would fully submerge the pots if I was feeling particularly lazy about watering them. There were a few times I did water while they were on the rack and I would just sit the dish tub below them to catch the water. My indoor stuff is probably going into my basement this year so I won't have to worry as much about excess water.

If you don't know my credentials, I have been growing under fluorescent lights for over 50 years, bonsai for about 24.
Everything goes outdoors for the summer (May to September-October), bonsai, orchids, & miscellaneous. The only exception is Phalaenopsis (a kind of orchid), which can't tolerate rain falling into the crown, two African violets, and a micro-mini Sinningia. They are summering in the sunporch, along with a Korean hornbeam forest that was not adequately tied down & fell over. It will be repotted next spring.
This discussion has centered on which bonsai species will tolerate indoor culture, especially year-round. There is one aspect you are missing. The goal of bonsai culture, aside from keeping the tree healthy & properly styled, is to get the leaves as small as possible, the internodes as short as possible, the trunk as sturdy as possible, and the twigging & ramification as profuse as possible for the species. This cannot be done indoors, except with HID lights. You can't get optimum results even with an unobstructed south-facing window, since the window cuts out UV light. Another factor to consider is wind. You don't want a gale, but the constant exposure to gentle winds is to a live tree what exercise is to a muscle. Research has found that trees on windy hillsides have denser stronger wood than trees in calm valleys. You can get a nice healthy Ficus by growing it in a terrarium, but go to a show and look at the trees that are grown outdoors & you will see the difference. By all means, grow whatever indoor bonsai you can, but if at all possible, get them outdoors for the summer. For some Ficus & other tropical species, it may not make much difference, but for others it does.
Iris

bonsaisr wrote: This cannot be done indoors, except with HID lights.

Thank you very much for the information Bonsaisr or Ms. Iris is that is appropriate. I will look into the HID lighting, LED and the Ultraviolet question concerning types of windows. I know that various types of window glass will inhibit ultraviolet rays and that has a definite effect on the growth of plants. Anything you wish to add, or research links you would like to add, I would be fascinated to read.
I do not doubt in anyway your years of expertise.
Again,
Thanks!
ed