We have been taking photos for my upcoming new book and today my Rough bark Japanese maple, Acer palmatum 'Arakawa', looked pretty good. After taking a formal photo I brought it inside the studio to display when David Knittle dropped by. He built the tokonoma in the studio and I wanted to have a nice colorful bonsai for his visit.

The bonsai was started from a cutting about 40 years ago and has been completely container grown. More training details on this bonsai and the rough bark cultivar will be explained in the book.

In the meantime, I'd like to display today's beauty of this Rough bark Japanese maple with you. 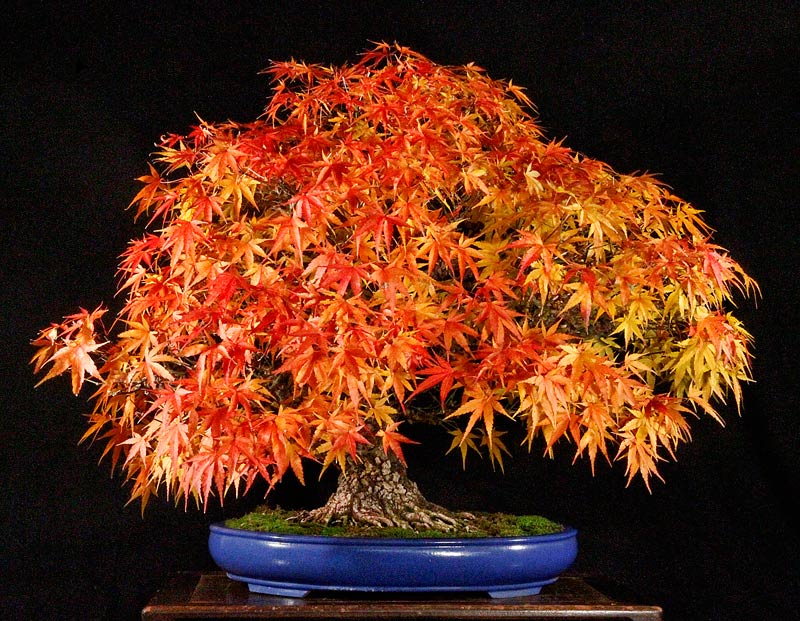 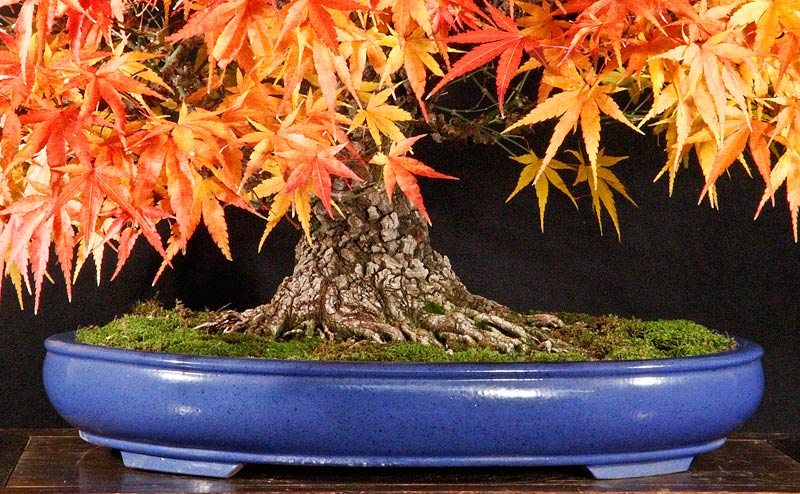 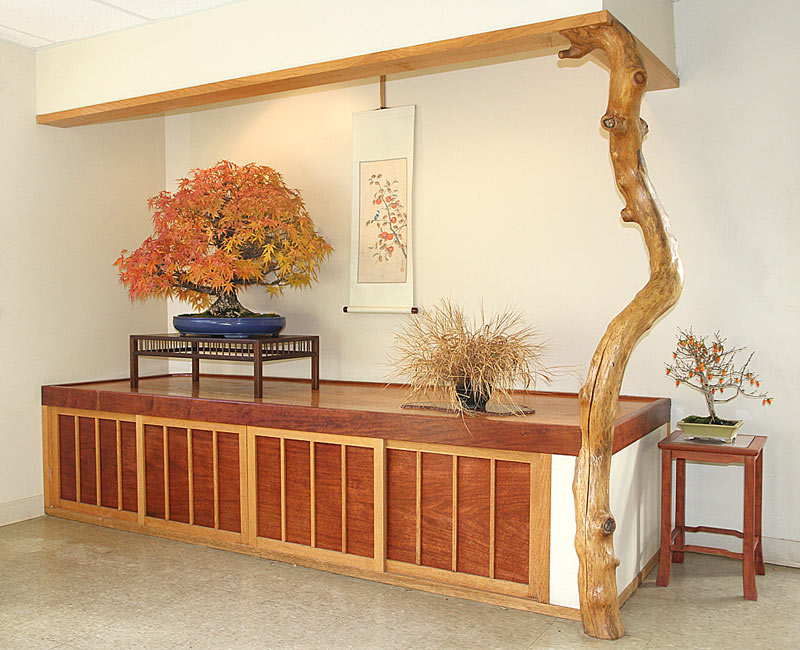 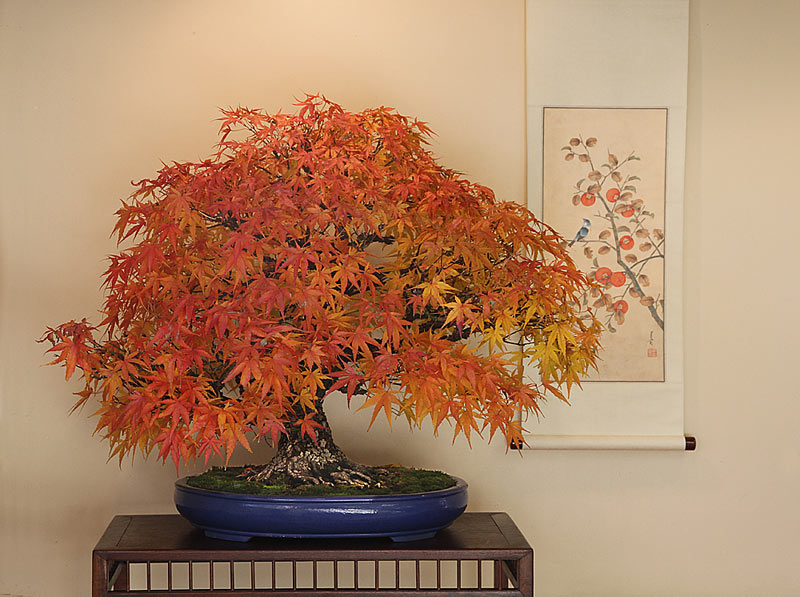 Hope you have a micro photo of that marked off ne Arawaka in the book, and a side by side of the in the ground and in the container comparison for growth! I'm looking forward to the book, it was really fun to be there for some of the photos...despite the fact that I had trouble leaving the pot attic...
Don't forget to shoot me those chops, anytime!
Ryan
http://japanesebonsaipots.net/

I do not know much... a beginner am I... for what my words are worth of?
But let me say that, by my aestheticism, this upholding "stick" is indeed brilliant!
Its roughness compliments so very well -by opposition- the delicate foliage!

Mr. Valavanis, I am always inspired by your dedication to cultivate such remarkable trees out of cuttings or from seed!
Its such a virtue your patience and vision.
Thank you for your time.

TOKONOMA AND SHIN GYO SO

SHIN GYO SO HARMONY can be used between tree and pot, but also for tokonoma and tree.
The beam of the TOKONOMA is SO , and the tree is GYO .
It's very difficult to have a TOKONOMA for all the trees styles , it's just an advice , your tree is amazing 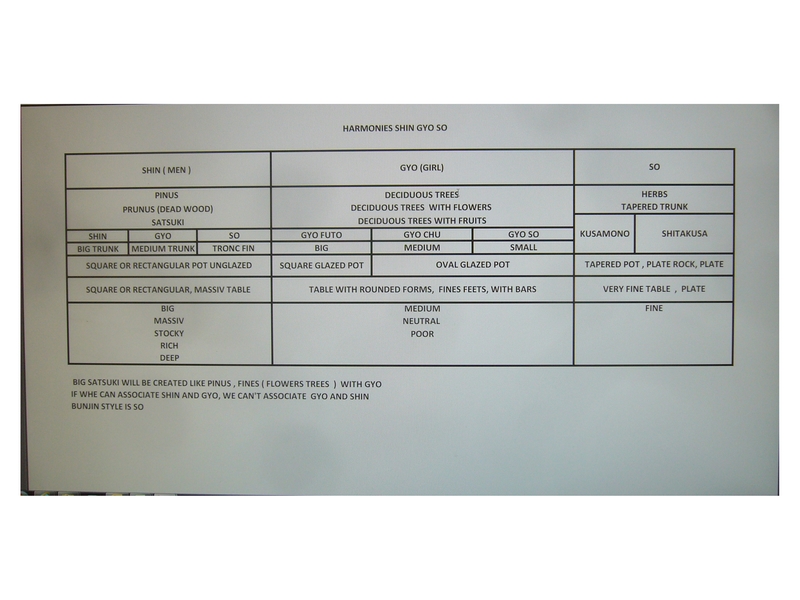 Is that little tree off to the side a part of the display?
_________________
Jim Lewis - lewisjk@windstream.net - Western NC - People, when Columbus discovered this country, it was plumb full of nuts and berries. And I'm right here to tell you the berries are just about all gone. Uncle Dave Macon, old-time country musician

Is that little tree off to the side a part of the display?

I'm curious,too! I think it's a diospyros kaki.. is it?

I'm pleased my Rough bark Japanese maple gave you some late autumn pleasure! It still looks good today and has been in bright color for over a week, which is kind of long, it all depends on the weather. We had 28F yesterday and a heavy frost this morning, still the maple looks good.

The small bonsai outside the tokonoma is an accent. It's a Princess persimmon, diospyros rhombifolia.

Very few homes and even bonsai gardens in Japan have all three styles. It is indeed rare to find all three in one locality.

My main indoor tokonoma (also have two miniature tokonoma and an outdoor one too) is special because the post on the right side was a tree I grew from a young graft. It is a Camperdown weeping elm which I staked upright and made a striking garden tree in my mothers garden when I lived at home before getting married. It unfortunately died because of Dutch Elm Disease and I just kept the wooden log. When I got married 25 years ago and we built the bonsai studio that wooden log was a perfect addition which created a unique focal point with a special meaning.

It's interesting that when David Knittle came to build the tokonoma we spent an entire day playing with the positioning of the post. Turning it any way made a difference, because it's also visible from the side going and leaving the greenhouse. So, we worked on positioning all day and at the end my wife Diane came in and said why don't you try it this way. Well, Diane got it right on the first try! She often has good ideas and sees things in a different way.

Anyways, yes, there are different styles of display. Ideally it would be great to display bonsai formally. However, and practically speaking very few American homes have display areas, and more importantly display tables are difficult to find and expensive too. I'm not even going to go into the scroll selection....

So, we must do with what we have available, most don't even have what I have available. And, it's fine to borrow or often lend a friend a display table for an exhibit. Attached are "some" of my display tables I've collected during the past half century. They are arranged by groups, cascade, root stands, medium size, shohin box tables, shohin tables, etc. There are many more bonsai display tables in the bonsai studio, office, photo studio and in the home. 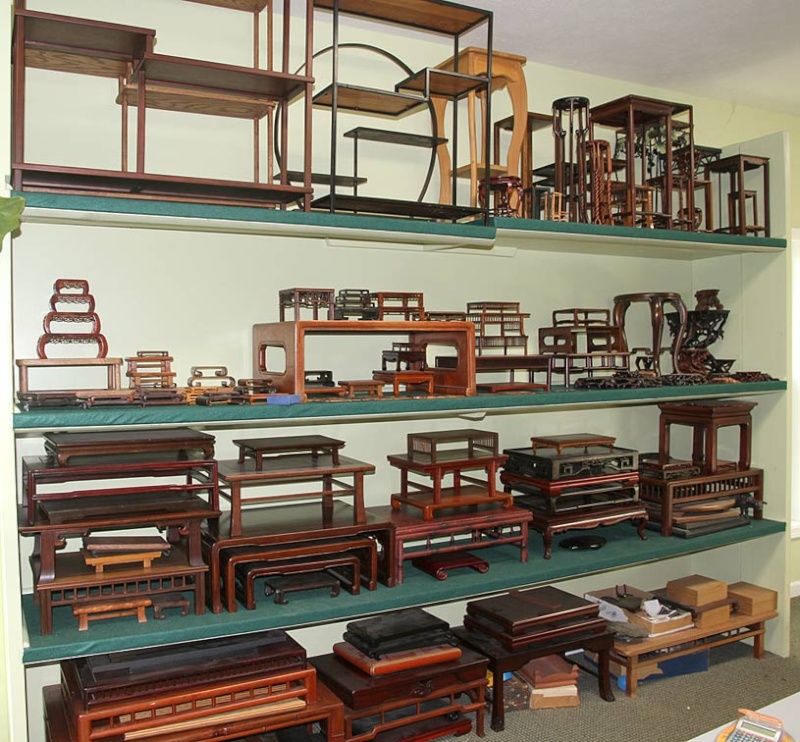 Had no idea you had that many tables! Quite a collection. You must be just about out of storage room...

As usual, your display is outstanding!

A tree that inhales maturity and passed time. Wonderful the tokonoma, mine compliments Bill

As an avid woodworker I have "noticed" (maybe even fondled once or twice) that twisted Elm post while up at Bills place. It's great to finally hear the story of how it found its way into the Tokonoma. 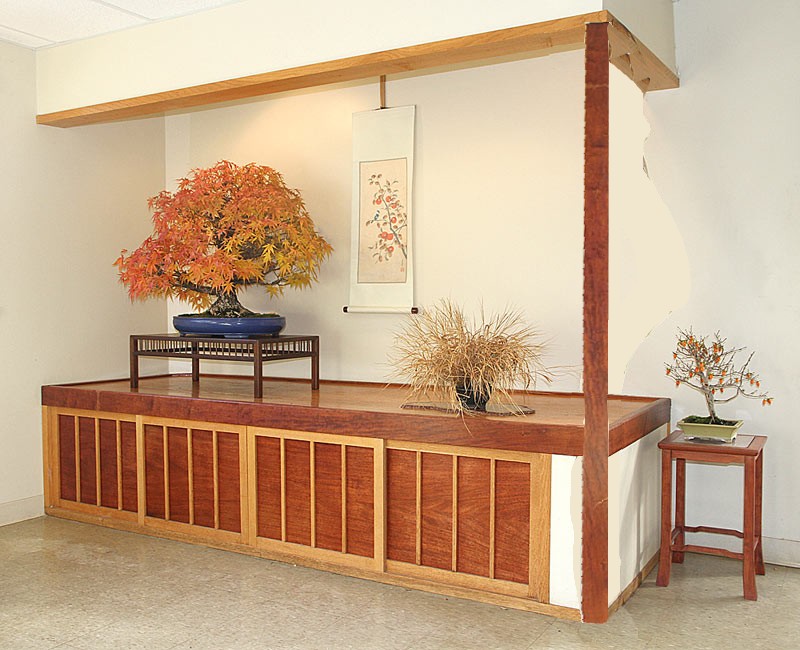 I like very much, you had your own gnarled stick, with a nice story to it, for the finish of your tokoname. The old japanese tradition is followed nicely.....LOVELY.

I'm in the "throws" of designing a new tokonoma. I admire Bill's as ideal for western homes with it's raised display surface and storage underneath. I'm struggling the loss of my nicer 7 foot scrools because his display
area is only 4 foot tall, thus negating their use.
Also considering a removable biwa for a little storage and use when needed to remove a tenpai away from central display area. Lots to think about and one time to get it right...

dick benbow wrote:  I'm in the "throws" of designing a new tokonoma. I admire Bill's as ideal for western homes with it's raised display surface and storage underneath. I'm struggling the loss of my nicer 7 foot scrools because his display
area is only 4 foot tall, thus negating their use.
Also considering a removable biwa for a little storage and use when needed to remove a tenpai away from central display area. Lots to think about and one time to get it right...

Seems redundant to me to put two storage spaces in one area for viewing....Go with Kekkomi toko and biwa. Keeps available use of your 7 foot scrolls. Which way do most of your trees flow. That would determine where you want to put the light space, unless you can think of a way to make use of alternative light source and alternative set up...What kind of a jinzai are you going to use? I can get one for you for a decent price.

I'm leaning toward a toko that allows me to use my 7 footers.

My light source is on the left but am considering a row of lights in the valance unseen but available.

I'm right handed so for some reason the majority of the trees tend work from left to right. ???

I tried looking up Jinzai on google but was not able to get a translation....

I do have a call into you so maybe we can talk. Will appreciate the resourse.

dick benbow wrote:
I tried looking up Jinzai on google but was not able to get a translation....

I do have a call into you so maybe we can talk. Will appreciate the resourse.

Would be happy to take a call, but I am often in the studio or away...better to email me so we can coordinate a time to discuss in detail.