Glenn Reusch of PVSG sent me his photo set of the recently completed set-up. 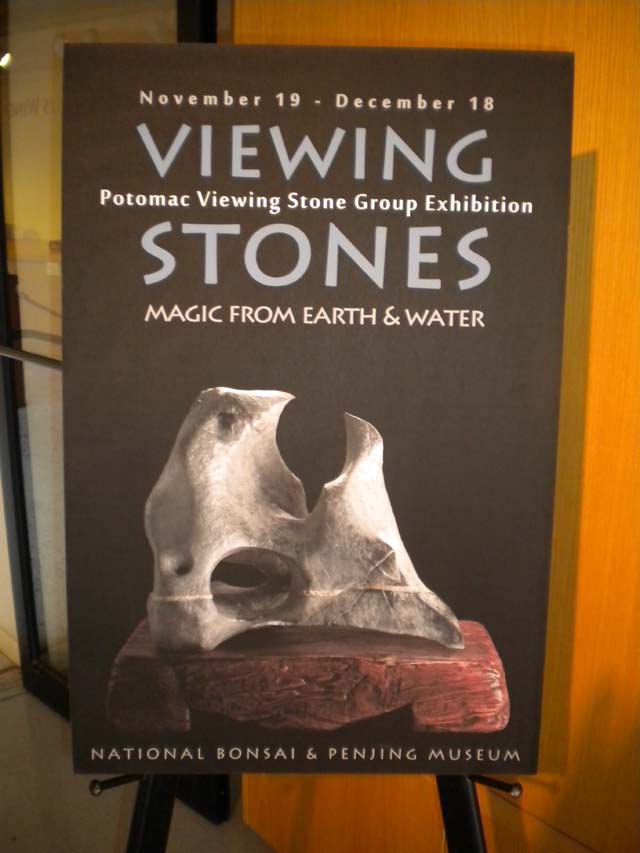 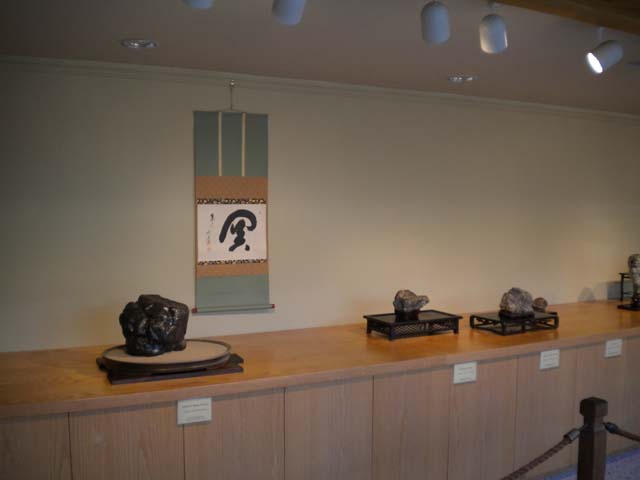 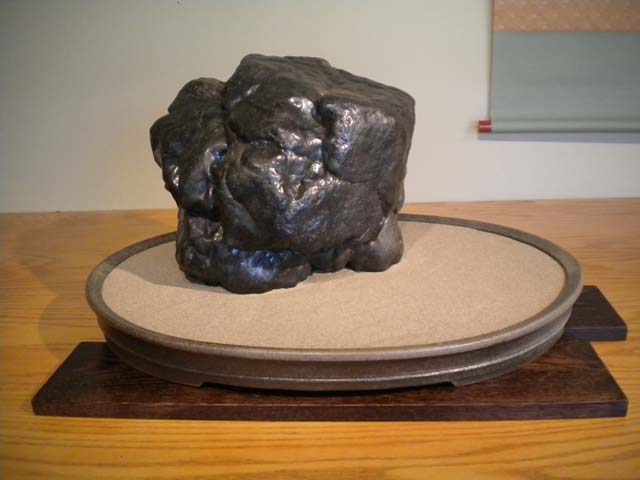 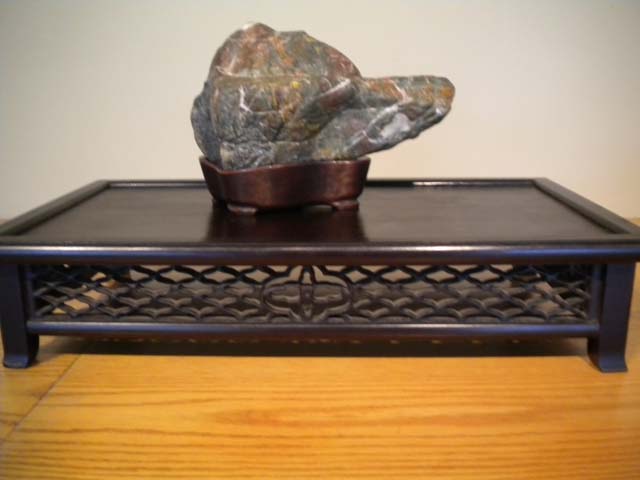 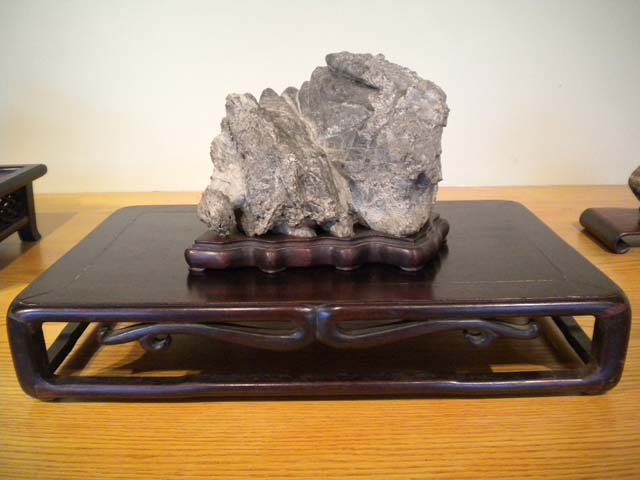 A hut stone from Virginia-- its pattern suggesting stars seen through a torn thatched roof... 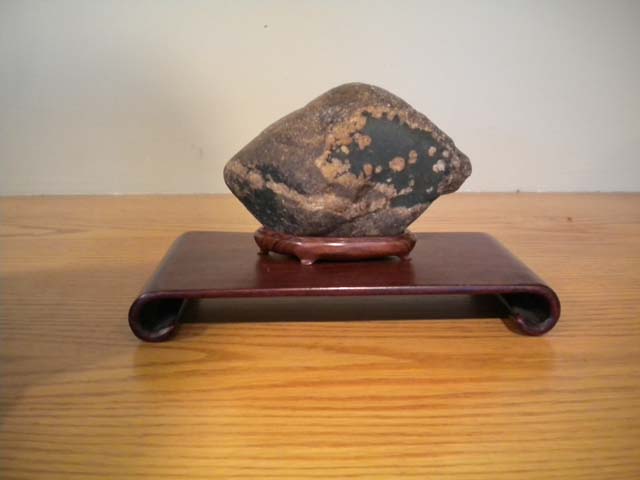 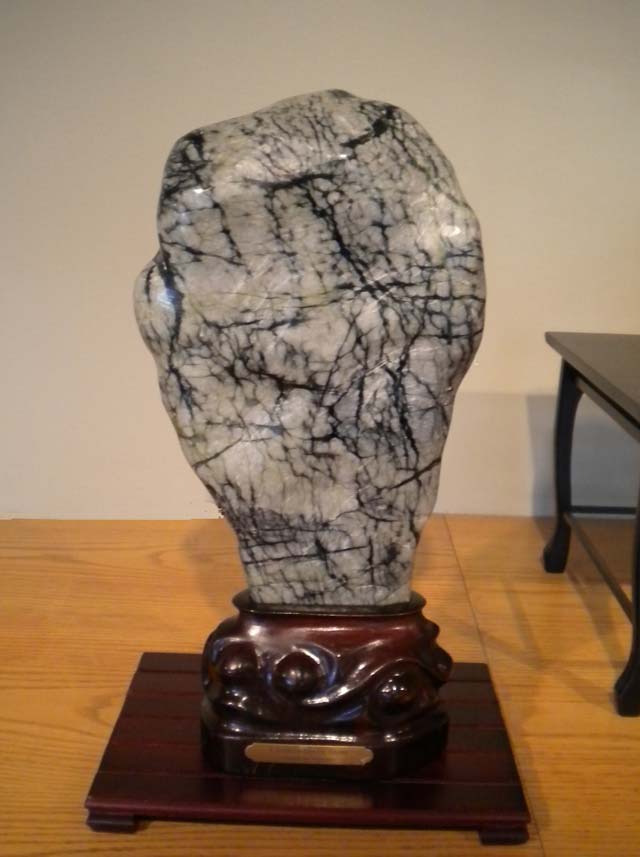 A near view mountain stone from Montana... 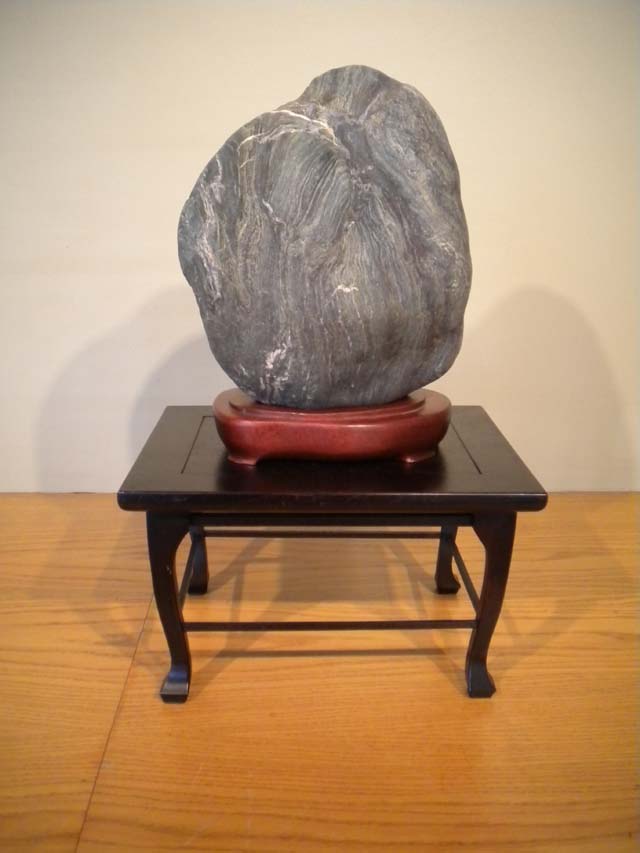 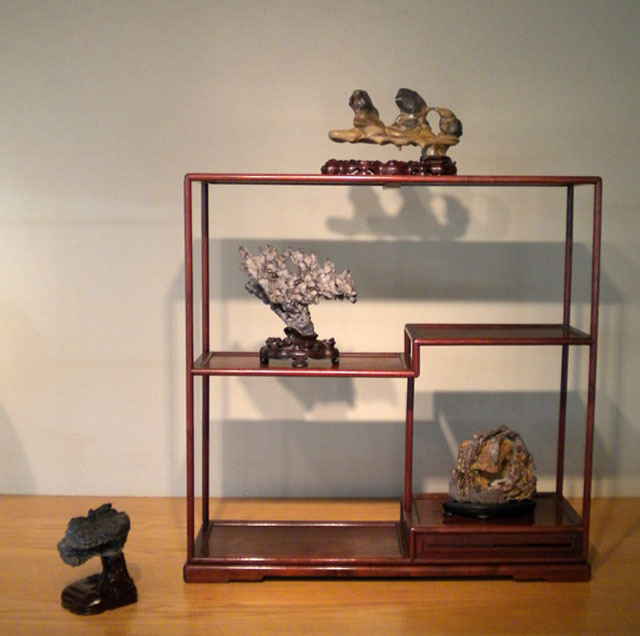 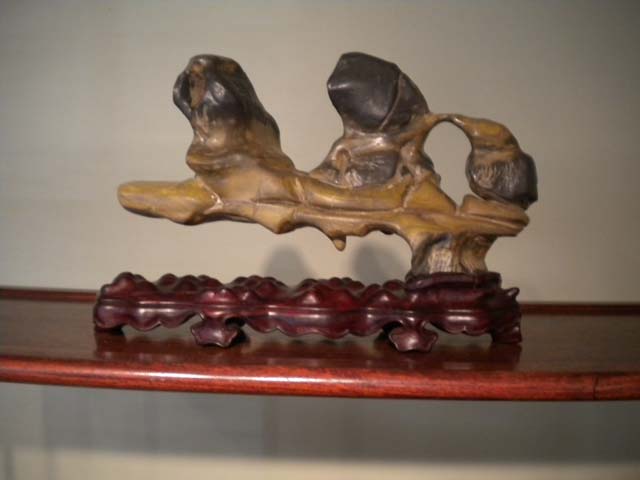 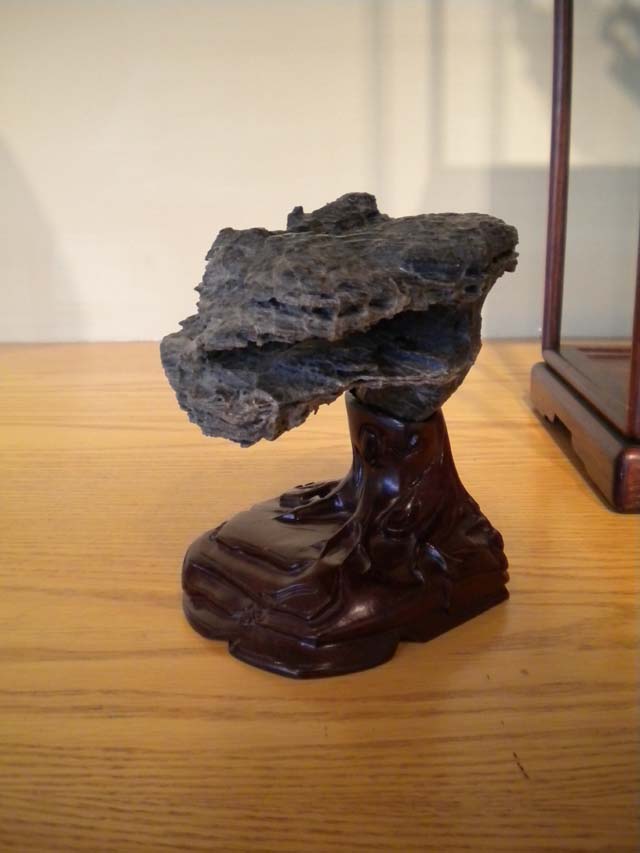 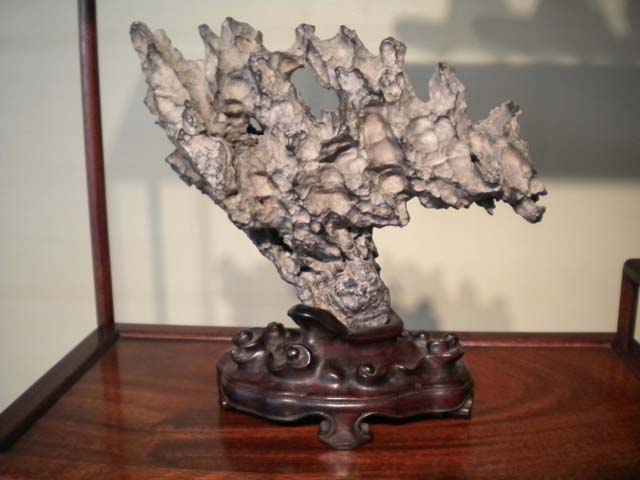 fourth (last on this table)... 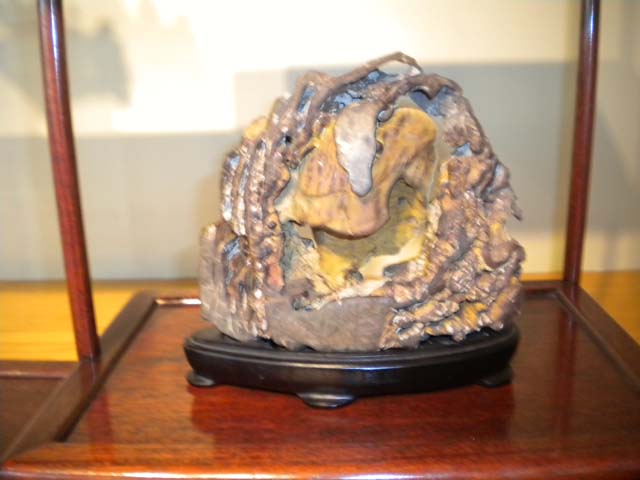 When the stone on the exhibition poster is large enough to grab attention at a distance, it is often placed at the first position on the second (central) table. It is visible at the far end of the aisle upon entering the exhibition... 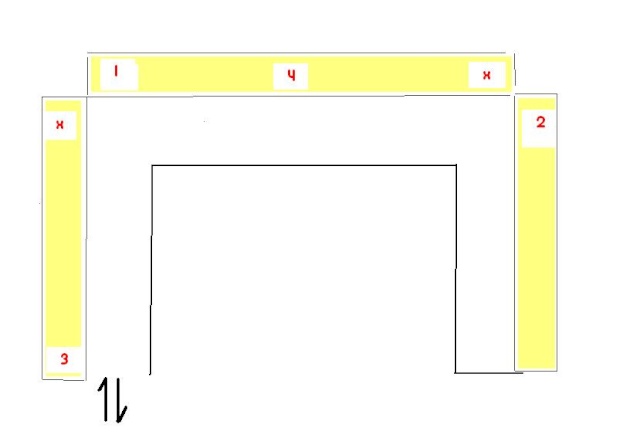 First position on the second central table-- Chinese gongshi on an old Northern-style stand accompanied by a lingzhi fungus and a Japanese scroll... 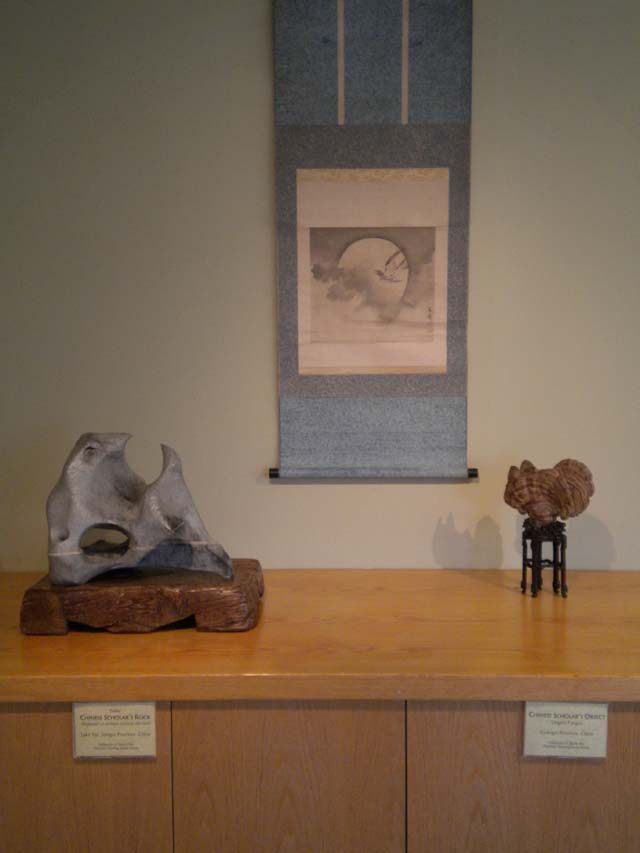 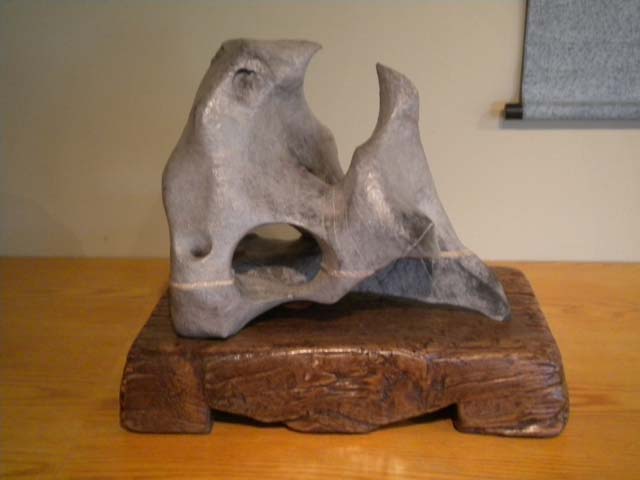 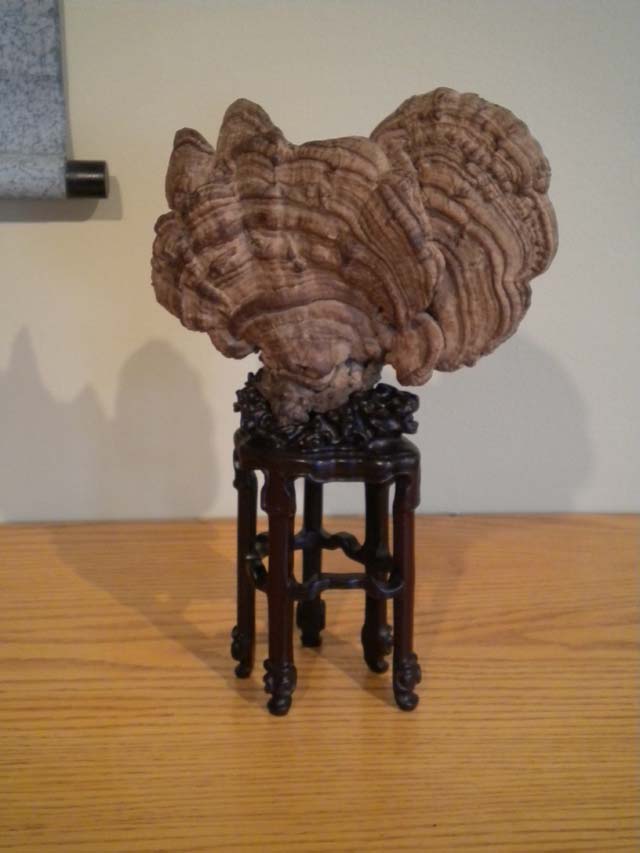 Lighting had yet to be adjusted on the stones on the original photo set, and it makes a big difference in appreciating stone photos. Since the Museum is over 100 miles distant, I couldn't shoot another set, but Museum curator Aarin Packard has. Instead of displaying stones from first-to-last or in the rhythmic vignettes that PVSG uses for display, Aarin distinguished stones & a related rattan vine object from China as distinct from Japanese & American stones.

There is a "celestial stone" that I imagined as a reflected moon image, so it is surprising to see it labelled "desert sun." I wonder what viewers see before reading the title. Arrangement distinguishes comprehension; there are exhibited stones I would prefer re-arranged.

Many thanks for sharing all theese nice photos from the exhibition.

The western stones, are the stones, I prefer...I am beginning to like more quiet western stones much better than chinese and japanese.

The "desert sun".....The stone is very pale (daylight) and is pretty much what I expect from a desertsun, not big and bright.

The Rattan Vine is interesting...I know all important suisekicollections has, at least one "dead wood- suiseki".
Resently I found a nice piece of wood, and remembered seeing one like this in a big collection, not long ago.
I did not pay much attension to it back then, but had a reminder.....
I was about to post a picture of the "dead wood" I found yesterday, before carving a daiza for it, but the photo did not turn out nice enough.
I will be very happy, if information about this is known to a reader ( Chris)....What is the name?, is it chinese tradition?....I know nothing, but will be happy to know everything possible about this kind of "missing link"

between stone and bonsaicollecting....I am sure many readers would love to know more, just like me.

thank-you Chris
for sharing......appreciated your comments on how the stones were placed in the exhibit.

Hi Yvonne... Root wood in exhibition with stones has two sources. One was the Chinese scholars' interest in naturally-contoured objects to express the energy of landscapes (chi/qi "spirit/breath of the Universe") in concentrated, miniature form. You'll find root wood along with scholar's rocks in John Hay's Kernels of Energy, Bones of Earth (China Institute exhibition & publication), Stephen Little's Spirit Stones: the Collection of Ian & Susan Wilson (Art Institute of Chicago exhibition & publication), Richard Rosenblum's Art of the Natural World and other publications.

The manager of a Shanghai stone shop who contributed to IBC helped PVSG members obtain the text Root Carving Art in China (China Forestry Publishing House, 2004). This book traces artistic natural root collection in China. The oldest is a very modestly altered piece found in the Mashan tomb of the Chu State (Warring States period) (therefore, prior to 278 BC)-- see illustration from University of Michigan library [linked HERE]. It features a mythological animal (a "Bixie") with a tiger's head and dragon's body that is very modern in its understated form.

PVSG member Daniel Bui has a world-class collection of Chinese natural root art that excites us. There was a naturally-contoured Chinese piece in the exhibit which isn't illustrated on the Museum blog. Its size & visual flow helped "close" the end of one table... 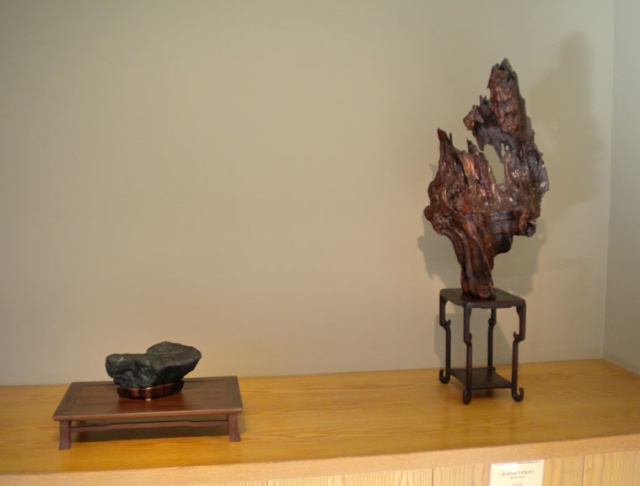 The other traditional source for exhibiting natural rootwood with stones is the Japanese literati influence. Japanese literati pieces of highest quality are associated with sencha tea aesthetics. The artist Imai Oshin added luster to the form into the 20th century. A peek at the archives for sencha/literati art objects sold by the Japanese art vendor Kagedo [link HERE] (Jeffrey Cline & William Knopse) in Seattle can still a suiseki lover's heartbeat. Read their exhibition books!

Furyu has more subtly in expression than its component kanji characters and suggests a fleeting moment when experience is beyond contradiction/analysis. Objects arranged artfully are "in furyu" rather than "outside of furyu." Appreciation of seifu and furyu from sencha (Japanese steeped tea in Chinese-style) are additions to wabi-sabi from chanoyu (native Japanese whisked tea) in appreciating the atmosphere/tone/feeling of suiseki displays.

As an element outside of established tradition, PVSG invited member (and professional photographer) Heide Wessels to mount photos on three scrolls this year to complement stone display. Perhaps, the photo I received was taken before final setup (stones appear askew), but it captures the arrangement in progress. Two of the photos of landforms are mostly abstract while the third could be recognized as looking into a stream bed under clear, flowing water... 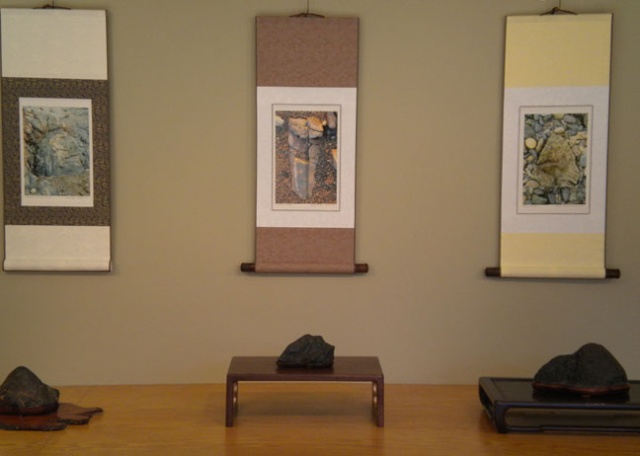 Many thanks for taking your time, to share your knowlegde

, very interesting.....
I can understand natural rootwood is only exhibited together with stones...

The old root from before 278 BC, is very touching in its innocence, I saw the picture before.

The art Kagedo offers, is breathtaking

, I wish, I am able to learn a thing, or two....Jittacarvers could be inspired here.

I would like to see the 3 scrollpaintings up close, they look very nice....But I find them much to strong for the stones.
If you asked me, would I have placed the scrolls for them self, on a wall with a distance to stones, and not together with.

Chris,
Thank you for posting the pics of the show and congratulations to Glenn, you, and the Potomac Viewing Stone Group for a great show. Awesome!
Best,
Todd 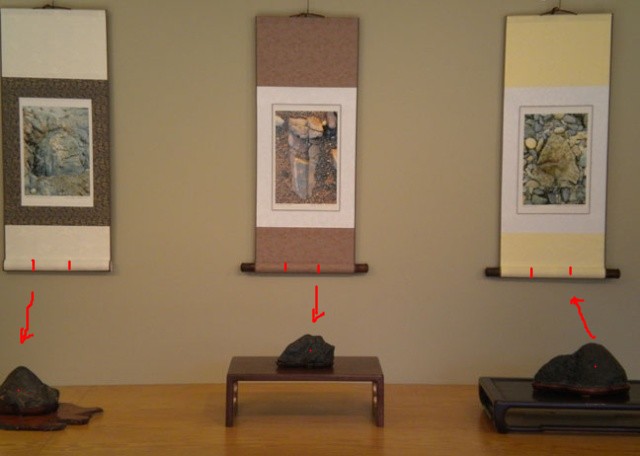