We are having a good time in Japan the ASPAC 2011 in Takamatsu.
There was a mini reunion of IBC'ers - including Min Lo, Budi Sulistylo, Will Feldman, Bill Valvanis,Le Thanh Qui (Protomira), Billy Rhodes, CJ Leo, and myself.

Here are a few photos -
There were many bonsai and non-bonsai exhibits set up.
This is a sample of a large Calligraphy painting in the lobby of the convention center (about 3 meters across). The characters say Kibo or hope in English. In an exhibit room they had these large calligraphy paintings with very impressive bonsai in front of them. No photos were allowed but they reminded me of the photos of Walter Pall tree's in front of modern art. This was a very modern and impressive way to display bonsai. I will see if I can get a photo as it was great. 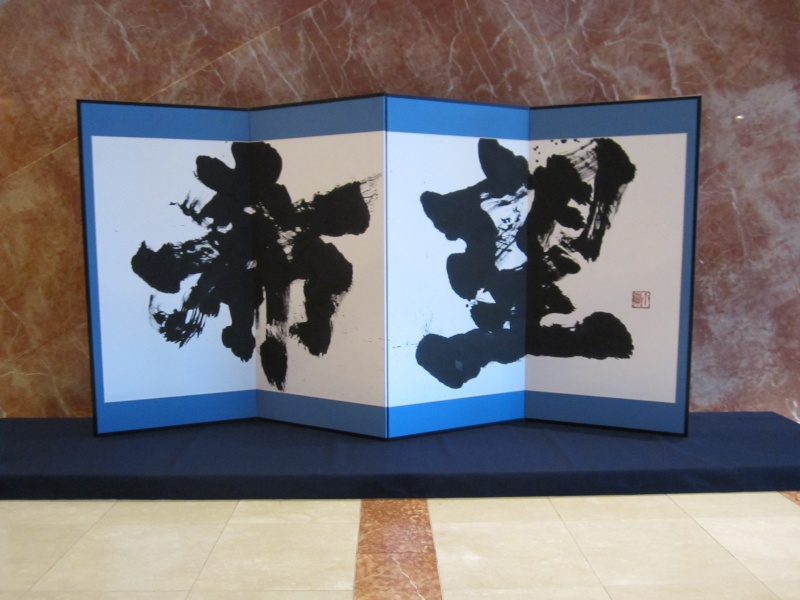 Here are some photos of the exhibit. Photos were not allowed but the security guard let me snap a couple.
An azalea owned by Doug Paul, an American, on display in Japan. 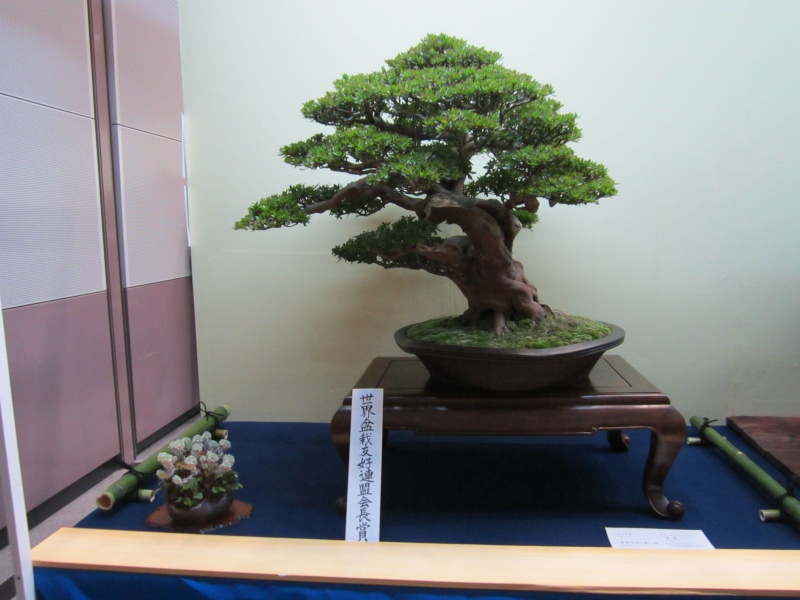 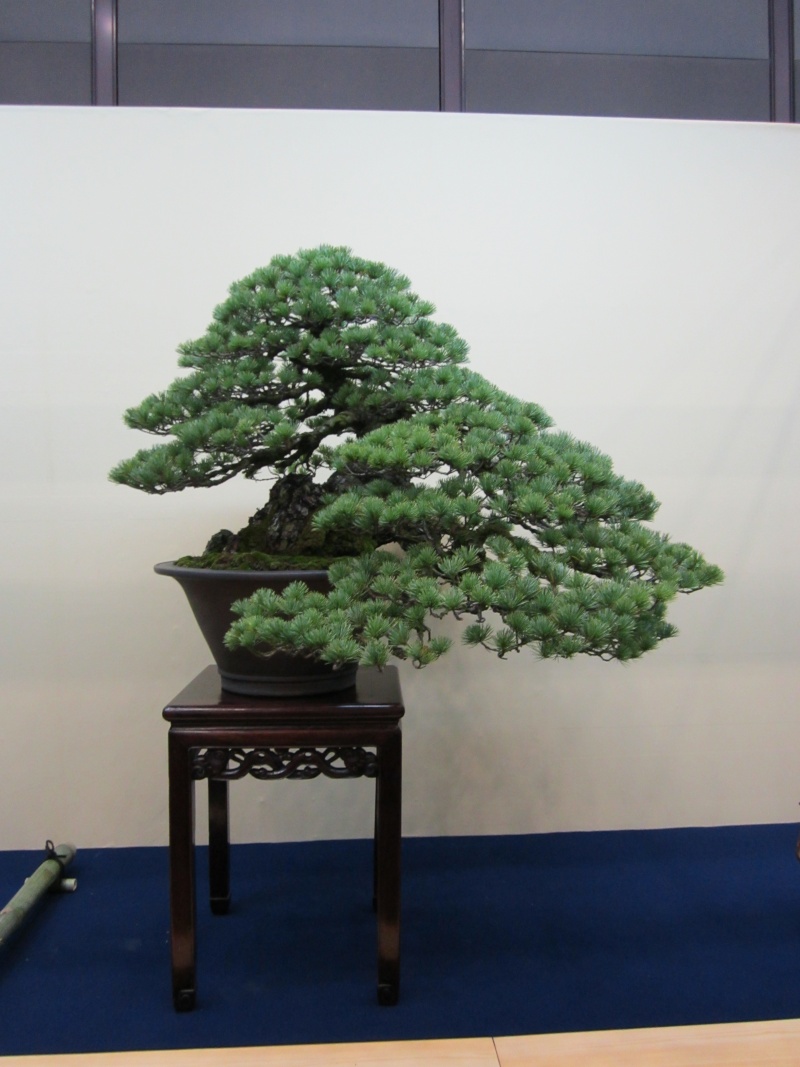 Oblique photos of the exhibit were allowed to be taken. Here are a few shots. 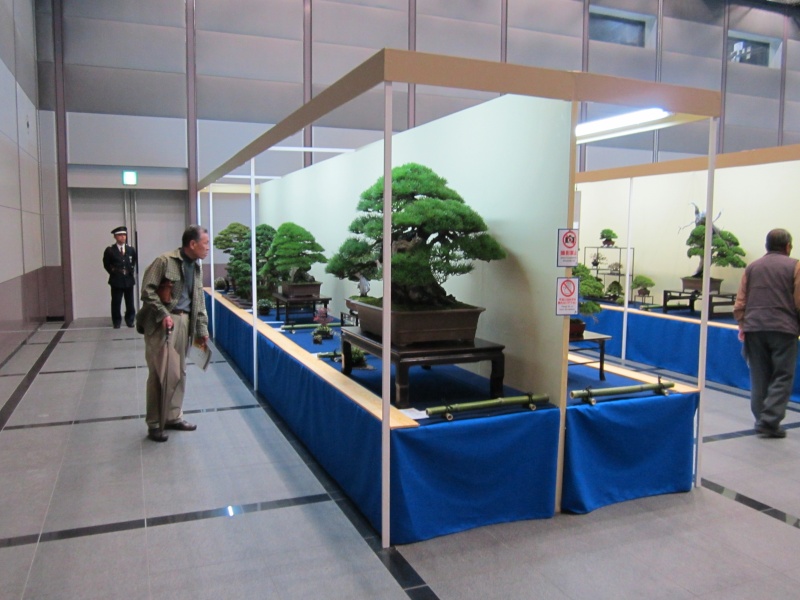 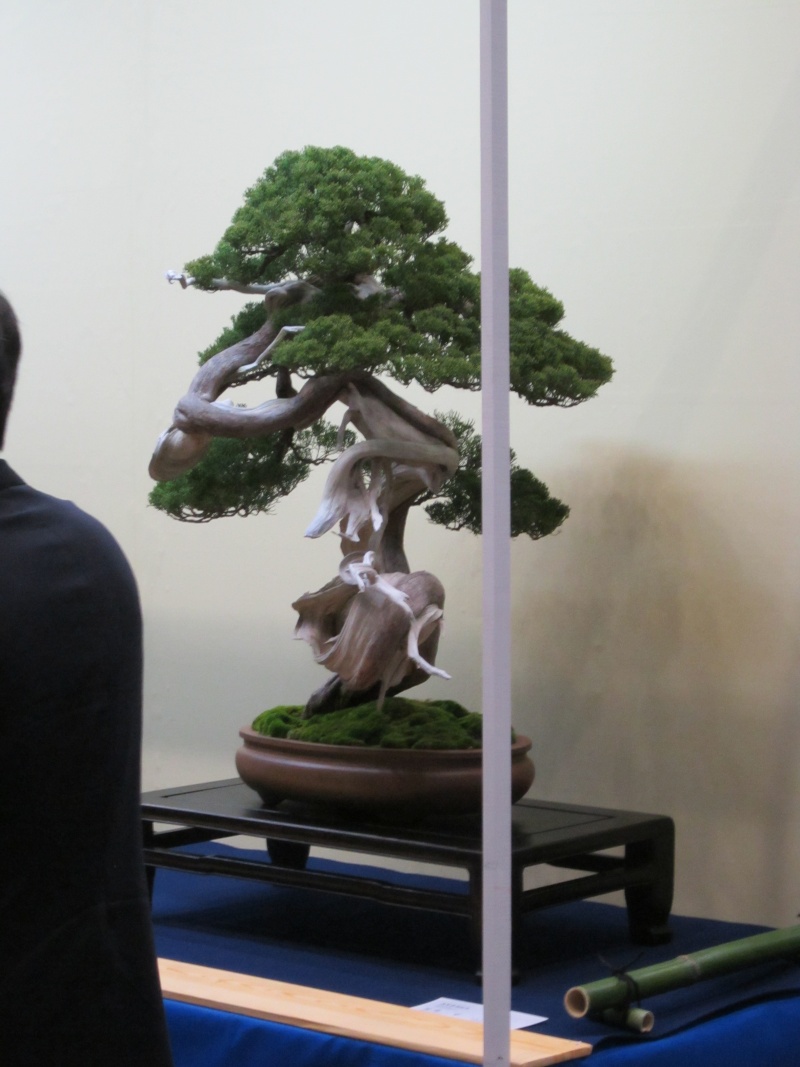 A forest of Chamaecyparis 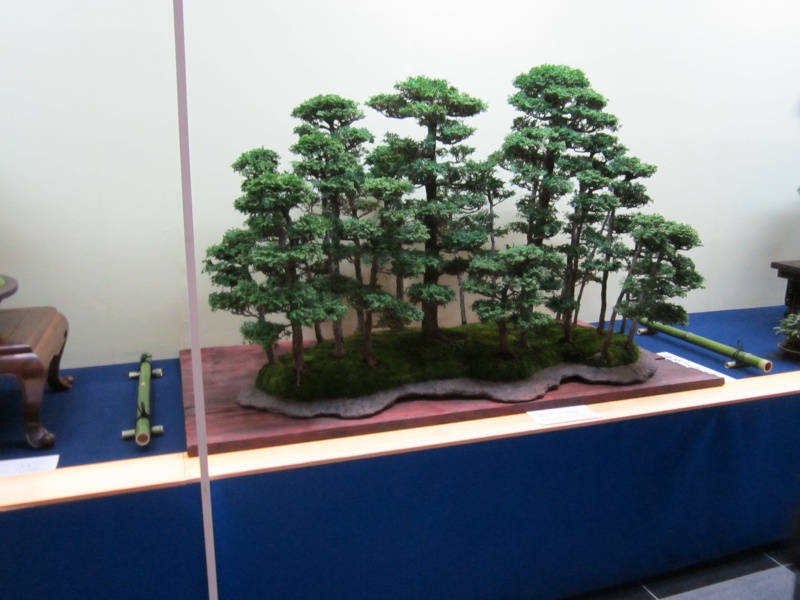 The vendor area was very delectable. Mr. Morimae had an awesome display. His material is out of this world. 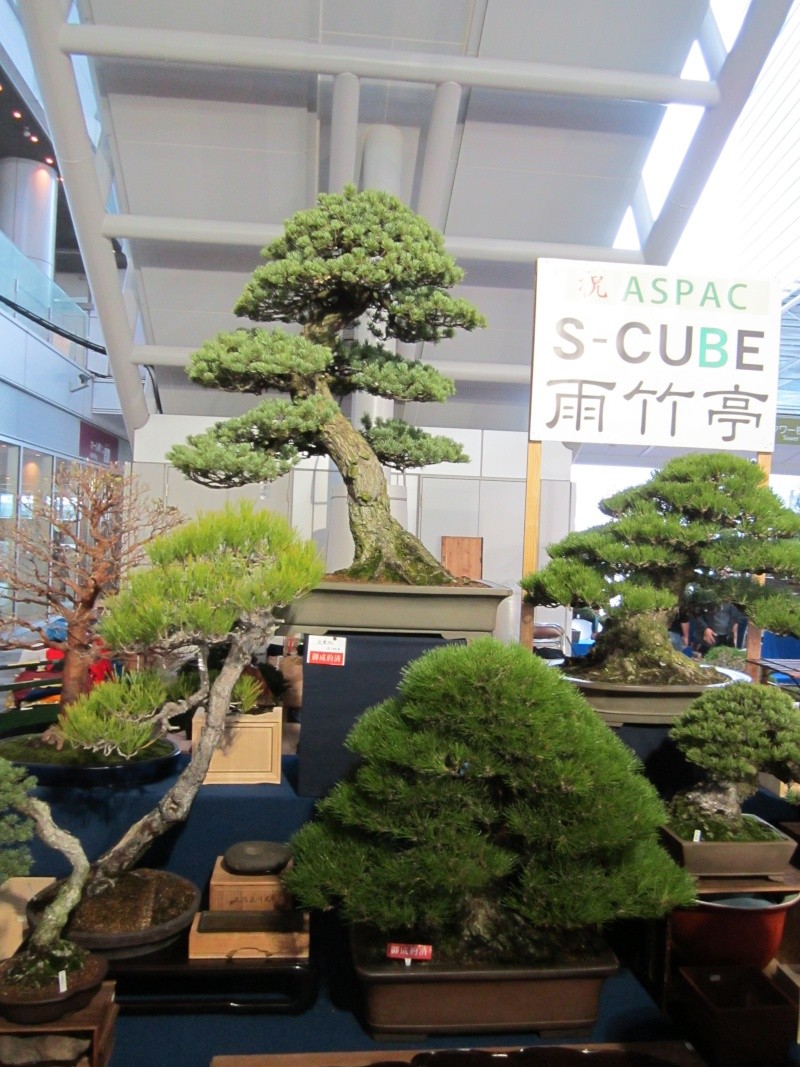 I heard from vendors that sales were slow with most of the big sales going to China. 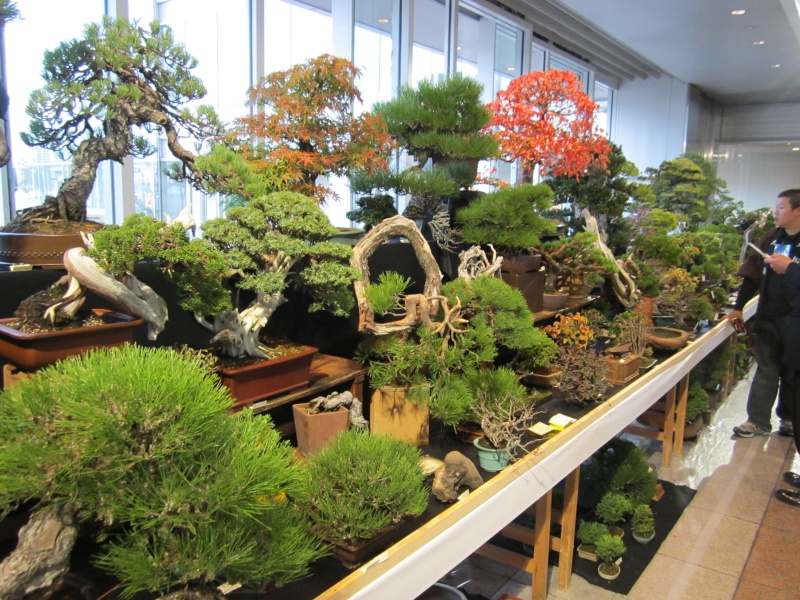 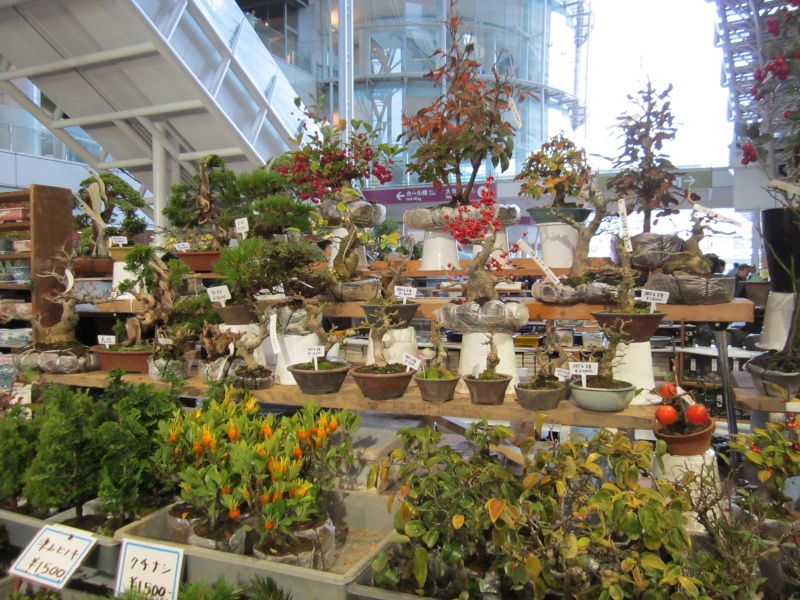 There were also demos by several big name Japanese artists.
This was the result of Mr. Masahiko Kimura's demo. A rather "small" shimpaku juniper. 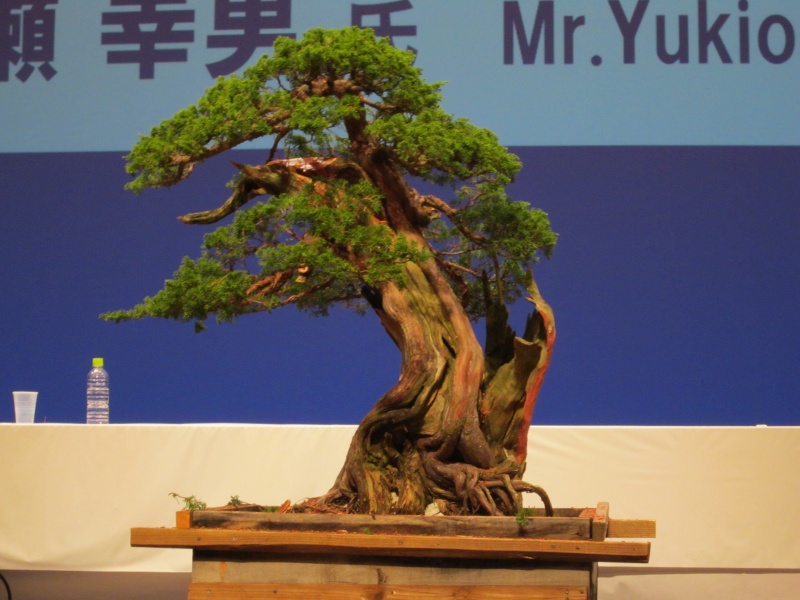 The results of Mr. Takeyama's demo of a trident maple forest. 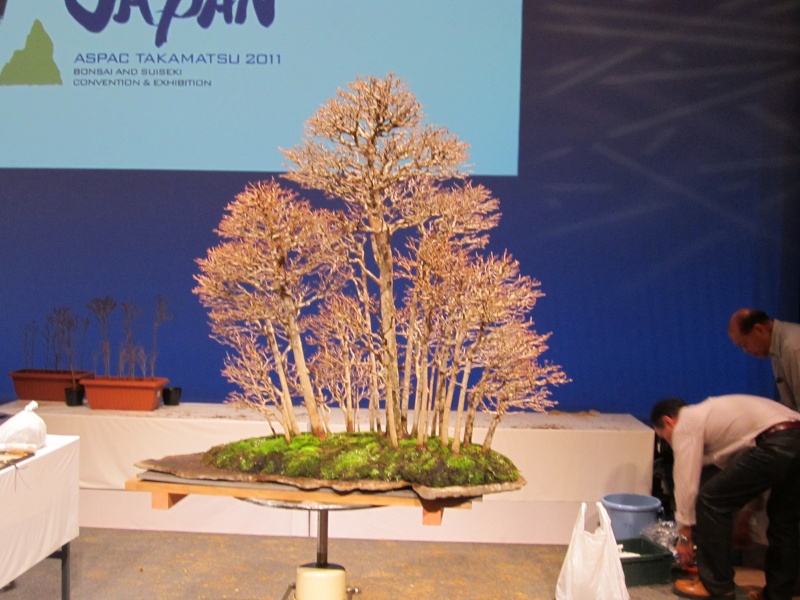 Interesting to see the photos from the exhibit...the two demos are awesome....please post many more pictures.

Morimae had a spectacular 300 year old Miyajima Japanese five-needle pine which has not been exhibited since the 1940's. Price US$1,300,000.

It has been here since Thursday and it sold this afternoon!

Sorry you missed purchasing it, but the container in front is still for sale and it's only US$493,000. 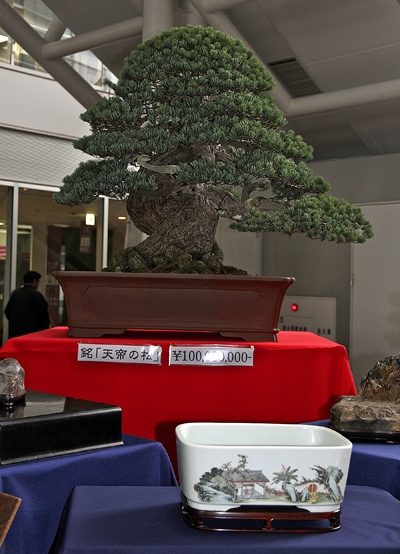 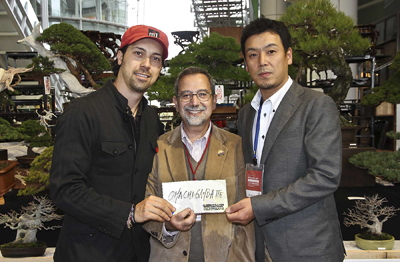 Morimae had a spectacular 300 year old Miyajima Japanese five-needle pine which has not been exhibited since the 1940's. Price US$1,300,000.

It has been here since Thursday and it sold this afternoon!

Sorry you missed purchasing it, but the container in front is still for sale and it's only US$493,000.

Do you know who bought it Bill?

Thanks for sharing - fantastic photos 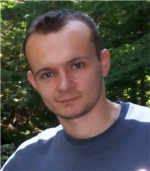 And the SIZE of some of the trees! You'd need a crane to move them.

JimLewis wrote:And the SIZE of some of the trees! You'd need a crane to move them.

Or a couple of apprentices!

Bill, do you know how old the antique pot is, from which dynasti ?

xuan le wrote: Do you know who bought it Bill?

It stayed in Japan.

...this is the second time I saw a million dollar tree here in IBC , but this one looks more believable to fetched that amount. still, I can't believe some guys would spend so much fortune for a tree.

Very nice trees by the way, thanks for sharing your trip guys!
Why the oblique pictures only Rob?

jun wrote:...this is the second time I saw a million dollar tree here in IBC , but this one looks more believable to fetched that amount. still, I can't believe some guys would spend so much fortune for a tree.

Very nice trees by the way, thanks for sharing your trip guys!
Why the oblique pictures only Rob?

Pretty much SOP at a Japanese show that photographs are not allowed. They usually publish a book and so I suppose they feel photos would hurt book sales. Also if they let people take photos if would mess up the traffic flow - there were thousands of people stopping by the exhibit. (Heck they had 50,000 people get together the week before the show to spruce up the area around town).

Today I had a chance to go to one of the other ASPAC displays at Tamamo Castle ruins (Across the street from the main exhibition). UNBELIEVABLE!!!!! Magestic bonsai trees displayed in traditional Japanese architecture rooms with tokonmas. Unfortunately they had secruity everywhere and no photographs were allowed. There were even 2 trees from the Japanese Imperial Garden on display.

I follow this tread with great interest....I wish I was there.

Please send photos from the galladinners, and the menucards too

Here are a few photos from the special exhibit at Tamano Park featuring two Imperial Bonsai, Kokfu-ten winning bonsai and a few from the original Matsudaira Shohin Bonsai Collection. Also from the bonsai exhibit and suiseki exhibit from the convention. 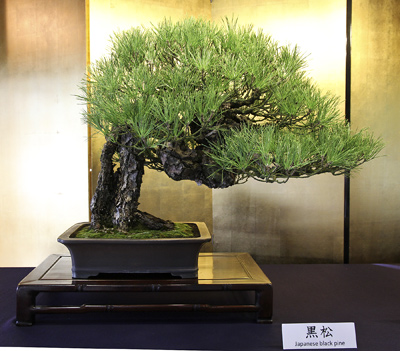 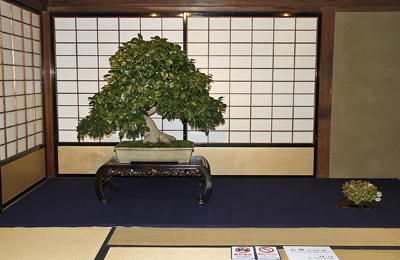 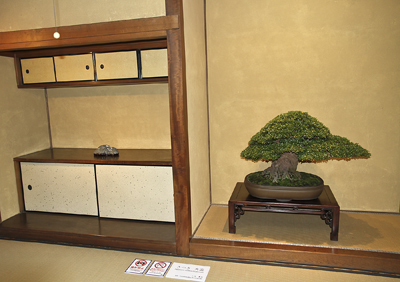 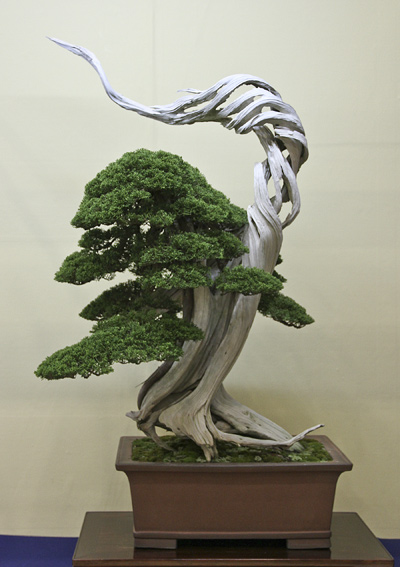 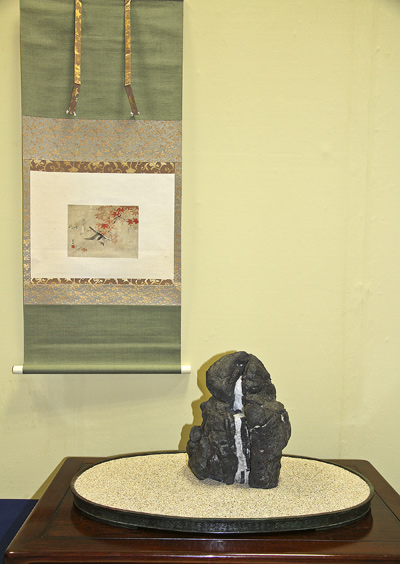 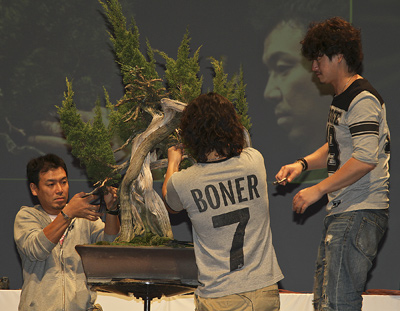 Demonstration by Omachi and Iura with back towards viewers, assisted by Sakurai... 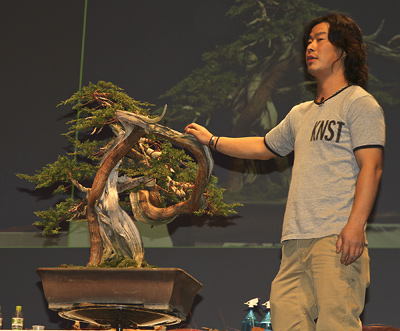 Finished demo tree. Iura's T shirt reads better from the front than from the back!

Rob and Bill, thanks for posting.

Rob, the large shimpaku you posted belongs to and was trained by Mr. Takeo Kawabe. He has a book out now called "The Bonsai Crafstman". While in Japan, get a copy. You will really like it. On another note, Mr. Kawabe was an apprentice of Kimura Masahiko for over eleven years.

Bill, so there were a few Count Matsudaira trees on display! Good. Do you still have you Matsudaira maple?

Thanks for the report.

Could you ask that guy where he got his "boner" T-shirt? I'll bet the "7" is an over-statement. God I miss "Engrish".

Russel, I believe he bought it here...

A few hours ago there was a special "Night Auction" at the convention. Many famous bonsai dealers and artists quickly bid on the 50 or so items. Everyone carefully examined the bonsai, containers, tables and suiseki prior to the auction. Then, halfway through the auctions suddenly more suiseki appeared which we did not notice earlier. We looked over to the side and they were quickly unpacking more suiseki, probably because they were about the only thing foreigners could afford. Items went from about US100 to US$37,000.

It was very interesting because as the item went up for auction two very large screens, one on each side of the ballroom displayed an image of the item next to a chart of the current bid in Japanese yen, US dollars and Chinese Yuan. They used the official exchange rate at the end of the day at 5pm. It was kind of dangerous because they accepted charge cards. Several times were successfully bid by Americans. I did not see many Chinese, but then there are always others bidding for big time spenders or had dealers bid on items. 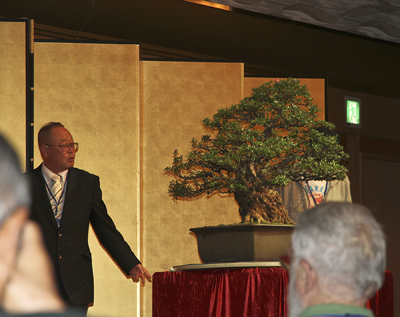 Large size Osakazuki satsuki azalea, 200 years old, collected from old temple or shrine. This was one of the demo trees and was very large. 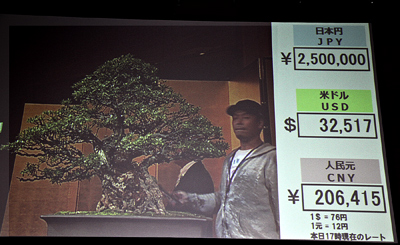 Score board, items went quite quickly because mostly professional bonsai dealers were bidding, plus a few foreigners which slowed down the process as well as verbal bidding announcing current pricing in yen, dollars and yuan. Isao Omachi on the right helped move the items, but needed help, three others to move this size bonsai.

Yes, I'm still have one of the original Matsudaira shohin bonsai, 26 years now. Count Matsudaira is responsible for starting and promoting shohin bonsai in the early 1930's. Originally I was acting as a "curator" trying to keep the Japanese maple in the same general shape, size and spirit of Count Matsudaira. However about ten years ago I noticed other bonsai from the Matsudaira Bonsai Collection displayed in Japan were being "updated" and changed. There are only a certain number of years one can maintain a bonsai (any size, any species) at a certain size, especially deciduous and broadleaf species. So I decided to act as an "artist" rather than a "curator" for the Japanese maple bonsai.

Attached is an image of the Matsudaira Japanese maple bonsai taken in spring 2011. Please note the upper branch which is being used to inarch a new branch. Actually many inarch branches have been added. Very old bonsai do not readily produce adventitious new shoots, so new beaches must be grafted. 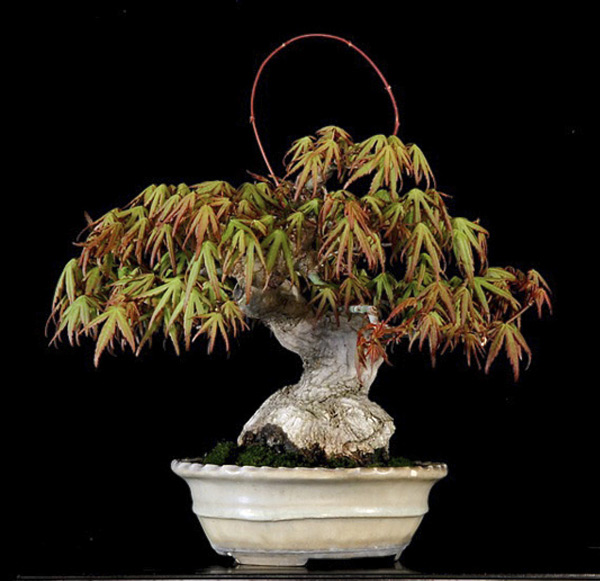