One of the bonsai nurseries we do not hear much about is Seikou-en in Omiya. It is a traditional high end bonsai nursery, or was because time changes there too. Tomio Yamada is slowly handing the original bonsai nursery to his daughter Kaori Yamada, who with succes is launching a mixture of Ikebana and bonsai, named Saika. No pictures of this trend, but I was allowed due to earlier connections with Tomio Yamada, to exclusively shoot some photos at the bonsai area of the garden. This is very limited and it is extraordinary to be allowed to show pictures from this place.

Maybe little known in the west, but Seikou-en and Tomio Yamada is in the top in Japan.
The reasons why Seikou-en and others do not let you shoot, is to protect the customers who have trusted their bonsai to the nursery. Famous bonsai may be in a developing stage, maybe placed here to recover form a disease cached another place. There is many reasons for the nurseries not to risk a tree been publicised anywhere without permission from the owner. Therefore sometimes very strict limits regarding photos.

Here the pictures I was kindly permitted to bring forward.

Tomio Yamada, running the bonsai studio at Seikou-en in Omiya.

Special stone bonsai creation by Tomio Yamada. I have seen this this bonsai also 12 years ago at my first visit here.

You are overwhelming us today !! I've spent the better part of the day looking at you wonderful photographs. A great and inspirational way to start a weekend of bonsai work. Thank you so much for sharing.

Was this area spared from the tsunami?

Omiya is north-north west of Tokyo and probably 120 from the Pacific coast (maybe 60 miles from Tokyo Bay). They felt the shake of the earthquake but were nowhere near the Tsunami effects. As Morten experienced, earthquakes happen every day in Japan. Tsunamis are rarer but that's why we use a Japanese word for them.

Just fantastic. Pl send more pics I know you have more to show us; like the country side views etc.

Thanks for sharing.
Cosmos 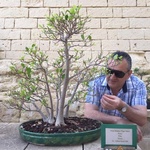 Wow Morten, I have been through all of these but had to wait until I had a quiet moment to really take some time to go through them again. Thanks a lot for posting all your travels, really enjoyed all the photos.