I am sharing this tree, because I feel this was a gift from the Bonsai GODS. In time it will be an awesome specimen. I have been training it for the past two years. Let me know your critique. 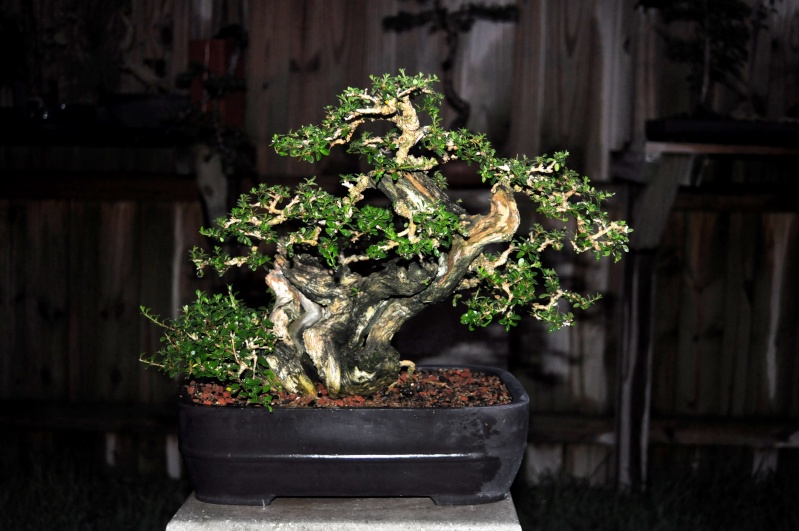 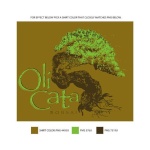 Great trunk - with a fast growing species like this Clerodendrum, should see something really nice shortly.

At first glance my reaction is- Somebody got a Phempis acidula in Florida? It has the same trunk characteristic of a matured Phempis...very nice tree.

I wish y'all would tell us about this plant. The only Clerodendrums I know are big leafed ornamentals, and some are horrible stinky weeds.

Hiram, it's beautiful. Tell us more about it.

that is a beautiful piece of material. with a start like this, you can't miss.

Russell Coker wrote:I wish y'all would tell us about this plant. The only Clerodendrums I know are big leafed ornamentals, and some are horrible stinky weeds.

Hiram, it's beautiful. Tell us more about it.

This tree originally came from Puerto Rico. It was collected by Mr. Luis Garrido and myself in the costline of the town of Manatí. It has two (2) mayor trunk chops, one near the left side of the base and one in the top. Hiram has done a good job styling this tree!!!

Clerodendron aculeatum is in the Verbenaceae family, which includes Premna and Lantana. In Indonesia it is known as Pacar Laut, which means ocean fiancé and it shares the same habitat as Sancang/Wahong (premna). I guess that its rugged bark and similarities to premna make it premna's ocean lover, hence the name. (On another note, it is common for Indonesians to do this with plants. For example, Santigi (Pemphis acidula) is considered the female version for of another tree Santigi lanang (Lumnitzera racemosa) In Taiwan, this tree is know as Ku Lan Pan, a name that references its indigo colored flower stamens. Ahh. like Russel mentions, the leaves have a distinct smell when crushed. Premna also has this smell, as well as lantana.

This tree grows along most of the shorelines of Puerto Rico. It is a vine-like shrub that sometimes grows as an underbrush species in coastal xerophytes. Because of its underbrush nature, most of the trees are a bit straight, without interesting movement. This particular tree came from a rocky outcrop that is severely beaten by the wind and salt spray. Several specimens were collected that day. Only two (2), including Hiram's tree were outstanding. The other one is in my collection. Also, trunks like this are an exception to the rule. Ninety five percent (95%) of them look like bamboo shoots/sugar cane. In recent years, hundreds of Caribbean clerodendrons have been imported to Florida, most of them being a 'barked up version' of Nia buxifolia;straigh with no taper!!!!!

As far as dead wood elements go, natural jin and shari are quite hard and durable. Man made shari, on the other hand, rots easily, even with frequent applications of lime sulphur.

According to my limited knowledge, there are two (2) species of clerodendron that are worthy bonsai subjects: 1) Clerodendron Aculeatum (Puerto Rico & Virgin Islands) ; and, 2) Clerodendron inerme (Southeast Asia)

Both species have the same natural habitat: Coastal Lime Stone. Most of them occur as vines. The Asian version has an elongated leaf with a red petiole. Both species have identical flowers, bark and growth habit. The Caribbean species has better leaf reduction capability. Because of this, most bonsai enthusiasts, after seeing one as bonsai, are unable to identify the species in its native habitat. In nature, the leaves are totally different!!! As a bonsai, the leaf becomes thicker, shiny and round. On unhealthy bonsai, leaves are slightly corrugated and yellow. In nature, leaves are big, a bit corrugated and yellowish.

A fast root developer, it needs frequent root pruning. Like most coastal species, nematodes are a problem. A well drained/porous medium mixed with crab/lobster/shrimp shell is in order when in a bonsai pot. Dried brine shrimp sold in a pet store as fish food will also work. Reppoting time will come when the tree's leaves become slightly curled and yellowish. (Hiram! you better repot your tree!!!!)

Being a true tropical, I believe this tree will never be able to tolerate indoor culture. It needs ALL the sun it can get. Some of the trees i've seen in Northern Florida, even when cultvated outside, display weakened leaf characteristics.

I hope this helps!!!

I have two of these and several cuttings now. What does the brine shrimp do? Fertilizer function?

Here's my little one. I have noticed these are very fast growing. The shoots grow in alternate pairs and one pair always seems to want to grow straight up.
They tolerate broken branches amazing well and will grow so fast they can heal. Perfect for the drag behind your car styling technique. 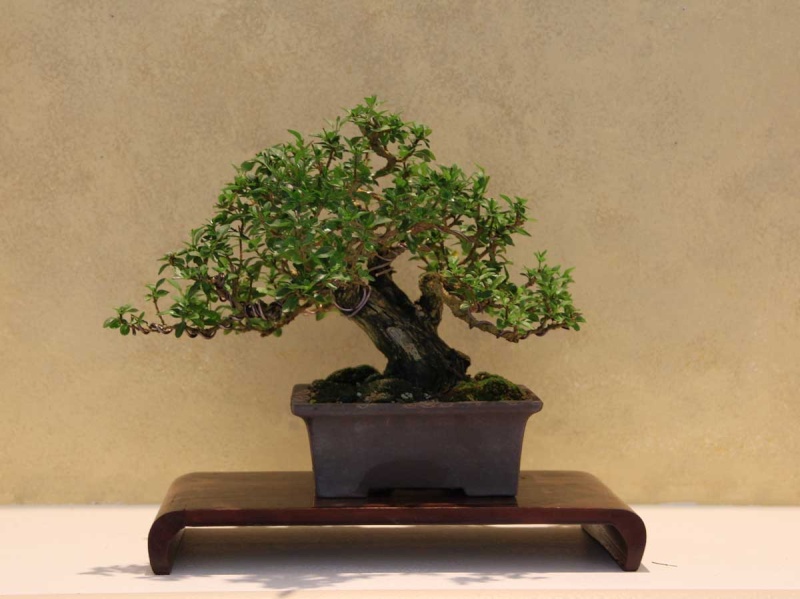 May be time for better pot for this guy.

I have two of these and several cuttings now. What does the brine shrimp do? Fertilizer function?

Here's my little one. I have noticed these are very fast growing. The shoots grow in alternate pairs and one pair always seems to want to grow straight up.
They tolerate broken branches amazing well and will grow so fast they can heal. Perfect for the drag behind your car styling technique.

May be time for better pot for this guy.

The natural organisms that breakdown the shells make no distinction between them and nematodes. Over the years, I have found that this is the best way to get rid of this pest. Very so often, when i repot my coastal species, the soil is full of worms. Worm presence evidences an optimal medium and the health of my trees show it. Th inclusion of shells in the soil medium also works for Malpighia species as nematodes are their primary enemy.

Concerning the design obstacle you are encountering, in which the shoots seem to always grow straight up, I recommend you to use a combination of Lignan and wire techniques. Once the branches reach a desired girth, prune. When the new shots come out, select one as a leader replacement, wire it into position and let it grow. As sap flow is interrupted by the periodical pruning and redirected by the repositioning of a new shoot, you can achieve the desired shape without having your work undone by the tree's sap flow. This technique is also used with ficus, a tree that looses its shape easily and that has incredible sap vigor.

Thank you Jose. I just finished re potting this weekend. Russel I think this will help.

FYI for artist who might be thinking of purchasing one for their collection. My experience has been they are one of the most humble species I have ever come across. Mine grow an inch every two days. I pinch, I do not cut. One thing to note about this species; if you neglected, it will grow out of hand. I have not encountered any pest problems (thank God). I have it black lava rock, turface and pine bark. I use a three month fertilizer. If you dare to make a shohin or a bunjin, get ready to re-pot every month or so. I have another one and I placed it a small pot and I re-potted it five time in one growing season. Like Jose mentioned the leaves will curl up and turn yellowish. I LOVE THIS SPECIES. I just got over 10 pre-bonsais. I worked one and most of all of them have movement. I got lucky. If you do not have one, try to get one as soon as possible. they are getting harder to find, especially good ones. I hope this helps everybody. If you have any questions, you can email at hiram@olicata.com. thanks for all the nice comments.

Thanks so much Jose Luis and Hiram. Very interesting material! And you're right, now I want one!

And Rob, you're right too. That little guy needs a nice pot.