I bought a little one last year, for no reason except I never had one, & someone may ask if it grows under lights.

The answer is yes, but it doesn't bloom.
You don't want a picture. It is pathetic, & in the might-as-well-kill-it-now stage.
I had it in my saikei, without a lot of supervision. The leaves grew too large for it to go with the serissas, so I took it out, pruned it (hacked actually

), and wired the trunk & 4 branches.
While it was in the saikei, all the plants around it died, despite my efforts to keep them watered. On the next tree over, the branches on that side died.

The question is: does anyone know if Wrightia has a reputation for allellopathy (what black walnut does)?
Iris

I dont think Wrightia R is an allellopathical plant. I have many Wrightia in my garden and it does not influence the growth of my other plants. Wrightia R will do well in areas with plenty of sunlights. It can also survive in shaded areas but it leaves will tend to be bigger. Wrightia loves water whether in shaded or not shaded area. Cheers 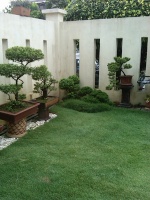 ndleong wrote:
I dont think Wrightia R is an allellopathical plant. I have many Wrightia in my garden and it does not influence the growth of my other plants.

Are the Wrightia in pots or in the ground? Are any of them potted with other plants in the same pot?
Iris

Iris
Both on pots and ground but have not tried to pot with other plant in the same pot.

In allelopathy, the tree's roots produce a toxin that poisons plants in the immediate vicinity. It would not affect a plant in another pot or planted in the ground in another part of the yard. Some plants I have found to be allelopathic are miniature rush and sedge. You can't grow them in a saikei. And I have some horseradish that keeps killing blueberry bushes, even though I put in a plastic barrier.
Iris

I have a Wrightia and a Juniper planted side by side on the ground. Both are living well.

Interesting. There is a whole study of which plants are susceptible to allelopathy. In this case, I lost a serissa, a miniature ivy, a mondo grass, & a nia that were adjacent to the Wrightia in the same pot. They could have died from other causes, so I don't know, but it looks suspicious.
The horseradish has never had any effect on surrounding weeds and grass, but I think I may have to give up growing a blueberry bush that close to it.
Iris