Thought I'd try something different with this forest planted Larch. Collected 4 years ago, it was heavily reduced 2 years ago. 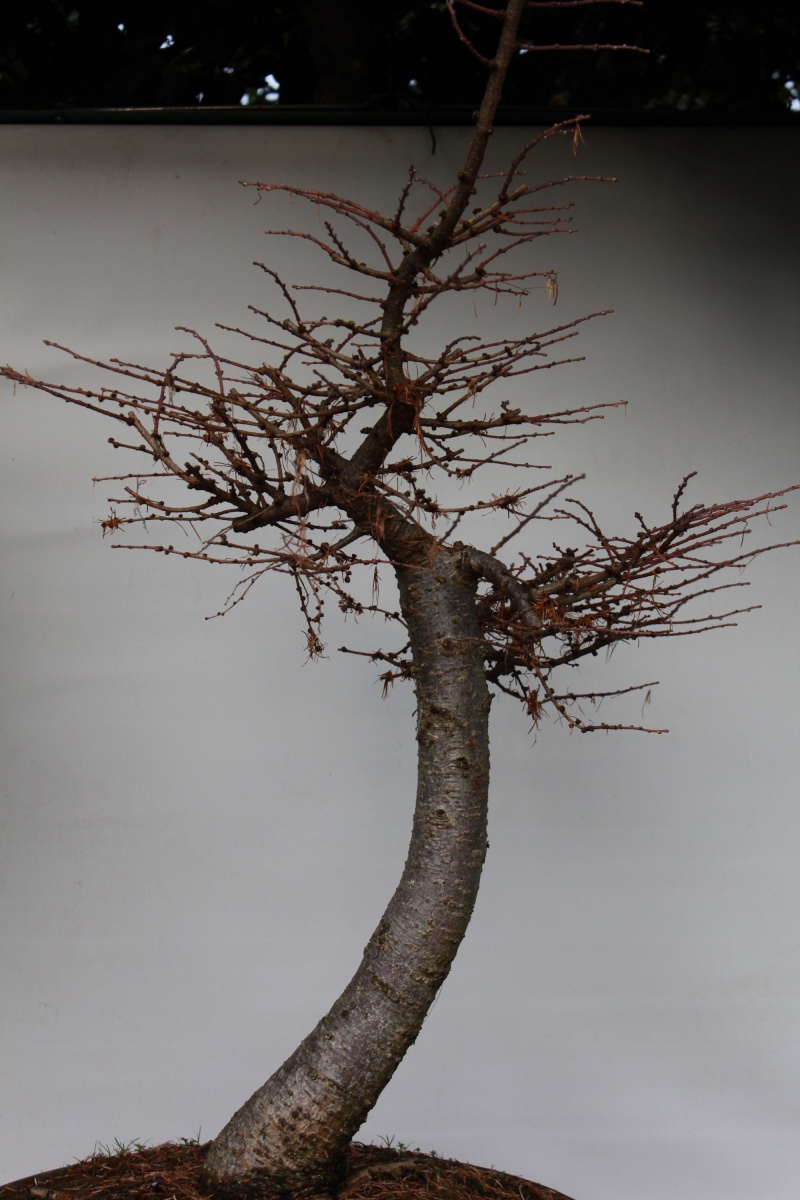 When the reduction was made, the new leader was wired upwards and the primary branches placed. 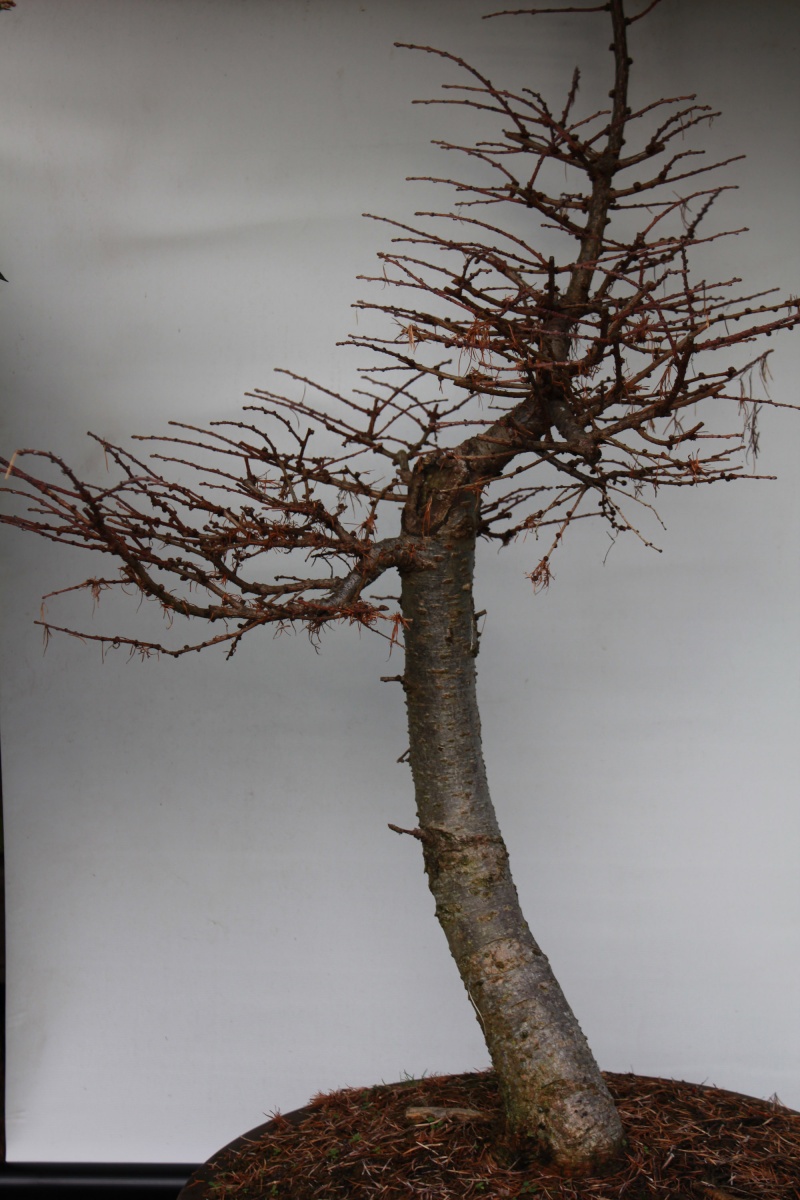 The top was allowed to grow unchecked and helped the calous to form. Larch heal very quickly. 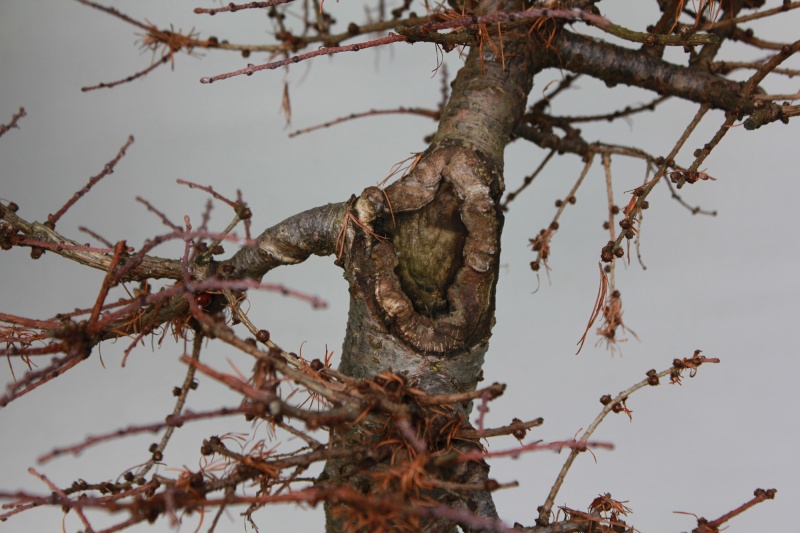 The top was reduced and the whole tree wired. Sorry for the poor pics as they were taken indoors this evening. 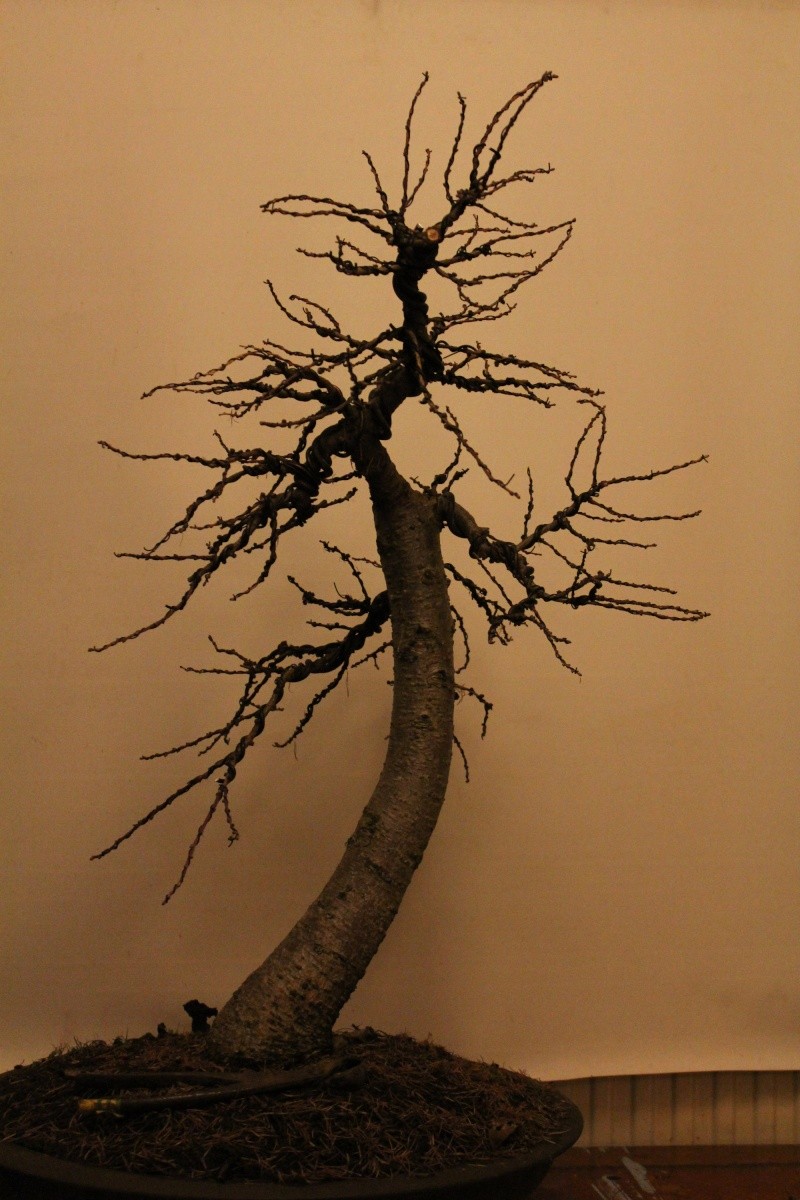 Put some pics on last night but they were pants. Here are three I took this morning. 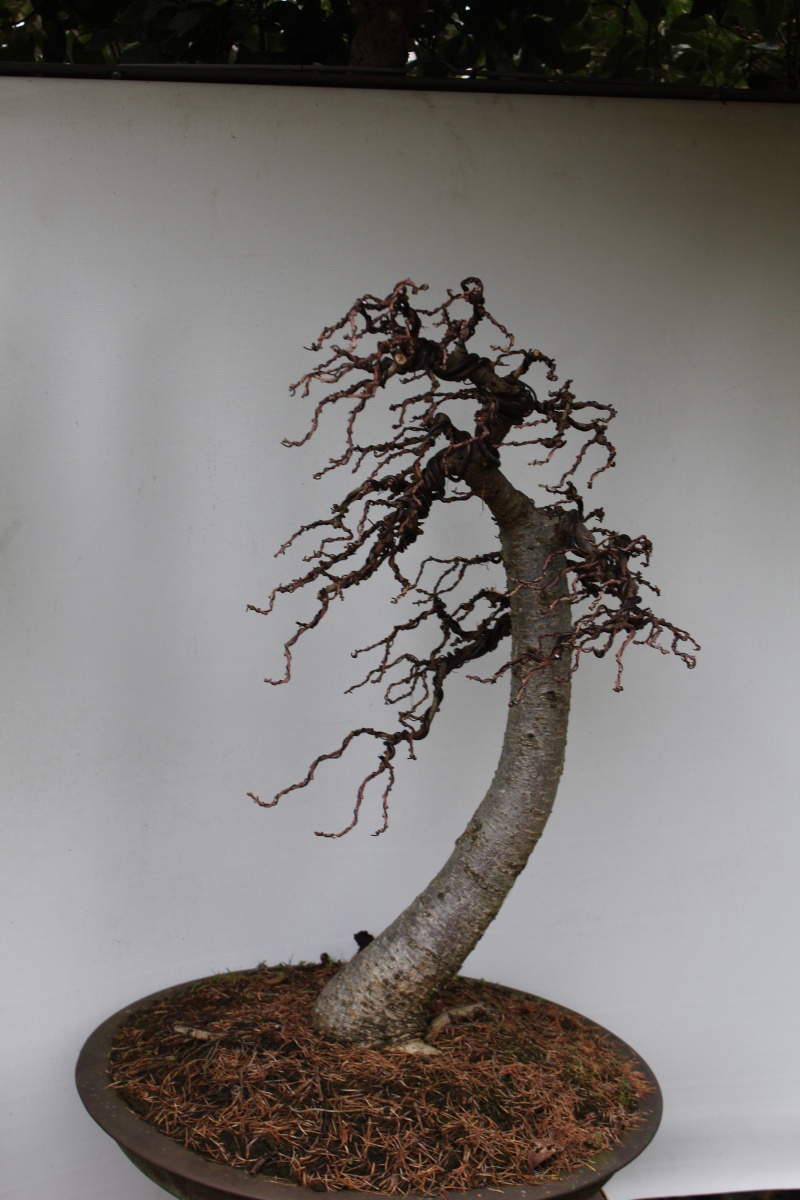 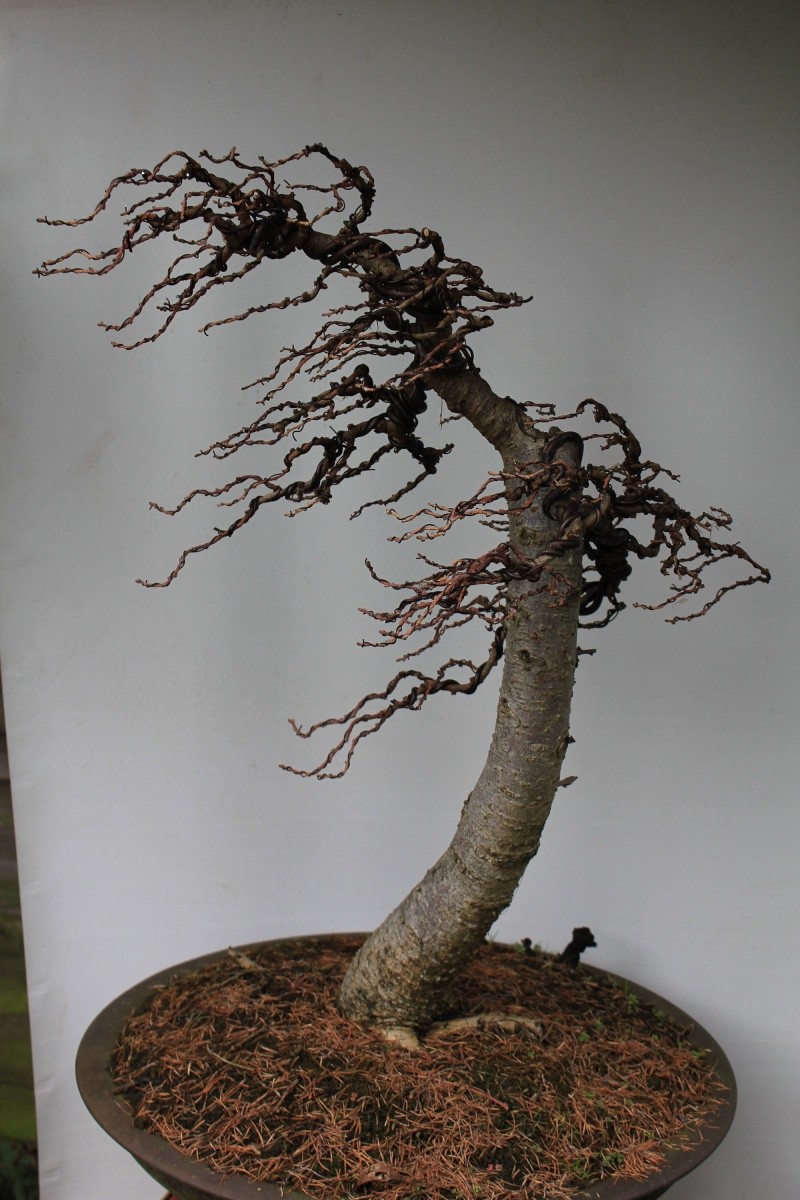 This is my prefered front. I may introduce a shari at some point, and jin some of the branches once they have matured. 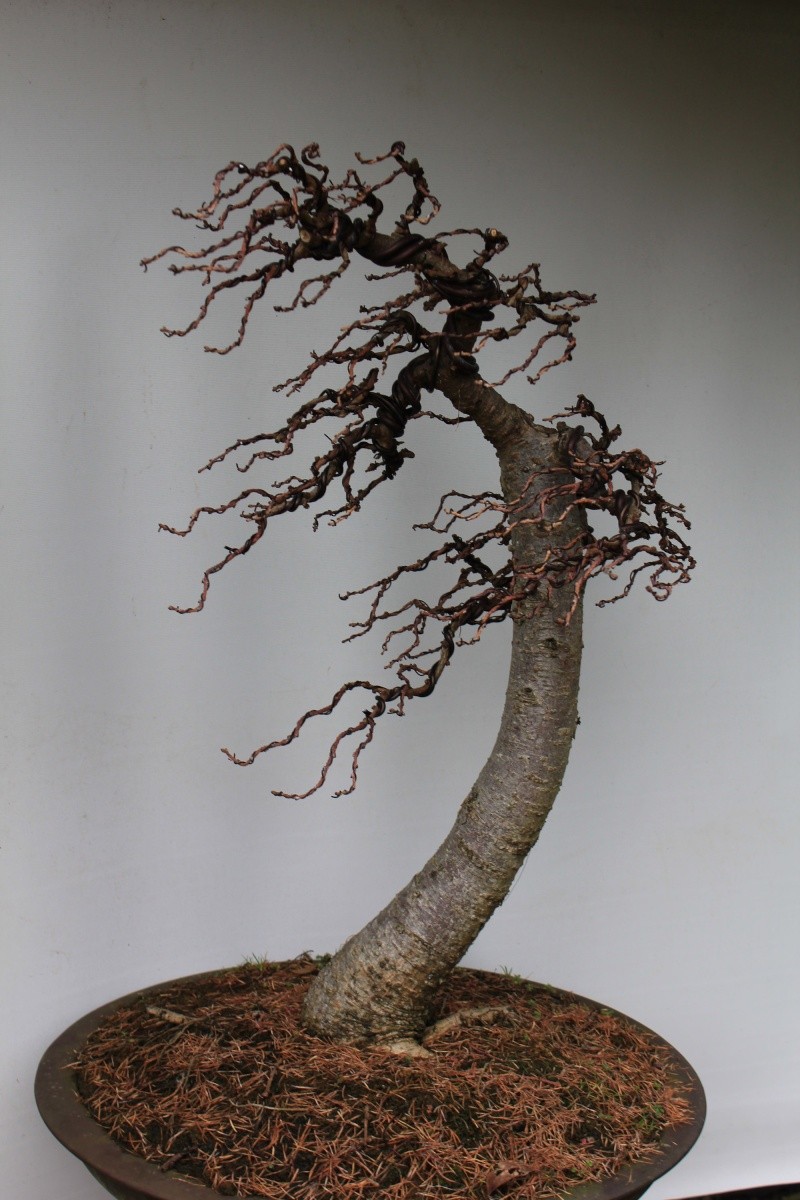 The construction of crowns for me a bit unusual. Just keeping fine branches. You'll have to remove some of the spring?

Thanks Pavel. As I said, I will introduce deadwood in the trunk and branches.

Thanks Will. Sorry, I did not read well.

No need to apologise Pavel 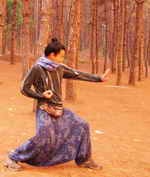 I like your efforts Will. I wonder why the wind changed directions? any thoughts...?
John

Hello John. I thought this question might come up. Personally I like to see some movement the other way as It gives a sense of balance and shows some struggle, resistance and tension against the weather. I think this has been argued before that all windswept should lean in one direction from the roots up. Just personal choice I guess. Heres one of the Chinese images that inspired this Larch. Note the tree on the right leans into the wind. More dynamic I think. 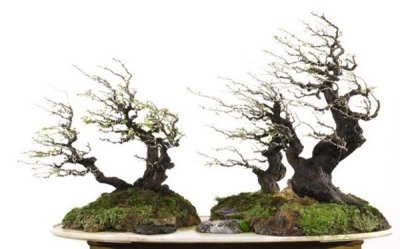 Dear Will
It looks very nice...but the tree is not pointing in the direction the wind told it to grow in the beginning.

Hello Yvonne. Thankyou for your comments. Please go back to my last post for an explanation.

You have every right to be the artist, but this chinese group planting, and your tree does not work for me.
You make very nice bonsai, and I do admire your work

Hi Will, I hope I'm not to bold, commenting on your work (I'm a big fan BTW), but this is a bit out of your normal stride, kudos for bravery and all. I do realize it's in progress and I just wanted to say that I've seen trees like this out in the woods, where one gets rooted beside a rock and grows up the side of the rock as natural forces push all the branches and foliage the other way. All sorts of deeds going on out in the wilds so who's to say it ain't so. It looks like this tree grew from the cleft of a rock or such and looks kind of undressed without the rock. Such nice branchwork on a rather plain trunk, like the trunk was more protected over time then the exposed top. Ok, how many times have I mentioned rock so far, quit beating around the bush (no pun intended), I think it needs a rock. There I've said it.

This tree has its main trunk going into the wind 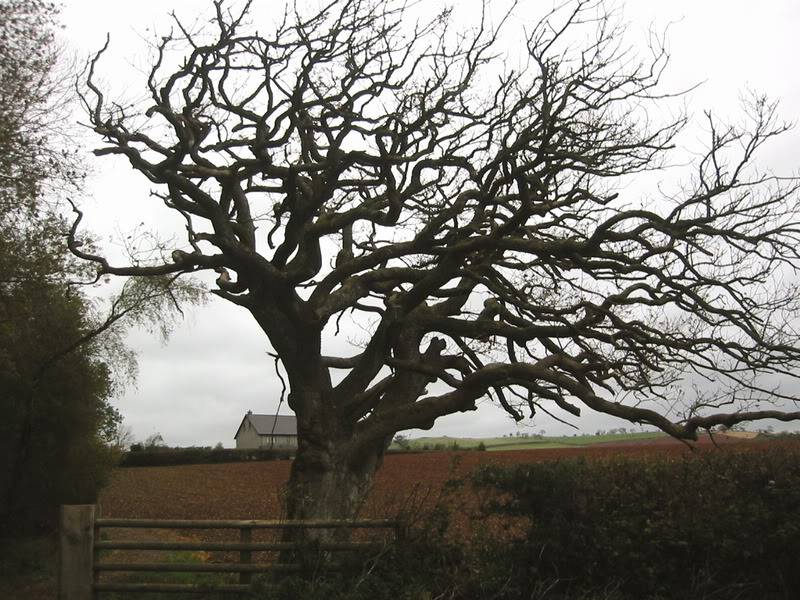 Hello RKatzin. When you say it needs a rock do you mean thrown at it?

That could be a good idea but the tree is quite tall and the rock would be very heavy. This Larch looks young in the trunk at the moment, but has started to age. It was an experiment in branch placement for windswept and I will study and hopefully resolve some issues over the coming years.

Will, I was taught as a lad that rocks are not for throwing, and like any good lad I tossed more than my share, but I certainly was not suggesting such a thing. It's a rare opportunity when an artist shows you his raw sketches and I personally appreciate it, having often asked, "How do they do that?" I'm looking forward to seeing how the tree develops. As always, I'm inspired.

Smitty, that's a gnarly old tree and an interesting study in how opposing forces can shape a tree. This tree sits in a westward wind, pushing everything to the right in the pic, while each morning the rising sun pulls the branches to the east. You can see the conflict in the double re-curved branches throughout the tree, a great display of strength and power. The other force at work here is gravity, in the form of seasonal snow load. The wind may have set the motion, but the snow cast the form, so to speak. Boy! Wouldn't you love to go through it with a pair of loppers!

I was about to ask the same question yesterday...

Yvonne Graubaek wrote: ... ...but the tree is not pointing in the direction the wind told it to grow in the beginning... ...

Then I looked at the image with my eyes half closed, trying to focus on some natural laws and I came to the same conclusion...

will baddeley wrote: ... ...It gives a sense of balance and shows some struggle, resistance and tension against the weather. ... ...

I noticed also that the two roots at the right side seem to give a firm anchor to the tree. Don't they?
All these from the view of a beginner..., with your kind permission

will baddeley wrote:Hello John. I thought this question might come up. Personally I like to see some movement the other way as It gives a sense of balance and shows some struggle, resistance and tension against the weather. I think this has been argued before that all windswept should lean in one direction from the roots up. Just personal choice I guess. Heres one of the Chinese images that inspired this Larch. Note the tree on the right leans into the wind. More dynamic I think.

Thanks for sharing your thinking on this Will. I appreciate that you have thought this through and have an artistic opinion. Personally I am a little wishy washy on the matter and I wonder if being "out of balance" might be ok and almost necessary in some respect for an effective windswept composition. As usual it comes down to a personal decision/preference about what is more important to the composition in question.
John

jgeanangel wrote:I like your efforts Will. I wonder why the wind changed directions? any thoughts...?
John

It did not change, this is what can happen to a Larch growing on a mountain side or on the top of a mountain that is battered by the seasonal winds, like in this picture of a larch growing in just such a place! Trees growing in a place like this can grow for a large part to one side, until they reach the hight were the seasonal winds are much stronger, than they are forced to grow to the other side 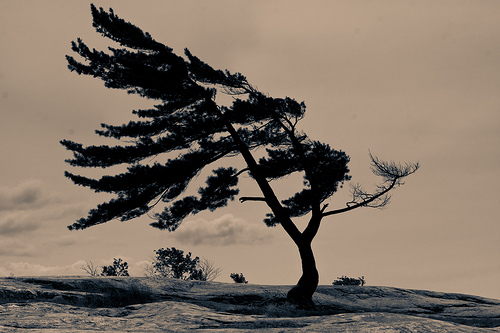