Last year my Coralbark Maple, garden tree, produced its first ever noticeable crop of seeds. Never one to pass a chance of more trees, I collected all of them, even though they were less than half the size of normal Japanese Maple seeds. They stratified in pans outdoors all winter and we had a really cold one. Today I bent down to move a pot and noticed a panful of sprouted seeds. Just finished potting up 80 of them and there are more to do.

I have no idea if they will have red bark, but there is always the chance of an even better variety than the parent. Even if none are identical, the short internodes and small leaf size, of the parent, should make them good trees for bonsai. As a last resort, I could always use them for grafting stock. 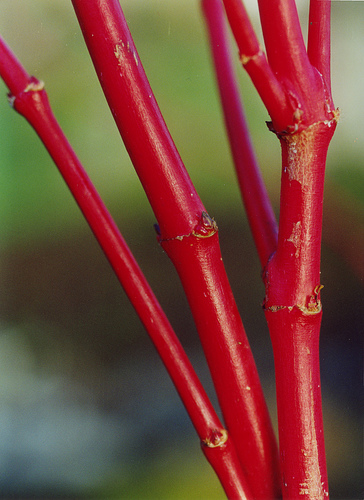 This is the lovely bark on the parent tree. 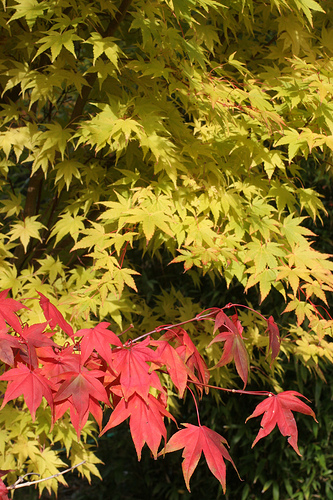 and this is its autumn colour with a branch of Osakazuki in front. 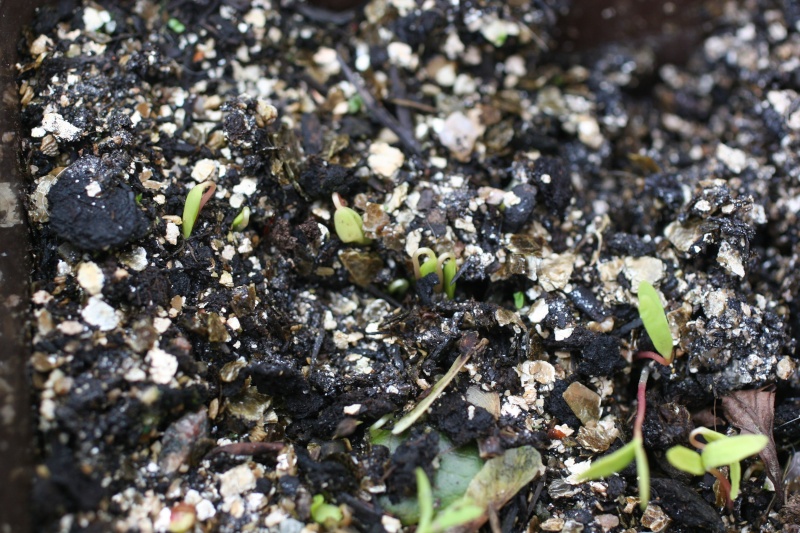 A few of the tiny seedlings.
_________________
“It is not the strongest of the species that survives, nor the most intelligent. It is the one that is the most adaptable to change.” - Charles Darwin.

Re : Sango Kaku or Senkaki seedlings

80 seedlings with more to do !!
Nice one Kev.
Once you have them past the damping off stage if offering any out for sale..I'd take a dozen off your hands. 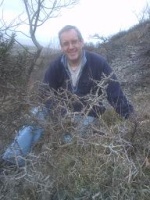 Good job there Kev, I remember seeing them all hanging on said tree end of last summer.
They are all likely to have less colouration than the parent tree, if any at all. But like you say there may be the odd surprise and with the quantity you have there is a better chance of a gem appearing!
I have a senkaki as a medium sized bonsai that was given to me as a rooted cutting from Mike K of Plantasia back in the day, you may remember it. It has very little colour, only a hint of the true coral colour in winter on the newest twigs. Although i did get a belting little grafted one for last years birthday. Going to grow it on for garden.
Catch you soon
Regards Nick

Today I "discovered" another potfull. This time Acer palmatum atropurpureum seedlings. Potted up 50 and have run out of pots for now. Probably more than 50 left to do.
_________________
“It is not the strongest of the species that survives, nor the most intelligent. It is the one that is the most adaptable to change.” - Charles Darwin.

I wish I had the space to take on similar woes

Nice one Kev!
During the winter while walking around the local garden centre I spotted a beautiful Japanese maple for sale covered in seeds, and being the shy retiring type I promptly walked up to one of the staff and asked if I could take some with a bribe of a box of roses chocolates and a kiss on the cheek no less!

Well They’re beginning to sprout but a pesky bug has killed a couple by nipping at the base of the stem.

I must remember to go back and identify the mother tree by name though.

Crap! Just been out for a late evening check on the greenhouse and was astonished to spot 40 of the Sango Kaku seedlings, that I'd kept protected in the greenhouse, had each been neatly decapitated, probably by a rodent. Ah well, the others on benches outside may have fared better. I'll check them in the morning.

My seedlings have suffered the same fate. Have lost 2 potfuls to vermin. 1 Spindle and the other Hunza Apricots.

Really annoying isn't it Will. Even more so when you've gone to all the trouble of pricking them out individually. Hunza Apricots? Looked trhem up and they appear interesting in a few ways. Are you growing them for bonsai or a fruit experiment?

THe trap caught one field mouse between last night and this morning, so I hope that's it sorted. I'll leave it in situ for a few more days though, to be sure.

On closer inspection in daylight, there are a few that still have the tiny first leaves atop the seedling stem. It appears to have preferred the seed leaves. I wonder how the defoliated seedlings will do? A new technique, Hah!
_________________
“It is not the strongest of the species that survives, nor the most intelligent. It is the one that is the most adaptable to change.” - Charles Darwin.

During the late 70's and early 80's, my mum decided to try and wean me off sweets by switching to a more healthy option. Licorice root and Hunza apricots were the answer, the later being delicious. I think they are one of the more legitimate and non addictive exports from Afghanistan. Quite small and hard, but very tasty and without the copious quantities of sulphur you get with other dried fruit. Caveat emptor, re the ammount you can eat though. the phrase " eye of a needle", springs to mind. I found some last year on a market stall and after consuming the bag, decided to try and grow some of the stones. I have one seedling left.

I'm an avid Japanese Maple fan and as such I'm in the habit of collecting seedlings every spring in a few spots that I'm privy to. I haven't gone collecting this year yet, but last spring I collected about three hundred from a tree with reddish golden leaves. In that lot there were seven with pure blood red leaves, two of which perished this winter and five have leafed out this spring in glorious red leaves. I've come across others the sprouted red the first year, but reverted to green the second year. Yes, there'a point, and I'm gettin' to it. I recently picked up a large Coral Bark Maple, and in the pot with it, two lowly seedlings and I'm standing by to see if they'll be Coral Bark, or if they'll revert to good old mother, Acer p. as so many seeds from hybrid varieties have want to do. On older types I find the seed will usually produce the tree they fell from, but most new types and especially the fancier varieties, if the seed will even sprout, they generally produce plain jane Acer p., not that they're not lovely trees in evey right. So, with the Coral Bark, do the seeds produce true to type or are they one in a hundred like most others? 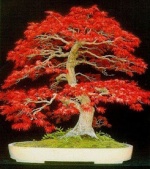 A bit late to be ordering methinks. All mine are now at four to six leaf stage. Seed merchants will sell you them but I don't think your chances of success are high now. Much better to find good sources of fresh seed this autumn to stratify yourself next winter.
_________________
“It is not the strongest of the species that survives, nor the most intelligent. It is the one that is the most adaptable to change.” - Charles Darwin.

Lately I have noticed a coral bark maple planted into the garden of the nearby supermarket...
I wonder if I could take hard wood cuttings at this time of year.
Is there any chance of success?
Any advice, please!
Thank you!

Sango Kaku has a very strong root system and issue roots easily. Trees that do this have the potential to build very good bases(nebari) Depending on your propagating experience and climate, hardwood cuttings may take a year or two to find out what will work for you. In general, start with #2 pencil size cuttings and vary the size of the rest, larger and smaller. Very small cuttings usually don't have enough stores carbohydrates(energy) to issue enough roots. Six weeks before bud break strike the cuttings with hormone (I use DIP&GROW) and keep in protected area(unheated greenhouse) bottom heat is beneficial but not critical. That will get you started, use good growing principals and hygiene.
Wood
http://thingsofwood-gary.blogspot.com/

Thank you for the response, Garry.
So, you say that I should wait for the spring to come and get the cuttings then. Do I understand you correctly?

Nellie, I'm hesitant to say spring, It's a big world

Whenever buds break in your area count backwards six weeks or as little as four weeks.
Wood
http://thingsofwood-gary.blogspot.com/

There is some one that still cheking the forum ?

There are a few people who still check and post. Best source of Japanese Maple seeds is a tree in your area that has nice leaves. There is always some variation from seed.

Marty Weiser wrote:There are a few people who still check and post. Best source of Japanese Maple seeds is a tree in your area that has nice leaves. There is always some variation from seed.

Hello Marty Weiser, thanks for replay. If possible I would look arroud for some Maple trees, but I live in Brazil and there is no Mape tree arroud here. That's why I'm looking for seeds outside the country. I'm realy intresting on those sango kaku variety.

I have ordered seed from Sheffield's Seed and been happy with what I got. Not sure if they ship to Brazil. Here is their page for Japanese maple that lists quite a few cultivars, but neither one you listed - https://sheffields.com/seeds-search/s_genus/acer/s_species/palmatum/characteristics_sum_type/1

Marty Weiser wrote:I have ordered seed from Sheffield's Seed and been happy with what I got. Not sure if they ship to Brazil. Here is their page for Japanese maple that lists quite a few cultivars, but neither one you listed - https://sheffields.com/seeds-search/s_genus/acer/s_species/palmatum/characteristics_sum_type/1

Hi Marty,
I have been looking on the Sheffield's website already, but is good to have your feedback about their product.

Did you ever heard about FW Schumacher ? I have been looking on their website too.

I have not dealt with FW Schumacher.

Marty Weiser wrote:I have not dealt with FW Schumacher.

Have your feedback about Sheffield's is enough. Thanks.