Recently a friend and I exchanged notes regarding suiseki in general and suiseki display in particular.
I would like to quote from my letter:

"The point I would like to raise is that who owns, who teaches the “authentic” tradition?

My experience in studying Japanese culture and admittedly limited experience in living in Japan leads me to the opinion that there is no single “authentic” way to display suiseki. Furthermore, all so called formal teachings related to suiseki display are what I classify as “invented traditions,” established and recorded over the last century or so. Any claims to reach further back in Japanese traditional culture is spurious and was done to enhance one’s credentials; all teachings by trying to associate with the distant past attempt to increase credibility. It is always impressive to associate an opinion with the past and give it a gloss of antiquity.
Japan modernized during the Meiji period, 1868-1912, and for all practical purposes reinvented itself. Part of the reinvention was related to arts and crafts; many were originally discarded and declared old fashioned, and seemingly everything Western was adopted and embraced. Soon the initial infatuation with the Occident receded and a new movement started to preserve traditional Japanese art and cultural values. In many cases the new movement had to modify even reinvent the old traditional ways to make it more acceptable to a newly educated, urban and sophisticated population that compared Japanese and Western aesthetics and used scientific standards.
Based on my research, it is my strongly held opinion that what we call “classical (or traditional) bonsai” is a late 19th century invention. Reading Yuji Yoshimura’s articles on the subject, you will find that he shares that opinion. To draw a parallel, I also argue that what we call “traditional suiseki aesthetics and display presentation” are also date back to this era of “invented traditions.”
To summarize my view on the subject, my position is that there is no single “authentic” suiseki tradition. There are many schools, if you will, and one can argue that they are all valid. One may even go further and say that any formal suiseki aesthetics and formal display that is imbued with the spirit of Japanese cultural values is “valid” and should be accepted and encouraged."

Are you familiar with the collection and books of Willie Benz? 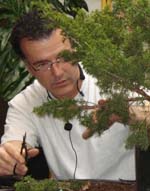 I am familiar with Mr. Benz's books, as a matter of fact I have most of the with his dedication and autograph, and acquanted with him.
I do not agree with his views on several points, however, I do admire his efforts and collection. My aesthetics are different from his.

Are you aware that your name "Peter" is Greek for "A small stone?"

Anyhow, are there other "standards" for suiseki and the display of that are different or more acceptable that that put forth by the Japanese and chronicled so well by Willie Benz? These "standards" work well, in my opinion, because of the inherent aesthetic principles they embrace.

As far as I know Peter is a Greek word meaning stone. I was not aware of the small part. I am also over 6' tall, so its OK. :-)
Our discussion concerned suiseki which is in my mind refer to Japanese stone aesthetics.
There are several differing approaches in China and in the Chinese diaspora. Plus Korea, Indonesia, etc.
If you have access to it, see my article that I coauthored with Alan Walker in the premier issue of the Chinese publication "Global Bonsai and Stone Collection" titled "Contemporary Stone Appreciation."
It is bilingual, English and Chinese and addresses the different cultural and geographical approaches to stone collecting.

I will look for the article, thanks Peter.

Peter,
With any human endeavor, there will be many different views as is the case in Suiseki, Japanese Suiseki and even within schools of thought. While we may find common views on somethings on others we may not. These tastes and understandings are never static. Your assertion that Suiseki or Bonsai traditions were " inventions" hastily cobbled together recently rather evolving over time is in my opinion a reinvention of history. I would not suggest that you embrace my taste and please do not insist I must embrace yours, or as someone once said "you row your boat and I will row mine".
The tone and the cavallier way your "history" is presented as well as the venue chosen is that of a pop cynic rather than a serious scholar.

Mark wrote:Peter,
W... I would not suggest that you embrace my taste and please do not insist I must embrace yours, or as someone once said "you row your boat and I will row mine".
The tone and the cavallier way your "history" is presented as well as the venue chosen is that of a pop cynic rather than a serious scholar.

I'm not a stone scholar by any means, but this statement suggests to me that you didn't fully read Mr. Aradi's post.
"...To summarize my view on the subject, my position is that there is no single “authentic” suiseki tradition. There are many schools, if you will, and one can argue that they are all valid..."
_________________
"Eschew obfuscation"

Perhaps you may want to re-read what I said.
My first sentence is an agreement with the one idea that you mention. The next explains that while I agree with one idea I do NOT see eye to eye with the rest of his statements. While I fully expect that everyone has their own views and tastes I do not expect or demand that the other person declare mine or anyone elses than their own as "valid". I reserve the right to decide for myself what is "valid" rather than be told by Peter that I must accept them.

I believe that stone display is an art form with its' own inherent creative evolution. There's no reason understanding suiseki history or tradition, as seen through a different perspective, should invalidate our choices.

Some traditional "schools of thought" declare that only stones from Japanese rivers may be called SUISEKI. Thus if your stone is from Wales or California it is not suiseki .....nor, if this is "true", can tradition influence its' display.

History is a written chronicle of events or people seen through the perspective of the historian. Is it fair to judge someone a "pop cynic" rather than a serious scholar because he presented a brief synopsis of his published study to our "venue"? I've read and reread what Peter wrote and did not find an insistence on his part that we "embrace" his views, rather he gave us the option to accept what we deemed "valid".

Norma,
It is deeply troubling and disappointing to me that someone in Peter's position would use the invented term "invented traditions" to explain the evolution and refinement of Suiseki in Japan. Although he claims to champion the idea that there is no one authentic Suiseki tradition, the thrust of his post is appears to be that there is NO authentic tradition. As a recognized authority I feel those arguments call for more than a quick nod to "my research". To drop this in the middle of your friendly post where there appeared to be no relate seems inappropriate. I think my response was probably too, but I felt it had to be addressed. I apologize for my part.

The term "invented tradition" is often used in history and other social sciences.
Eric Hobsbawm coined the term. His original work is titled "The Invention of Tradition" and he coedited the volume with Terence Ranger.
First published in 1983 by the Cambridge University Press.

If anyone intrested on organizing or "inventing?" the Japan Bonsai Assocation, please see my article “Gems of Bonsai and Suiseki at the 1964 Tokyo Olympic Games”, International Bonsai, Spring, 2003, (Volume 25, number 1, pages 18-21).

"In a now classic book containing a theoretical introduction by Eric Hobsbawm and a selection of case-studies, six historians and anthropologists argued that traditions which appear or claim to be ancient can be quite recent in origin and were sometimes literally invented in a single event or over a short time period (Hobsbawm and Ranger 1983)."

- The Invention of Tradition ( https://tspace.library.utoronto.ca/citd/holtorf/6.3.html )

A few interesting words regarding the term " invented traditions"...

"Now that Terrance Ranger has departed this life, I increasingly find it appropriate to delete the very words " invented tradition" from my vocabulary"

"Tradition, we must surely accept, evolves and develops rather than being frozen in the mists of time"

"The roots of tradition are more important than the changes made"

Within the Hobsbawm and Rangers definition, connections to a past, reinvented or not, is a necessary given"

I strongly reject this attempt to rewrite the history of Suiseki. I would urge anyone who is interested in the true history and spirit of Suiseki to read Seiji Morimae's text titled "Bonsai and Suiseki, My humble view on the heart and aesthetic sense of Bonsai and Suiseki".

First, I should suggest that this stack of messages related to history of suiseki be places as a different topic, as it barely relates to the initial issue on figure stones and I think is rather interesting, though perhaps a bit too emotional.

We should differentiate evolution/revolution in any field of knowledge/art from 'reinvention' and, more specifically, from history/tradition reinvention. Very often, reinvention implies an evolution/revolution, but its characteristic sign is the attempt to legitimate the more or less new approach by linking it to history/tradition that is not actually as depicted, instead of to an open discussion and evaluation of its own merits.

Based on facts, it is difficult to refuse that Meiji Restoration implied the opening of Japan to outern influences, after about 200 years of almost absolute isolation, even from China. After the initial boom, there surged the fear of the survival of its own culture, that pushed a movement of 'rebirth', that implied the 'recreation' of shinto and the setting of what would be considered Japanese culture.
In the particular fields of tea ceremony and viewing stones, the rejections of what was perceived as a modern Chinese influence led to consider "Japanese" what actually were older Chinese influences.
If you want to trace back how suiseki was defined and built in the very last years of XIX century, please look for into Japanese books themselves; just as a sample, look at Nyogakuan, in the section devoted to accesories (tables, pots, and so on).

I like and apply the Japanese rules and principles in making viewing stones, but I realize they are not truly anchored in a very old tradition, but in a new concept set in barely more than a century ago. And of course, there is no absolute uniformity in Japan, about what is suiseki and not, rules of display, and so on.

And I am confident that viewing stones culture will continue evolving, and maybe not only from Japan but why not from elsewhere in the world as well.

But facts are hard: suiseki was reinvented in the second half of XIX century.
Friendly regards,
Jesus