Chrysanthemums for Bonsai or Kusamono

Chrysanthemums for Bonsai or Kusamono

So the experiment began, in 2012 I picked up a few cuttings from King's Mum's. King's is the only mail order source I have found for Gnome hybrids and Cascade hybrids. They also sell Chrysanthemum (Ajania) pacificum, a very cold hardy, mum often used in Japan as kusamono, it has nice silver edged leaves and tiny yellow button flowers, and woody stems. https://www.kingsmums.com/index.php

A source of the two woody stemmed species that I know of is Lazy S Farm. http://www.lazyssfarm.com/ the woody mums are listed under perennials http://www.lazyssfarm.com/Plants/Perennials/C_files/Ce-Ci.htm#PERA022366
They have both Chrysanthemum (Ajania) pacifica and the species of which Bill Valvanis has a 50+ year old specimen of Chrysanthemum (Nipponanthemum) nipponicum, the Montauk Daisy. Both are reputable companies. They both are garden orientated businesses.
There may be others, if you know of a mail order supplier of Gnome type dwarf mums, please add their info to this thread.

My shipment of freshly rooted 4 to 6 inch cuttings arrived in May. I ordered multiples of each variety, starting out with 3 pots of each type. Turns out this is a good strategy. I often dried out hard, thus killing plants I put into small kusamono size bonsai pots. Keeping spares in conventional pots, or planting a few in the garden meant I always had a source for fresh cuttings after failure.

The experiment has only been a partial success. But I learned a lot about what not to do. Some of the things I learned:

Chrysanthemum bonsai are not for people short on time. Plant it and forget it won't work. They need pruning or training (wiring or tying) every 2 weeks. They are ideal for a new grower who is impatient to do something. If you want to let a JBP grow out a season, start a bunch of mums, you won't have time to over-work the pine. Dale Cochoy mentions the frequent work requirement in his article, linked above.

Definitely make a few extra cuttings, and plant them around the yard, or in pots. You will need "spares" if a planned planting goes south.

They use a lot of water for their size. Dehydration will set in rapidly. They come back quick if you catch them wilting, but there is a point of no return. With their water demand in mind, a potting media that retains water is a better choice than typical mineral bonsai mixes. Potting soil will work, especially since there is usually a need to repot them at least once a year, often more than once a year.

Fertilizer - too much of a good thing will result in long internodes and large leaves. Frequent but dilute fertilizer is good.

Wintering mums, I'm in zone 5, cold enough that even the hardiest of these mums will loose their above ground woody stems, they will come back from the roots (stolons) but you loose the best part. Keep woody specimens above freezing in winter. Most hybrids are fine on a cool windowsill for the winter. Mine go into the orchid light garden, with 18 hour day length, which encourages them to revert to their spring vegetative growth pattern. The woody stems may survive freezing into the middle 20's, but I don't know their limit. In the ground, as garden plants most are hardy through zone 6, and a few are hardy in zone 5 and 4. C. pacificum in the garden is hardy to zone 4 if the soil is well drained and on the dry side during the winter. But in the garden, most woody stems are lost over winter, spring growth is from the ground (stolons).

Pruning, once flowers are done in late November, cut them back hard, bring them indoors for the winter. When growth resumes, prune them often, let grow out 6+ nodes, then prune back to one or two nodes, this can be as often as every 2 weeks. Put them outdoors as soon as freeze danger has past. Keep up pruning and shaping until about August 1 to August 15. Then stop pruning. Let new stems extend, they need several nodes of growth to initiate flower buds as day length shortens. If you prune after Aug 15, there will be no flowers on that stem.

Wiring, and shaping - young stems are flexible, and if you keep the wire loose, they can be wired and bent. But they become brittle quickly. Stems over 6 weeks old are more likely to break than bend. Traditional training is clip and grow, and tie the flexible stems to wire frames. The cascades are shaped by tying loosely to frames. A tall vertical stem, as in my image of Rose Maiko or Kurume, is bent down and tied to the wire frame that will support it as it cascades. Branches that sprout on the cascading stem are trimmed short until sometime in August, then allowed to develop flower buds. In my images of "Hatsume" you can see 4 year old woody stems. They do not appear to back bud on old wood, except if you preserve a node, and then as this node continues to back bud, it forms a knot or knob. The wood is extremely brittle, and will snap easily. So shape the stems of new cuttings very early in the process or you will be stuck with "ugly". The weight of foliage can pull or tear a stem off the trunk, that is the reason for the green tie in the 'Hatsume' image, it is holding a branch on that is only attached by a thin strip of stem. I do have new cuttings growing of this one. Will try to do better with the next one.

As the autumnal equinox approaches, flower buds will form. The flower buds can withstand several degrees of frost. Light frosts are no problem. Protect them from 28 F (-2 C) or colder freezes. Full sun is best for flower color development. They grow well in part shade to full sun.

Most exhibition hybrids, Gnomes and Cascades included, have been bred to meet Japan's milder climate and exhibition schedules. They generally bloom late October and into November, which in my area is well after killing freezes. In the southern tier of states this is no problem, up north, the inside-outside dance will have to be performed. The later in the year you stop pruning, the later the blooming will be. If you want very late blooms, move your last pruning date to September. But I have not explored this, yet, so I don't know how late you can go and still get flowers.

So the photos below are of my mediocre, partial failures. You can see the result of my not pruning frequently enough during the growing season. The first up, Koto no Kaori is actually my "spare" as I lost the "nice one" I had in the 2014 image. The rest of the photos are more to show flowers and a little of their habit. My "best success" was with Hatsume, a nice small flowered yellow. It needs work, and the gnarled knot of wood leaves me with reverse taper. I don't think I can straighten out the 4 year old plant to look attractive. But I do have a new set of cuttings started.

My favorite Gnomes are Hatsume, Chidori, and Yukari. If you only want to try one, pick one of these 3.

This year I started sticking cuttings into mixed species kusamono plantings I have floating around the yard. They are too immature and disshevelled to be worthy of photos this year, but I hope to have worthy examples next year. I mixed mums with Salvia microphylla, bamboo, Seleginellia, hosta, blue eye grass, grasses, ferns and mosses, and they all seem to be growing together. We will see the results next year.

So I posted this mostly to encourage others to try their hand at Chrysanthemum, as I was really enjoying their flowers this week. I know my efforts have been poor at best, but I am excited about the mum's potential to make stunning displays. I hope you see the potential here, and not have their potential get lost by the images of my technical short comings with using them so far.

Koto no Kaori - a Gnome type, very upright and woody. Small flowers.
2 years from a cutting 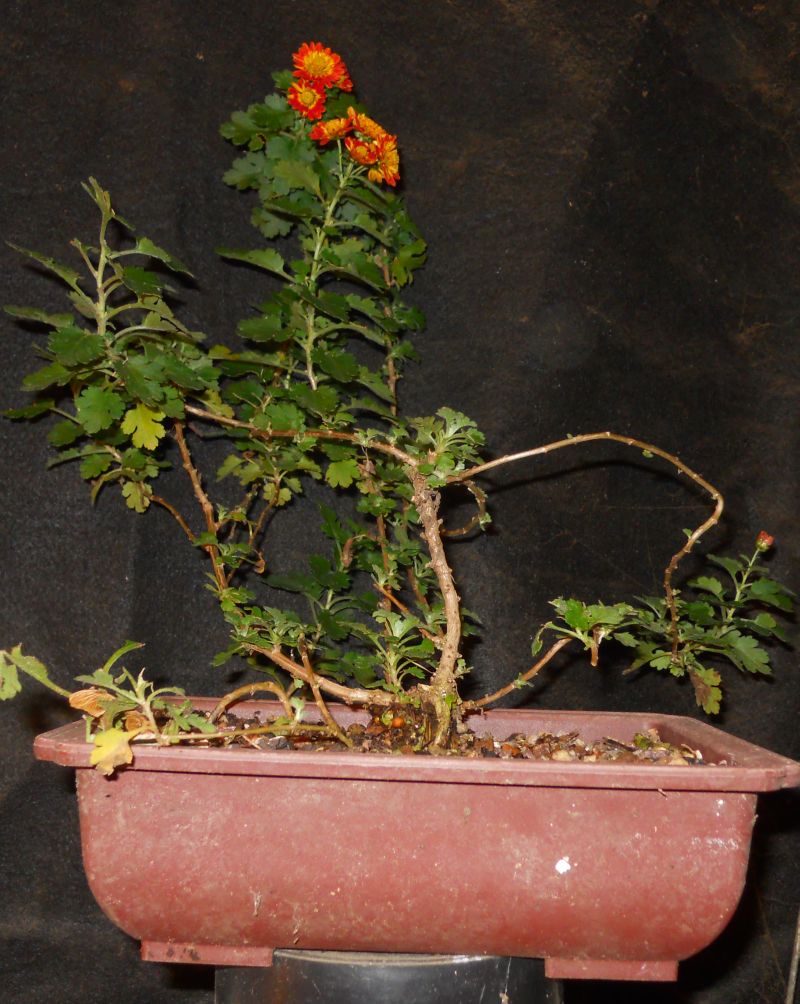 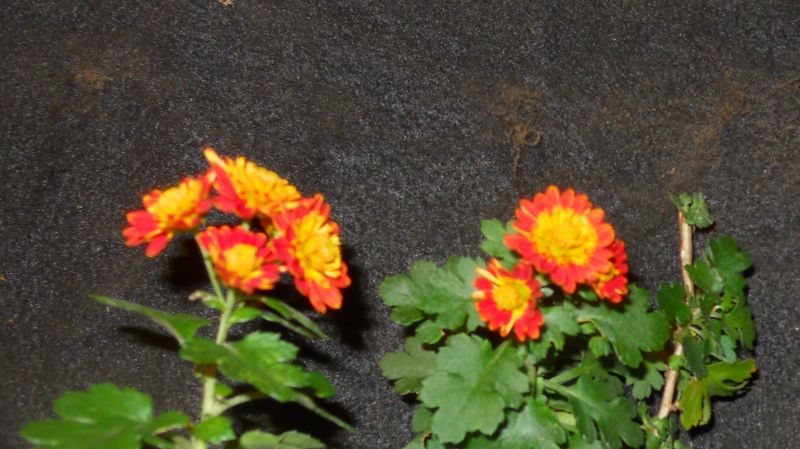 this photo is from 2014, in a 6 x 3 inch pot, since has gone to the compost heap, dried it out too hard. Death by desiccation. 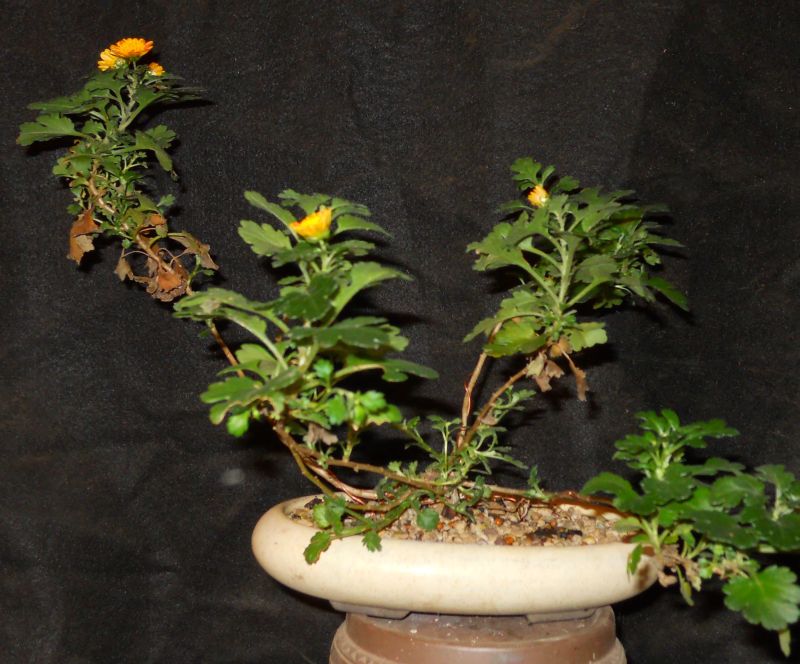 Kurume - bred for cascade styles, has woody stems, with pruning could be used similar to Gnome types
5 months from a cutting 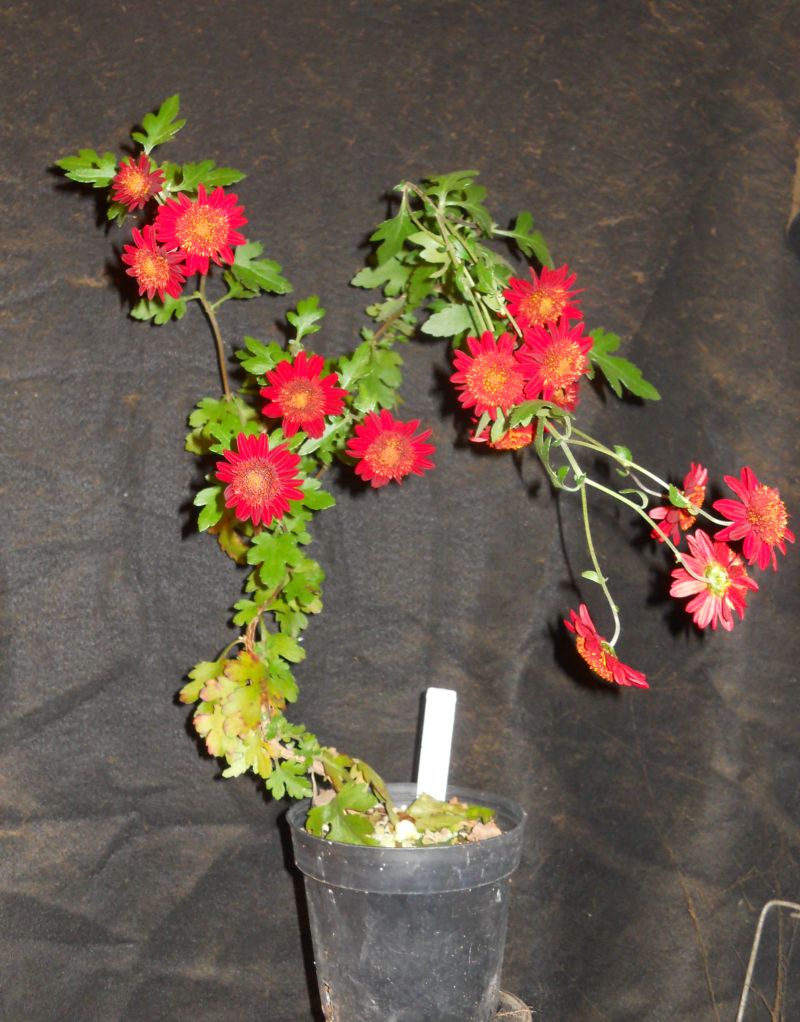 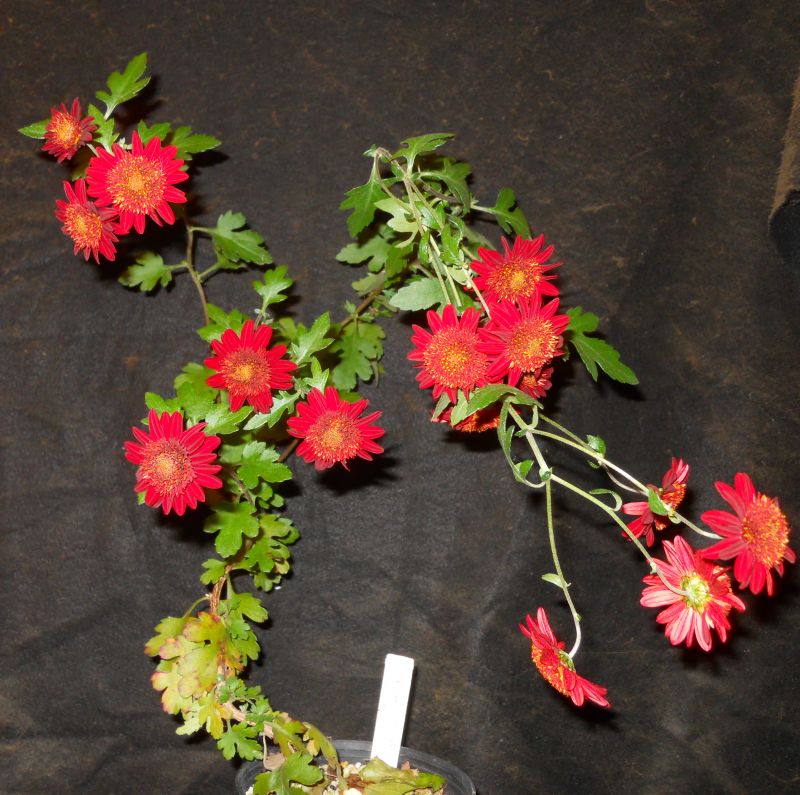 Hatsume - Gnome type that also could be used as cascade
4 years from a cutting - my favorite, along with Yukari. 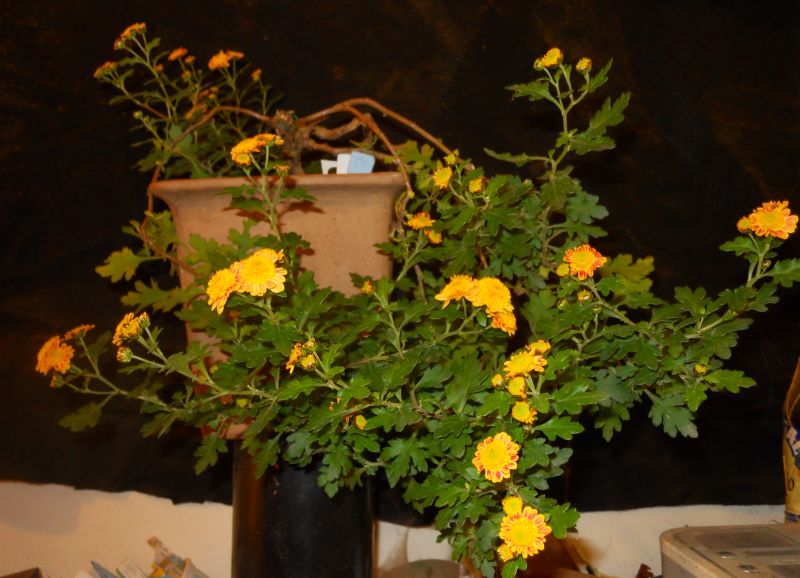 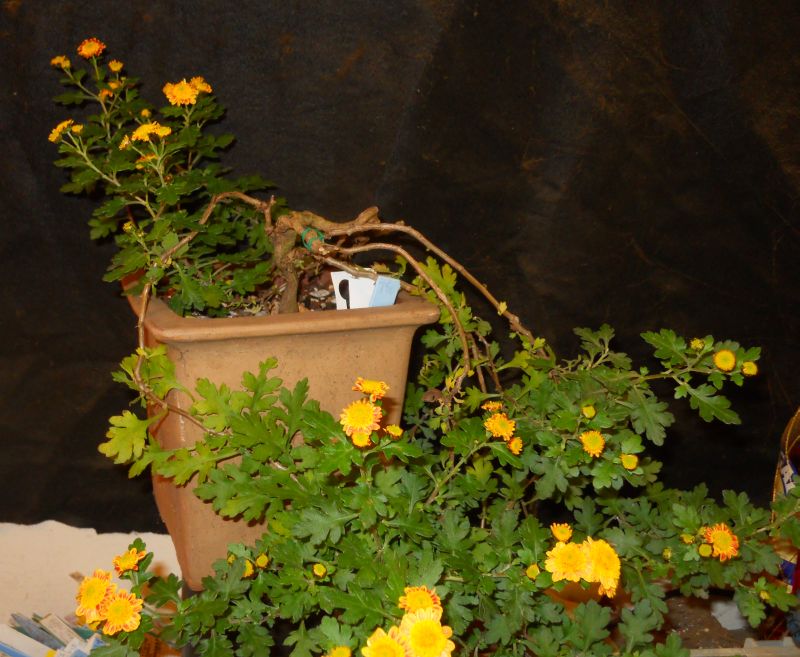 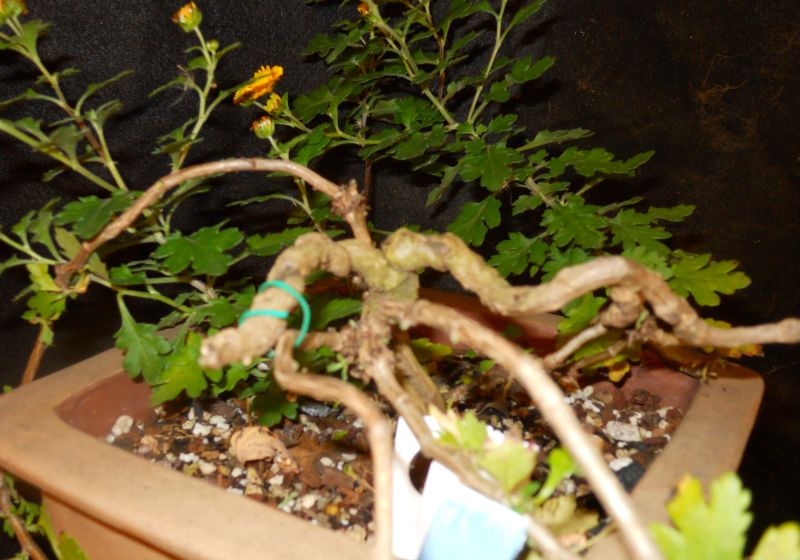 Rose Maiko - bred to be a Cascade, but it is dwarf, and rather woody. Could be used as Cascade or as a Gnome type.
5 months from a cutting 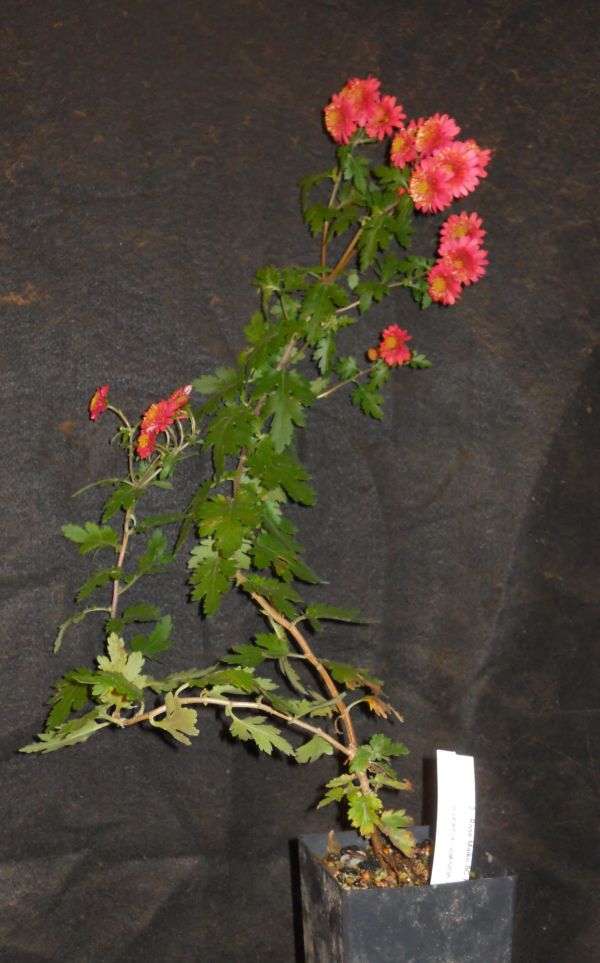 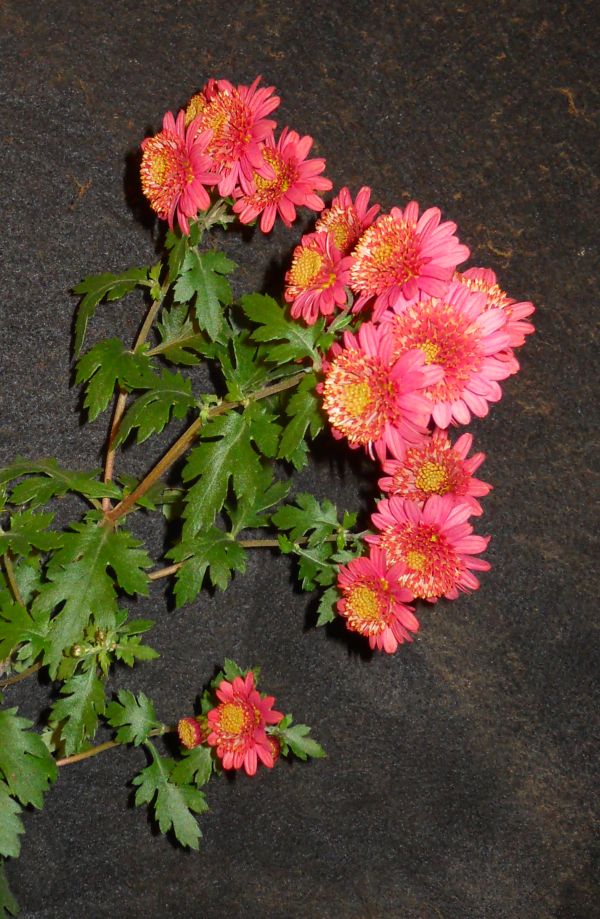 thanks for posting. I've always appreciated the smaller korean style mums. When I was in a club learning, I was the oddball, as everyone else seemed interested in spiders and gigantic big blooms. Finally got so that between all my hobby clubs, I had to cut back the time on one..... I still keep one plant going from year to year. They bring me much joy, and fit in nicely to a fall toko. It's been a few years since I've quit going to Japan each year. Used to love to travel by train and at many stations along the way, would be a nice mum display.

Bill Valavanis has done quite a bit with chrysanthemum as bonsai.  Maybe he can chime in.  I seem to recall articles in International Bonsai.   One of my older bonsai books (1960-70) had, I seem to recall, a chapter on mum bonsai.  I think Dale Cochoy also has done something with them.

I remember -- back in the 1950s, while we were living in Japan with several tables full of black pines in the house below ours on the hill -- my mother doing something with them.
_________________
Jim Lewis - lewisjk@windstream.net - Western NC - People, when Columbus discovered this country, it was plumb full of nuts and berries. And I'm right here to tell you the berries are just about all gone. Uncle Dave Macon, old-time country musician

Thanks Jim,
Yes, mums have been around the bonsai hobby for centuries, they go in and out of fashion. Seeing how poor my examples look in photos, I understand now how diligent one must be to turn out a nice bonsai mum. Makes sense that they are currently "out of fashion", or at least relegated to a minor player role, as there are many other nice plants to use that take less frequent attention. Maybe next year I'll be on top of it enough to have one or two better looking mums. In the original post I did put up a link to Dale Cochoy's article on the mums. I don't think he is doing much with them these days, but if he's still working with them, I'd love him to post in this thread. (Dale, you reading this?) Bill Valvanis has added good constructive information every time I've brought up this topic either here or on another forum. He has been quite helpful. And some years he offers Chrysanthemum (Nipponanthemum) nipponicum, (the Montauk Daisy) on his website, during his spring bonsai stock sales.

Today`s photo is another cutting of `Rose Maiko' in a Sara Raynor pot. It is about 10 inches tall from base of pot to the top flower. Again same age as the others, a 5 month old cutting. It opened later, as it was pruned later than the previous cutting. As soon as I'm done with enjoying it, it will get pruned to a couple inches, and put under long day length, in the orchid light garden. 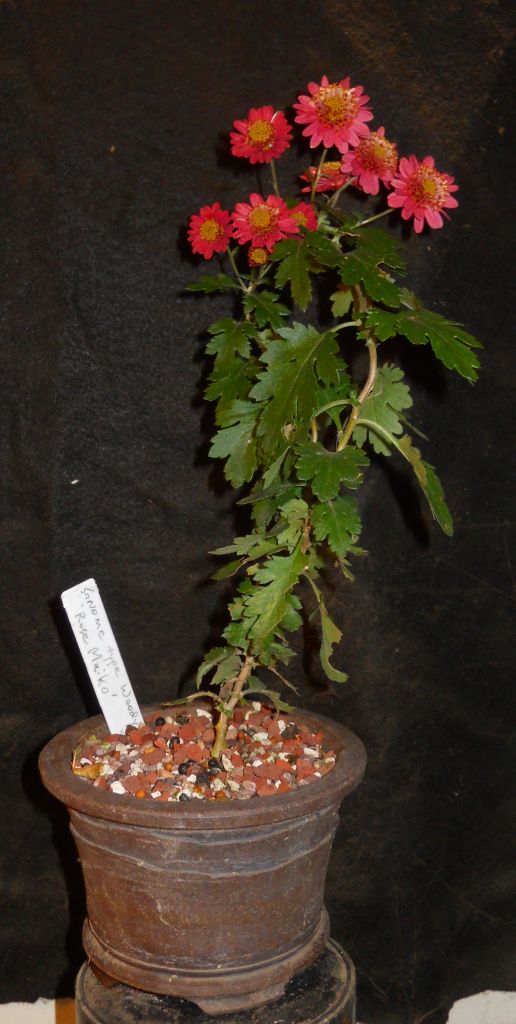