Myself and Mike were messing about with some ideas today and this was the result, the slate is Welsh the tree(Larch), is Welsh and the Moss is Welsh, so this is true Celtic Bonsai! 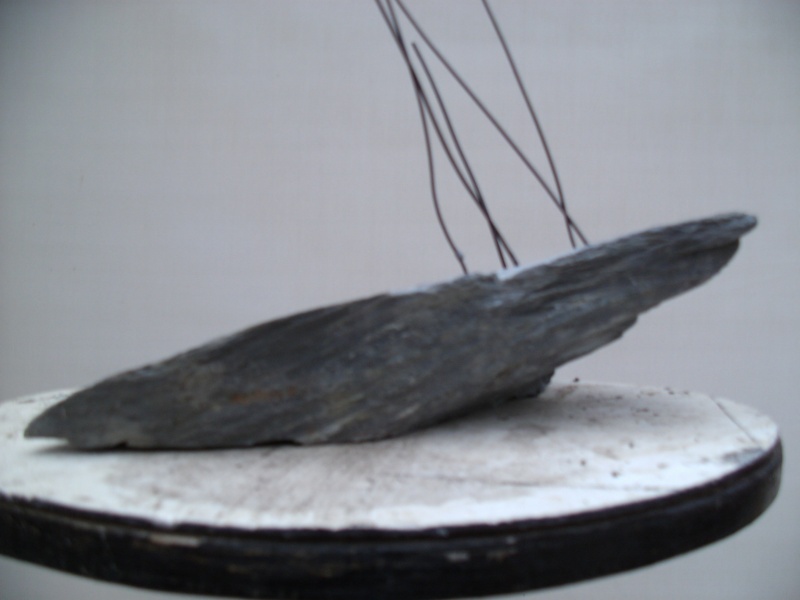 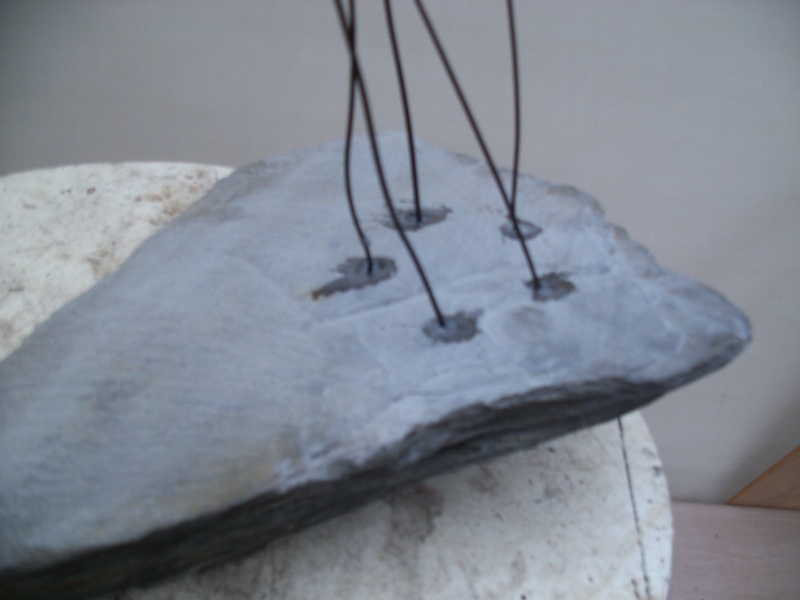 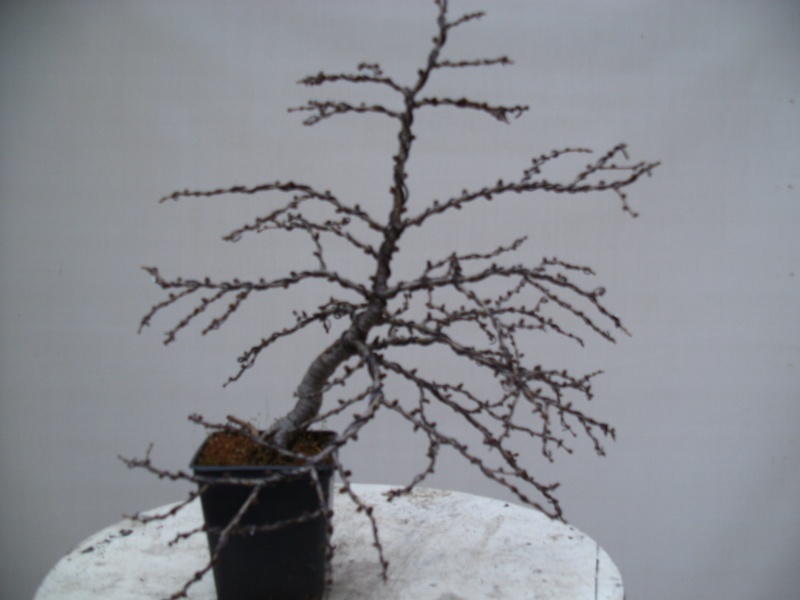 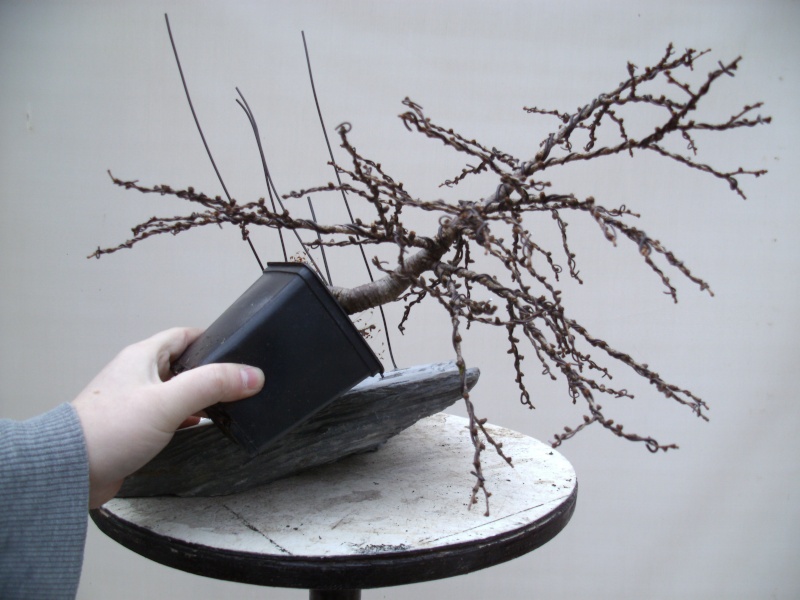 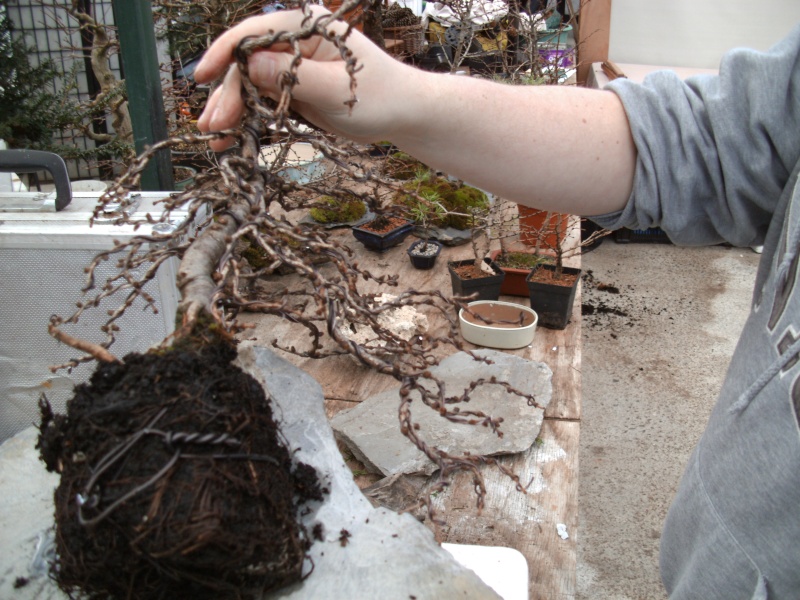 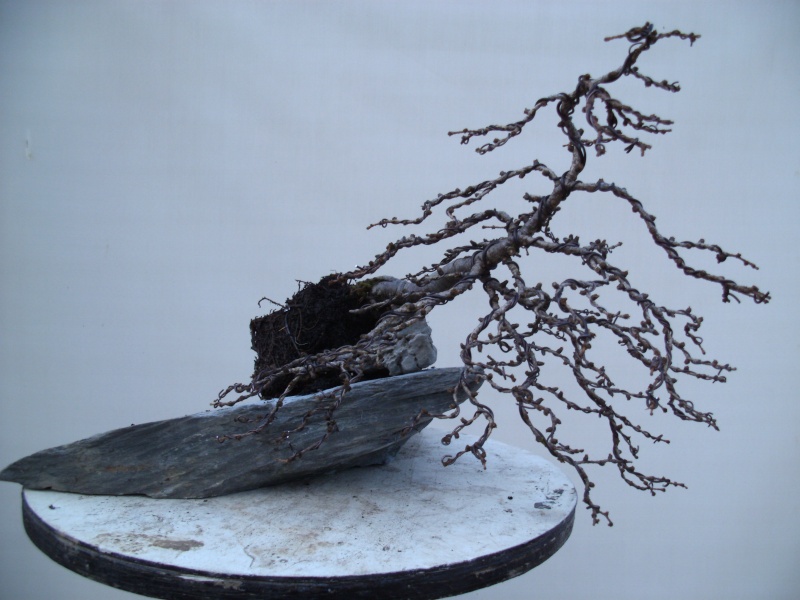 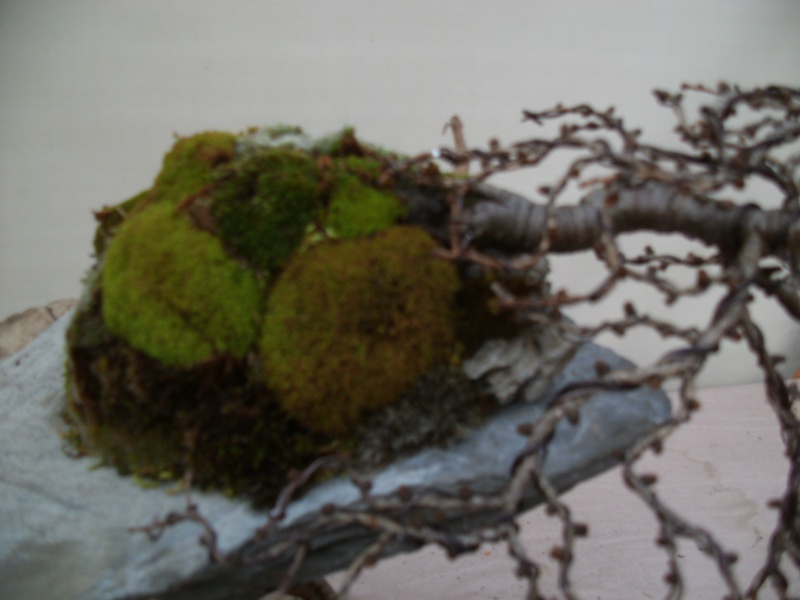 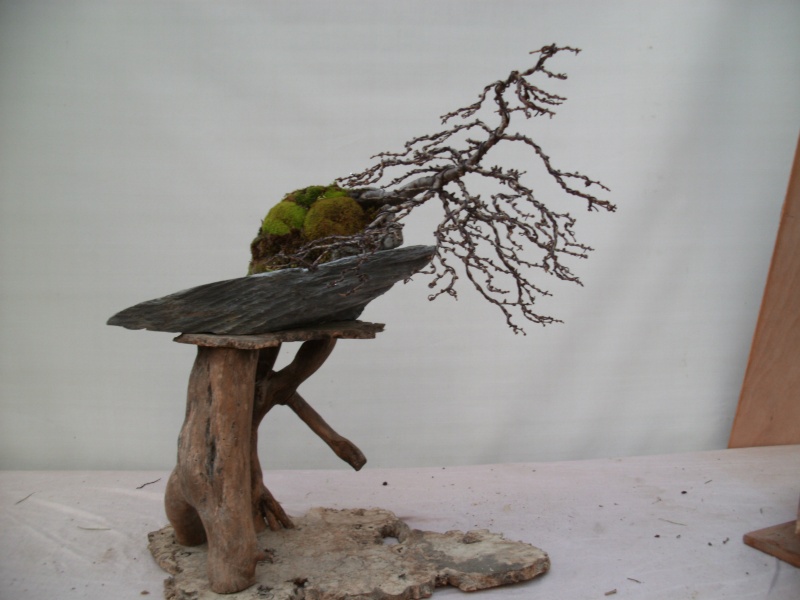 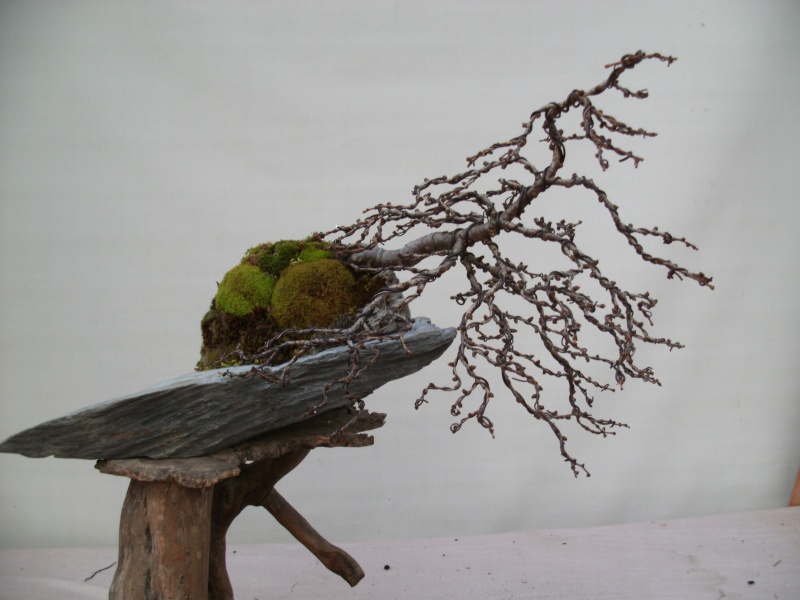 I like the tree, and I like the way you've secured it. What are your future plans to develop this?

farkin' 'ell !!!
i dont "know" art, but i know what i like !
thats some spectaclular single day celtic craftin' !!!
(could use a little "believability" on the downhill side, but still... ! )

Thankyou Kevin and Daniel for the replies
Kevin you are bang on the money and it is something that Mike and myself noticed, the back side of the slope should be more gentle, this has been mostly Mike's work and if you look back in my posts you will see how well his trees are looking, its great to work him.

Thanks for posting the pictures Chris.

I still want to remove a few of the branches! ;-)

The slope is good, imo. Perhaps soil and moss covering the entirety, with vertical trees behind to explain why this tree is leaning so...

chris wrote:Thankyou Kevin and Daniel for the replies
Kevin you are bang on the money and it is something that Mike and myself noticed, the back side of the slope should be more gentle...

i was going to whip up a "virtual" but arthur joura raised a good point in his arboretum thread about folks taking liberties with other folks work and photos by creating un-invited virtuals...

Nice tree, rock and overall effect, I like it.

If it were mine I think I would have tried positioned the tree in the other direction first (leaning to the left, opposite to the direction of the rock) but I've no idea if that would have worked. Perhaps you tried that or not, whatever, you've ended up with a very interesting and unusual composition anyhow.

You guys seem to love your larch and you'r certainly producing some very interesting work. Thanks for sharing and keep posting!

By the way, a couple of questions if you don't mind? Are the wires drilled right through the rock or just glued to the surface? If it's the later what do you use? Must be pretty strong stuff.

Also, do you anticipate problems keeping this tree hydrated during the summer? I mean, I know your in Wales and it's not exactly a tropical climate but even so

By the way, Kevin, I also saw Arthur's comments about virtual images. I may have got the wrong end of the stick there but I didn't think he was criticising people offering unsolicited virtuals as such.

Rather I thought that he was just pointing out that once upon a time (not that long ago) you couldn't post a tree picture on this forum without being inundated with virtuals whether you'd asked for them or not. Now when he posts an image and actually asks for ideas he didn't get any.

Personally I think that offering a virtual image of someone's tree as a contribution to what is after all a bonsai discussion forum is not only entirely reasonable but also often very helpful. I certainly don't see it as taking liberties. No one is under any obligation to follow the advice or suggestions made here they are just that, suggestions! Offered in good faith I'm sure.

Actually the fact that someone has taken the time to make a virtual image of you tree should really be considered a compliment. I wouldn't be worth making a virtual of something which had no potential after all.

Oh and don't forget that there's also the gallery section of the forum for those who specifically want to post images without receiving advice or a critique.

Of course that's only my opinion, others may disagree but I'd be really surprised if any of the regular contributors here were offended by your posting a virt! Go on mate, let us see your idea

Richard S wrote:
By the way, a couple of questions if you don't mind? Are the wires drilled right through the rock or just glued to the surface? If it's the later what do you use? Must be pretty strong stuff.

Also, do you anticipate problems keeping this tree hydrated during the summer? I mean, I know your in Wales and it's not exactly a tropical climate but even so

You can use this method on any slate/rock piece as long as the surface is deep enough. Drill into the surface about 1/4 inch. Fill it with Araldite and stick in a wire with a turn back. Let it dry for 10-20 minutes and away you go.

Good point, I don't think we'll have problems but its something we'll note. Its like any tree, we'll make sure it is well watered once/twice a day depending on the temperature. Under the moss is a compost mix to hold the water, not as free draining as other mixtures we use. It will be something to look at though, as the slate itself could heat up and retain the heat longer.

I have a few larch that are destined to form a forest in due course. I was planning to put the in a conventional pot but having seen this I'm now thinking of planting them on a slab.

Hi Richard,
Thanks for the reply, if you are putting a forest together why not come down for the weekend and we can work together

Thanks for the invite Chris, very tempting. You guys are doing some very interesting work. Unfortunately it's a fair trek over to your neck of the woods!

The furthest west I'll be going anytime soon will be the Swindon show on the 22nd.

Cheers for the inspiration though. All I have to do now is find a rock slab (not as easy in East Anglia as I expect it might be in Wales)

Experiencing the base of the earth containing bonsai is more critical in bonsai compositions that are more natural in feeling than formal. A pot edge that subtlely meanders in height around its edge (e.g., shallow nanban pots) emphasize the infomal line between earth & pot. When marble slabs with rims of modest height replaced deeper pots for water & land penjing (noted in D. Koreschoff's text), it was effective to better emphasize the impression the earth' margin. Having your bonsai rise from the backside of the stone is less inviting. As arranged, the stone has an imposing front face which breaks the eye from following the transition from bonsai to soil to rock 'container'... & probably to a supporting display board when it is ready for exhibition.
_________________
... visit the U.S. National Bonsai & Penjing Museum, Washington DC USA-- http://www.bonsai-nbf.com

But I too find it a little unbelievable. I does not appear wind blown, and everything else, snow,stones, fall downhill.
So to find the reality eludes me.

As a Bonsai, with everything going in one direction, the eye falls off the composition way too quick for the work you have put in.

I appreciate the work, I think if the tree were turned to the left, I could enjoy it as well! Snow battered until the apex that manages to grow over the snow level, finally grows up a bit. The Tree is designed perfectly!

The best part is.....the holes are still in the right place!

hey sorce... i agree about the reality being elusive which is why i suggested some "downhill believability"

and seeing as how i was invited to do so*, here is what i meant (or an approximation of what i meant 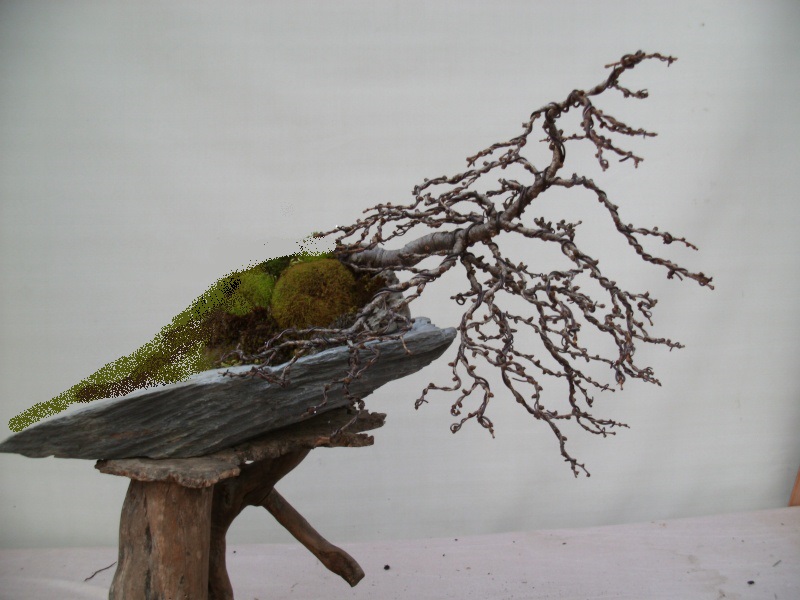 A great and creative composition Chris! Those two "lowest underside branches", are to me throwing off a more natural appearance that could be achieved. Is this inspired by one you've seen though? Maybe a bit of "in-my-face, now shut up" in order? 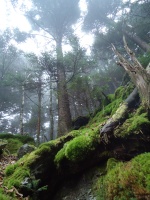 It's a nice composition but the flow of the rock is right to left. The tree's movement is left to right.

Thanks to all you guys for all the replies, very valid to a person.
With the tree the other way around it would sit more easy on the eye I agree, but for me the tension in this direction gives a very interesting image.
We do a lot of this sort of planting, here are some from this week that are maybe a little more "conventional" 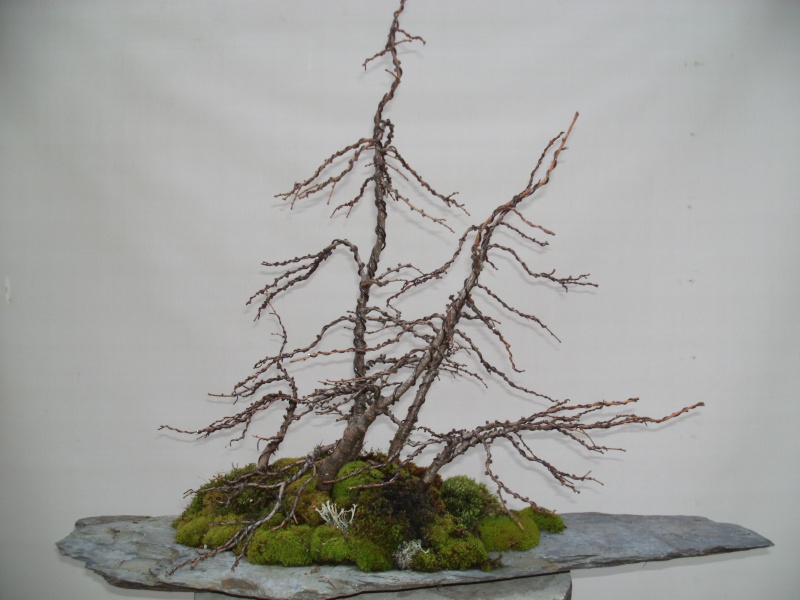 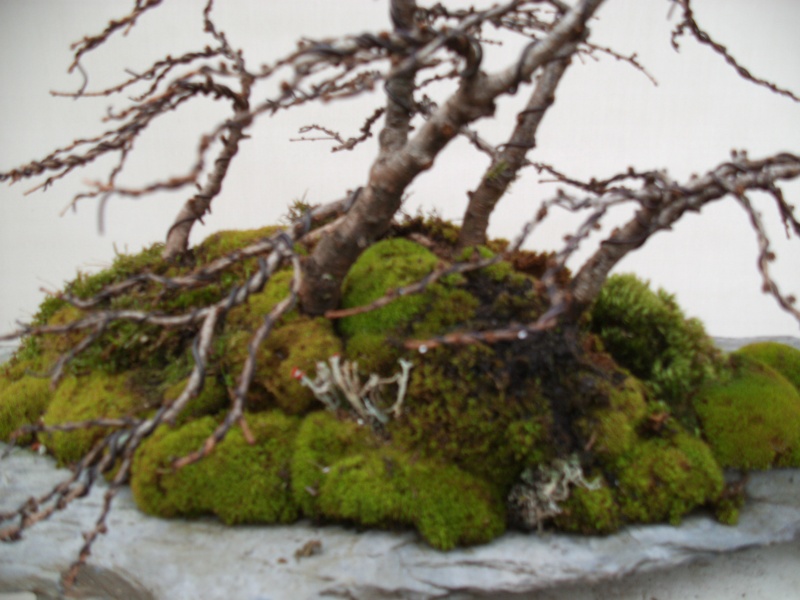 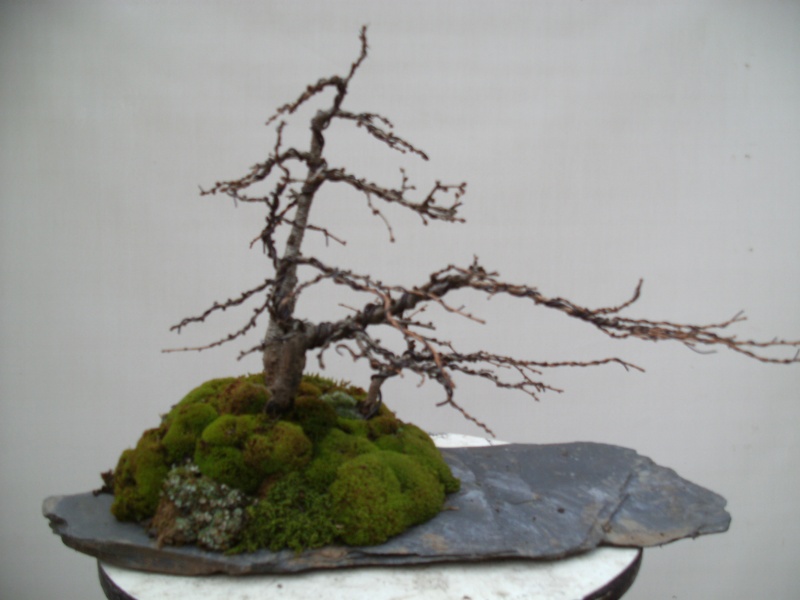 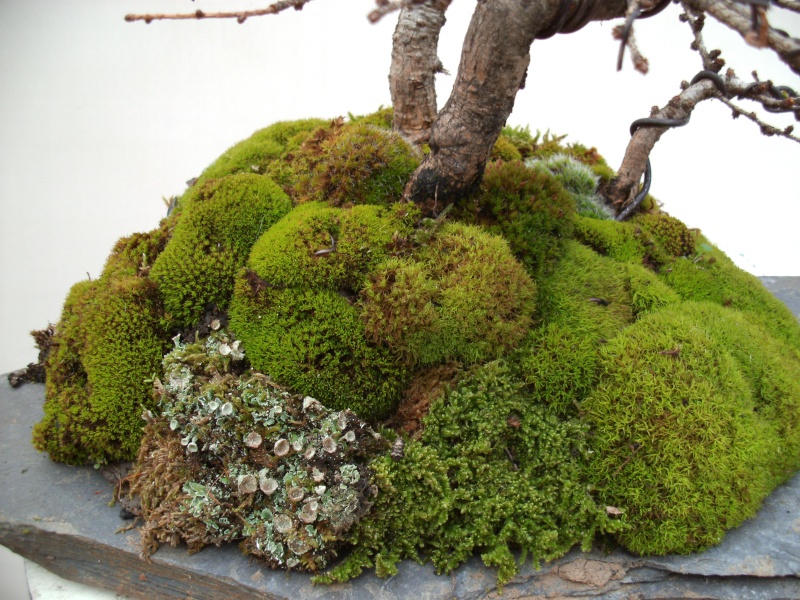 This planting is using bogwood as a base 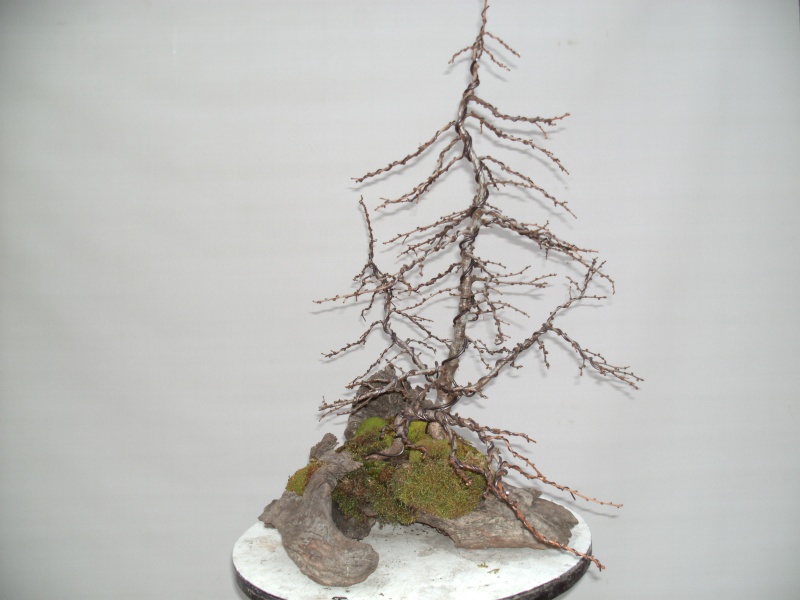 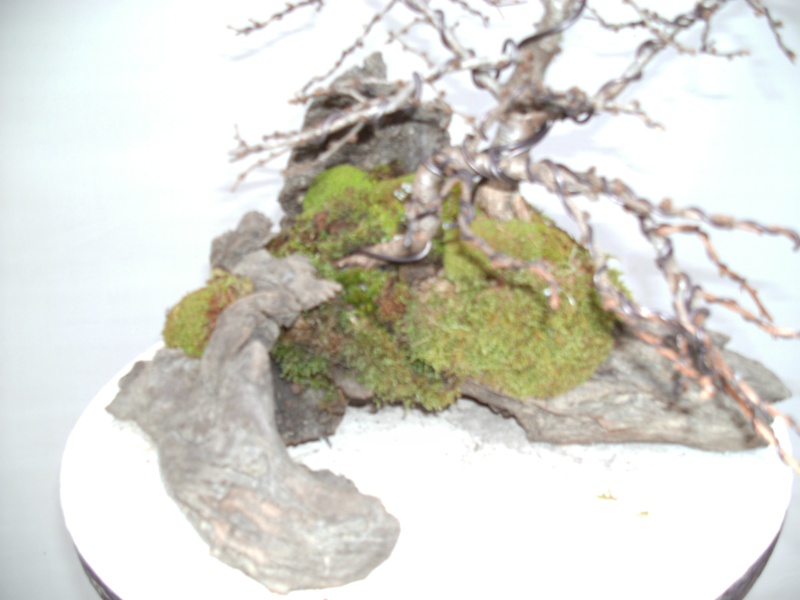 Kevin, you have a way with words

The tension, totally freaks me out!

It is completely different than the rest, I understand where this comes from a lot better now!

Similar topics
» To moss or not to moss redux
» slate slabs
» Slate Bonsai Pot
» Got Moss??? Let's see
» Kusamono and Me