I acquired a twin trunk black pine from an older gentleman friend in flagging health at this time one year ago. Unfortunately, his condition didn't allow him to care for the tree as he wanted and it was in decline. After putting the tree on the bench and assessing options, the decision was made to let the tree rest for one year to regain vigor. After successful wintering, the tree was fed well, watered well, given good sun and regained vigor quite well. No top or root work was done during this time. My question concerns two points, (1) Should repotting be done,(soil is VERY slow draining) in the same year as shoot removal (last years buds have extended and have set next years spring buds already)? (2) If performing both procedures are a risk to the trees health, should repotting be done and do now needle/bud work till a time when the tree shows good vigor? Just looking for a few good words and a general sharing of experiences. Good luck to all for the upcoming winterizing worries after last years tough New England,and nation-wide winter.

This fall I would do the standard bud reduction to a pair at each terminal and removal of all but about a dozen needle pairs on each terminal, leaving a few spares on weak branches and fewer on the strong branches.

In the spring repot and see what happens. If the tree explodes with growth due to the better soil then cut the candles. If it just grows at a moderate then let them grow. My guess is that some will explode (cut them) and others will just grow (leave them) as you reinvigorate the tree and restart the path to strength equalization.

Thanks for the suggestions, Marty. The thing is, I'm more concerned with this years growth. I would like to cut this years shoots back to last summer's needles and hope for summer buds at that cut location. De-candling next spring's growth will leave me with a long, leggy branch. I want to avoid that at all costs. Now I'm not entirely sure summertime is the proper time for such a drastic pruning.

LanceMac10 wrote:I would like to cut this years shoots back to last summer's needles and hope for summer buds at that cut location. De-candling next spring's growth will leave me with a long, leggy branch. I want to avoid that at all costs. Now I'm not entirely sure summertime is the proper time for such a drastic pruning.

You can get lots of fascicular budding if you wait until next spring to cut the shoot - you can cut more than just last summer's shoot, if need be. You may also do this now, but it won't be as effective at producing back budding.

I had imagined that would be the tree's response to shoot pruning of this years growth. My worries lay in the proximity of repotting and working the top of the tree. I would imagine repotting the tree in spring, watching the tree's reaction and measure it's vigor. If the results then are positive, and then after identifying strong growth areas, I'll just treat this years shoot and next springs candle as one long candle and cut back to last summers needles in these strong areas. Mid-strength areas will be studied at this time as well. I don't plan on working weak areas until spring '16. Still debating with myself about needle plucking strong areas. I would believe that having as much foliage as possible after repotting would help stimulate root growth. Something about auxins or such like....Please feel free to share thoughts....

Often, the top inch or so of soil is removed in the fall to help the drainage until you can do a proper repotting. A photo of your tree would help. I have occasionally used a chopstick to "poke" some holes the poor draining soil. It sounds like an interesting tree, Good luck!

Thanks all for your responses. Still working on posting photos. As the family will be out of town this weekend, I'll be able to remove old wire and maybe post a picture. Have a great day and good luck with YOUR pines!!

If you do too much at once, you risk the health of the tree, it has only had one season to recover from what was likely a multi-year period of neglect. Don't pull a lot of needles now, they are helping to strengthen the tree.

Osoyoung is right about the fascicular buds, they remain capable of being activated for a number of years, more than just one year. You can, when the tree has recovered, "candle prune" back to 2 or 3 year previous points where candles emerged. Peter Tea was teaching us about this in my last class with him. So key would be to repot, leave the tree become a bush for a second season, let it recover. If you do too much too soon you will keep the tree in decline. Roots are more important than anything else, without good roots, you end up with weak growth, a cycle that could last decades. So get the roots healthy first, don't worry about the growth on top and don't needle pull until you have a plan, you may need 2 and 3 year old needles once the tree is vigorous.

About needle pulling, since you did not candle prune this year, and probably should not next year, leave sufficient needles at each year's growth point, so that in 2016 when you go back to work on what should be a vigorous tree, you will have needles after you prune 2 years of growth off the end of the branches. The old fascicular buds should activate just fine. If they don't, because you left needles, the needle buds will activate. If you remove needles now, you will not be able to prune back hard after the tree has recovered.

Just my 3 cents, it is what I would do if it were my tree.

Thanks, Leo. Very succinct. A very thorough post that would help anyone with a similar question. Quality.

You might know this one already but this video on pines of ryan neil is very interesting and also enjoyable to watch :
http://m.youtube.com/watch?v=Yn1FiRw2JBo 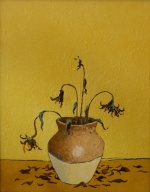 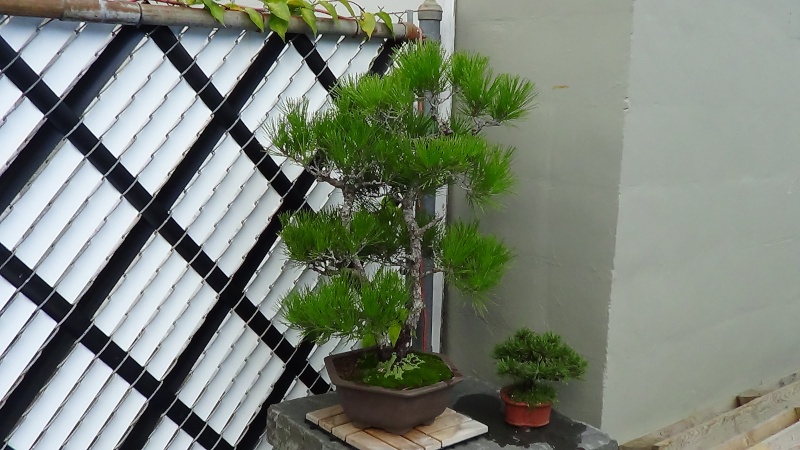 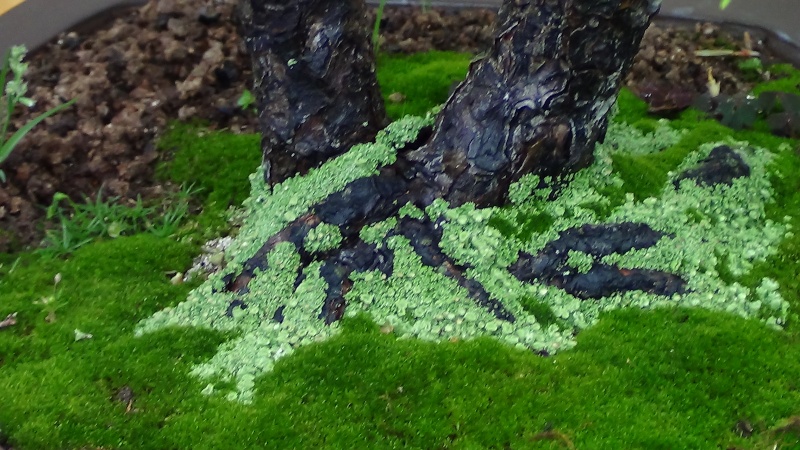 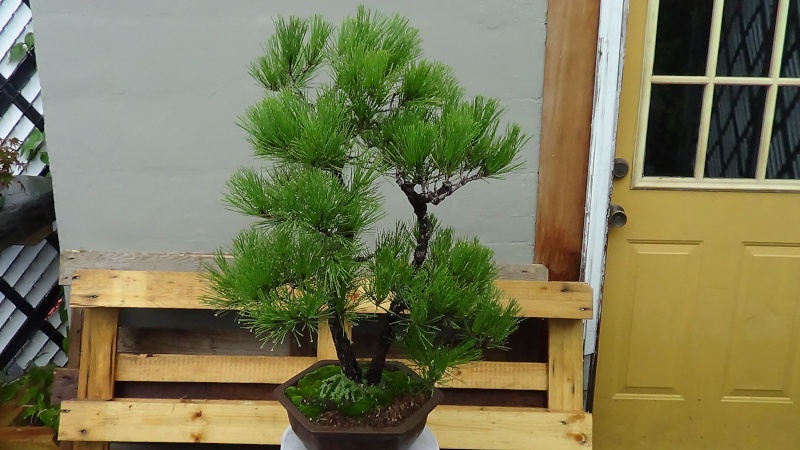 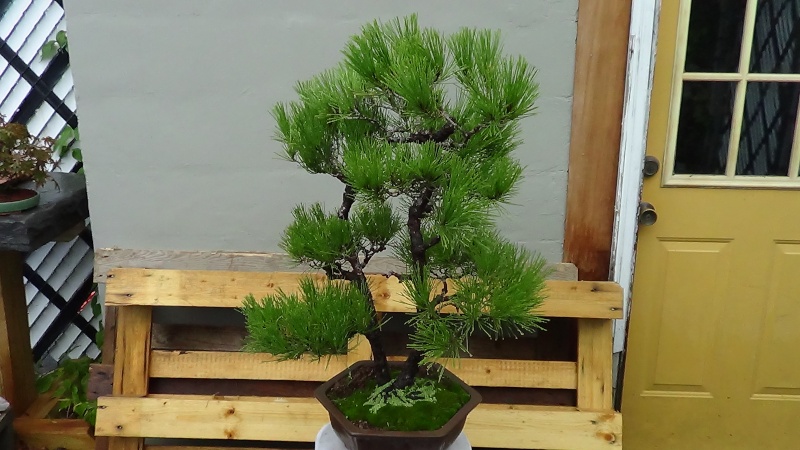 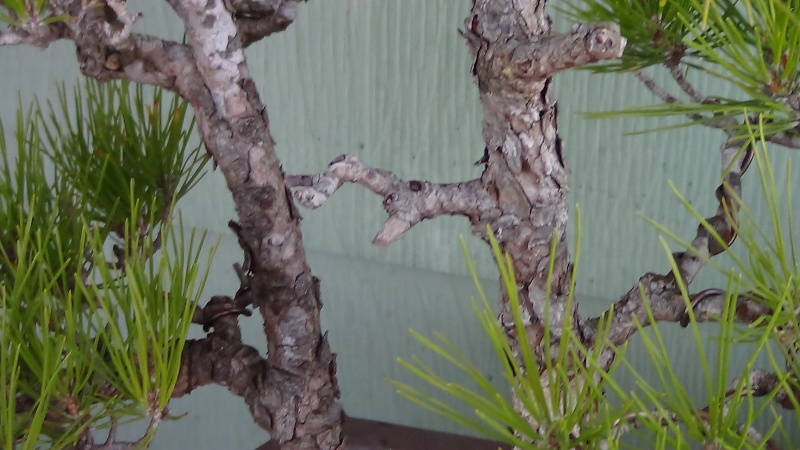 wow... i'm not much of a pine guy, (recently acquired my 1st jbp) but that tree looks to have alot of potential !

beer city snake wrote:wow... i'm not much of a pine guy, (recently acquired my 1st jbp) but that tree looks to have alot of potential !

cant wait to see what direction you end up taking when styling eventually begins.

They can take winter where you live?

just kidding... s/b fine as it was ground grown here for many years by one of other members and is now in a pot and spending its first winter with me in the garage...

its a mikawa if that makes any difference... i will throw up a picture later on after i tend to my garage trees today

Repotting time is right on my doorstep. Still have not found a new pot for this yet. Anyone have any suggestions. Hoping this Guinness will help me get it sorted. Still, some suggestions would be welcome. Have a great day!!

Beautiful tree! Keep in mind that a pine's strength and health are dependent on the condition of their roots.

I think you can repot into the same container if necessary. Use good soil mix. For a tree this nice I would pay the extra money for akadama and mix with pumice and volcanic grit. (Lots of controversy about soils but akadama, pumice and grit is an excellent medium.)

Afterwards, leave it be for 4 weeks and then start feeding, keep in full sun. Don't let the rootball freeze, place the tree in a sheltered spot when night temps are low. (More controversy - I was taught to use organic ferts for pines.)

Personally I would not decandle or prune at all this year.

LanceMac10 wrote:Still have not found a new pot for this yet. Hoping this Guinness will help me get it sorted. Still, some suggestions would be welcome.

ok, now to the matter at hand:

from all responses, the general consensus is roots and recovery are your main concern, so maybe just get it into something bigger for now to give those roots room to grow and add to the trees vigor...

and instead of guinness for the tree, maybe some vitameatavegamin (probably the same stuff as in our beloved superthrive 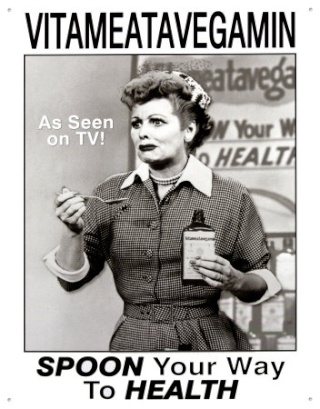 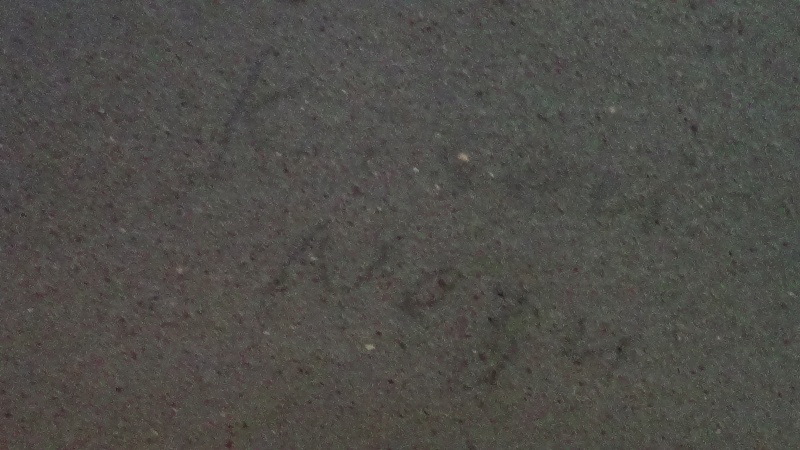 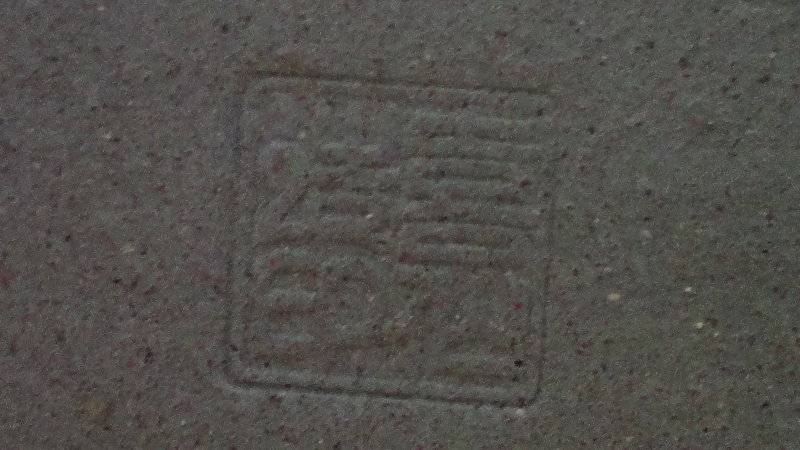 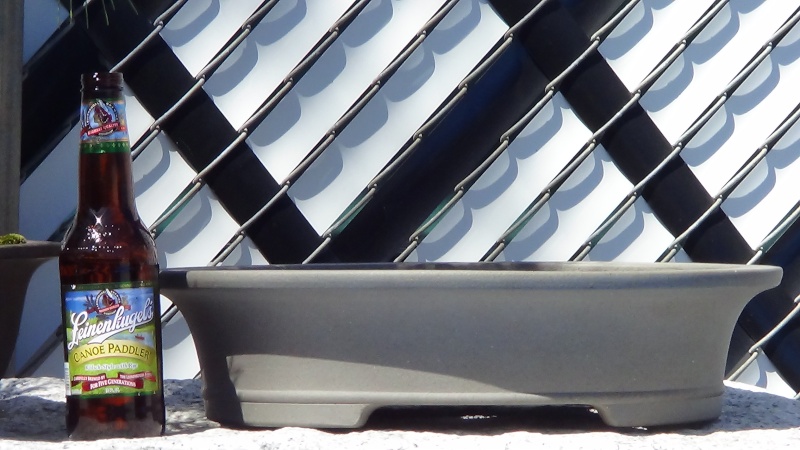 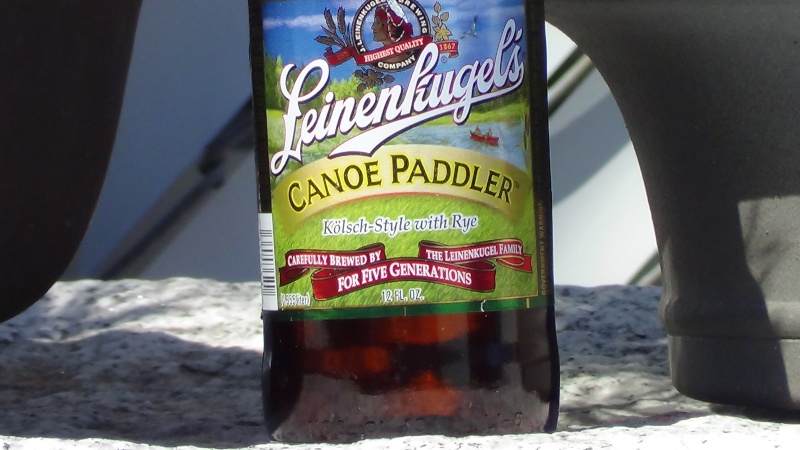 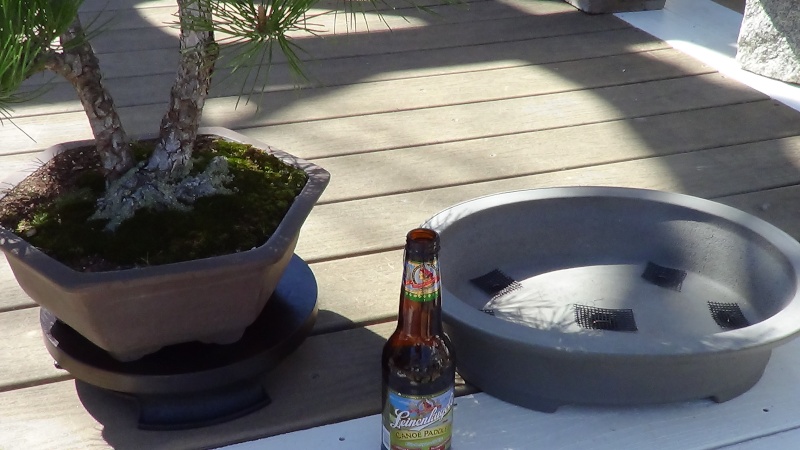 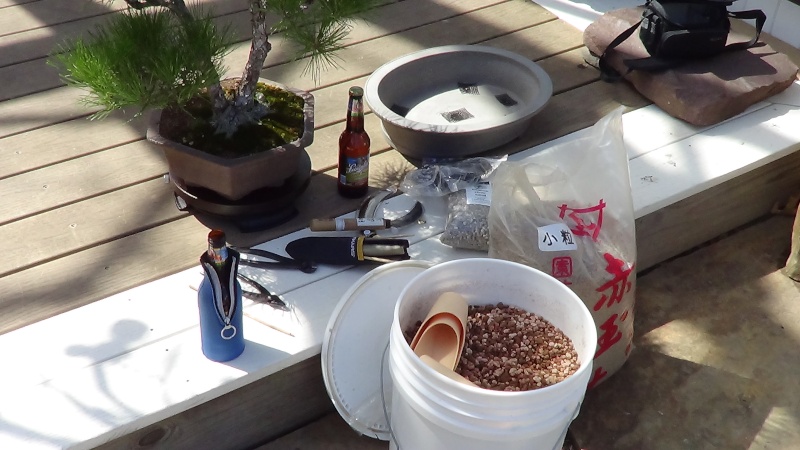 Pot-bound and full of fine fungi..... 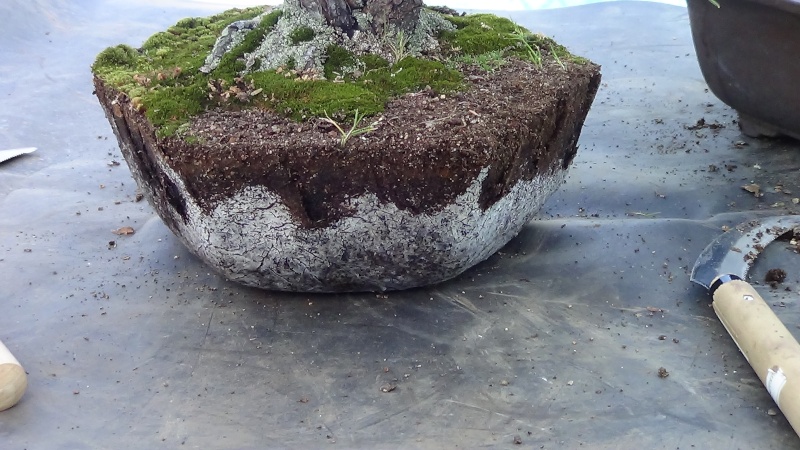 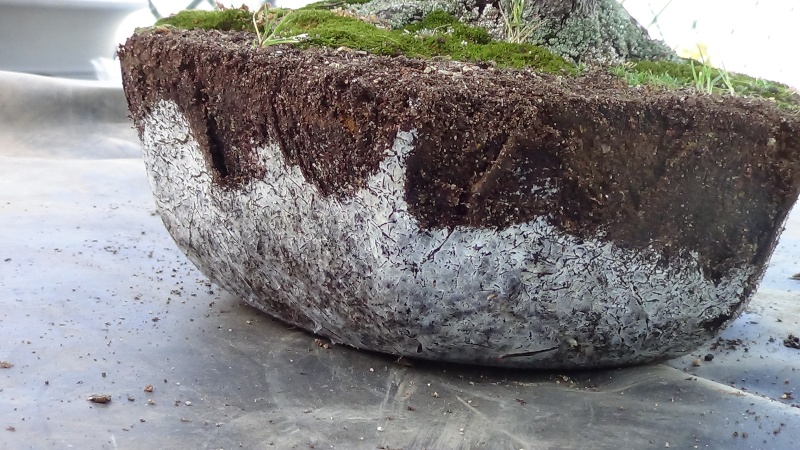 Eat, drink, and be merry, for christsake.... 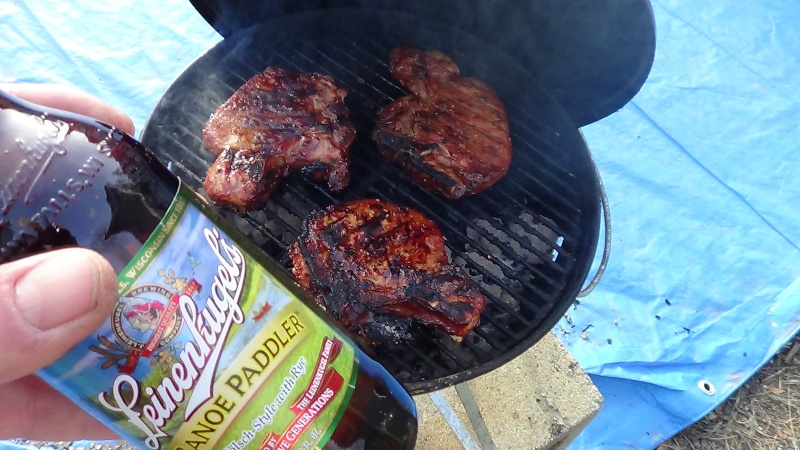 Done. I think it looks pretty good. How about you? Don't work much with Pines, so let's see how it responds together, shall we? 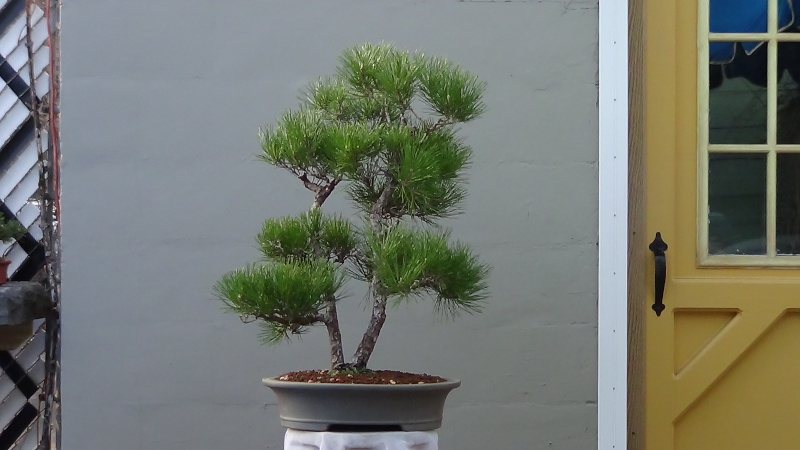 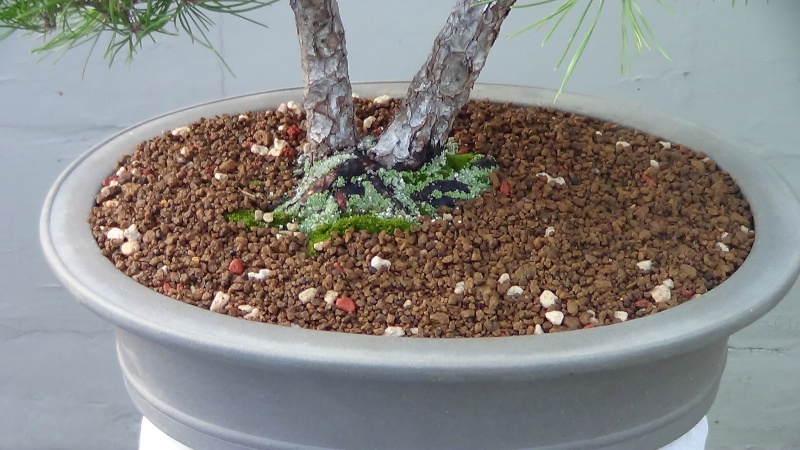 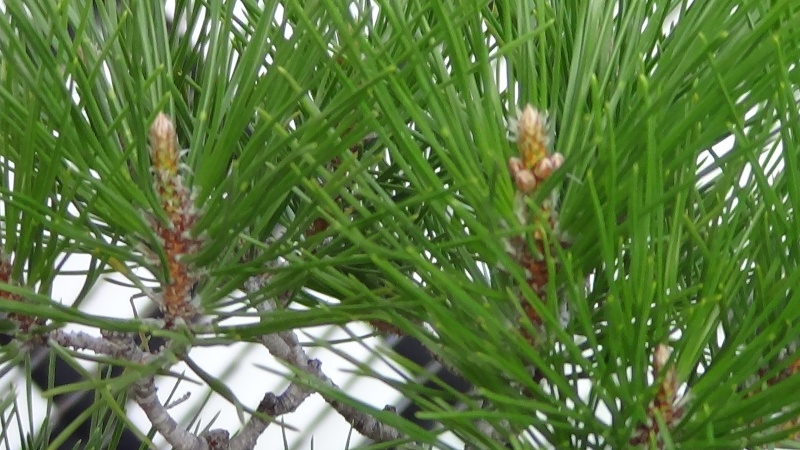 Pile on if you must. I'll try to reply with a classy, dismissive hurrumph......hehehe....

wow... looks very well done and nice positioning in the pot too...

judging by all the microryzizzazizzle in the roots, and assuming you retained a bunch of that,
it should be happier than a pig in slop in its new home (and definitely happier than the pig on the grill

and that canoe paddler is a perfect patio pounder

heres to your tree: *clink*

CAN I GET A HARUMPH ! 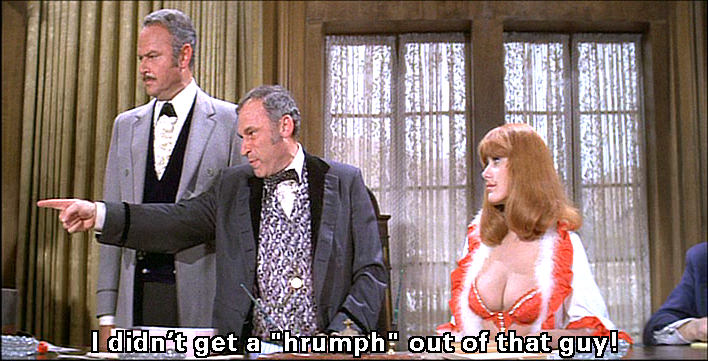 This is a beautiful tree. Clearly the elderly gent loved it very much. Were it mine I'd just let it rip until the new shoots harden (July here) and cut all the new growth back leaving 2-4 needle bundles. That should produce a ton of back buds which next year can be pruned to equalize bud strength. This will give more options for future development and reduce needle length considerably. My 2cents anyway.

You did a great job on the t-plant HOWEVER: I've found that with JBPs Ninkasi 'Believer' (double red ale) is the better match.

Nice sear on the grilled beast too by the way. :)

mikeyeye wrote:You did a great job on the t-plant HOWEVER: I've found that with JBPs Ninkasi 'Believer' (double red ale) is the better match.

so, what do you guys recommend for repotting a rock planting that was knocked over and trashed in yesterday's farkin' winds...

something more malty, and less hops ?
something that would benefit from the salty tears that will be falling in it...

mikeyeye wrote:Nice sear on the grilled beast too by the way.