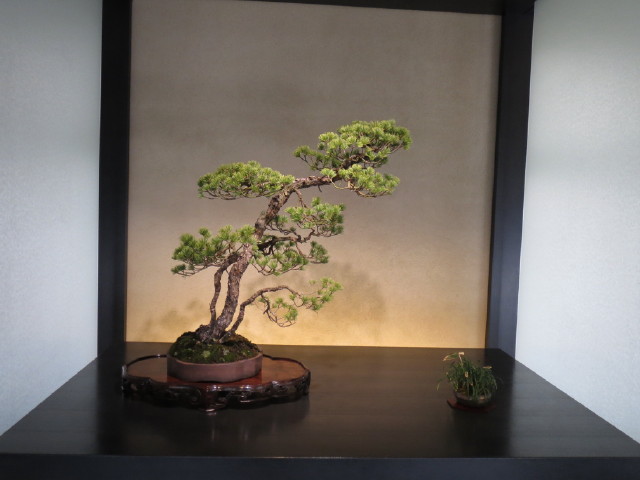 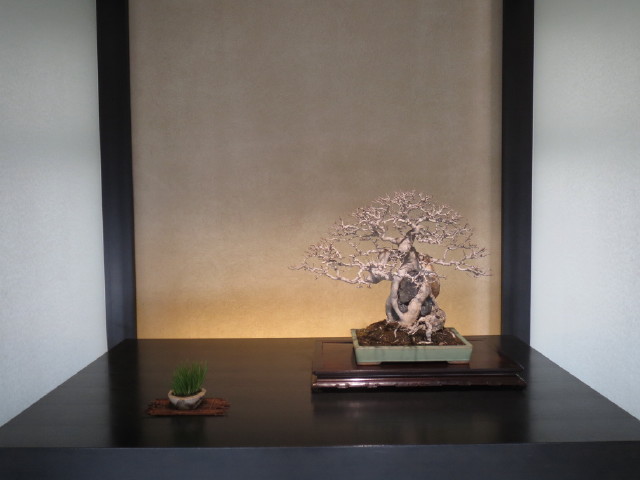 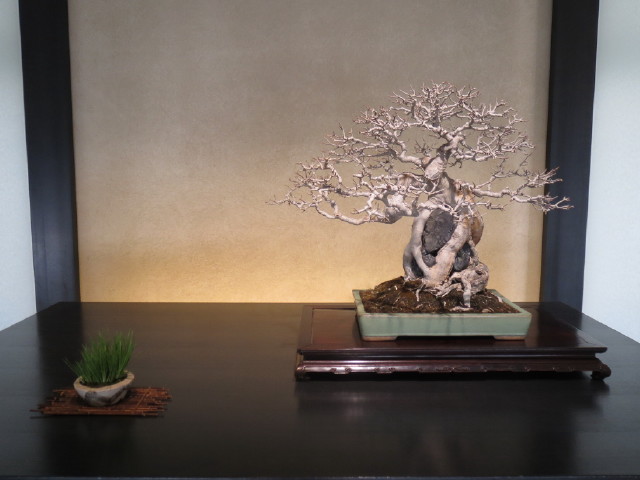 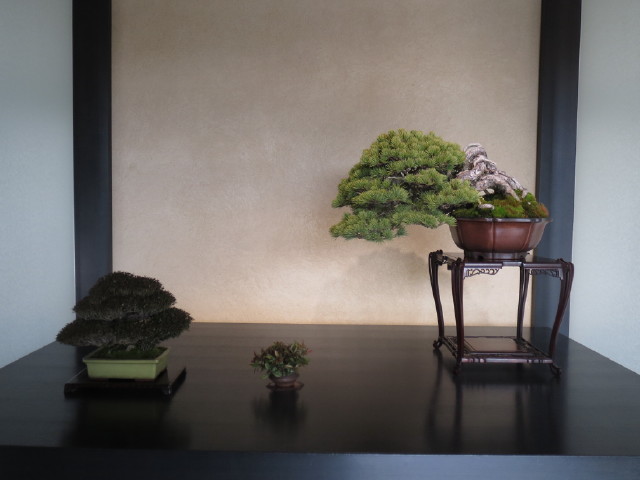 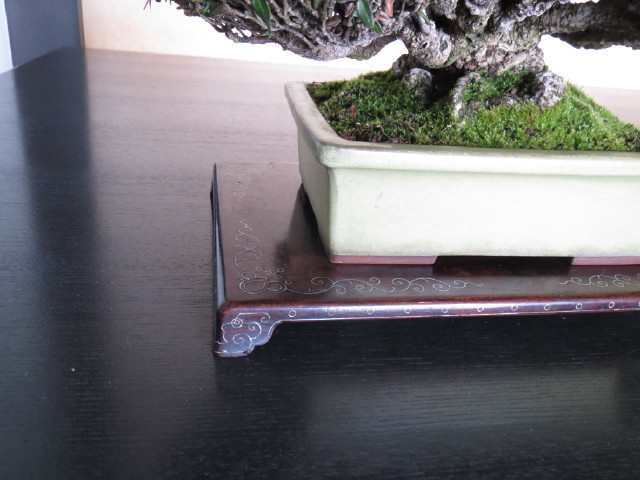 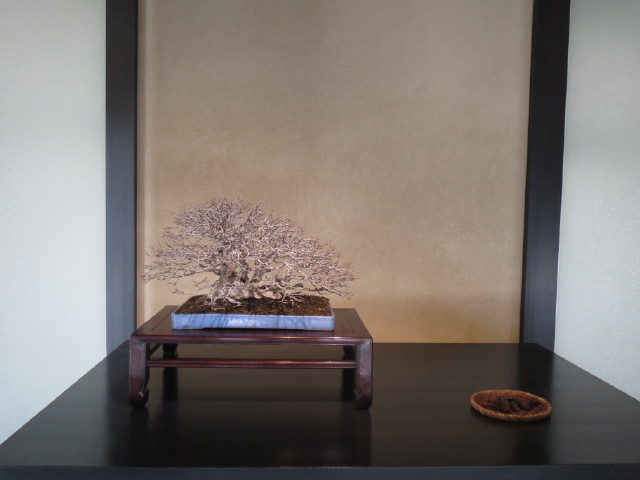 Thank you for the lovely photos, Yvonne! 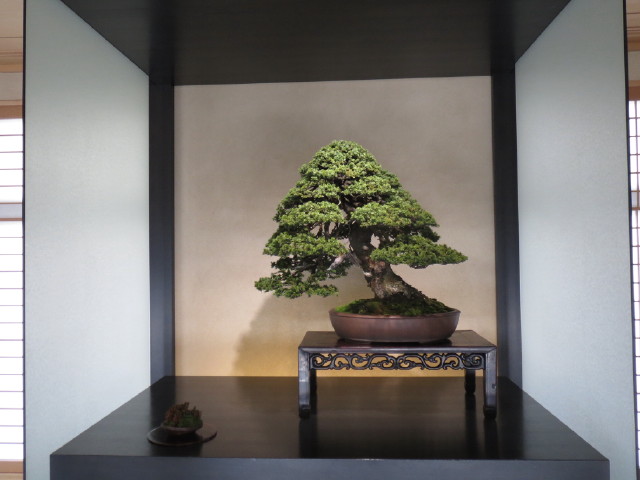 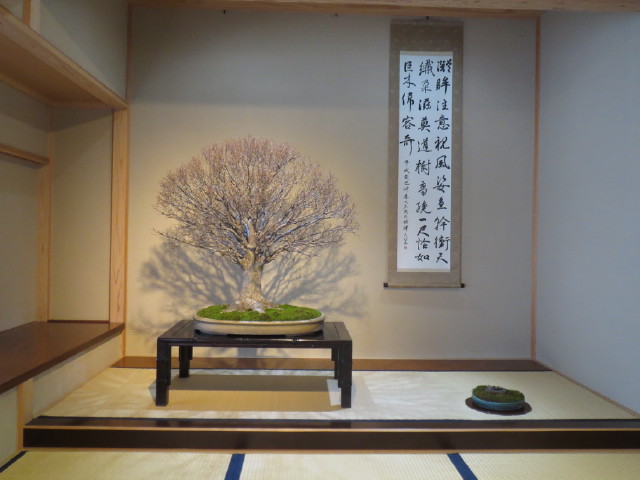 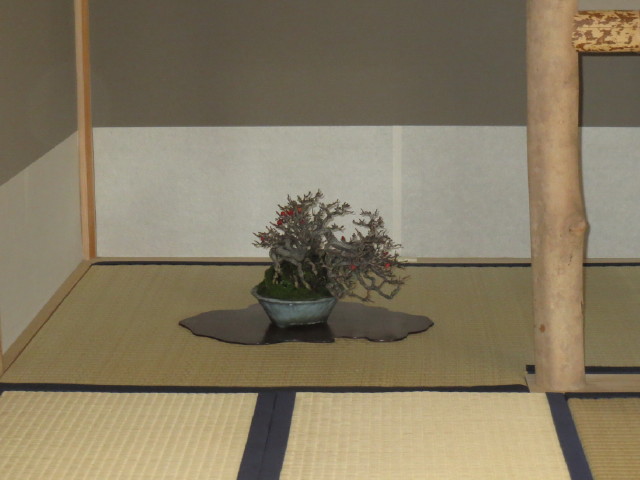 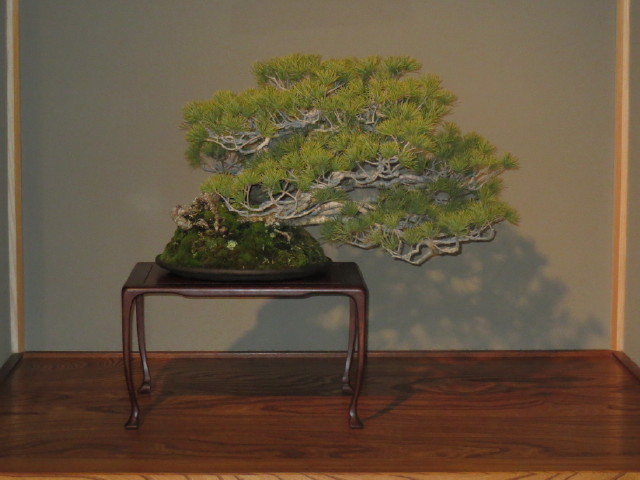 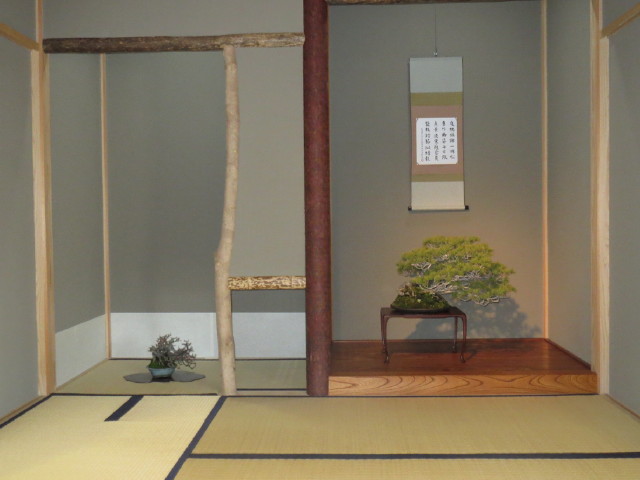 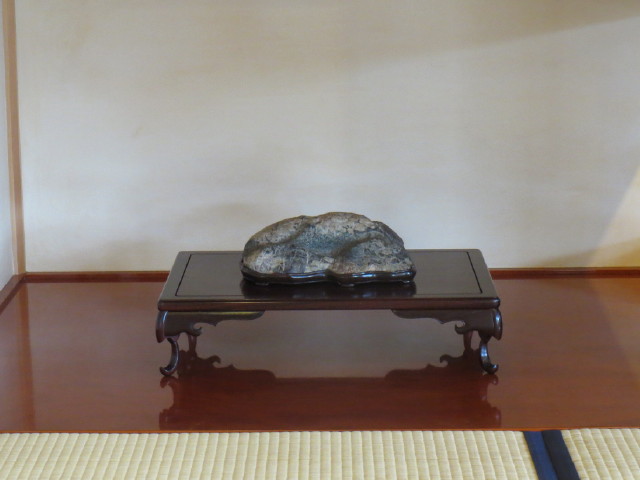 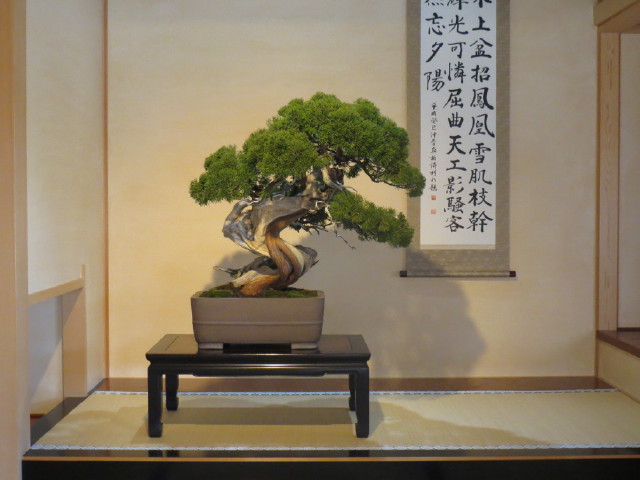 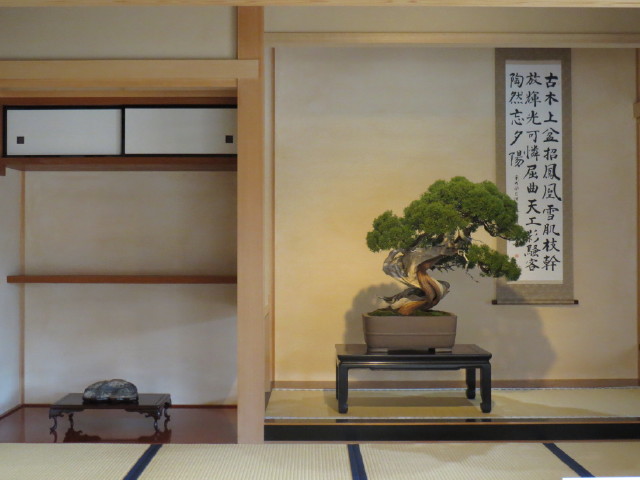 That was all....no need to say, in the garden was also high quality trees displayed, again can I only say- worth a visit.

my nellie wrote:Thank you for the lovely photos, Yvonne!

You are welcome Alexandra

very nice indeed. Thank-you, I appreciated the detail in the stand that you were able to share. Often it's the little thing like this that helps to see while not being there.

Happy you appreciate the detail photos.....all stands was really high quality, elegant, and did not owerpower the trees....theese displays was something to study, and learn from.

I hope you got permission to take these pictures-photography is generally not allowed at the museum indoors,kora

Thanks for posting, there is something to learn about display from these. Thank you for getting the permission to take the photos.

Yes, everybody can learn from looking at theese very elegant traditionel displays, even if the person prefer to make a modern western display insteadt....

Normaly is people not allowed to take photos in the museum...but I was given the permission.
I have to date never taken/posted a photo, I not had the permission to....

As I compare both display areas, I find myself drawn to the richness of the black and white in the first set of photos. Some how everything seems more dramatic.

there was one little blueish pot holding a ? I couldn't tell if it was chojubai or some berries from another variety.

Makes me rethink some things.

One Picture=Thousand Words!
Some different to me display techniques also,
appreciate the tokonoma construction seen,
as I have been trying to make good choices,
less is more! Thanks Yvonne
stonener

The first modern displays were wery dramatick indeed...normaly would i not want to use all this black...the white was not really white, but a broken collor of something else, together with the lightsetting.
Seeing theese displays, with this wowfactor was stunning, the best I have seen...my photos does not catch all the beaty in the displays, and is only ment as a appetizer......the displays are often altered, as the trees need to go back in the garden again.
I think it was a chojubai

I dont know about all the japanese terms for the scrolls...but like you, have I also needed to rethink, as only one of them is placed like i would normaly do, and ever seen......one of the placement is often used in suisekidiplays.
Food for thoughts.....would like to see, and know more about this subject.
At the museum do they speak inglish, and probably is it possible to have theese questions answered.

Yvonne,
Was looking back over your pictures and focused in on picture #12. The suiseki. It shows later as part of a tokonoma display with a scroll and pine.
In your visit did you run across any displays in a tokonoma that featured suiseki in the main display area and not off to the side? From what little i have been able to learn in suiseki tokonoma display, usually stones and bonsai are not used together as they tend to be co-dominant.
Curious if anyone has had experience in this area of suiseki display in a tokonoma, that they may want to share?

This was a good observation

It was the only display that was strange to me....very nice display, but the tree and the stone did not connect IMHO...they are orientated away from each other...and if they are not ment to be shown together, but as two displays, does the scroll with the tree suddenly make sense to me. Maybe some people here know more about that ( tokonamerules).

I dont know any rule about trees and suiseki together...I sometimes use a stone with a tree, but then, will it be a very small stone, not one that will dominate the tree, but i my mind add to a kind of story. 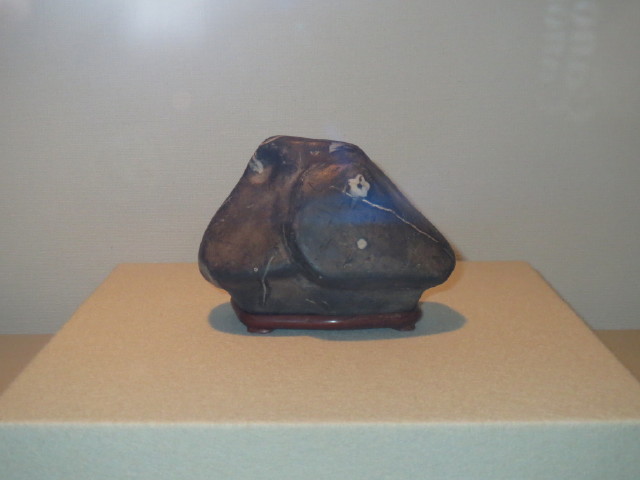 appreciate your remarks.Especially about the relative size of stone and tree. The new stone pic added looks a little bit like a hut stone,heh?

Hello,
Some thoughts on this picture from one with no knowledge of tokonoma guidelines.
The two spaces can be appreciated separately,
but the fact that they are next to each other has a big influence, the window between the two gives a connection as well.
This is a lovely situation because you can combine things in an indirect manner.
Here the placement of the mass of the stone, the table, lines, color, everything is well tuned,
the bigger space with the tree is dominant and the stone does not interfere in that atmosphere in a disturbing way but adds to the story.
This is not always possible in a showsituation, there one has to focus on the space between the two bamboo canes borders and appreciated the display separate from the neighbors display and this is not an ideal situation one aims for in a tokonoma. (But that is all about the art of building a showdisplay.)
There is a lot of playing going on here, note for instance;
-the verticals and horizontals,
-the white-black from the vertical scrollwriting and the white black from the horizontal doors, because the vertical with is written on and the horizontal not, says something about the dominance of the space.
-the scroll is in a informal style,
-the different light in the two spaces is interesting as well but the shade is maybe a bit to dominant,
-the movement of the juniper and the movement of the table legs under the mountainstone,
-the lines of the tatami are facing to the tokonoma,
-the bigger space is lifted a bit from tatami level,
-the two spaces are made of totally different materials.
What do you think would a little kusamone on the right side of the tree be to much?
Sunip

Thanks for taking time to pass along your thoughts. informative.

regarding the use of a kusamono with the tree, I would NOT be in favor of it. If we could have the scroll translated it would probably have some deep thought allowing the viewer to the where and when in their mind
of the tree. A perfect combination to allow the mind to imagine over tea. I think the mind could better picture
then the addition of an element. in this case less is more

Hello Dick.
Yes i think you have a point there.
Much depends on the situation the display is been made for.
The vibration and pattern of the characters are in itself already lovely and one could leave it that way but to know the meaning of the written would add something.
Sunip

Yes, it is a hutstone

The words on the scroll, is probably words of wisdom, or poetry...in this case maybe not poetry, as the kanji look a little statementlike to me....and I feel quit sure it dont speak about this tree.

To add a kusamono would be a 4th. element....the tokoname is build as one unit, and already 3 element is added.....the stone and the tree look away from each other, and the placement of the scroll make it a statement, that was the facts I reacted on.....I have given this a lot of thoughts, and I may understand...not that I want to try to explain...I would rather had it explained by the person who created the display, and then maybe afterwards beeing able to confirm my thoughts. 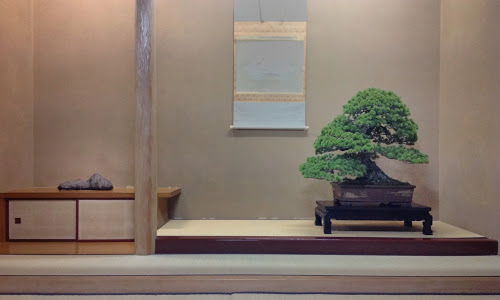 The photo is from Peter Warrens Blog with his comments below.


"Textbook rule freaks will surely point some basic flaws in the display but I personally thought that the stone flowing off to the wrong side gave the display an even more expansive feel. It is something we talked about, and it was on my goading that he did it. He wanted to, but thought people may contradict him, so I said, "rules don't matter for someone like you"', at which he gave a cheeky smile. The migrating birds flying up and over the mountains away to a warmer, better life somewhere far beyond the enclosed space that a tokonoma can come to represent."

Kunio Kobayashi, Peters teacher, studied Keido with Mr. Katayama the man that formed the most refined school of Japanese display.
Uhaku Sudo also studied with Mr.Katayama and is more widely known for teaching Keido. After many years of Keido study teach their version of Keido which represents their personalities and interpreting display through their very educated and refined taste.
The above exchange with Peter and Mr.Kobayshi is very interesting. Display seems difficut to many I believe because people want concrete and simple answers to the Art of diplay and are not willing to study and develop any insight or understanding. Instead the default is to say, we are not Japanese so we can do western display and then anything is acceptable.
Suiseki and Bonsai are always (or almost always) displayed in separate alcoves when displayed "together" in Tokonoma. In Exhibition display the accepted display is not set in stone. In the early 1900's it was common to see Bonsai and Suiseki displayed together in exhibits. Then it fell out of fashion in most circles but recently has been seen again.
Seiji Morimae has also studied Keido and may have the the most educated and refined taste in the world. In his publication WABI#17 he shares images of displays in Daitokuji Temple by the Genkokai. Some are Tokonoma display with Bonsai and Suiseki together but in separate alcoves. Some are what he discribes as Meji period Zashiki Display with Bonsai displayed together with Suiseki in a small room. In October 2012, Mr.Morimae gave a book he had written about the Genkokai and this exhibition in January 2010 as a gift to all the attendees of the Veiwing Stone Symposium. The name of the book is "In Pursuit of Beauty, The Story of the Genkokai,The Formal Practice of of Displaying Suiseki" . This book is a true treasure and I gain insight every time I read it.

Mark, It seems you have spent a great amount of time and effort toward advancing your knowledge on the subject of display and i appreciate your willingness to share. please continue

dick benbow wrote:Mark, It seems you have spent a great amount of time and effort toward advancing your knowledge on the subject of display and i appreciate your willingness to share. please continue

Could have been my words, many thanks

I have been ower several thought by this display...and one of them was....Would I want to see a display like this, from a western person, who do not know what he is doing?...and the answer is no...a Person has to be known, to know the rules before braking them...this will show the displayers temper and personality on the day, and give the viewers a smile on their face, and food for thoughts.

I notished the stone on Marks photo also is turned away from the tree.

Maybe Mark will look through hes book, and see if this is a general way to display trees and stones in tokonomas like the two shown.

Is it possible to buy this book?..I would really want it.

Mark thanks for the peter warren blog. I found the article and read thru it ,in it's entirity. thanks for bringing it to light, I'll have to check it from time to time.