I am an artist and scholar interested in getting in touch with other viewing stone enthusiasts who are developing new strategies for displaying stones. I come to the practice of stone appreciation from the world of studio art. I have taught Asian art history for many years but it was only when I discovered the work of the Chinese artist Zhan Wang that I became aware of viewing stones. Zhan Wang’s highly polished stainless steel sculptures of garden stones pointed me towards Chinese gardens which led to scholars’ rocks and ultimately to suiseki. Being an artist, my relation to viewing stones may be somewhat different from that of most people involved in stone appreciation in the United States. I regard viewing stones as sculpture. I understand them as found-objects. I see them as materials with which to make sculptures and as inspiration for sculptures made from other materials. This perspective shapes my interest and informs my inquiry. The accompanying images are a representative selection of my experiments. They include stones displayed on unique bases, sculptures made from stones, ceramic pieces inspired by viewing stones and non-stone materials displayed like stones. If any of this interests you, please get in touch with me. I would enjoy seeing your work and beginning a dialogue. 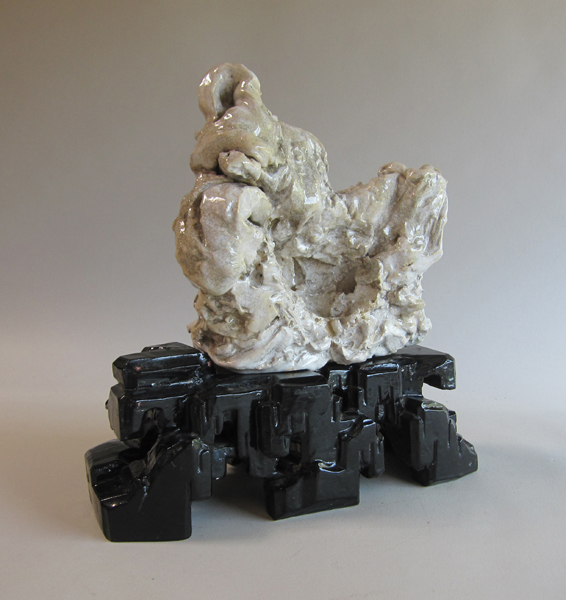 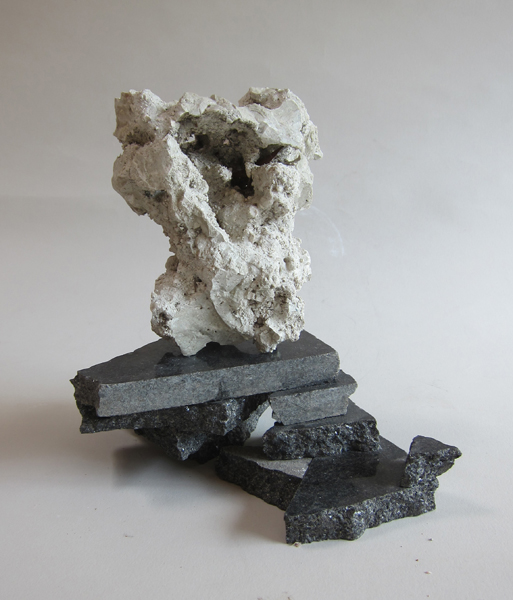 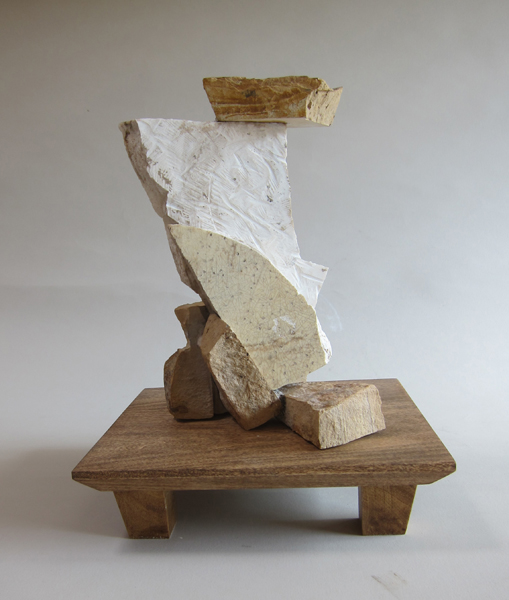 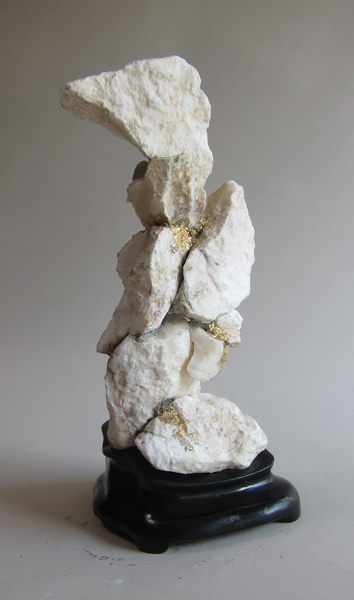 It is interesting to see people play with display of stones ( not trying to make them look/taste like suiseki)...your displays are modern and very diffrent from each other, and the photos is nice....thanks for sharing.

I am sorry you are talking about suiseki? or are you speaking about stones. Where is the dark color, the white is associated to the death in japan, the suiseki cannot be white, and then the shape, what kind of shape, far viewing mountains, animals ones, the stones don't get any shape. According to me every stone is not able to become a suiseki. There are some rules, like in american football; the japonese play with the american rules, I think We should play with japaneses rules and not trying to do bad work or we must find another word to tell that stones but please there are not suiseki....

If you have done any innovative displays of traditional stones I would be interested in seeing them.

I think your stone art is very creative and yes, it doesn't fit the Japanese form called suiseki but neither does many of our displays. For instance my parent /child bird stone is not proper in the suiseki form because it shows two stones in one daiza. This does not follow the rules but I like the stones together and this is what an artist does.

I prefer to call our stone art, viewing stones, which includes your very interesting displays. Thank you for showing us your wonderful stone creations.

Norma viewing stones means that there is a view...... Where is the view?

Perhaps our perspective is different but in art there is always room for change and growth. This artist loves stones and display as we; whatever we call it. Our stone forum has been tolerant of many view points. Taihu's creations are intricate and worthy of showing.

My stone study group take an annual trip to find stones and I find each of us see something different in the stones we collect. The last trip to Lake Superior in Northern Minnesota we enjoyed building stone sculptures in an artist park on the rocky shore of the lake. 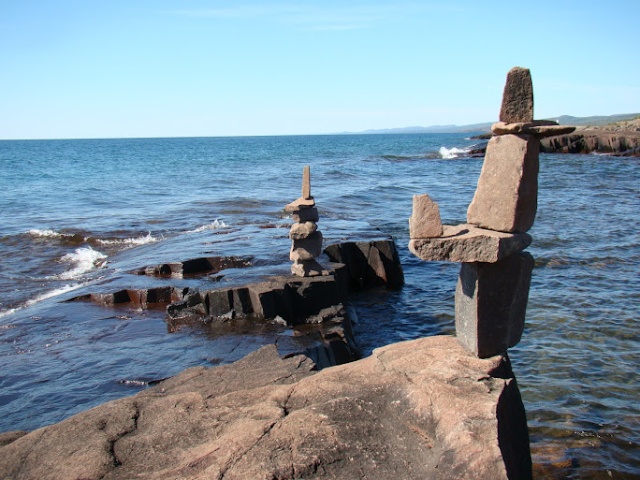 You and your group must have had fun creating theese sculptures...teamwork....thanks for sharing.

ok, as you whant, perhaps one day we will play baseball in every country of the world with differents rules and every body will be happy. I will not.

If you read my statement, you will see that I do not claim that any of my pieces are suiseki. My intent is not to challenge the established protocols of suiseki. My only interest is experimental approaches to displaying stones.

Thank you for sending me an image of your mother/child display. Could you tell me a little bit about your thinking with regard to choosing the two stones and designing the daiza.

The display is very personal...my son found the parent stone from the Temperance River in Minnesota and I found the chick stone from the Buffalo Gap Grasslands in So. Dakota. The stones were combined in a single daiza which is a symbolic nest.

I also have displayed many stones on my bonsai benches as mini-sculptures and studied the Arctic Enuit and their Inukshuk stone figures. I have some figures in my garden. Sorry no photos....

What medium did you use for your first stone's base....it looks ceramic and is awesome!

I like the way that your Lake Superior sculptures extend the angularity of the larger rocks on which they are sitting. The fact that they are at the lakeshore reminds me of pieces done by the artist Andy Goldsworthy. You might be interested in looking at a documentary about him entitled Rivers and Tides in which he does some balanced stone pieces at the edge of the seashore.

Here's an image from the film. The piece of mine that you asked about is ceramic. The base is lacquered wood.

Hi Taihu13... Thanks for sharing your exploration. Located in Oakland, you are able to see leading proponents of suiseki daiza, contemporary seating and artistic mountings at your doorstep.

Oakland is home for California Suiseki Society where Felix Rivera introduced the term daiza to Western suiseki enthusiasts. Oakland is home to Mas Nakajima www.suisekiart.com, who creates traditional & contemporary seating for stones in the tradition of suiseki. Mas also does artistic stone mounting outside of suiseki tradition.

With training in Asian history & inspired by artistic replication of scholars rocks, I hope you are already in touch with Richard Turner, who is featured in presentations to California Aiseki Kai. Potomac Viewing Stone Group in Washington DC is avidly hoping to hear Richard speak in the coming year. Similar to IBC, PVSG is interested in exploring stone traditions and artistic practices including suiseki but not limited to suiseki practice. The club's next exhibition (February-March 2013) will have sections on Japanese, Chinese and American stones & mountings. I'd very much like to see Vietnamese stones included as a particularly interesting, older stone has surfaced.

For a refined alternative of modern style, you might look at Marc Peter Keane's bontei (linked HERE). These "tray gardens" are exquisitely crafted to elevate stones (or other objects) to close observation & appreciation of atmosphere/feeling/tone.

Jim Greaves travels distantly from suiseki tradition, while still respecting its deep cultural roots, in promoting an American viewing stone tradition based on aesthetic sensibility. His exhibition book Beyond the Black Mountain both illustrates and explains why options beyond tradition can elevate display.

Austin Heitzman's IBC thread titled "Wooden Suiseki" (linked HERE) that described his process of mounting wood appreciated for contours that Chinese or Japanese literati scholars would appreciate. I was fascinated; you might be, as well.

Friends who seriously collect Chinese stones often look to books of the distant past for creative ideas in mounting. I am intrigued by the Japanese literati (see Patricia Graham's book Tea of the Sages) influence on presentation of bonsai & the display of naturally contoured objects including suiseki.

I have enjoyed this thread tremendously. Chris' links were very informative and stimulating. Thank you all.
Todd

If you have done any innovative displays of traditional stones I would be interested in seeing them.

I am sorry...this I have not tried....but when i first started up with daizamaking, were the
daizas made of felt, as wood was not my thing.

Harria wrote:Norma viewing stones means that there is a view...... Where is the view?

Quote:
Accordingly, enjoying viewing stones is connected to the characteristics of its owner. The culture of Chinese scholar's rock is a part of the Chinese traditional culture, which has obtained full affirmation since the ancient times. Its simple and artistic form brings the people the beautiful feeling and the spirit of the love.It can arouse the people to love the nature, love the nationality, and love the country as well as the friends and the family. This manifests the ideal condition of appreciating viewing stones. It brings the people warmth and brightness of the spring, and guides people to treat others in a gentle and friendly way. (written by Meng qing xian)

Norma Ibeg your pardon Iwas mistaken, I anderstand your journey, and I relly fall in front of the Taihu13's mine foto.