Today I removed my first attempts at air layering done on two large (2+") suckers on the Crepe Myrtle out in front of our house. We wanted to get rid of them, so I figured I'd give layering a go. I had mixed but interesting results with root formation and I'll be interested to see how the rest of the (living) process goes. The first one I started in early spring, before buds appeared and used rooting hormone, sapgnum moss and clear kitchen wrap. I got some roots, but not all the way around... 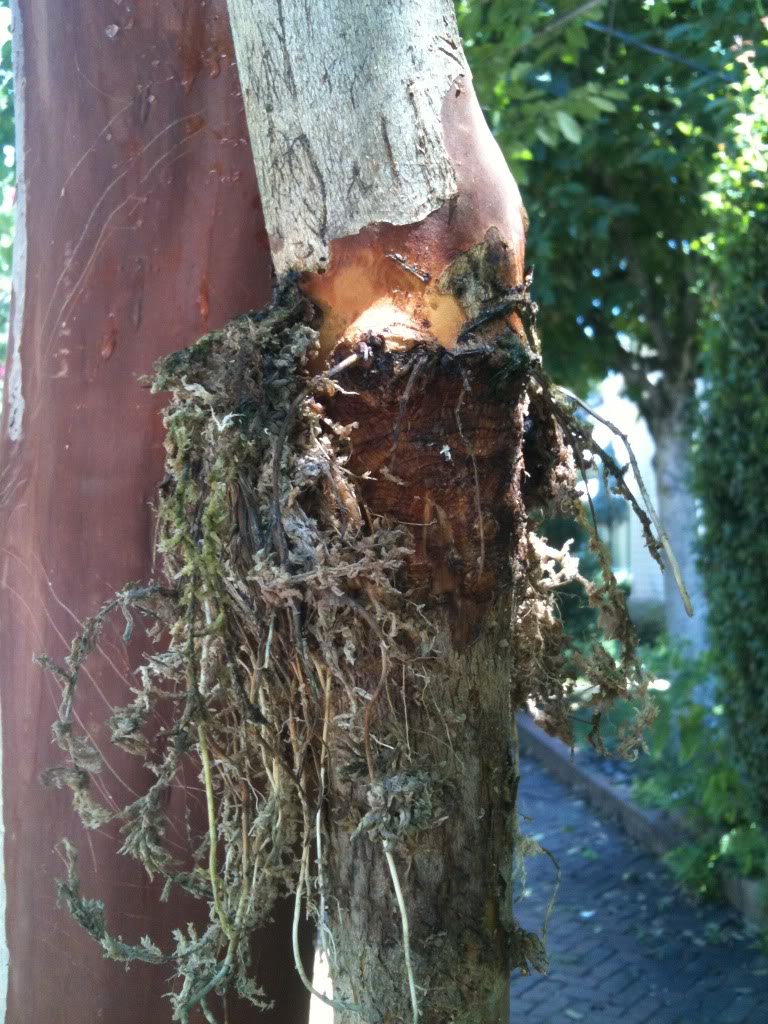 I cut it in the suggested method for broom style, but don't have huge high hopes as the amount of roots was simply not what I thought I had. 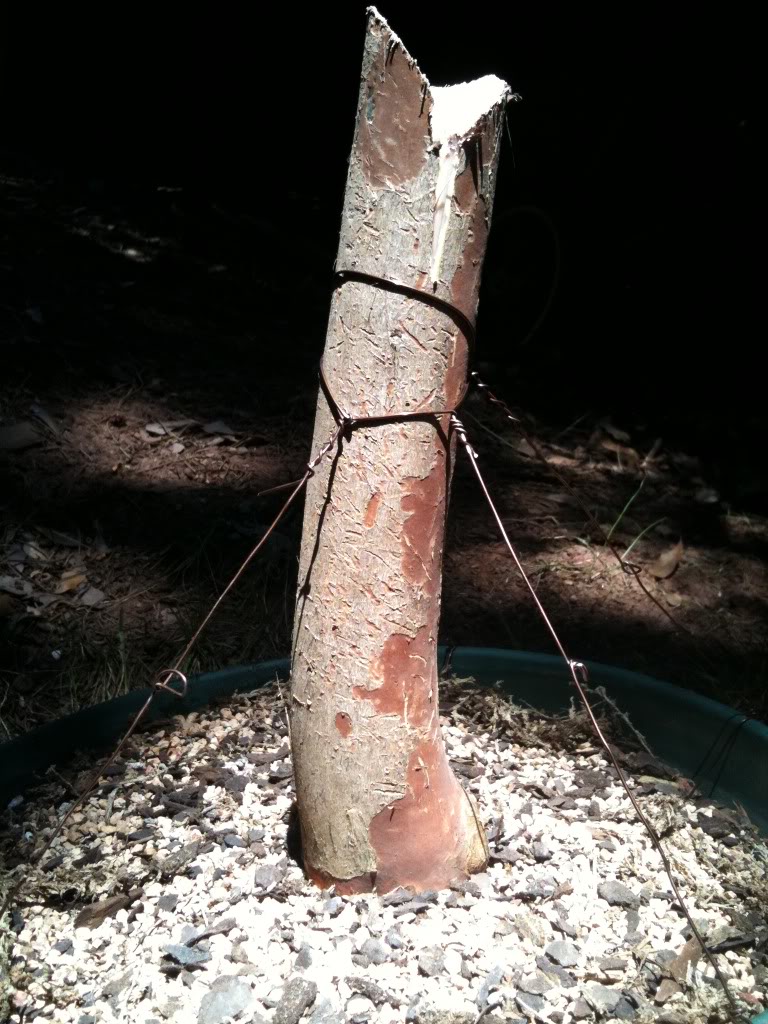 The second one I started after the leaves came out, as I actually did some homework after starting the other one. With #2 I used rooting hormone, spagnum moss with some bonsai soil mixed in, and wrapped a black plastic 4" container around it cup-style, and wrapped the whole thing in clear kitchen wrap. I got at least 4 times the amount of roots on this one, what factor do I attribute to this? 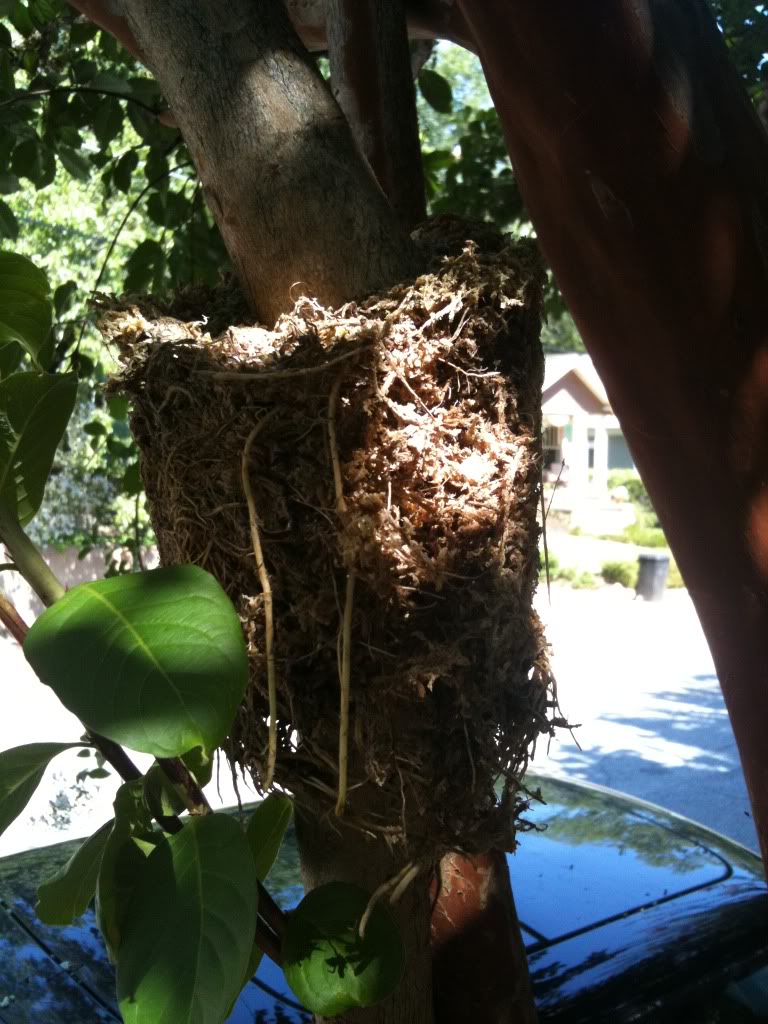 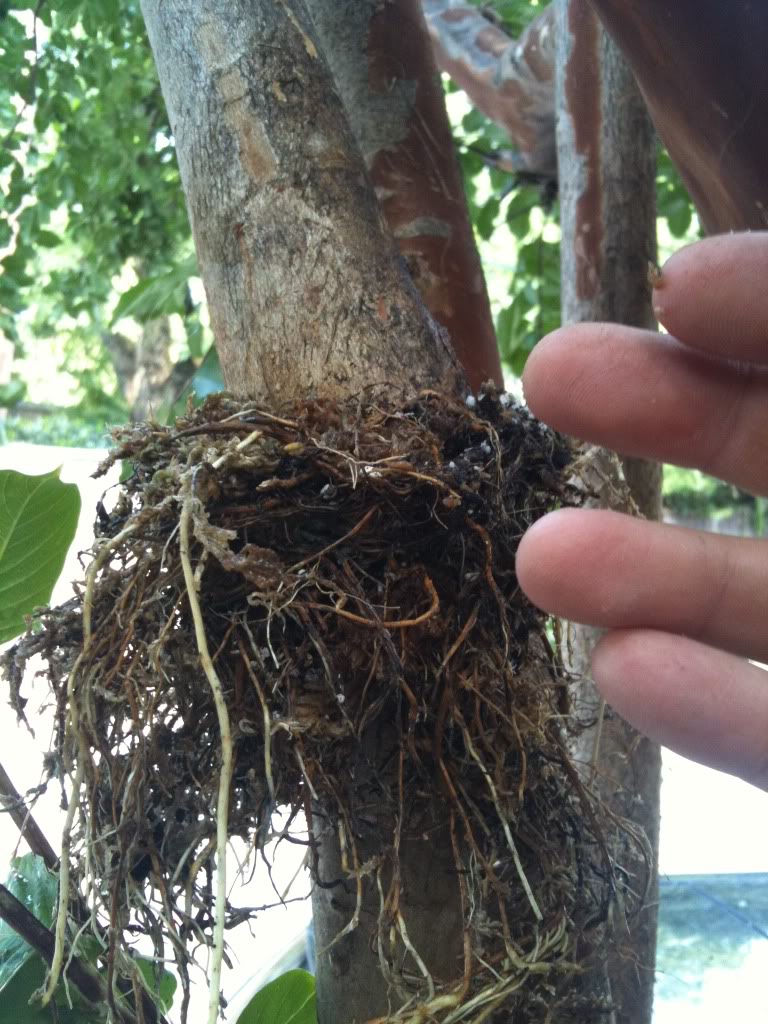 I cut number two with the better roots a little taller and at an angle for a hopefully more natural CM type tree. There is a little taper down there that the light makes hard to see. 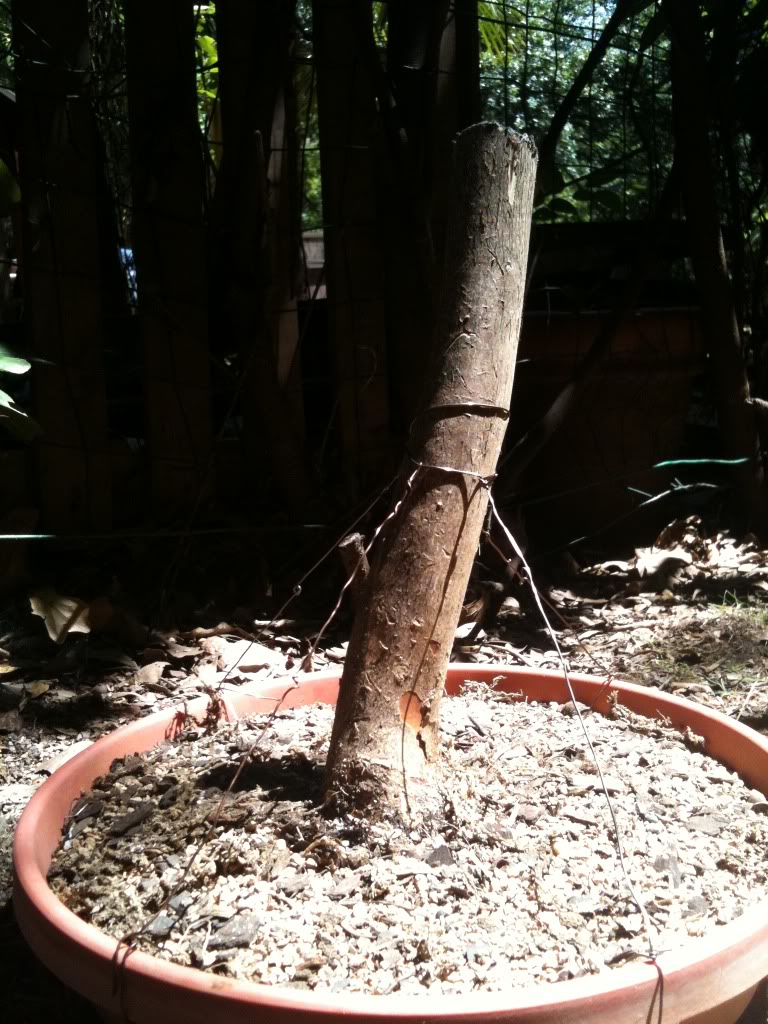 They have been planted in 60% Turface, 30% sifted Fafard soil mix, 10% chopped sphagnum, watered well and will live in the shade for 2 weeks so they can (hopefully) recover and start growing. I have pretty good hopes for number two, number one is gonna need some luck I think, so wish me that! 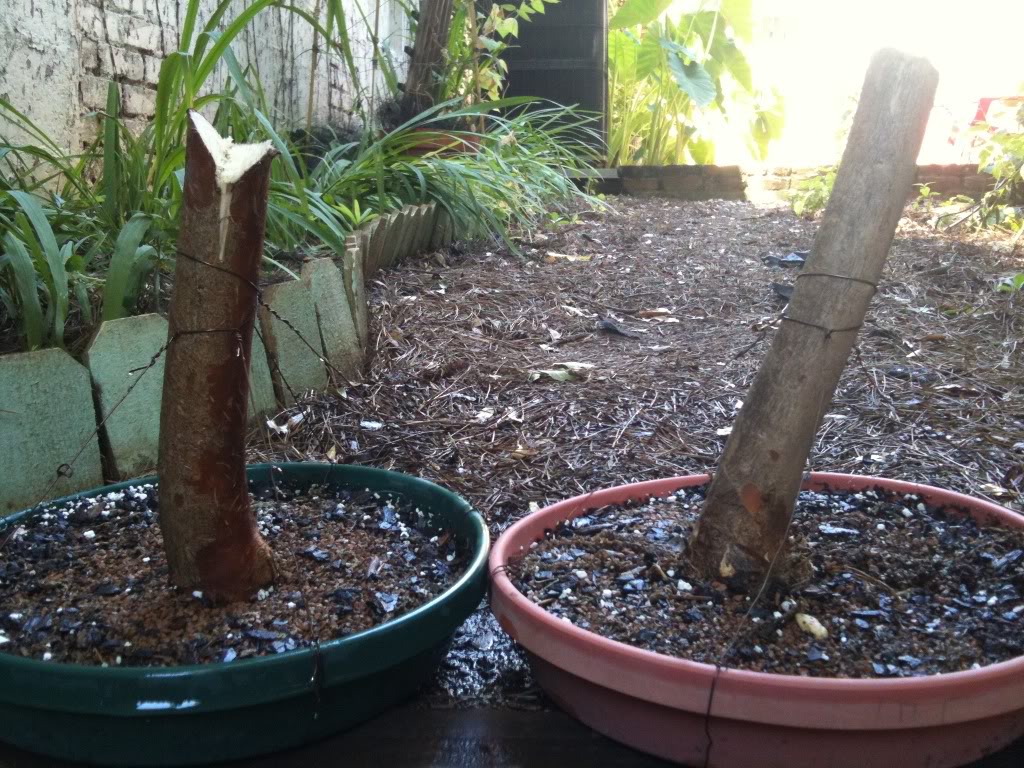 I have some other layers that aren't really producing much, 2 Japanese Maples and a Hawthorn. The Jap Maps have produced callouses bit no roots, why? The Hawthorn is still thriving on top, but no root action down below, any ides? They have all been going since spring.

I never considered airlayering crape myrtle since they are so easily collected. Congrats on your success.

I suspect that your fears with CM #1 will dwindle soon. These can be collected with pretty agressive chops to the roots (though I have discovered that there is a limit). If you have thick fleshy white roots at all, I'd suspect that it will probably make it.

As for the difference in amount of roots between CM#1 and CM#2, it is likely an issue of timing if I'm understanding correctly. Crapes tend to really excel in the heat and if #1 was done earlier (hence cooler) than #2, that could explain the difference. I doubt the difference in potting media is significant enough to mention ...at least for a vigorous tree like Crape. If anything, I've had more success w/ straight sphagnum than mixing it with anything.

I bought a 7 foot ornimental B Ficus last fall at an end of the year nursery sale. Got it 75% off original cost!!
Anyway, I bought it to air layer everything off of it. A total of 12 were done. I did the 4 different ways 3 at a time and I tried my best to keep the diameter of where the air layers were the same.
The 3 different methods were
1. Spaghnum moss wrapped with plastic
2. Pot around the branch stuffed with sphagnum moss
3. Pot around the branch filled with pumice. I used sphagnum moss on the bottom of the pot to prevent the pumice from falling through the drainage holes and used a top layer of moss to help keep moisture in.

The smallest layer was on a 1 inch branch the largest was 2 inches.

The outcome.
#1 I will probably never do again.
#2 had good results
#3 was by far the best. It yielded the most roots and I could have removed the layer about 2-3 weeks sooner then #2.
#3 does come with a down fall though. In the heat of the summer it MUST be watered every day!

All the layers survived, and recovery from fastest to slowest (still recovering) is 3,2,1.

I also took a 2 inch cutting that I split a + in the trunk and wedged pieces of chop stick to hold the wedge open to promote a better nebari. After 2 months it has started pushing new growth. I won't know what the roots look like till next year though.

Just thought I'd share with you my summer experiment.

Thanks for your reply, results duly noted... Here's an update of thee layers showing the growth they have put on. The second oic is from another layer I did just under these. It had enough time to put out a shoot that is almost 6 feet tall off the left trunk and the scar has done a good deal of healing so far... 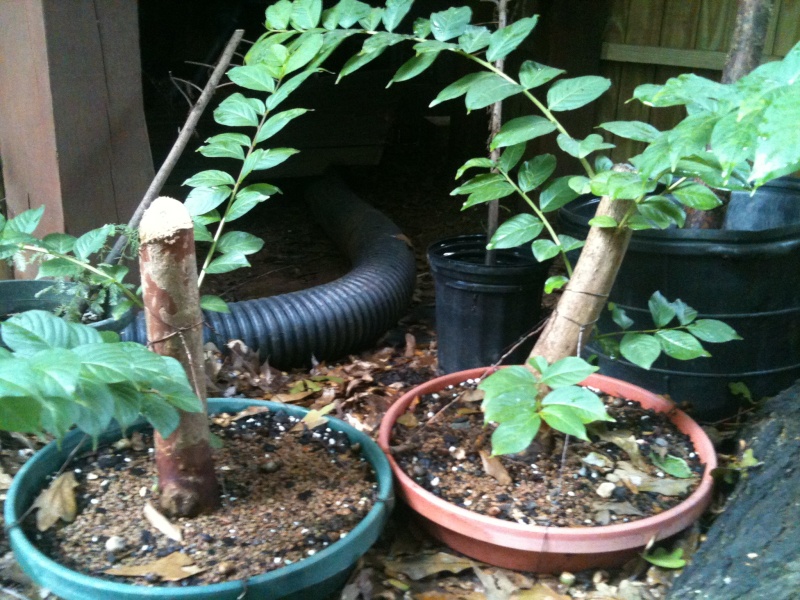 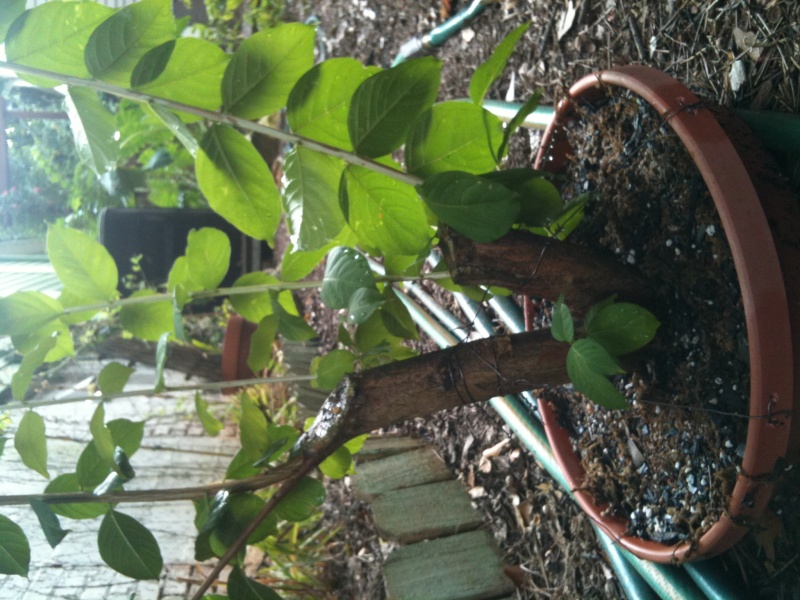 Sorry fot th esideways pic, thought I was past that...