Blauws Juniper A Work in Progress

Blauws Juniper A Work in Progress

I would like to share some pictures, which plot the development of my Blauws Juniper pre-bonsai from 2009 to the present.
I acquired this material in September 2009 from Willowbog Bonsai Nursery the home of the British Shohin Associations annual exhibition. The first picture shows the tree soon after I got it home. 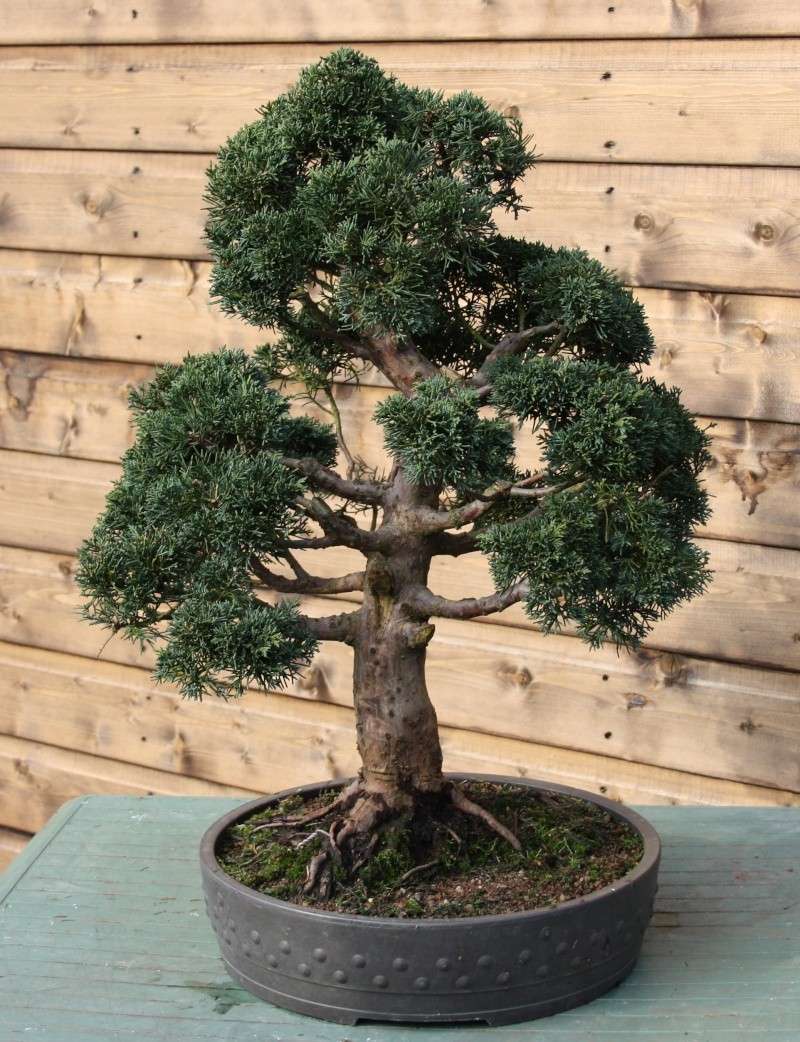 The tree’s height is 24 inches (61cm) from the top of the pot and the diameter of the trunk is about 3.5 inches (9cm) near the base. I had wanted a big juniper to add some quality to my ever increasing collection of sticks in pots for quite some time and I hoped that this might do the job. I didn’t do much to it in the first year other than improving the drainage in the pot to allow time for it to acclimatise in its new home.
In the summer of 2011 I took it to one of the monthly club meetings at Willowbog to seek some advice on how to proceed with its development. The result of this was that the back of the tree became the new front and the branches were reduced considerably as you can see in the second picture.

Over the next few weeks I worked on some jins and the beginning of a shari, thinned the foliage some more and gave the tree its first full wiring. the third picture shows the progress by late summer 2011.

I then left the tree for a full year until the summer of 2012 to allow time for recovery. In picture four you can see that it has recovered well and the foliage mass has increased dramatically. Encouraged by this I decided that it was time to do some more work on the development of the shari.

At this stage, although its growing well, I am not that happy with the silhouette and further branch removal is necessary to lighten the image but which branches should be chopped? I used photoshop to visualise a few different options and finally decided on the virtual outline shown in picture five. 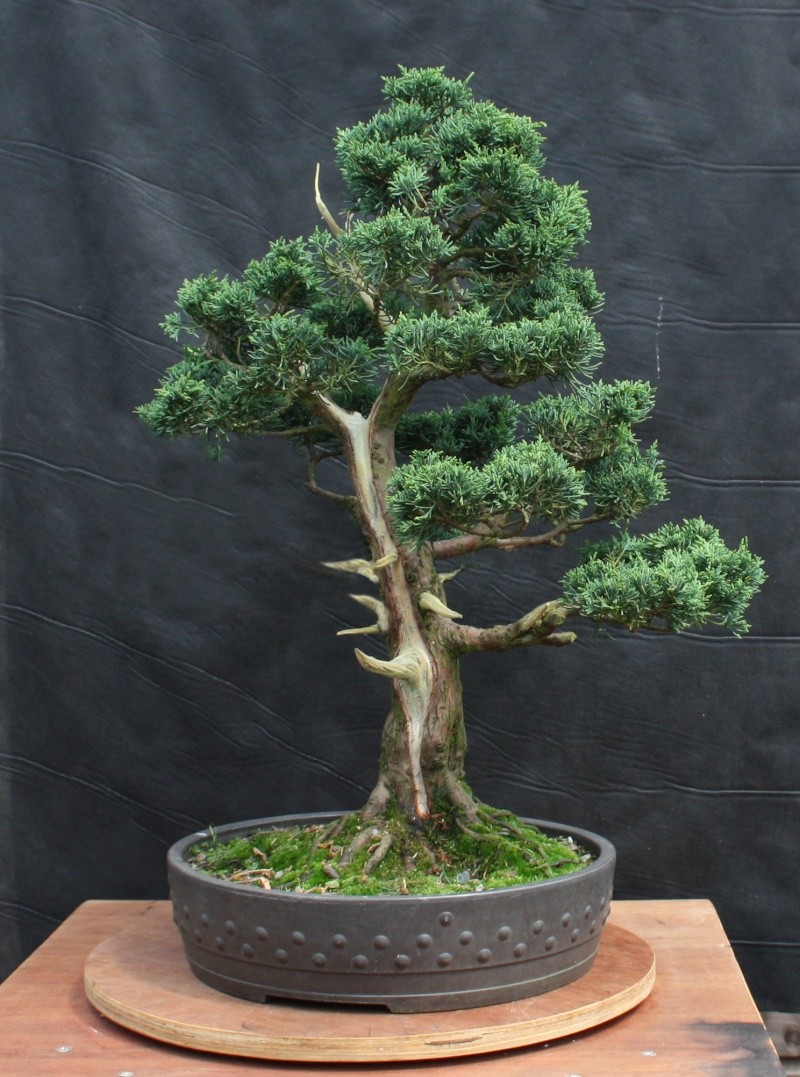 Decision made, the irreversible deed is done. The branch stubs are jinned and the tree is wired for a second time. Picture 6 shows the tree as it is today. 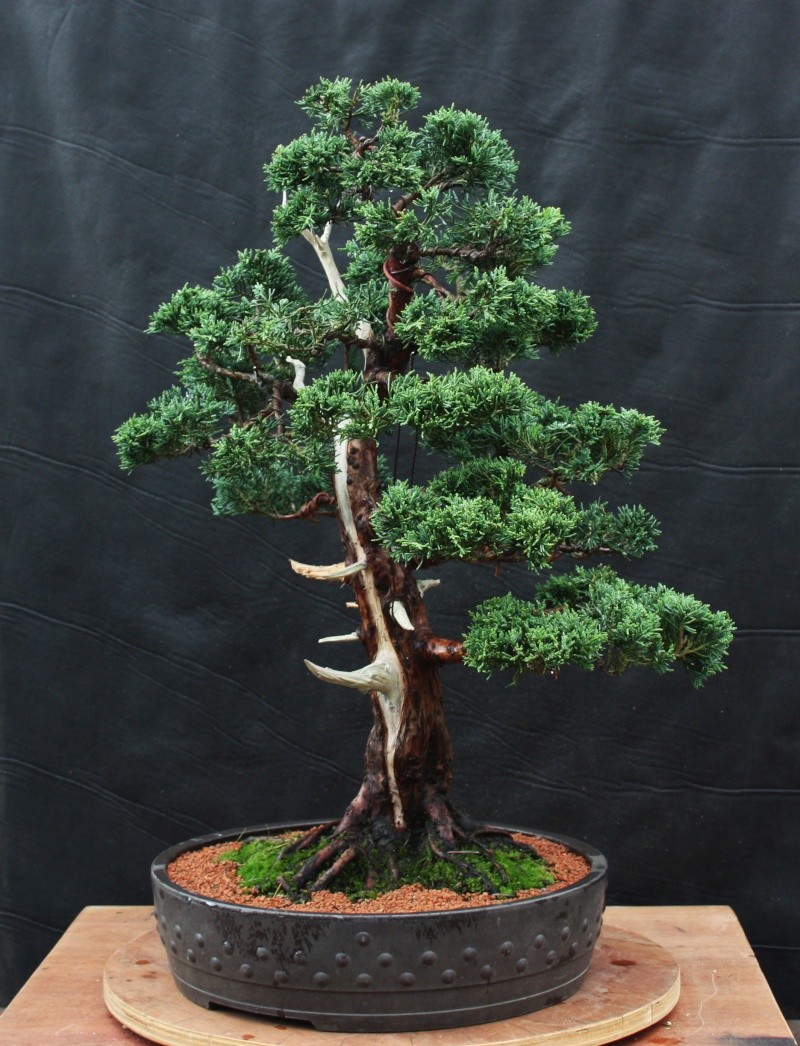 There is still much to do in the future to refine the foliage pads and develop and extend the deadwood but I think this year it has crossed that boundary from pre-bonsai to a pleasing image which will keep me occupied and absorbed for years to come.
I think next year I would like to get it out of this training pot and into something more suitable. I would appreciate any thoughts or ideas you may have on this. I hope you like it.

Like it a lot, Robert. Great progression sequence too.

I currently think you should stay round but shallower for the new pot, and possibly in a shade that picks out the bark colour. I was thinking somthing like this: 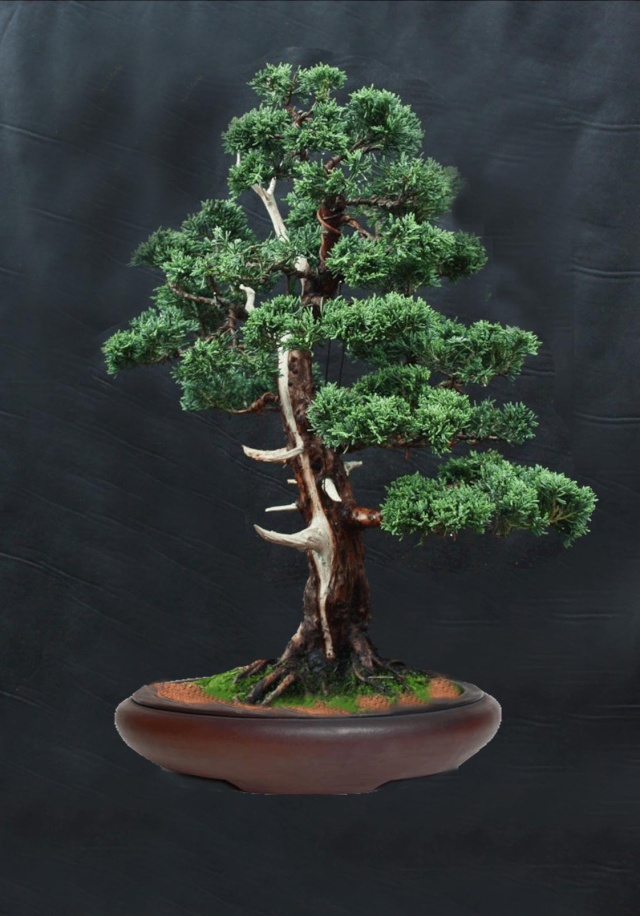 Just my opinion of course, and based on the fact that I love the pot and am contemplating something similar for one of my own junis.

Hello Robert,
I like the progression photos of your tree. I like the jins and shari too. I feel the left side of the tree is missing something; perhaps a branch. I'm curious in how you plan to develop the tree further. Perhaps you have a plan for the left side. I realize the photo is two dimensional and doesn't show depth. So I may be missing something.
Pretty tree!
Todd

We're is a good place in Scotland to see bonsai. My brother just moved there and I'm visiting soon. He still can't get over the fact that you guys get no sun..........

Jkd2572 wrote:We're is a good place in Scotland to see bonsai. My brother just moved there and I'm visiting soon. He still can't get over the fact that you guys get no sun..........

i guess you mean where in Scotland??

I think they get sun one day a month

Thanks for all the comments

Fiona,
Many thanks for taking the time to do the virtual, I love it. I notice that my post has been moved to Bonsai Progressions, ahm ded chuffed.

Todd,
I agree that the left hand side is a little weak at the moment this is because I have removed most of the branches from that side to create the jins. The movement I am striving for is forward and downward from top left to bottom right and I hope that in the coming year the top left part of the tree will fill out helping me to refine the image.

Jkd2572,
Its not a case of getting no sun at all, you just have to be lucky or unlucky to catch it when it is here. I went on holiday for a few days in early June, when I returned some of my trees were severely stressed by record breaking temperatures, when only a week earlier they were getting pounded by late frosts.
One of the best places to see bonsai in Scotland is at Wattston Bonsai on the outskirts of Glasgow especially if you time your visit to coincide with the monthly gatherings for Scottish enthusiasts.

for information on events.

Marcus,
The collection at Willowbog is a must see, for anyone visiting the north of the UK. Great gallery of Mr Greedy's trees on Bosaieejits blog

Jkd2572 wrote:Where is a good place in Scotland to see bonsai. My brother just moved there and I'm visiting soon. He still can't get over the fact that you guys get no sun..........

What a shame he moved this year which has been appalling weather. Like Robert, I too was away the one good week we had. Please reassure him that it isn't always this bad. On the plus side, you don't often have to worry about watering.

Whereabouts is your brother? If he's near me, he's/you are more than welcome to visit my humble garden. I'd be delighted to see you, and it's nothing to do with needing some help to erect the sides of a garage.

Thanks for all the input. He lives in Glasgow.

Lovely tree Robert, nice progression.
Your issue with the left side of the tree may be partly resolved if you considered a revised planting angle to take greater advantage of the trunk movement.
Just a thought: 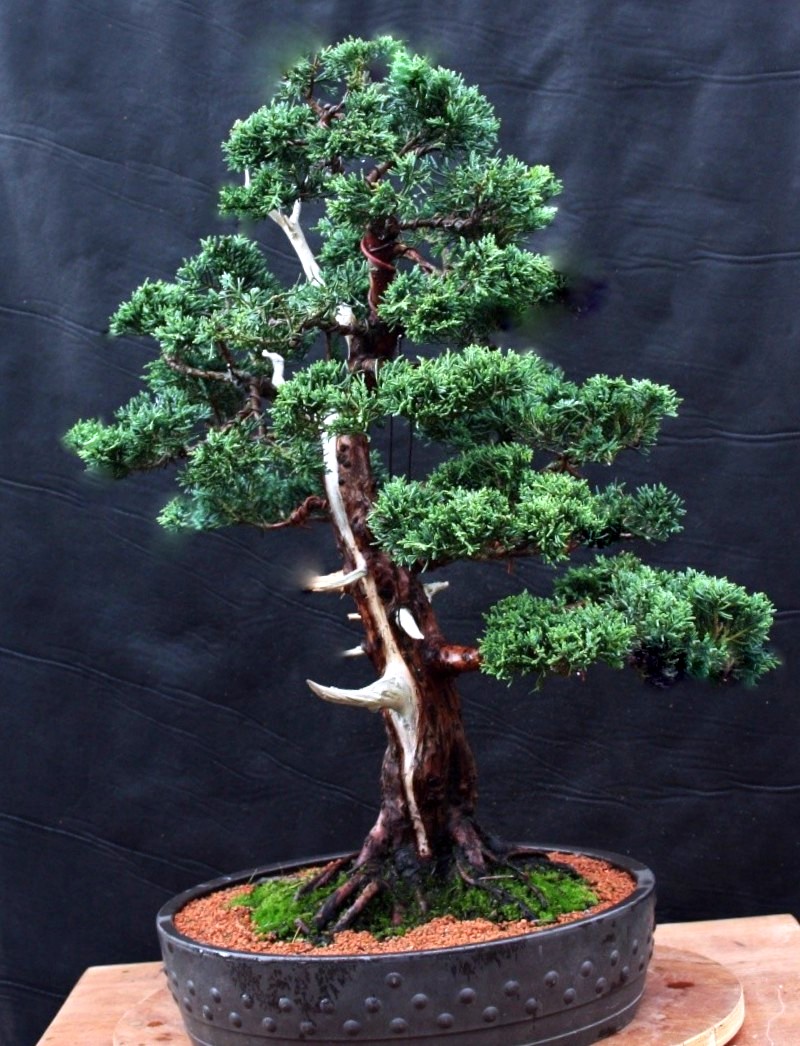 Hi Justin
Thanks for the comments. I hadn't thought about changing the planting angle but now that you have drawn my attention to it, you may be right. I will give it serious consideration