"not so tiny tots"

"not so tiny tots"

I would like to share my tiny stones, "less is more"
Scenic Landscape Mountain Range Views my favorite!
This size new for me, I have always collected much larger,
But these truly fit in one hand comfortable, suiseki by definition...

Stands will really be a challenge for me, I've got big hands.
Black, hard and lots of detail, lake, river, waterfall & a moon?
pictured bigger to show details, these are Yuha Desert Stones,
collected on a AisekiKai club field trip participated in recently,
as seen through the eyes of my friend Hung..

OK THEN! Sunip, here are some bigger shots! just for you my friend!, cheers...

This size new for me, I have always collected much larger,
But these truly fit in one hand comfortable, suiseki by definition.

as I understand it

Hi Chris,
I have read that Chinese scholar's rocks were originally small enough to carry in the sleeve of one's robe. and
Traditional suiseki are like wise small- most between 6 and 12 inches in length.
It is usually stated that suiseki can be held comfortably with one hand.
Beyond The Black Mountain, page 16, Jim Greaves...

Hi Stonener (Joseph)... Thanks for clarifying. Perhaps, I am a little confused regarding what you think as "tiny" suiseki & this thread seems to extend far beyond "that" range.

I've also read of Chinese scholar's rocks being held in one's sleeve (as small bamboo incense burners were once carried) though most we see displayed are large & sometimes extraordinarily large requiring placement on a floor rather than on a desk. In Chinese scholars sleeves were sometimes sizable objects. Bamboo censers carried in sleeves approached 8 inches
in length-- size would be less a distinction than weight for stones carried in sleeves. The descriptions I've read of "stones pulled from sleeves" were for effect on a viewer enchanted by the miniature scene; I think the description largely poetic license as desciptions were applied to yanshan ("ink mountains") which could be sizable, but you should judge for yourself.

At an Arts in Asia week event; Kemin Hu introduced me to Ian Wilson-- one of the world's foremost collectors of scholars rocks. Later, he shared that he had just purchased two scholars rocks. He drew out two small stones ~2-3"/50-75 mm. in length & carefully mounted to display vertically. I imagine them displayed alongside similarly contoured stones as expressions of more concentrated qi (spirit/"breath" of the Universe) energy.

In relatively early American publishing on suiseki, a California Aiseki Kai founder wrote an article for Golden State Bonsai
Federation noting that early Japanese suiseki used for tea ceremony were so small they could be held in the palm of one hand. I assumed it correct at the time; Jim Greaves (California Aiseki Kai) would be familiar with this article . Collecting tea ceremony books from Japan, I am less convinced. There is much information about suiseki published and repeated.

In Japanese museums, early stones used in tea ceremony and included among important suiseki are categorized as bonseki. In a 1980 exhibition on the "Art of the Tea Ceremony" at Tokyo National Museum, the only stone shown was Suenomatsuyama "Eternal Pine Mountain" and it is noted as 24.7 cm (~10" in length) while the saharibon
on which it sits is noted as 40 cm. in diameter-- it looks like the correct proportion. Oddly, this stone is noted as 16 cm. in length in several suiseki books including Denshoseki (Aisekikai publication,1988), An Introduction to Suiseki (Matsuura, 2010) and the extraordinary Meihin Suiseki Taikan (Matsuura & K. Yoshimura, 1988). Other stones I've noted in a Daimyo Tea exhibition book (early stones!) were ~10" to 12" (25 to 35 cm.) in length. That is not palm size or even
one-hand size.

Matsuura has suggested the typical landscape suiseki is 8" in length fitting a 12" suiban. Obviously there are more exceptions than actual 8" suiseki. In a Keido (alcove display) lesson by Uhaku Sudo in Japan, I was also told a particular stone of approximately 8" length & 5" height was the perfect size in a display where tea was served. For modern exhibitions-- especially where viewers are standing and, perhaps, not looking so carefully as a viewer stooped in seiza position on tatami, a larger stone is easier surveyed. There are exhibits where viewers squat on tatami mats in Japan, but they are not exclusive. 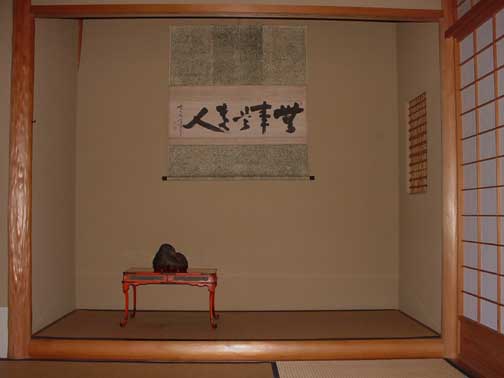 Sunip you are so right it hurts!...

yes there is much smaller stones as you have shown,
Thank You for sharing your gift stones, how very special!

"my problem" was that until I saw Hung's, I never noticed them.
never really paid attention to under 8", so for me to take notice,
and then find some, in or as Hung's style was exciting...

Chris you are a wealth of information, which I devourer,
I feed on your words of reference & example.
your always on target with the facts...

My Friend Hung! best for last, it is your eye!
that opened mine, to mountains, I see then better now.
before were not my type, see here really tinier... 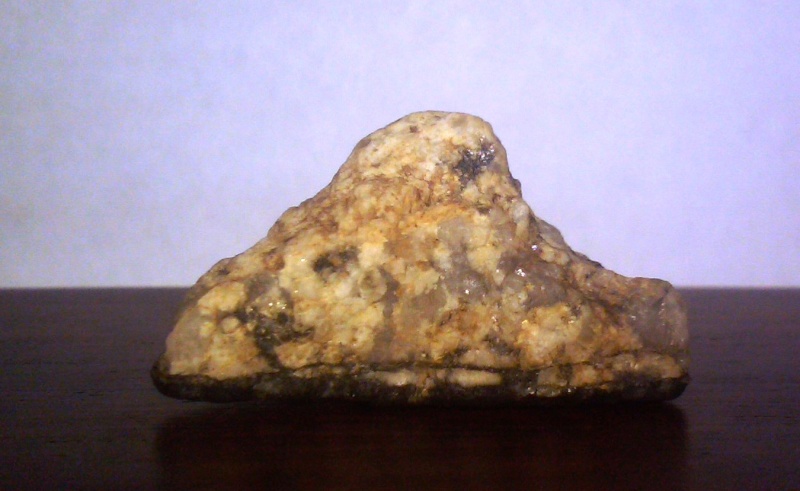 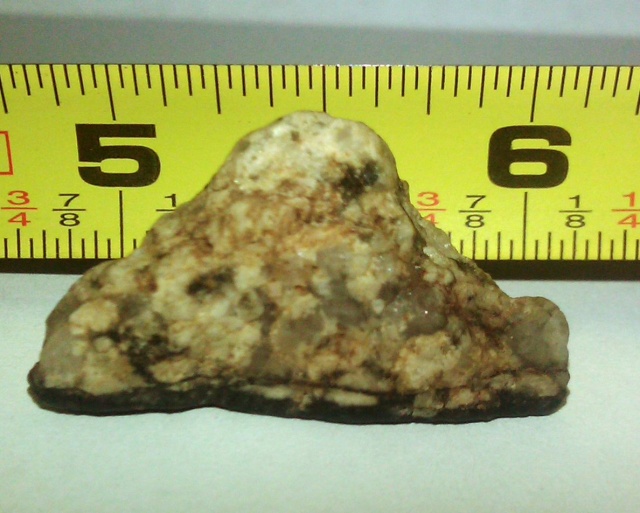 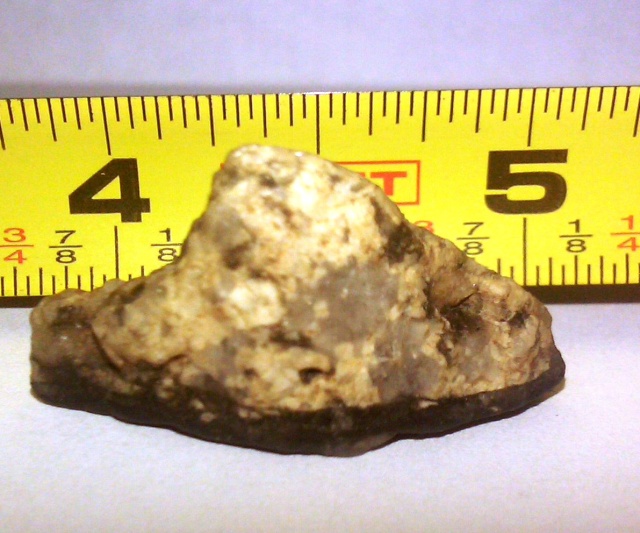 Hello Stonener,
Do is see a seat or is that a natural layer of the stone??
Sunip

there is a term used for stones that have this layer,
most time in white, seen as waves for islands or clouds at foothills of mountains....

It also might refer to a type of stone, not sure...

Hello Stonener ,
Yes , It is a natural layer of the stone and this is a type stone natural ( white is silicate material and black is another material ) , everybody called it is " tiny stone " ???
I also have a natural stone same same material stone of you : 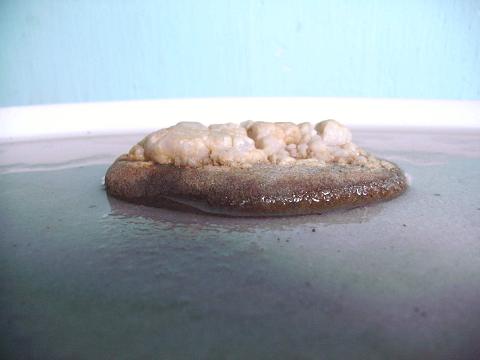 Sup? Hung!
I can feel the cold wind on my face!
What a beautiful winter landscape scene!
would go great with a deciduous Shohin,
as a winter display...

Will you be making a daiza?
does this stone have a naturally flat bottom?
what does it look like outside the sand?
Can we see the back?
best old mans carrying size, as for me,
have learned very important...

New tiny colour Stone for you ... 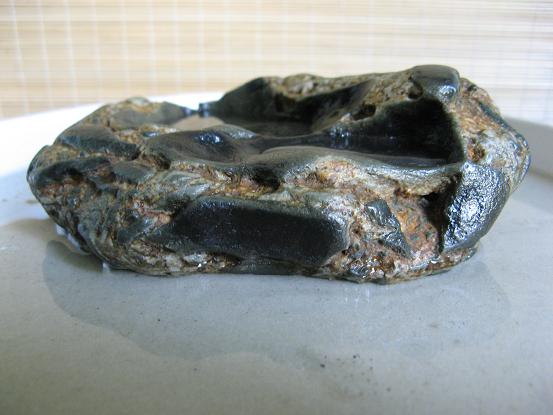 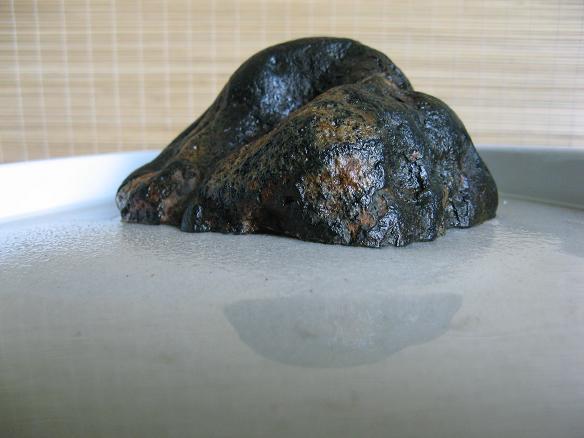 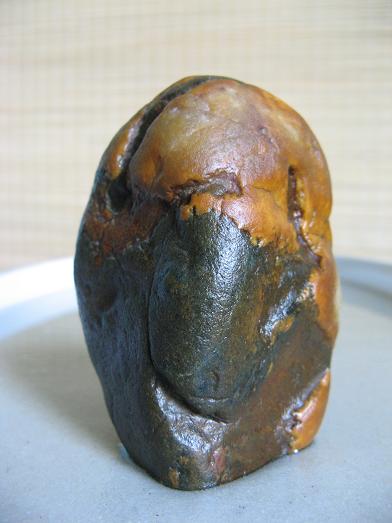 How feeling of You about its ?
Thank you very much your comment sharing ...
Sincerely ,
Hưng - Trần .

Hey Hung!
this last stone looks to me like a Africa Warrior's Mask!
Beautifully contrasting colors, nice smooth Scarface
looks like some guy lost his head...

maybe ask Andre what he see's

it is a very nice stone indeed.
Jag you probably mean an African ceremonial mask.... and no, I cant see it. I see a smily face.....so the stone becomes to happy to be a mask. Masks normally were terrifying...
but that is just me.

Hello Stonener ,
Andre Beaurain ,
and my Friends - Members IBC Forum ,
Oh Yes ! Masks normally were terrifying ... But I see a smily face , do the Stone becomes to happy .
Thanks sharing of you and of Mr. Stonener - My Friend .
Sincerely ,
Hưng - Trần .

how I see it

OK this is what comes to mind,
not so frightening, quite powerful warrior 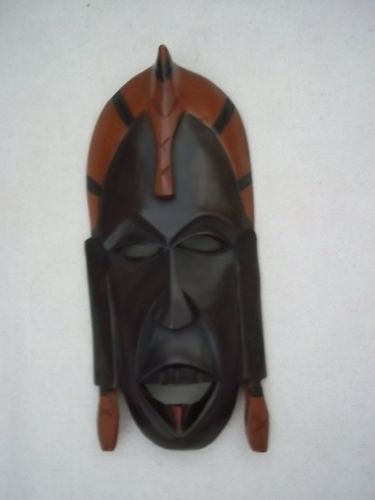 maybe even a groom, ready to choose a bride...

Stoner ,
if you put that on your face.... you Will be terrifying.. hi hihihihihhih hahhaaa

real challenging for me "SAHARA" 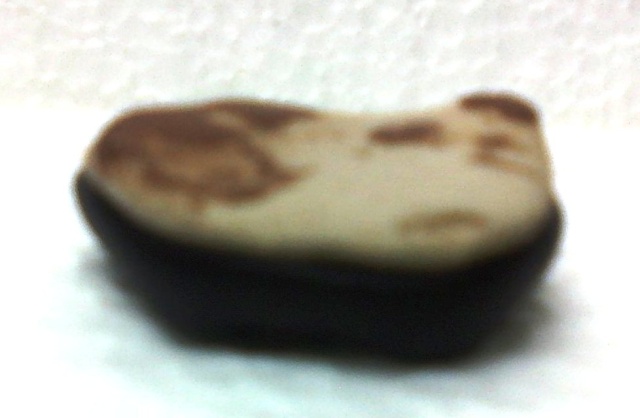 you'll have to do better Jag.

quickly get something to eat

Ya Andre!
My cell phone was having a low blood sugar,
and having trouble focusing...

But we feel better now, no second chance,
stone and was daiza re-gifted...

My Niece who I dearly love! at her birthday dinner with I and my wife,
took a small stone out of her coin purse and handed it to me.
She said " here Uncle for your Anniversary!, she was born on our wedding day.
Take a look! she's been listening to my stone story!, I have noticed... 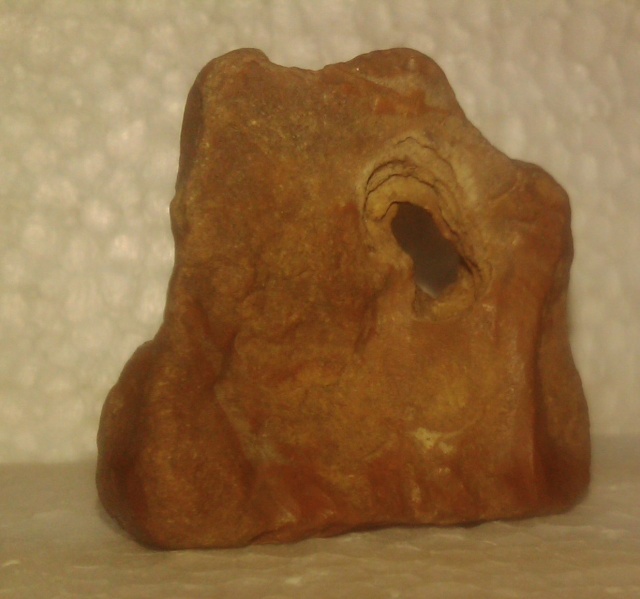