Although not a “super tree” from a “big shooter”,

, I believe this shows that it is possible to produce something satisfying at the hobbyist level by taking a few risks and making what seemed at the time to be “big decisions” in the process.

This new forum also affords an opportunity to consolidate scattered posts about this tree on this and other forums over the last few years.

This tree was purchased in Dorset in Jan 2005 iirc as approx 10-year-old, field grown stock for GBP 125. 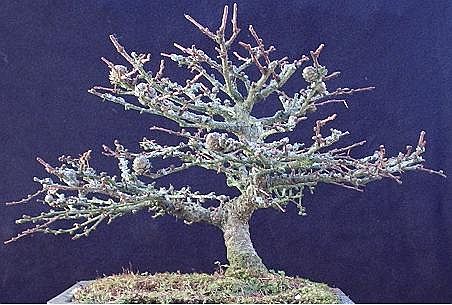 There was evidence of at least 3 previous trunk chops having been undertaken by the grower to get the tree to this stage. ( red dots on pic below) 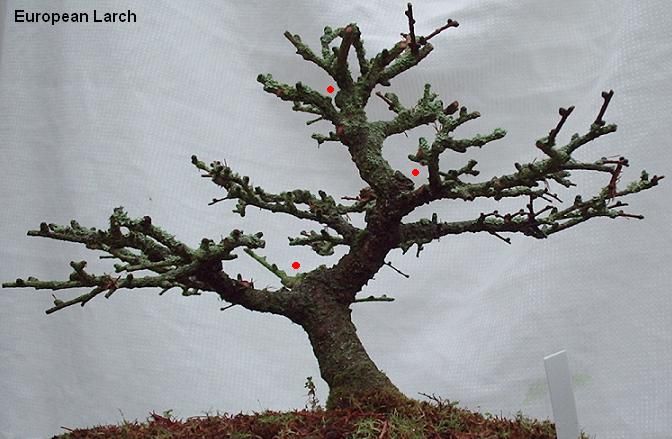 After a bit of work, the pic below is an early attempt at some sort of artistic display in March 2005. 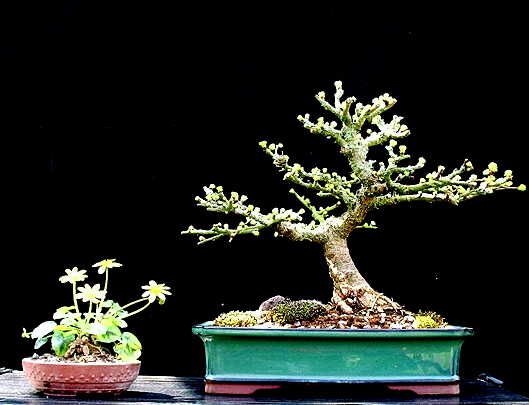 By the end of 2005 I had posted this on the www and was getting lots of advice from posters - Harry Harrington in particular. At the end of 2005- realising that the tree needed something radical - I did a major trunk chop and wired up a back branch as a new leader - removing the top half of the tree in the process. 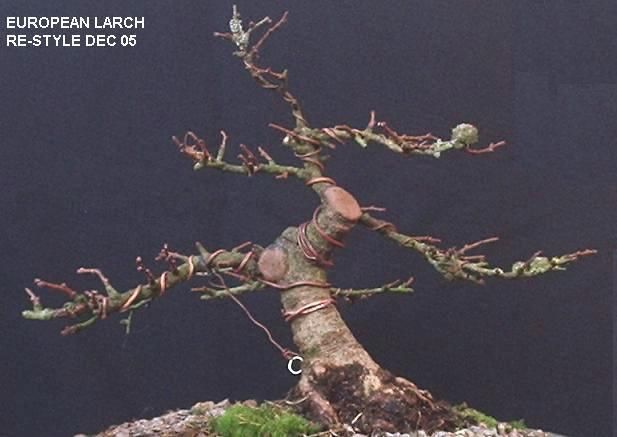 Two years later (Dec 2007) I had reduced the tree to a few basic elements (less is more?) and had found a more suitable pot at the Wessex Show.

However, I didn’t like the angle of the 1st left branch (pic on the left below), so notched it at the top where is joins the trunk and wired it down to improve the angle (pic on the right below). The gap was filled with a Vaseline /plasticine mix and has grown over now. 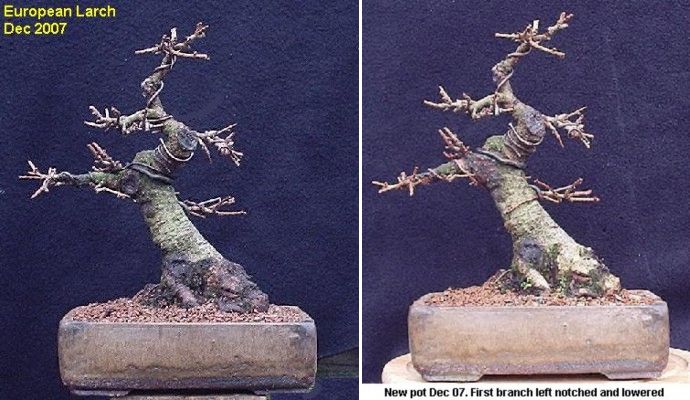 The tree is still more or less like the pic below as of today. This pic was entered into a www competition last year but didn’t win anything.

However, my wife displays it proudly on top of Hissing Sid’s vivarium which is good enough for me. 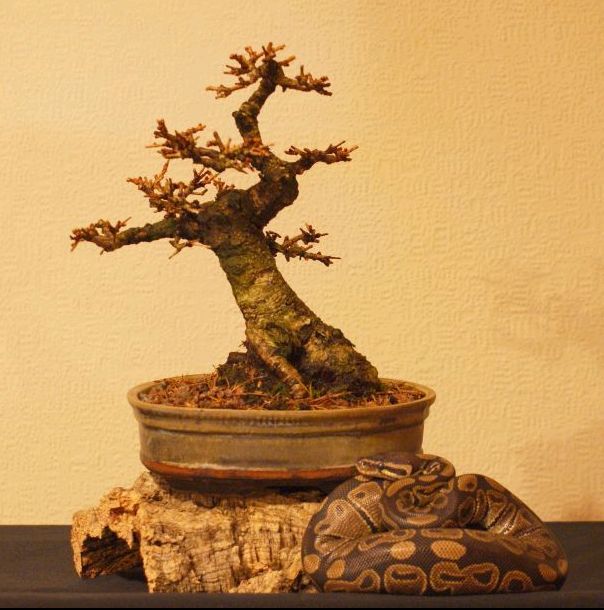 I will try and add an up to date pic in new foliage if it ever stops raining.

Thanks, Tim. Very much what (and who) this new forum is for. We said it would be full of threads from which people can learn and/or be inspired, and this has happened in that you have given me a great style idea for a lil tree of my own.


Think I'll forego the snake though.

Glad to see that Sid is no longer "satanic"

There's more where this came from if you want

Nice Tree and that looks to be a nice cinnamon pastel.Good progression.

Thanks again Fiona and also Seth.

As I think WillB pointed out last year, there is further potential to chop this tree again if the rather bare apex gets out of hand. Have also got 3 more larch coming on - 2 ex Chris Thomas and one garden centre reject grown on by myself over the last 5-6 years.

My wife's the "snake charmer".

Sid isn't a morph afaik. Perhaps the sepia toned pic disguises that he is bog standard Royal colour. We have now inherited another temporarily from the youngest son as pythons and Jack Russels are not very compatible in a small flat.

Good thing I'm used to snakes - having been brought up on the Niagara escarpment in Ontario which is garter snake heaven.

The neighbours' kids love 'em but their parents are absolutely terrified.

However, my wife displays it proudly on top of Hissing Sid’s vivarium which is good enough for me.

I will try and add an up to date pic in new foliage if it ever stops raining.


A what a nice picture of your tree and your pet Python regius! Brings me back to my teen years, when my bed room was full of snakes and lizards. I had two Python regius for a very long time! The small one of the two was named Pinky and the large one, that lived with me for more than 12 years, was named Pietje, after the Dutch pronunciation of Python :Pieton!
I do remember a particularly cold winter when they both slept under the blankets in bed with me to keep them warm. They scared the living day light out of my girlfriend, when early one morning she crawled tired into bed, after a night of hard work!

If I remember correctly, we did not stay together much longer after that incident! I dont know why she was so scared? These two lovely "John Player Special" colored Pythons, were so much smaller than some of the other giant constrictor Pythons and Boa's that I had at that time!

And then I dont even mansion the spitting Cobra's and Spiders I kept in the attic!

Is that moss growing on your tree? If so, why?

The debris on the surface of the pot is old needles if that's what you're referring to.

There may be the odd spot of moss at the base of the tree but this is an old pic.

A bit of moss on the soil surface can be aestheically pleasing and is often added before display as you may know, but too much can prevent water and nutrient penetration.

I let moss grow up the trunk of an Acer Arakawa (Rough Bark Maple) a few years back and when I removed it, a lot of the mature bark came with it. Will take several years to re-grow.

Thanks for the clarification. Glad its not moss on the trunk!

I love your snake, great accent! The tree goes well with it!

I really loved this tree, in order to see it's real color I've change the color temperature, so it looks more natural now, what do you think? 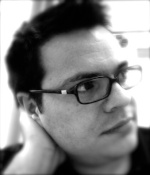 The pic was actually taken in low light deliberately for a competition and I quite liked the sepia-tone but I DO like it "au naturale" as well.

Good old PShop or whatever eh!

it would be nice to see some needles in this larch.

It turns into a horrible fluff monster with needles - in spite of all the plucking and pinching I can muster.

See this thread below

There is a very small window in early spring when this tree would be showable.