I'm hoping someone here might have dealt with Marc Torppa at the Growing Grounds. If so, could you please tell me about your experiences with him? Feel free to share either here or by PM. 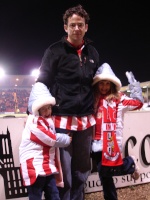 I like looking through his "Squat Pot Stumps" section on the website. His prices are usually out of my range; I wonder if he is getting the prices he is asking for. The pictures look nice but don't look good enough for me to want to buy his trees - too expensive.
Todd

I feel that I must post a warning here, so other people do not run into the same problems that I foolishly did.

I would recommend staying far, FAR away from Marc Torppa at the Growing Grounds. He was pleasant enough as we were discussing a few trees I was considering buying, although I detected a strong smell of b/s from the beginning. I decided to buy a wildly overpriced tree (that he also was misrepresenting), just because I had been looking for something like the tree he had. Big mistake.

Once my check arrived, it was cashed immediately...and then he went completely AWOL--well, nearly (see below). I now sit here nearly a month after he cashed my check with no tree, no expectation that I ever will receive my tree, no response to any of my email messages first asking then demanding to know what was going on, and no other way to contact him.

If you think that I might just be a difficult person, I would strongly encourage you to read this link on the Bonsainut forum: http://bonsainut.com/forums/showthread.php?6212-Arakawa-woes%28Thanks-UPS%29&highlight=torpa .

Unfortunately, when I tried to find reviews or commentary about him, I didn't find this thread--because they misspelled his name in it as Torpa rather than Torppa. After reading all of that, it sounds like I probably should expect to find my tree and/or its pot broken if it ever arrives, on top of all of the other trouble.

So, just to lay out various parts of my experience in one concise list:

* The only thing that happened smoothly and quickly in the whole experience was when he cashed my check, nearly four weeks ago.
* He stopped answering email messages after he received my check.
* Although he did ignore all of my messages (which sounds like standard practice, judging from the commentary on the bonsainut thread), he did send one random message saying he would ship my tree last Wednesday and would send a tracking number - that never happened.
* I've received emails from at least 2 different addresses for him, maybe more. My guess would be that he is doing this so he can claim that someone must have used an incorrect address while trying to contact him or some other nonsense.
* He doesn't accept credit cards or PayPal - which is just annoying and also makes it very difficult to dispute payment.
* I couldn't find one review for him online--as I said, I didn't see the bonsainut thread, unfortunately. This should have been a warning sign, but I ignored it.
* I only found one other mention of him on any bonsai forum, and it was unclear if the person who mentioned him had ever dealt with him. Another warning sign.
* He has no phone number listed in his contact information; I found two phone numbers for him online, and both have been disconnected.
* I found a yellow pages listing for his company online, and it listed the business as CLOSED.

So, until the bonsainut thread confirmed that he existed at all, I was nearly certain that this was all a big scam. Well, it is kind of a big scam, in my experience, but at least he and some trees do exist.

I repeat: I RECOMMEND THAT YOU AVOID MARC TORPPA / MARC TORPA / MARK TORPPA / MARK TORPA @ THE GROWING GROUNDS. Sorry for the multiple spellings, but I am trying to ensure that the next person who searches for a review online will find this one, no matter how they spell his name.

Thank you for posting the warning Chris!

Is it too late to put a stop payment on that check? Could you work with your bank and report the transaction as fraudulent?

There is another thread on Bonsai nut that seems to have all positive reviews of the growing grounds.
http://bonsainut.com/forums/showthread.php?4461-The-Growing-Grounds&highlight=growing+grounds

But now that I just perused the 8 pages of multiple horror stories that makes up the thread you listed boy am I glad I never gave this guy any money! Skip ahead and read his response to the guy who only wanted to visit his nursery (page 4)! WOW.

As I mentioned in my PM with you, its foolish to cheat a member of the both tightly knit and talkative bonsai community. Threads like this provide proof that obviously word gets around!

Thank you for your warning! I think vendor reviews both good and bad should be encouraged.
-Jay