i found this composition in a shop in Chengdu 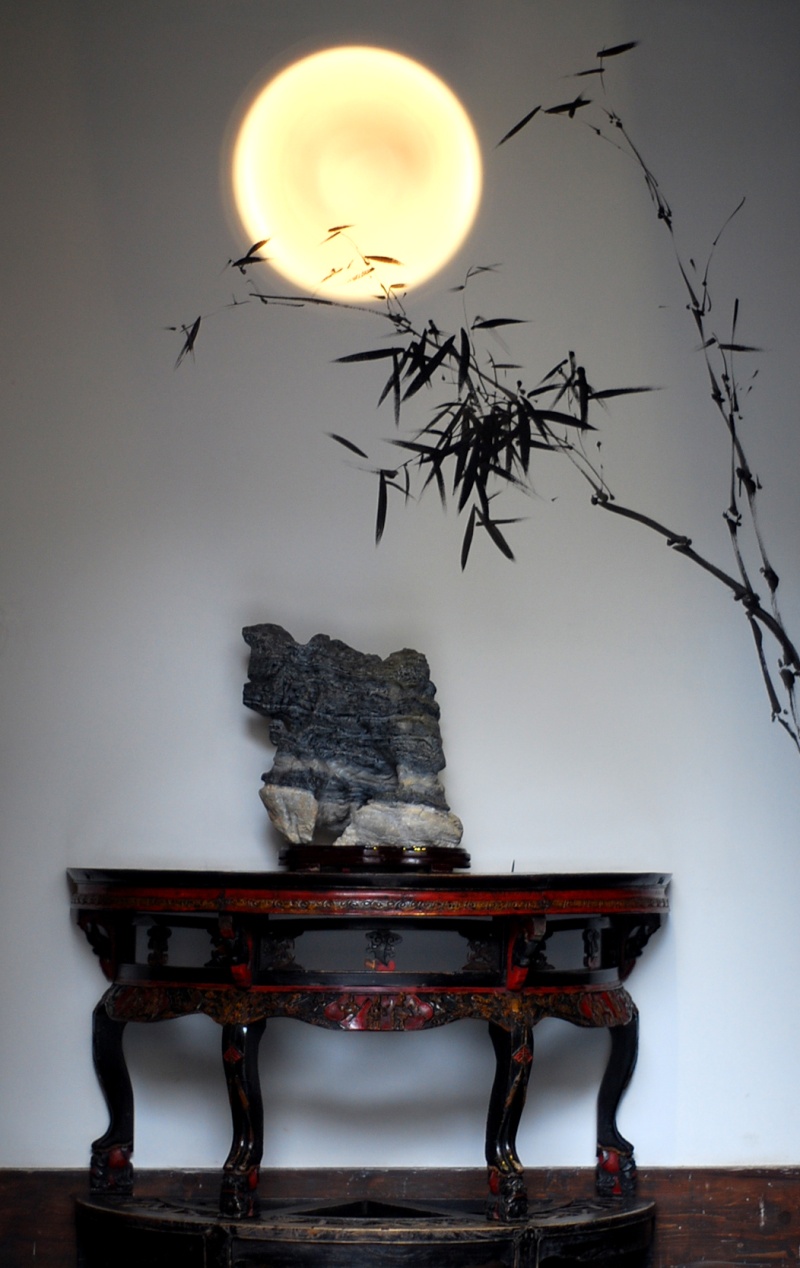 Thanks for showing us this composition, with 3 VERY nice elements...

Normaly is the bonsai or stone, the mainthing in a exhibit, and the stand and scroll should only support the stone or tree. This lovely stone is compleetely drowning.

If I Look "out of the box" and look at the composition as a 3 thing-, does this one also not work for me, as I then would want all element to have the same strenght.


If I Look "out of the box" and look at the composition as a 3 thing-, does this one also not work for me, as I then would want all element to have the same strenght.

thanks for your comment however i don't really understand your statement above...
also you have to understand the chinese way of thinking they are not as restricted and over rulled as the japanese. as you probably seen it in penjing it is much more juvenil and playfull rather than spartan and military like the japanese. they get a lot of inspirations from early paintings of amazing landscapes of wild china. of course beauty is always in the eyes of the beholder
regards
Attila

No doubt about that...The chinese people, are a lot more playfull. And they have every right to be so.

I deslike when you use the word "military", when talking about the refined taste of Japan.

There is still a big racial thing between the Chinese and Japanese. They have a long history of conflict from the attempted Mongol invasion of Japan in the 1300's to World War II.

I think it was the tomb of Sun Yat Sen we visited near Nanjing, part of the write up by the Chinese said something like, "reconstructed after it was destroyed by the Japanese barbarians during World War II."

I am sure there are similar undercurrents in Europe.

Hello,
When i try to reed the language,
i see the table as an image of the earth
and i see the stone as a rock image in the distance, far behínd the bamboo
who is sharp silhouetted by the full moonlight,
then i feel the immense correspondence between the two,
earth and moon.
Sunip

While each component are great...I agree with Yvonne, as a whole (for me) they didn't harmonize well.

I love that scroll! Can't say the same for the stand. Again, just my personal taste and opinion.

You are right, we had a war in europe many years ago. And I am sure everbody with some age remember it, and the little younger , who saw the pictures will not forgett too.

But we must move on...and I would very much deslike, if anybody would use the word military, when the taste and styling of bonsaiexhibits from this country was mentioned.

To me, is this plain bad behauvior, and give me the taste of racism, that does not belong in this international forum.

Bill...I hope to spend great days with you in China again next year

You are right, we had a war in europe many years ago. And I am sure everbody with some age remember it, and the little younger , who saw the pictures will not forgett too.

But we must move on...and I would very much deslike, if anybody would use the word military, when the taste and styling of bonsaiexhibits from this country was mentioned.

To me, is this plain bad behauvior, and give me the taste of racism, that does not belong in this international forum.

Bill...I hope to spend great days with you in China again next year

i think you did misundertsand my use of "military" in my message there is no reference to Japans and Chinas past, neither is a racist comment. I mean that japanese styling has too many rules and regulations. As you said you could call it refined. I used "military" to say as i am looking at the specific rules applied to each category if you break them then you are out and you cannot play in the peer group anymore unless you keep to these rules. Refind yes no doubt about it, but resitricted as well. it suits the japanese lifestyle however we are not japanese and dont live in Japan either. just my opinion
Attila

No problem. I just deliked the word military in the first place....It was Billy who gave the, in general information about wars, and I answered him back.

Rules are a very strick word...Let us call it advise...Japanese lovers of bonsai and suiseki, had spend years with quiet watching, and thoughts of displays, and found what they liked best, when showcasing an object Bonsai or stone in a tokoname....this is now called rules by western people...it cowers all the thoughts they had, but the word is hard and conclusive.

Theese advises is interpretated in the west in many ways...Often with the stands people have, and want to use, now they bought them. stands that were available...it is not a shame, but a also not a matter of refined taste.
in a few cases is the 3 elements like stands, scrolls and the bonsai or stone, are often just put together, because the owner liked each element they owned, and wanted to display them no matter what.
They can be quit nice, but not really spot-on.....
also does some people want to dispaly the bonsai, or stone exacly like they want to, according to the personal taste and temper, it can be massive....

In the homes, or in the exhibitions will they not be stopped...so I dont really see any rules being followed or enforced.

But then again...I live in Eorupe, and the main taste in exhibions I visit, is nice quiet and light.

When displays is showcased on IBC, are you asking for a reaction ( unless you say so )...this will you have from people who think it is worldclass what you created. Or people who dont like it, and say it...theese people will thereafter often be accused of only following the rules...could it be, it actully was theese peoples personal taste?.

Sorry my english is poor, but I hope it makes sense, or ask again

Please do not apologize for your English.

As to the "rules' when we were in Japan last fall we saw most/all of the rules broken. I suppose there are two or three kinds of shows in Japan and I know these types exist in the USA.
1. What we might call a "Juried" show, where a photo is submitted and trees/stones/displays chosen from the photos. The show at Disney's Epcot each spring is like this.

2. "Open Shows" where people are given space and allowed to put up a tree/trees, etc.

3. "Invitational’s" where certain people are invited to display.

4. "Paid" I don't know of any US shows like this but I know some in Japan are this way. I was told it cost the equivalent of $800 US dollars to display at the show in Kyoto we attended last fall. This was a minimum for one space. For that you got to put up just about whatever you wanted.

Also there is a lot of politics in bonsai shows.

Thanks for the information...I did not know all of it

This page have strayed a long way away from the photo it started up with...And I have some more to say about it...

I think the chinese person,who had this exact space to fill with a 3 element display....could have had this thougth..."people will walk slowely by here, enjoying the whole display among others, and only maybe stop for a shorter look at the stone".

The maintable he had was low, so he used a longleged stand, to bring up the stone....If you are a standing person will you see the table more from above, the stand will then lok smaller, and the stone ( the mainelement )bigger...

A photographer must pay attension to a situation like this, and think about the intensions of the display.

Attila made the mistake to bow dawn in hes knees when taking the photo. This way the table became big and prominet in the photo, and the collour off, compared to the more grayish collours of the stone, and the scroll.

With taking the photo from a low angle, did we miss out the whole view of the woodthing beneath the tables legs, it has a more grayish collour, it could have made brought the display together.
Also did we not see the collour of the surface of the stand, the stone is standing on...maybe it was more grayish, wich would have made the display first class.

My reaction to the photo of the display could have been a lot more diffrent if attension to details had been taken, as I like a nice chinese display a lot.

Hello Attila, Thank You for posting
Were these items for sale?
Beautiful table one I would love to own!
This shop must have had many interesting things,
Display seen as invitation to enter and find a treasure... 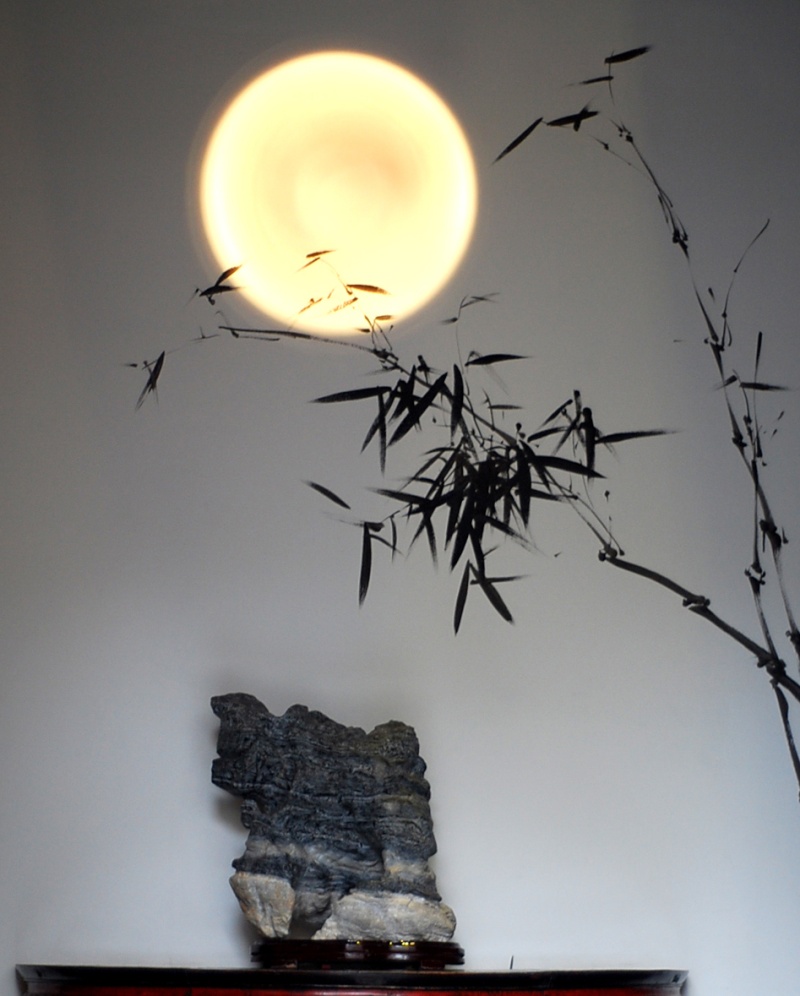 yes after a photo edited

Yes Attila as you say common store front displays,
are put together with what ever is available at the time.
When one items sells then replaced with anything else on hand.
Used as advertizement for shops beautiful merchandize...