Our club NIBS had Peter Snart of Willowbog Bonsai fame over to N.Ireland last November. After a night of late night wine drinking with him, chatting about the bonsai School with Marco Invernizzi at Willowbog, I slept on it and proposed that Peter could do something similar for us. Peter, as a student of Marco, has lots of valuable info to pass on to us and the same school format looked ideal.

We're isolated over here with very little in the way of access to outside guest speakers and bonsai suppliers. By combining both, we hoped to have Peter over 3 times each year. We decided to give it a go with visits in February, June and October this year. Any that know Peter, know he can talk

so a bonsai school, aimed at our big influx of new members over the last year, seemed like a perfect match up.

Our members have supported this well making it a viable option. Each of the weekends consists of a Saturday School Day and a Sunday workshop for 6 people. February's weekend was a great success for us and for Peter.

I've only just got around to sifting through some of the video that a member took at the school and decided that it might be an idea to add some of it to our You Tube channel. I have put 4 clips up covering Branch Structure, Pot selection, repotting and Nebari. These are just short segments of our day with Peter. They seem to have gone down well on another forum I use, so I thought I would share them here as well. I watch a lot of bonsai video online but most are just clips showing trees. These might appeal more to any beginners here on IBC. We have done this to promote friendship and learning within the bonsai community.

The video clips are basic and at times shakey. They are mostly unedited as Peter doesn't stop to draw breath. To start cutting bits out would have made them disjointed. There's a few comedy moments with Peter going off on a tangent and having a laugh with members, these have been left in for the craic value and are meant to be taken as such. I may even do a blooper/comedy reel later :-) Let me know what you think.

Really good stuff Ian. One question; how long do these clips take to upload?

Depends on your connection really. Uploading them onto Youtube can also depend on you tube as well. They take a while to process the clip checking for music track copyright stuff and creating a thumbnail cover. With my poor broadband connection each clip took about 60 minutes to get up there. One took a lot longer for some reason and one just flew up. I'm changing to fibre optic at the end of the year so about 5 minutes should do it then

The camerawork needs a bit more practice, but the educational content more than makes up for this.
_________________
“It is not the strongest of the species that survives, nor the most intelligent. It is the one that is the most adaptable to change.” - Charles Darwin.

To promote friendship and learning within the Bonsai Community!

Thank you NIBS, WILLOWBOG, Ian, Peter.... Thank you ALL!
I just watched all of the videos in one turn, one after the other.
So very instructive!
I just have to "clear" some points due to language but this is minor which can be met...

Yes, thanks to all concerned for the sharing of these enjoyable and educational videos. The section on root and nebari development was particularly interesting as it's not an area we hear about in as much detail as Peter gave.

Having spoken in public numerous times, I had to chuckle to myself as peter's carefully crafted narrative kept veering wildly off track, lol. I bet he spent hours writing up his notes until they flowed seamlessly from roots, through nebari, trunk and primary, secondary and tertiary branch formation.......only for it to go tits up before he got past the first paragraph, lol.

Mind you, as that's precisely how my brain works, I had no trouble at all following every word he said! 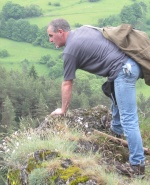 You think he made notes!!

He did make us handouts on all the topics covered. They are on our club website under the Bonsai Knowledge tab for everyone to use.

Thanks for all the kind comments folks. I'll make more of an effort with the video content in June's School. I'll have to stop Phil the cameraman zooming in on ear lopes and nasal hair

Part Five now on the You Tube Channel. This, and the next two are taken from the school workshop day, so are slight different from the previous ones. To aviod confusion anything that sounds like verbal abuse is actually banter/craic/good natured humour

That's it! Last one until the June School.