Christmas came early this year as one of our local bonsai clubs has a show and shop. One of the members was selling this pot and I decided to sell my soul to get it. So here you go. It is a Japanese pot and I am trying to find out a bit about its origin. It has a "chop" mark. Is this the correct name? Also, I have tried to ID the pottery/potter from some of the internet pot sites (specifically Tokoname), but with little joy. Is there a way to know which way is up on the signatures? 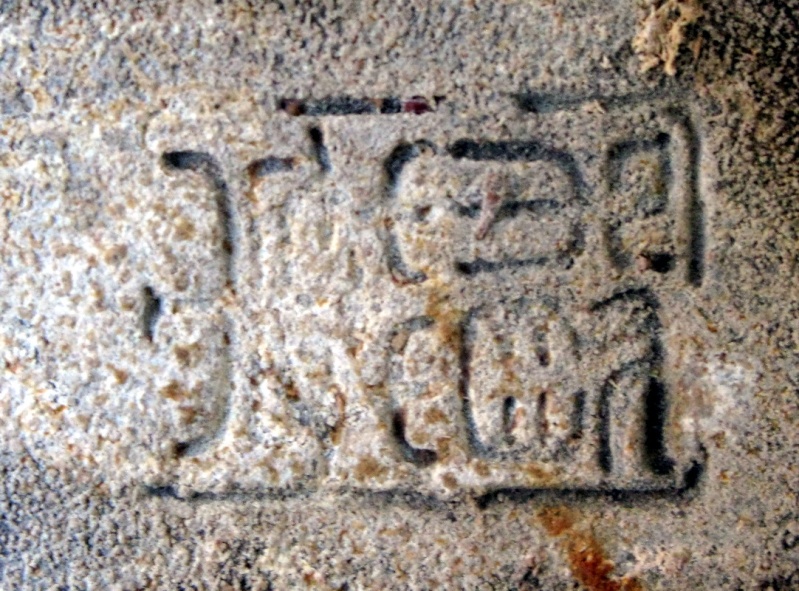 When I saw your pot my first thought was "Yamakou". I have one that is identical to yours - well, the top half anyway. Same lip, same clay, same color and finish, but with a different detail around the feet. The problem is that the "Yamakou" chop is nothing like yours, and I also can't find it. I have other, older pots that I know are Tokoname but can't find those chops too. It would be nice if we could send a picture to Tokoname and say "who and when, please?".

Anyway, if you turned your picture one click clockwise you'd see it correctly.

How do you know which side is up?

I am going to see if I can clean the chop up a bit. There seems to be a lot of limescale (I think) that obscures it. Any suggestions as to how to remove it without damaging the chop? My feeling is some sort of chemical soak, and as I am unlikely to use it for quite a while (I have no tree that fits it), the chemicals will have plenty of time to leach out.

I read somewhere that some of the Japanese manufacturers had pots made in China, and one of the AusBonsia guys mentioned that the chop looked Chinese. Could it be that this is the case?

Lots of food for thought!

Gosh Andrew, I don't know how to tell you how to "know". It comes from being around it long enough and recognizing aspects of the characters. That doesn't mean I can read or translate them - but the average Japanese can't either most of the time. Many chops and/or signatures I just recognize because they are common and distinctive, like "Yamaaki". Last year I showed an old pot I have to Ben Oki and he said "Wow, that's a really nice Tokoname pot!", which I already knew, but even he couldn't identify the maker from the very clean chop. That pot is in this forum somewhere.

I'd try a medium bristle bush to clean just the chop first. We have a product here, CLR, that does a good job of removing that limescale. Be careful, some chops are just faint and hard to read.

It's really hard to say if a chop "looks" Japanese or Chinese, but this doesn't look Chinese to me - too simple. And that clay and finish are classic Tokoname. Also, somewhere around here is a post with a pot I was asking about because I'd never seen another like it and could not find in any Tokoname catalog. I bought it in the mid '80's in California from a guy who imported nice Tokoname and Shigaraki pots from Japan. The chop is too muddy to read. We finally decided that it was made in China and sold through Tokoname, which is how it ended up in the USA. I don't think that any reputable potter would pass off Chinese pots as his own, but that's just my thinking.

Your pot is in the top right corner of page 5 in the "E" and "F" Tokoname catalogs. My pot that I compared it to in the middle bottom of page 2. The 2 pots are sitting next to each other on the bottom of page 3 in an old catalog with a green cover from the '80's. Both pots are gone from the newish "Y" calatog. Interesting.

You don't by any chance have electonic coppies of any of these catalogues do you? I am busy pulling the latest one from the Tokoname site now.

When I asked how you know, I was wondering if there was a standard position and orientation for the chop on the base of the pot. This particular one has what you say is the top (and I have no resaon to doubt you) closest to the edge of the pot.

Maybe surch the www for hanko/rakkan, this is how they are called.
Once there was a good (Dutch site called yamadori.nl) site for finding the rakkan but it isn't on the net anymore.

Will do - thanks Roald

RT34 wrote:Maybe surch the www for hanko/rakkan, this is how they are called.
Once there was a good (Dutch site called yamadori.nl) site for finding the rakkan but it isn't on the net anymore.

FYI: The Dutch website yamadori.nl is no longer available, but Maarten van der Hoeven from the Netherlands continued the work of Levon Arzooyan at http://bonsaipotplaza.com/

Not sure if this pot hanko is on the website, but it could help others...

RT34 wrote:Maybe surch the www for hanko/rakkan, this is how they are called.
Once there was a good (Dutch site called yamadori.nl) site for finding the rakkan but it isn't on the net anymore.

FYI: The Dutch website yamadori.nl is no longer available, but Maarten van der Hoeven from the Netherlands continued the work of Levon Arzooyan at http://bonsaipotplaza.com/

Not sure if this pot hanko is on the website, but it could help others...

Thanks for posting that site. I checked but didn't see it there.

Andrew, I don't have copies that you asked about. In that old catalog I also found my gray pot the Ben could not identify. In that catalog the pots are arranged more by shape and glazed/unglazed while the new catalogs group by potters. Ben will be back here in about a month and I'll show him our pots in the catalog and see if anything clicks this time. There's info above each picture, so there's hope.

I checked my pots and I have to say that most are stamped right smack in the middle between drain holes, or to the side of a center hole. A couple were along the edge like you mention, and the signed ones anything goes.

I went to the Tokoname website and clicked on "catalog" and found the 2009 "A" catalog. Seems like you used to be able to view older catalogs, but maybe it was just to buy them.

Thanks fot the info Hans, I first checked bonsaicafe but didn't found the solution there.

Rectangular chops are read vertically. I copied your picture and have looked at it both ways and my assumption may be wrong, but it's just too hard to read. I need to see a clearer picture. The old Tokoname catalog I mentioned has a list of potters and their chops with their names, but I need more detail. The pot is clearly in the catalog so the chop should be too.

This from the horse's mouth:

The pot was made about 10 years ago.
The maker name is "Yamakou".

I guess he knows what he is talking about.

Andrew Legg wrote:I guess he knows what he is talking about.

Glad you got that info, but you forgot to mention that I was right all along.

Anyway, I'd still like to see a clear picture of your chop when you get a chance so I can add it to my list. I wonder when and why the chop changed. Ask your friend how long they had that pot, that may tell us something about the chop. I bought mine in 1983 from someone who'd bought it in Japan a few years before that. 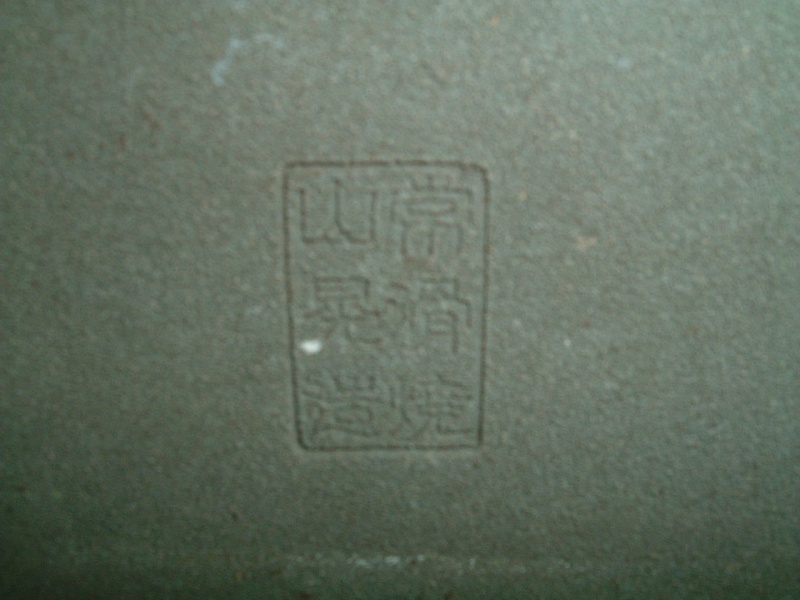 I have finally gotten round to cleaning up the chop on this pot. Bit of swimming pool acid did the trick. Here is the image, and please feel free to use it or file it as you wish. 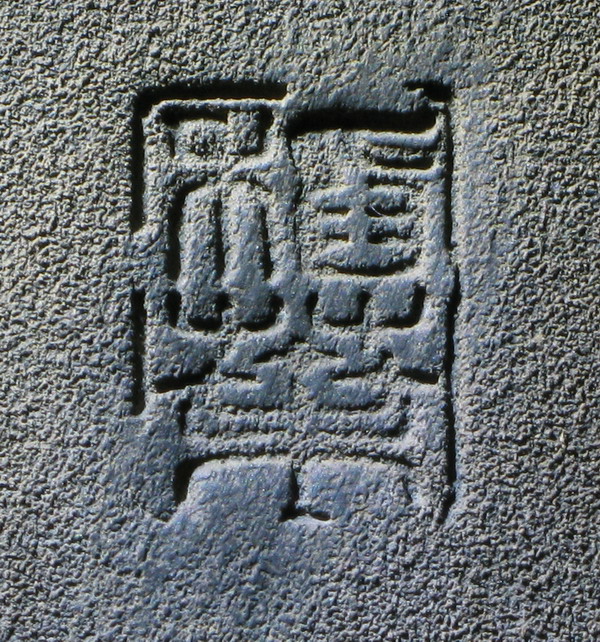 Here is the last e-mail content from my correspondence with Kojima San:

Hi,
I started this bonsai pot business about 10 years ago.
And Yamakou stopped his work soon.
So, I don't know much about what kind stamp he used.
But I found the pot must be 5F13, because the foot are very special design. > Please find an attached photo.

Sorry, I don't know it is made by Yamakou or just imitation of China.

That's interesting, what Mr. Kojima has to say. Now I wonder when the chop changed, because everything I have shows "Yamakou" just like my chop, and if the difference has a meaning. Sometimes the potters used different chops on different pots, but they read the same, like ours. If you look at the picture of my chop, it is written in standard kanji, not typical of chops. The first character in the upper left is "yama" (mountain), and the one below it is "kou" (or "ko"), (light). I have no idea about the other 4 characters, or their purpose. The chop on your pot is more typical of what you see, and can be difficult to read even by Japanese who aren't bonsai people.

One thing for sure, many of the old potters are retiring (or dying) and no one is carrying on their work. They had their own clays, styles, finishes and secrets - and they're gone. Many of these were/are so distinctive that they become easy to recognize - which is why I said your pot looked like my Yamakou - like the "Yamaaki" pots of the Katoka family.

Thanks for cleaning up the chop and sharing the picture, it's a big help. And hang on to that pot, it certainly won't be going down in value!

The chop Andrew wants identified, first is sideways and the last picture is upside down. I think this is in fact Yamakou. Like you stated, potters do change stamps from time to time. Some do it to broaden their market, others to celebrate a specific date.

How do you know it is upside down? Are some characters familiar to you? Also, have you seen one like it, or would you konw what occasion may have prompted this change?

Thanks for your inputs.

jrodriguez wrote:The chop Andrew wants identified, first is sideways and the last picture is upside down.

Yes, I've said that all along.

Last night I found something you may find interesting. I was looking through old copies of Bonsai-Shunju (June, 1987) and found your pot for sale. On the inside back cover there are some pots advertised and it's one of them. I don't know if these are Tokoname ads or what, but the pots are very high quality and include Yamaaki and Seizan. Even with the bad rate of exchange the pots are cheap, but it was more than 20 years ago too! Anyway, here's the breakdown...

I assume that's cm, and inside dimensions - but not sure.

Jluis is right its upside down

Hi, the Yamakou chop can translated to kanji:
濔 mǐ many; numerous
山 shān mountain; hill
滑 hua, gu, slip, slide; slippery, polished
奐 huan be numerous, brilliant, bright
燒 shāo to burn; to cook; to stew; to bake; to roast; fever, fire
造 zào to make; to build; to invent; to manufacture
Can be translate as, Many Mountain, Polish Brilliant, Fire Manufacture
Ancient Chinese and Japanese texts are written from top to bottom but sometimes they written right to left.

I don't know why, but I've just seen this now! Thank you for the explanation!