hello,
Send to friend :
My very small stone ( 0,35 Kg ).
It can describe landscapes extensively and poetically ... : THE LAKE .
Ask you to look up and put back impression .
Thank you . 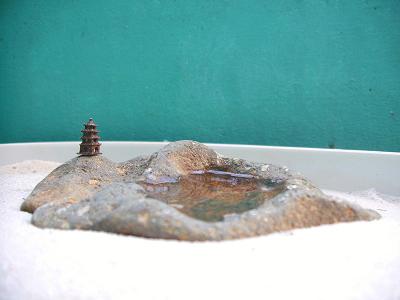 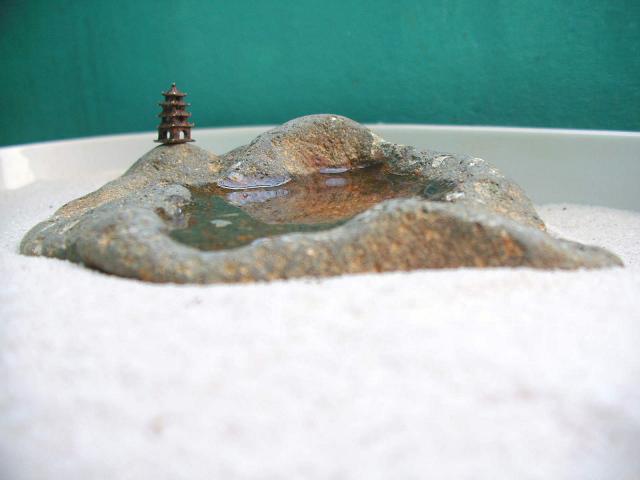 This is a beautiful stone. Please consider choosing a much smaller object as a pagoda, if you need any object at all. The preference for most stone enthusiasts would be for no object. A pagoda matching the size of the distant hills behind the lake would be so small as to hardly be noticed.

You mention the stones weight but only refer to size as "very small." I hope it is not less than ~3 in/8 cm. Even for group display of small objects, it would be better if at least 4 in/10 cm as a Japanese style suiseki,

The dark & overall pitted stone with rust color (iron) in its pits is excellent in stone quality for Japanese style suiseki. TIt appears a very good stone for water-aging & tray display to allow moisture to evaporate slowly from its surface.

A waterpool stone is especially rare & valued if it looks like a lake at the foot of hills which allows water to drip off of its front side either to the right or left when overflowing. This one appears ideal in contour!

For me, your second photo's front is better than the first-- mainly to assure the water is flowing distinctly toward one side rather than roughly flowing at the stone's midsection. The side toward which the water overflows is the direction of the waterpool stone's visual flow in Japanese suiseki practice. Concern for direction of water flow should override concern for placement of distant mountain peaks on a waterpool (mountain lake) stone. Still, it would be nice if the stone could be arranged with the major peak off-center.

We cannot see the bottom of the stone. If it is deep, then it might require a deep suiban. That is a reasonable choice for a well contoured stone. The stone is also photographed from such a low angle that its depth from front-to-back is hidden. Normally, a stone is viewed with its longest dimension running right/left rather than front/back. I hope you'll share a picture taken at a higher angle!

Thank for your comments fully .
Send to you a stone image of the scene taken at higher position . 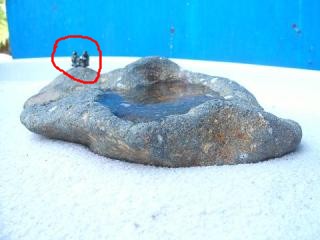 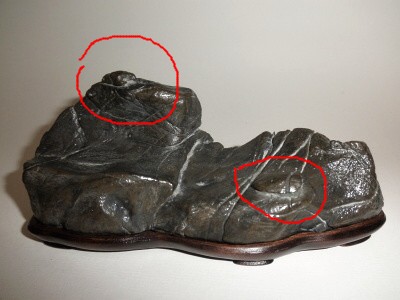 Peter shows a "mountain lake" stone with the addition of a natural protuberance that can be felt an architectural detail. These are not uncommon among Japanese suiseki, but the category is seldom listed. Luciana Queirolo published an article devoted to this style of suiseki ~2005 or 2006 illustrating both Western & Japanese examples; it might still be accessible through the I.A.I.S (Italian suiseki) web site. Having multiple layering of expression is nice. I have a Ligurian stone with a similar "mountain lake" that, if filled, looks like a double gourd.

The particular stone Peter adds for display is limestone, which isn't the best of stones for a waterpool. A waterpool stone is best displayed in trays with water slowly evaporating. It is a mystery to me as to how a "mostly-mountain stone with a small depression where water could sit" is best read. I was taught in Japan that a stone recognized for a waterpool is primarily placed in display by the overflow of water from the pool, EVEN IF significant mountain peaks supporting the pool suggest another placement. I do not think Peter's stone is a legitimate waterpool suiseki-- mostly because it is limestone, which does not respond to water aging & should be dry-aged (merely dusted). Today, I would consider it a distant mountain stone with a lake (rather than a classic waterpool stone). The form & stone quality of Nguyenvuhung's waterpool meets classic suiseki guidance... and its revealed size at ~3 1/2 inches is fine for shohin (small object) stone display. 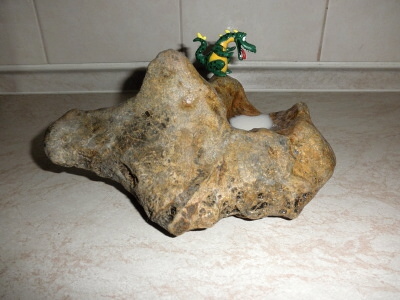 Hi friends,
Thank you for the article that you did for my stone .
I want to become ... active member of this forum .
Send to you my latest stone : ... THE LAKE ... 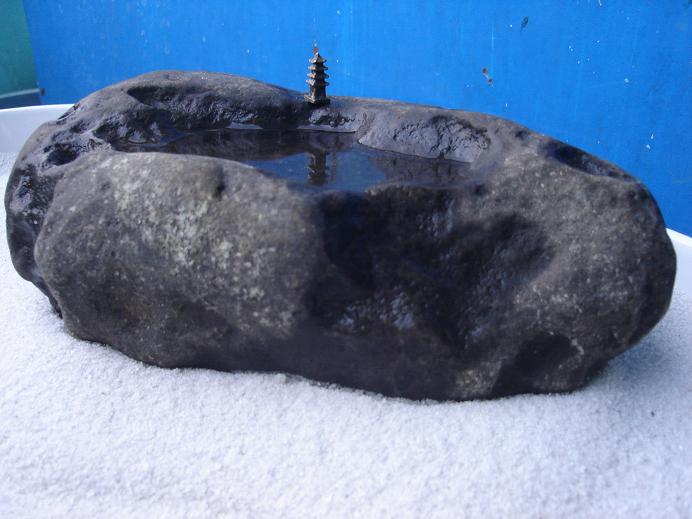 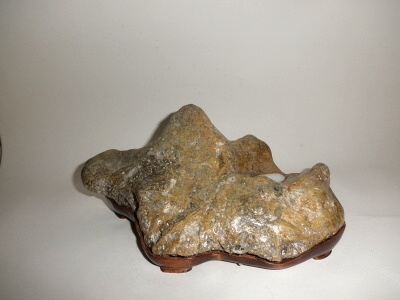 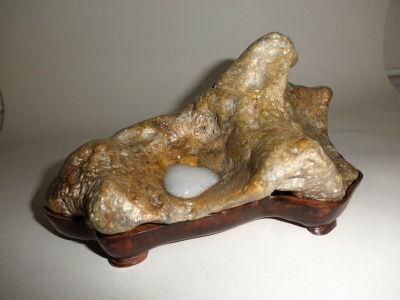 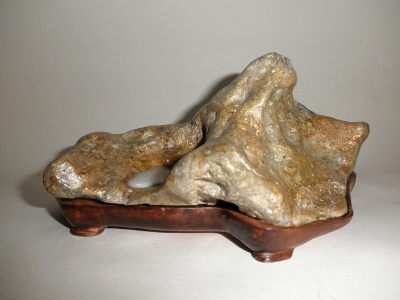 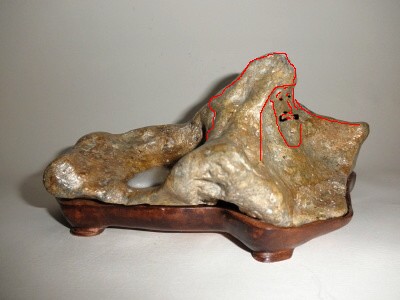 Hi Trantanhung... Your stone leaves the impression of a "sheet (broad/wide rather than narrow) waterfall" falling over the natural stone dam of a lake surrounded by eroded cliffs. It is very appealing-- especially because the unadulterated surface, dark color, irregular shoreline have the taste of a natural scene. For me, the pagoda is much too large & placed at an awkward position at the foot of the tallest hill; I would take the pagoda off of the stone.

What does “Lanjutan” mean in your title?

Without recalling a lake with such a nice sheet waterfall , another choice of detail for reference would be the eroded cliffs. How about the Red Cliff of Dongting Lake (Hunan Provence, China). Dongting Lake is often shown in art with a lonely boatman returning to shore. It is also associated with many other poetic scenes If you want an accessory of a boat, place it well-off from the stone so that its size will not be compared to the expansive landscape.
_________________
... visit the U.S. National Bonsai & Penjing Museum, Washington DC USA-- http://www.bonsai-nbf.com

Hi CHRIS COCHRANE ,
Your full sense about my stone ... on the lake , and on the waterfall ...has helped me to lear more about the review of rock and a special game of soccer SUISEKI ...
I also read your other posts ... and study it very much .
Many thanks about your sharing .
Respectfully .
HUNG-TRAN