Please see thread on boxwood substitute for my rock planting. I have just about decided on Nia. But I have one question. Has anyone tried growing it in the North?

Nobody grows it in the North?
When I start working with a new bonsai species, I like to have some idea of how it grows in nature, even if I am not going to style it that way. I combed the Internet, but the only pictures I found of this tree are bonsai. Nice to know it is so popular. Does anyone know where I can find a picture of Nia growing in the wild?
Iris

Howdy Iris – your second posting got me wondering what was going on with a plant so well known in bonsai circles but for which no one (nor the all knowing Google) had access to photos from its native habitats. Here’s what I found and what I suspect: (for those of you not interested in botanical arcana, please stop reading here!)

First the genus Neea is in the Nyctaginaceae (I think you have a botanical bent so I’ll not explain that further unless you request it) and is distributed throughout the neotropics. The first specimen of the genus, Neea verticillata, was described in 1798 by Ruiz and Pavon in the publication Systema Vegetabilium Florae Peruvianae et Chilensis. It now includes more than 140 species descriptions (but I can’t say how many “real” species because I can’t easily locate a recent generic revision in my database search.) The name Neea buxifolia is based on a reclassification of the earlier binomial Eggersia buxifolia published by Hooker the Younger in his Icones Plantarum in 1883 based on a collection from the island of Saint Thomas. It was Anton Heimerl who moved it from Eggersia to Neea in 1896 in his publication Botanische Jahrbücher für Systematik, Pflanzengeschichte und Pflanzengeographie (don’t ask me to translate because I can’t…)

The only botanically verified references to the name Neea buxifolia that I can find quickly are all collections from Puerto Rico. That is not too distant from the type locality of Saint Tomas. However, I cannot find verification of this binomial in any of the current botanical literature. That mean several things, two of which are that the genus is understudied and needs someone to take it one (you game?) or that the name is probably something that should be relegated to synonymy in a botanical nomenclature sense but that has been pickup up and perpetuated by the bonsai community. I did find a reference to Neea buxifolia as an endemic species to Puerto Rico, but first I have to question the validity of the source (Wikipedia…) and it does not jive with the type locality for the species, notably Saint Thomas.

OK – I know you are saying enough is enough, but your question led down such interesting paths… And remember, these are my suppositions not things based in direct evidence.

We have had a number of folks posting on this site from Puerto Rico, so perhaps they can shed some light on the subject, if not to the appropriate botanical name at least to meeting your request for a photo of the plant in habitat.

Iris; thanks for the fun and especially for the longsuffering on the pedantry!
David Brunner

Like you guys, I found no images on the net using a couple of search engines...even looked for 'saltwood' which is apparently sometimes used. Thanks for the scholarly reply, David!

Odd. I checked with the International Plant Names Index, and that is the correct name. The UConn plant database doesn't have it. It is described as an understory tree, so maybe it is so un-photogenic nobody ever bothered to take a picture of it. I vaguely remember there may be a picture of it in the article in World Tropical Bonsai Forum. It didn't look like much of anything.
Botanische Jahrbücher für Systematik, Pflanzengeschichte und Pflanzengeographie = Botanical Yearbooks for Taxonomy, Plant History & Plant Geography.
Bougainvillea is the only other bonsai genus I know of in the Four-o-Clock family, but it is so different I doubt there is anything to be learned about care.
According to the USDA Plants web site, N. buxifolia is native to Puerto Rico and VI. It is mentioned as a native bonsai subject in PR. Dunno if they use yamadori.
Iris

That would indicate that it is found growing near the shore, and is tolerant of tap water. However, I have never heard of it having mangrove tendencies. I am looking forward to redoing my rock planting with it.
Iris

I was going through some papers on bonsai species and found three articles given to me by the previous owner of my Neea. The sheets do not give the source but one is by Nelson Hernandez and I believe it can be found in the BCI BONSAI magazine April/May/June 2006.

Mr. Hernandez speaks about the popular spelling of plant as "Nia" in Puerto Rico. He also speaks about it being collected in the wild zones of the island but another source mentions the species as " growing in semi-exposed positions on the tops of ridges which are moist and dry forests over sedimentary (especially limestone), igneous and metamorphic rocks. It is rare to infrequent in most habitats except the moist limestone hills of northern Puerto Rico but is sometimes found in coastal thickets."

The Hernandez article points out the bonsai's wiring problems which I have experienced. The branch width needs to be around 1/16 through 1/8 of an inch before wiring. I have wired too early which has resulted in dormancy to the branch. This may be the reason you first neea was unresponsive, Iris.

You'll love the tiny yellow bell flowers and the red berries from this plant. I hope you can get a copy of the BCI article there's a wealth of good information in it.

Hey, Iris
I found a couple of nice pictures of this species
I hope they can give some inspiration

Thank you. I am all fired up.

Google will find an incredible number of pictures. I would like to see more rock plantings. I'd love to see what the wild ones growing on ridges look like.
I case there are any anoraks around, Neea is undoubtedly named after Luis Née. According to Wikipedia, who got it from Australia, "Luis Née (fl. 1734-1803) was a Franco-Spanish botanist, who accompanied the Malaspina expedition to the Pacific Ocean coasts of North America and Australia. He described many new plants, including the Coast Live Oak, which he discovered in California." Nia is the Spanish vernacular spelling.
Iris

I saw some of these venerable specimens at the International Bonsai Exhibition.
Last spring I redid my rock planting with baby Nias from Meehan's Miniatures. http://www.meehansminiatures.com/
I did this as a demonstration for my club, so half of them died, no surprise.

Since then I filled it in with more Nias, a couple of subminiature ivies, & the inevitable mondo grass. Not ready for a picture, they are still being held in place with string & wire.
After a few months under lights and a record hot summer outdoors, I think I can definitely say this species is very well suited to my conditions. Yes, it is fine for rock planting. The tree at the top of the rock is just as healthy as the others.

These little things are cheap, too. As previously mentioned, it is slow. Since it is not very suited to wiring, shaping & training is mainly done by clipping & shearing. I hope to have a picture in a month or so.
Iris

Hi Iris,
Would the Nia buxifolia are the same family of what i have posted before? "Maba buxifolia..is it under pot?"Jose Luis posted one but differnt texture color of the bark,here ours are a bit black,want to know also

Nia buxifolia is not a coastal species and does not have mangrove characteristics. Also, it is highly intolerant of salt spray. Wild nia are not beautiful, as they are tubular and seldom have taper. Most of the trees in display at the world convention were, in fact, originally 15 to 20 feet in height, which were cut down and had the branches regrown.

The 'bushy' growth you often see in container grown plants is NOT typical. They tend to grow long, sparse and leggy in their native habitat. The reason behind this is their undergrowth stature.

Wiring is the preffered method of training. You have to do so when the branchlets are young and flexible. Waiting too long will cause the branches to harden and become brittle.

ogie wrote:Hi Iris,
Would the Neea buxifolia are the same family of what i have posted before? "Maba buxifolia.
Regards,
Alex

Neea buxifolia belongs to the Four-o'clock Family and is related to Bougainvillea. It is native to the Caribbean. Maba buxifolia is a native of the Philippines and belongs to the Ebony family. They are not related. The name buxifolia means "box-leaved" and is given to many different unrelated plants with little round leaves like a boxwood.
Iris 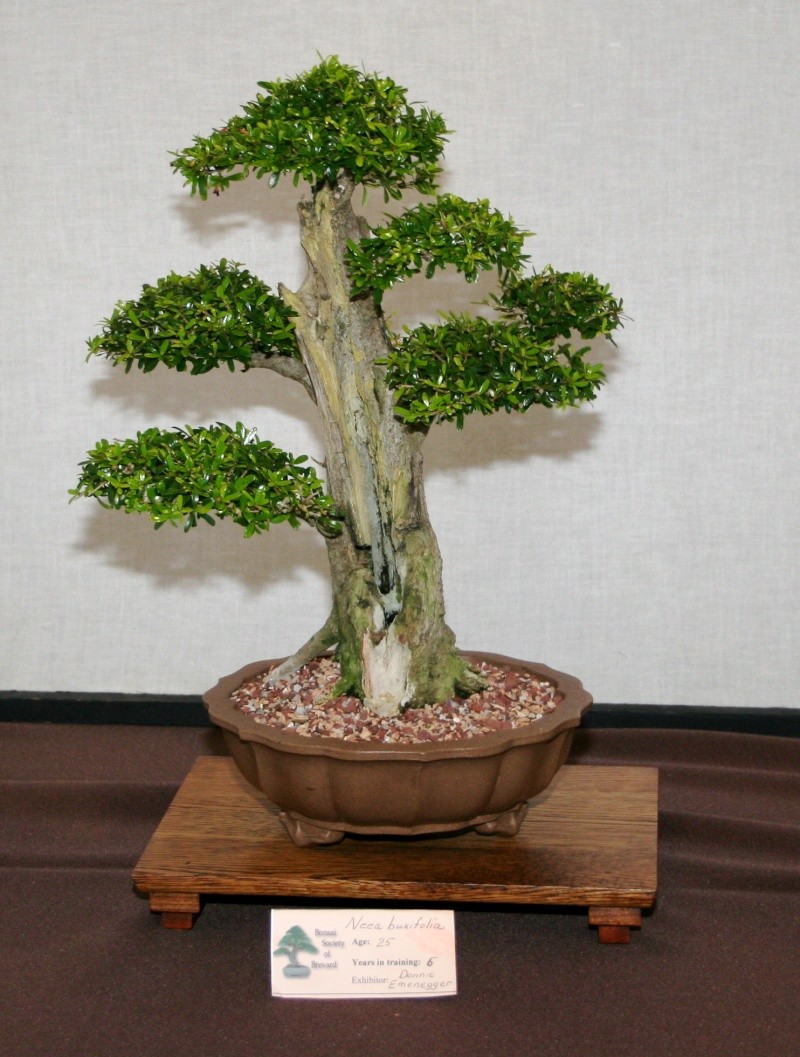 Thanks Iris for the clarification,

It grows like a weed in PR. Search Pedro Morales, a terrific bonsai master in Puerto Rico. 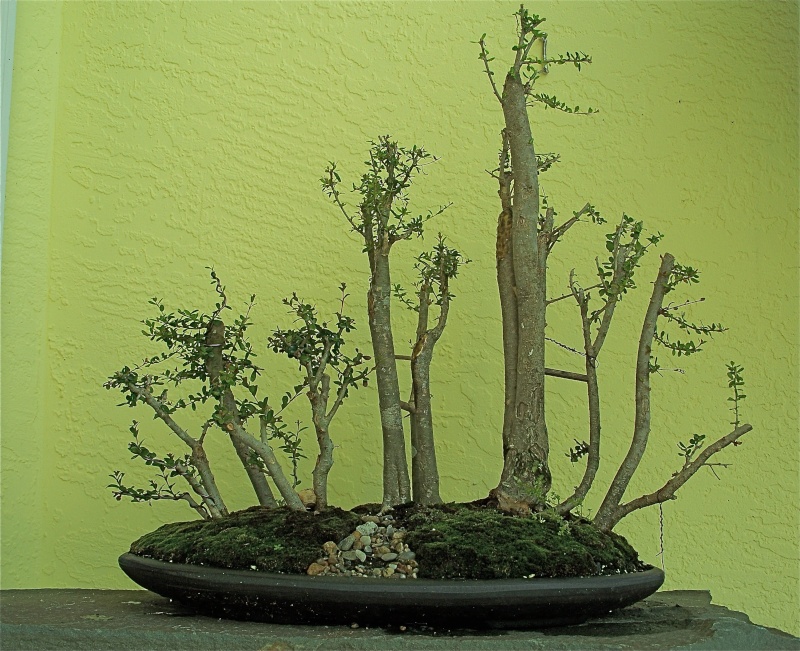 You are aggravating my zone envy. All you need is a coqui frog (the symbolic animal of Puerto Rico).
Iris

For those who like to know a little bit about the taxonomical aspects of Neea Buxifolia, search taxonimist Alain Liogier. He did extensive studies on this plant.

I tried, but I couldn't find anything on Neea. Do you have a specific reference?
Iris

As far as I can tell, that's what he called it. Also, that's what the USDA calls it, http://plants.usda.gov/. They are generally up on the latest taxonomy. So let's leave the poor plant where it is.
Iris
Still trying to get people to accept Ficus salicaria and Carpinus turczaninowii.

Here is my rock planting. Sorry for the poor lighting. My husband had a fight with the camera.
True, the plant is a slow grower (under my conditions), but once established, that is not so bad. It does not need pinching so often. I will still aver that the species is well suited to growing under fluorescent lights, & did well outdoors over the summer. It likes heat and requires moderate, but not excessive, humidity. I had it in a little less than full sun. I haven't seen any sign of insects or disease. Don't expect it to bloom during this phase.
I wired a couple of trunks. Everything else will be shaped by pinching & pruning.
I would not try growing it on a window sill in the North.
I would not recommend it for a demo tree (except those big specimens in Florida).
Dunno how it would work for a workshop.
Iris 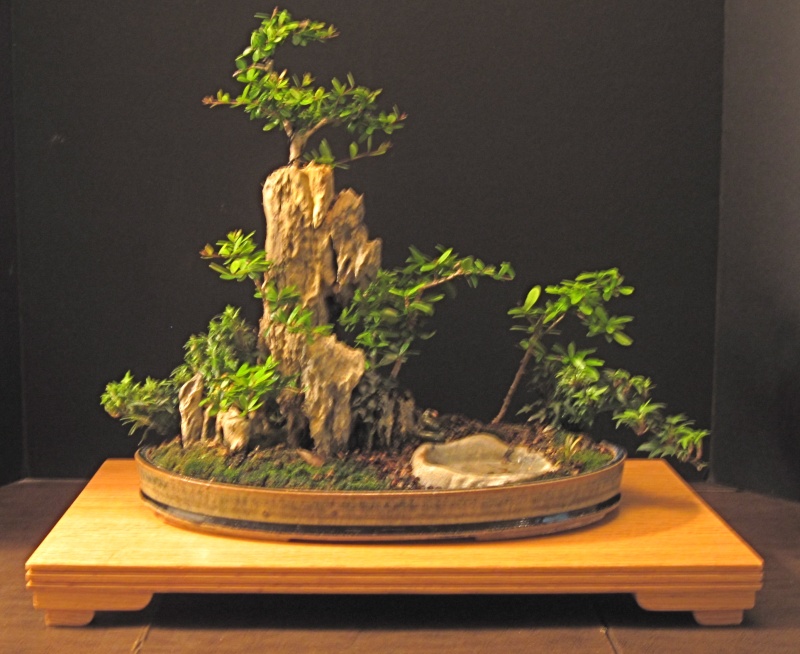 Oops, cut off the right end. I will try to get a better picture.
Iris