I have this Trident maple that  I "inherited" its pretty big, you can see a computer speaker in one of the photos 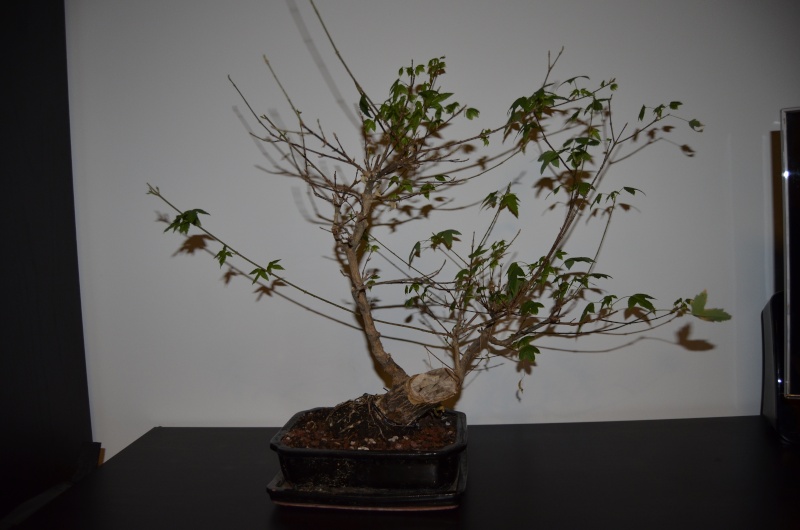 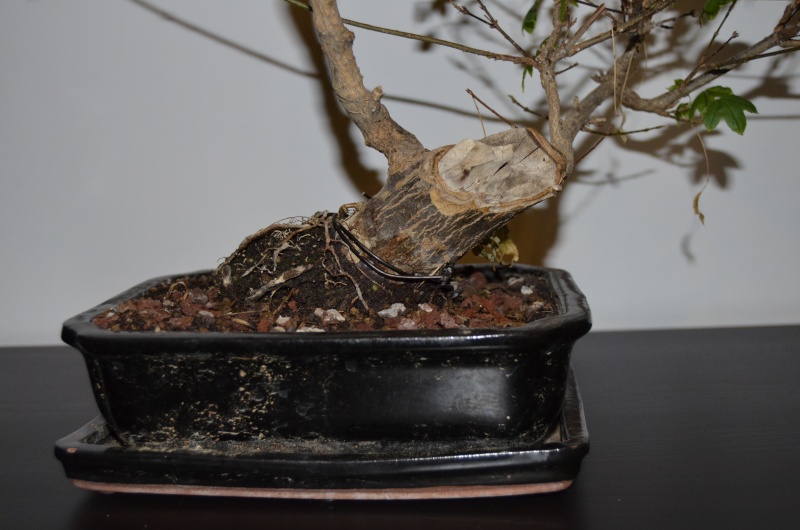 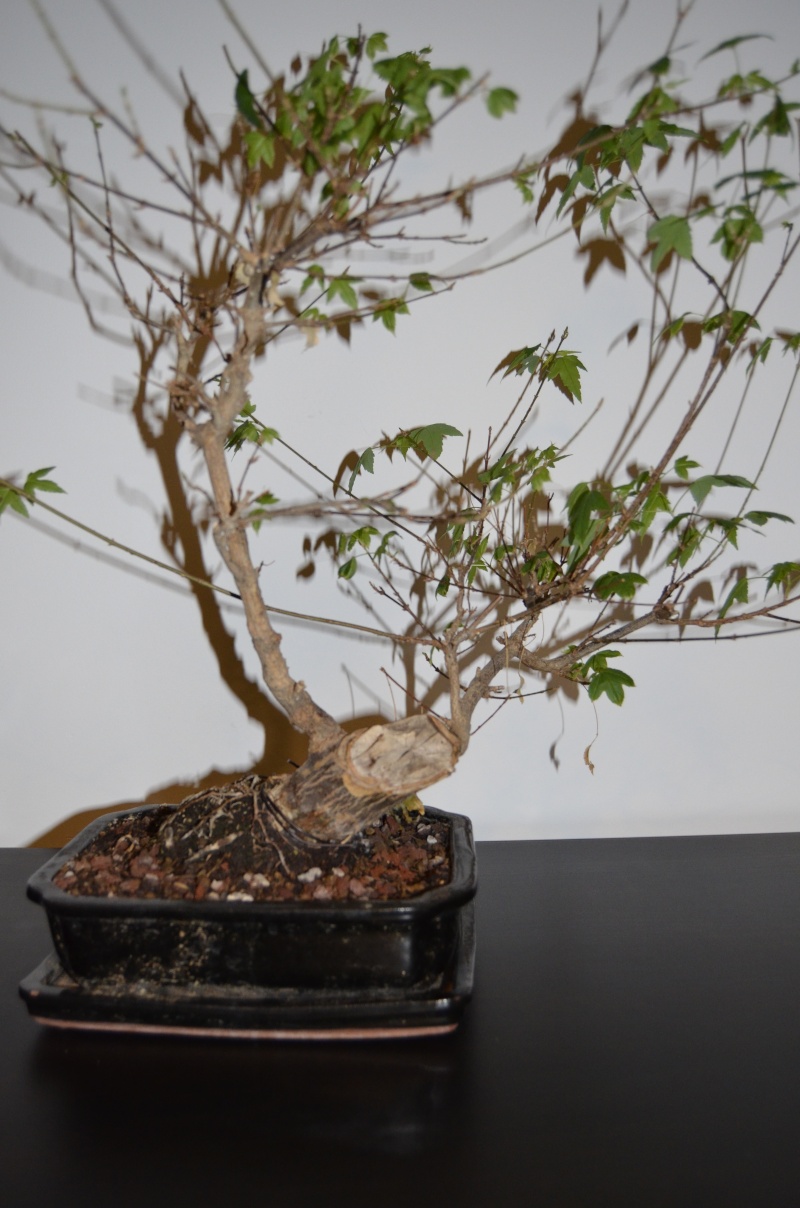 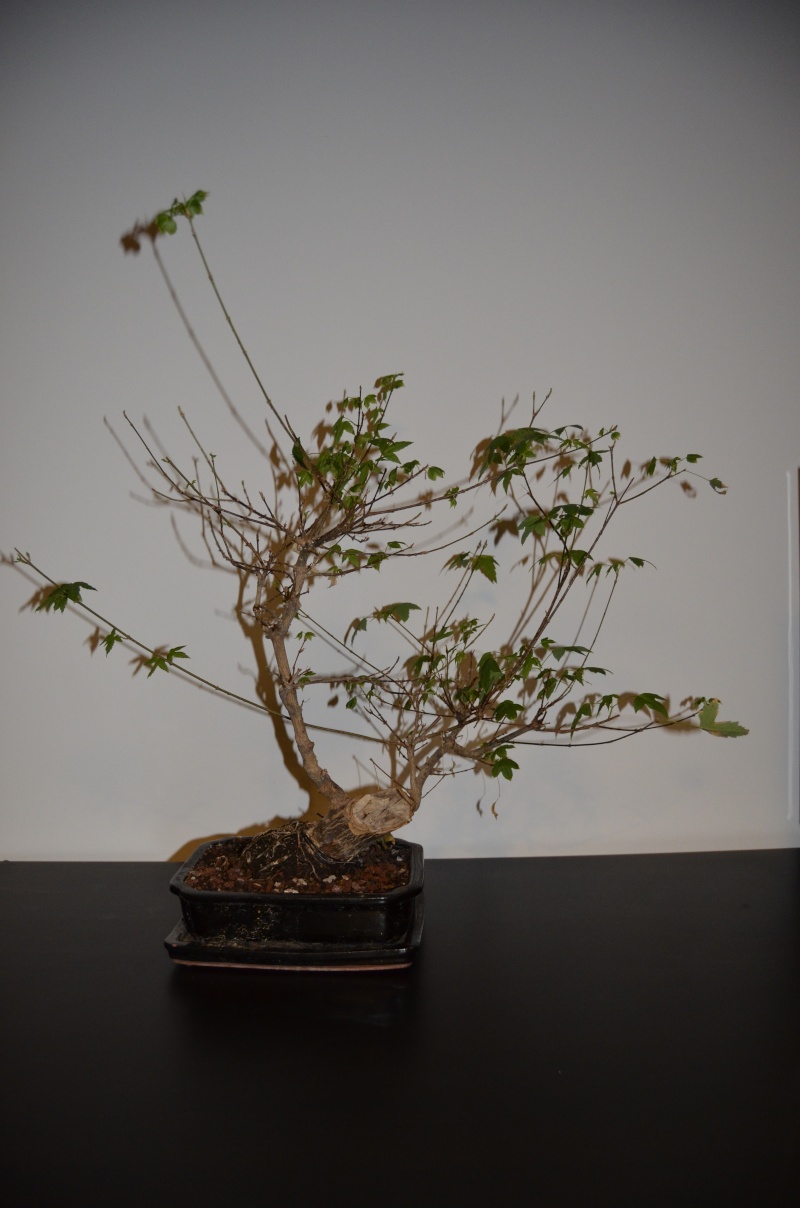 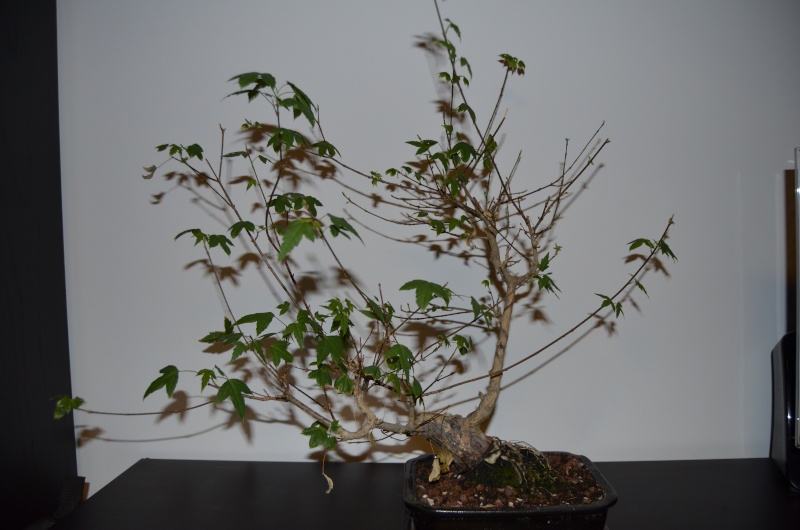 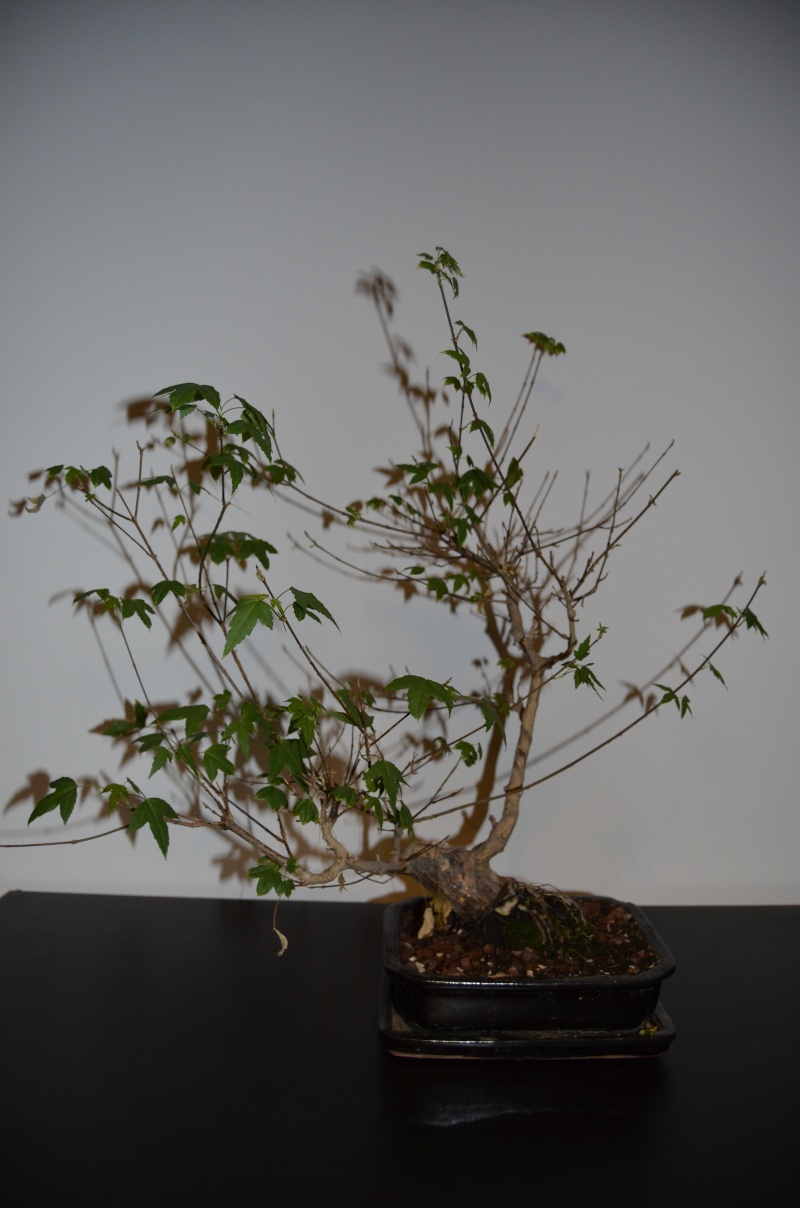 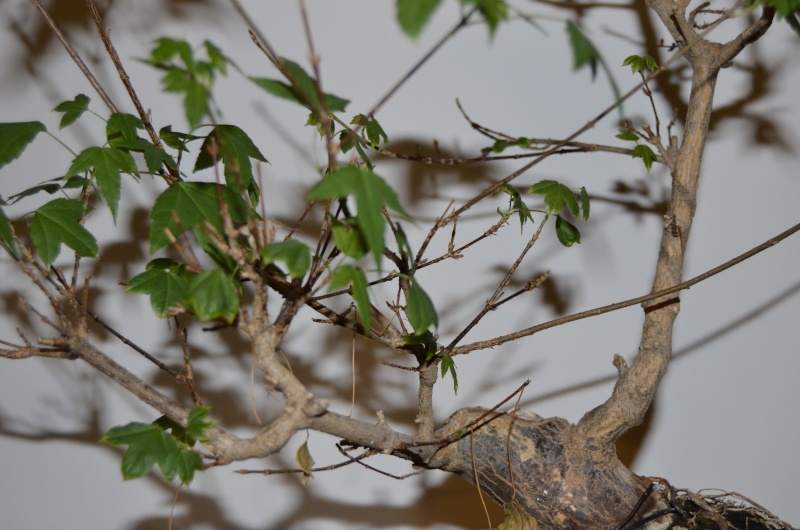 can someone please advise me on how to style it? I would appreciate any help. thank you

It looks like someone used a beaver to make the chop cut. If it were mine I would cut off everything on the right side off,including that nasty cut. Leaving the left branch as the next section of my trunk. Once fat enough,chop it and start growing the next section.
I would get it out of that pot and into the ground if possible. It will thicken up pretty fast. If planting in the ground isn't feasible,then a colander.
This is what I would do for sure. I know it isn't styling. But let's be honest. The way it is its kind of ugly. I think no amount of wire will help.
I hope you don't mind brutal honesty.

Of course I don't mind, that's why I put this post here, because I want an honest opinion.

Since I'd be starting over with this one, you're telling me that probably I should just air-layer the left branch and plant it on the ground, just like this, right? 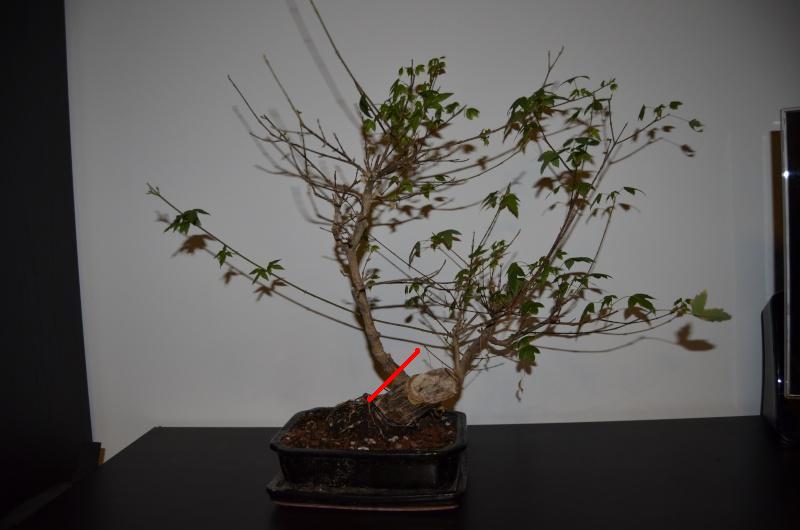 I can do that, and I realy think it would probably be my best option.

Do you think I can do something with the right side? because I think I can probably carve the "beaver stomp" into something nice and give it a semi cascade look, would it be a good option? 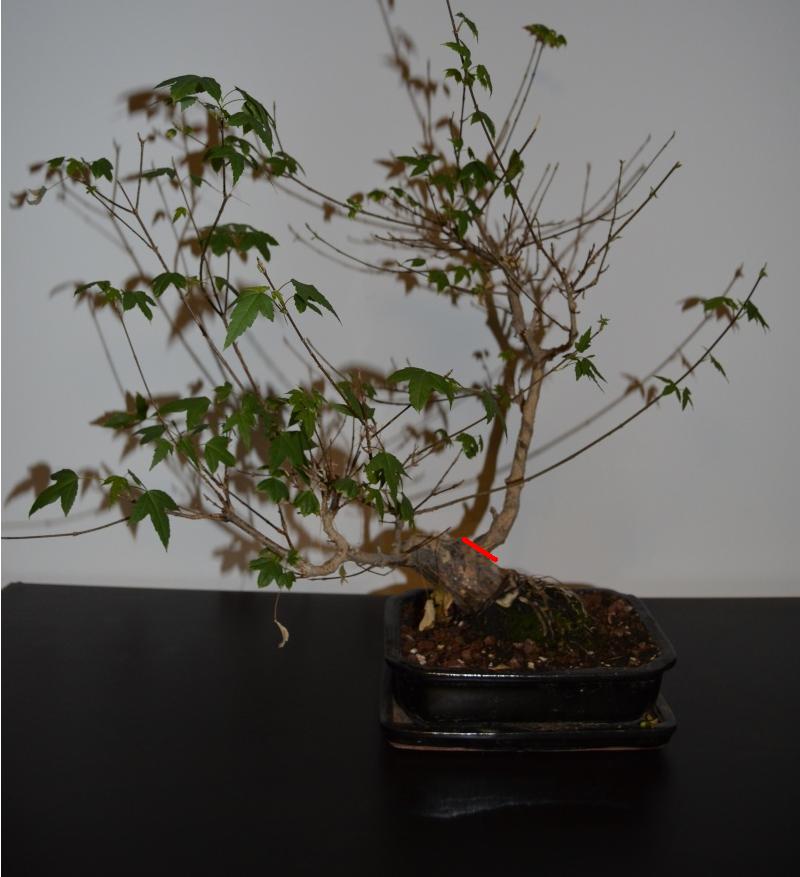 the foliage seems very sparse at this stage... if it were mine, i would just slip it into a larger (wider not deeper) pot (or colander as suggested) and then just let it grow some and regain some vigor...

after that, some styling options may become more evident...

Agree with Kevin. It does not look healthy enough for too much work. Replant into a larger container, cut back by quite a bit and let it be for a good long time.
_________________
Jim Lewis - lewisjk@windstream.net - Western NC - People, when Columbus discovered this country, it was plumb full of nuts and berries. And I'm right here to tell you the berries are just about all gone. Uncle Dave Macon, old-time country musician

By the way, when not photographing the tree, you ARE keeping it outside, aren't you? If not, that would explain the weak growth...
Oliver

Well, I might have not told the whole story, the thing is, the tree was left outside under full sun for 4/5 days (WITHOUT water), well that's 4/5 days of Portuguese hot dry summer ( arround 35Cº/40Cº when it occurred) , when I was given the tree it had no leaves, all of them were dry and crispy (although lots of them still green), these pics are the result of proper care for 2 weeks. Yes its kept outside during day, inside at night.

I'm saying I would only keep the left branch. The one you want to airlayer. Cut off the rest up to it. That changes the direction of the movement and gets rid of everything else.

Change the planting angle next spring. Stand it upright. Use that branch extending out as your new leader. Do you get what I mean?

I agree that it needs to become much stronger before any work. I think you could also keep both branches - cut the side branch back severely to create the lowest branch and allow the upright branch to grow strongly and become the rest of the tree. You could even make the side branch into a cascade or semicascade branch. In either case, the story is that the tree was knocked over and the old apex died back and became this side branch while a previous side branch became the new leader. Might even be able to incorporate the very ugly scar into that story. I think the semicascade is the best version of this story if you chose to pursue it.

I think one of the things we overlook in situations like this, is the opportunity to change pot designs. It's subtle, But I think by doing so it gives a better "look" into the future as to the direction it's going.
For example if you opt to go for a cascade look as has been suggested, a cascade looking training pot (even oversized to get it healthy) would help you visualize how it might eventually look.
It wasn;t that long ago when I'd grab the right sized available pot while training just because it was easiest. But have since learned that the right pot even for training can help make a small visual help with design.

A healthy trident will grow like mad and they cover up scars quite fast.  You are in Portugal, so the warm weather will guarantee success.  Don't remove anything now, as those few leaves and even the wood have to deliver the energy into the roots that will kick-start it next year, and if it loses anything more it will either die, or just linger for a year or 2.  Leave it alone, maybe one last weak feed for the year if you leave it in that pot. If you re-pot it then do a gentle slip pot only, and don't feed it.

My approach would be to get it into the ground or a wider pot or ideally a pond basket and feed the hell out of it next season until it is very healthy again. I would actually not even try any styling on it at all next year.

But you created this post because you want some styling input.

I am not convinced that the planting angle is helping.  It just looks like a tree that has been tipped over and chopped short.  There is no convincing reason why it is at that angle.  If the roots can be spread out and you can reassert the tree as an upright I suspect you are going to be able to grow a very nice sumo style trident.

I would be heading in that direction, and my first heavy cuts would be made after next year's growing season and they would be brutal - In the winter after a year's growing I would remove all the existing branches and leave only anything that is completely new that sprouted from the trunk. If nothing sprouted from the trunk I might still go for a complete cut. Seal the wounds and make sure they are all clean and slightly recessed and they will heal over in 3 years easily.

Then let it grow unchecked for the next season. In spring, while it is dormant, I would re-pot it with the specific intention of getting the roots to spread out radially and to start pressing hard for a wide and solid trunk flare. WIth such a huge and stumpy trunk this is a logical appraoch to take.

The roots will then power a season of growth and this year I would not cut anything at all until after the season is over, the leaves have fallen off and the tree is dormant. I would cut away almost everything again, just building as thick and wide a trunk as I can. Chop off all the long growth from the previous year unless it fitted the design of a sumo style tree. In the spring I would again re-pot, and again I would focus on root flare.

By now you will have a tree that is upright, short, wide, with a good root flare and a number of scars that are beginning to heal. In short it will look very old and ready for the first season of growing the new top.

I would grow at least one sacrifice branch, but I would carefully manage the wiring and direction of the branches I want to keep. When you are styling a trident you are better served doing the shape pruning in mid season, as the fast growth will heal the tree faster.

But a trident in full leaf is almost impossible to wire or even prune, as you can't see anything due to the leaves. So in winter, while it is sparse, you should mark the trunk and branches to show where you will cut. Then in the summer you can simply look for the marks you made and make the cuts.

If you wire it check the wire every week - a trident in full leaf will very soon suffer from wire biting and it is hard to grow out the scars.

I would probably try and propagate anything you cut off - tridents often grow from cuttings even if they are quite big.

So if I summarised my advice about styling, I think it is a bit of a hopeless case as it stands, but you will love what you can do with a sumo trident in 4 - 5 years.

Hi guys, and thank you all for your input. It’s greatly appreciated.

I had to do something with it, so my first approach was taking care of that nasty beaver chop. I cleaned and sealed it (sorry for the late night pics). 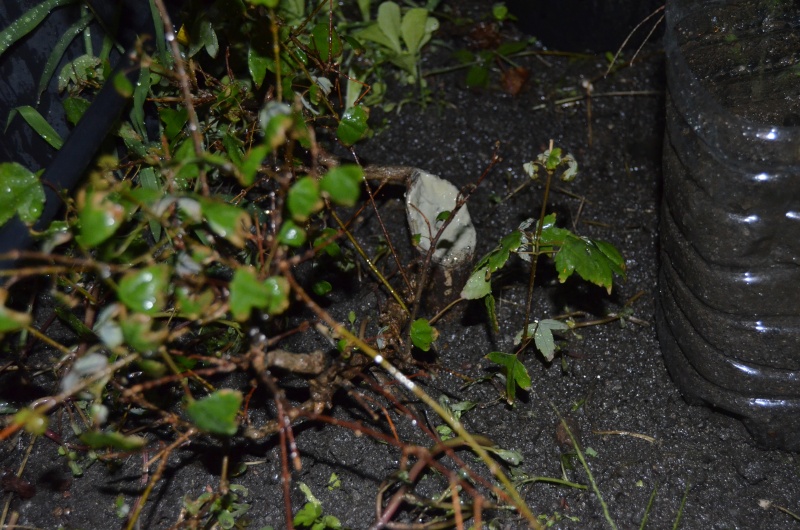 My next choice was following with BrendanR ‘s vision to plant it upright, and I did it on the ground so that it gathers some vitality as recommended by everyone, after I did that even the scar looked better. I know that in a couple spring’s I will have a lot more to work with (sorry for the late night pics). I also tried layering a branch by securing it on the ground. The plant is really sheltered there are lots of trees and plants around it. 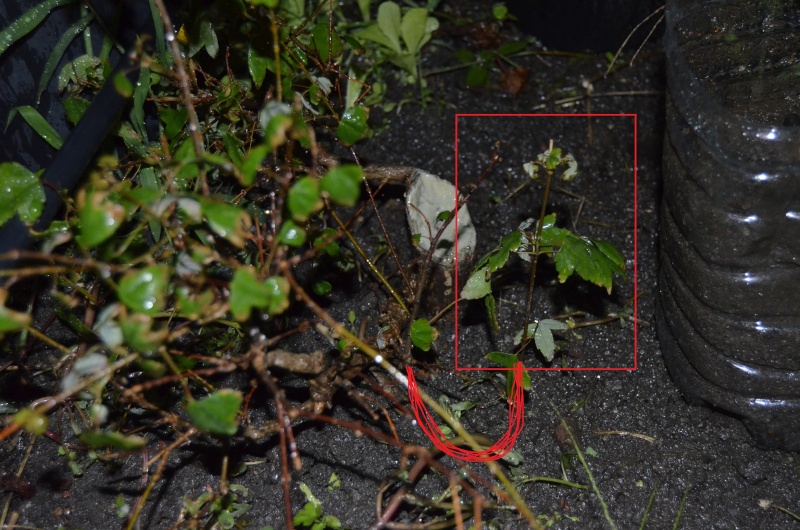 I will post the progression as it goes on. Thank you for the help and see you next summer for an update.

whether or not your advice is followed by GLH, i wanted to thank you for the development synopsis...

I can't take any credit for the approach I wrote down, as it is old wisdom that I culled from "Bonsai with Japanese Maples" by Peter Adams. An excellent book and, as they are quite old, you will find one cheap on Amazon or Ebay.