You have a point there, the acer is more resting in its self on the small jitta....what I had in mind was a whole diplay talking with each other...trees together..stands together...all together

The trees is always the mainsubject, and the importants of the stands should probably be toned dawn, as you say...and only make sure, the one does not  compeed with the other in streingth.

If I used the kusamono, would I prefer to place it on the table as is.

The scroll is not needed, but I think in the end it comes dawn to personality...I like my displays with a feminie touch.

Yes, display is a personal activity and you should express your feelings as you want. Sharing your bonsai and feeling with others is another aspect of bonsai which most people forget about. Respect too is important and I'm talking about the tree/container/table, not only with people.

If I'm honest I've been a little reluctant to express an opinion in this thread because as I will freely admit I know almost nothing about shohin display and certainly have no personal experience to call upon.

If the objective is to arrange the various elements so that the overall composition is more than merely the sum of its parts then I think you have most successfully achieved this in your photo No 5.

The reason I would choose this composition over the others is partly down to the positioning of the two trees relative to the scroll but primarily because I prefer the longer scroll, I prefer the maple on the low stand and I much, much prefer the taller and stronger cascade stand.

To my untrained eye, the lighter, thinner cascade stand is too weak for its tree and too low for the overall composition. This leaves the maple as too visually dominant or at least as a strong contender for visual dominance. As a result they seem to compete with, rather than compliment each other

Having said all that, I still think that perhaps composition No 5 could be improved by adding the accent plant that is shown in your last photo.

So for what my (highly inexpert) opinion is worth I would be tempted to combine the elements of No 5 and your last photo. So that would be essentially photo No 5 but with the accent/kusamono placed directly on the table as it is in your last photo!

Still, what do I know

Anyway, thanks for giving me something to think about. Much more interesting than watching TV on a Saturday evening.

When I said "your last photo" I actually meant the first photo in your last post!

Personly I like my displays to be understadet and a bit feminine...But in a big exhibition were Clubs exhibit from all over europe, can my entry easily disappear, especially if the entries is placed a bit close to each other...and I am still thinking.
The small scroll is usefull, if the displays next to mine use scrolls...this  way will the overall view maybe not be too much ( I dont like a forest of scrolls in a exhibition), I will wait and see what the exhibiton bring...I am planning to bring both my scrolls, prepared not to use any...my stands is to the small side...and again, if the other displays close to mine use heavy furniture, will mine have a hard time/problem.
As soon as the acer have leaves, will this tree be the biggest tree, and in the front.
I have two more high stands. I can take some new photos tomorrow, and then we see...

I have seven more displays to add

Please note the acer will be bigger, and also the kusamono will be bigger in the spring...this is why I left the kusamono in the background....it is only on some of the photos. I also just used the long scroll, but please keep the short in mind too....

Look forward to your responses 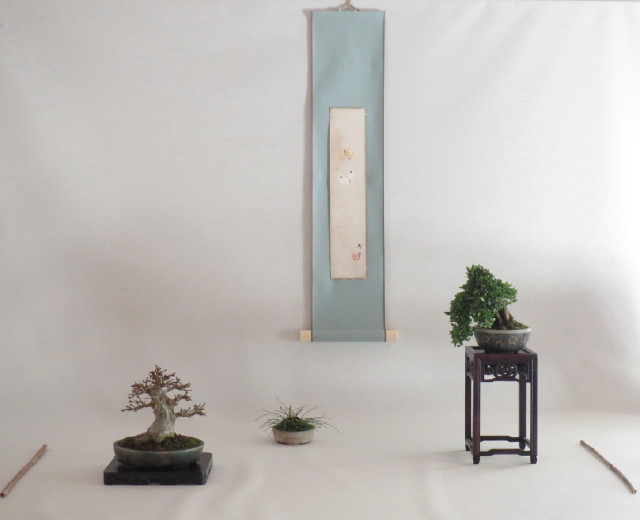 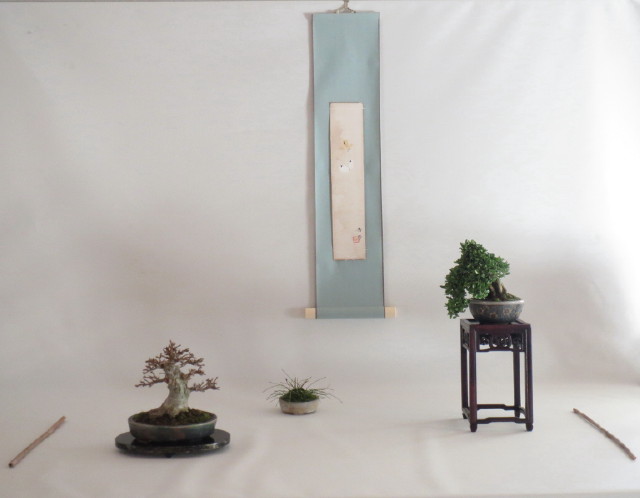 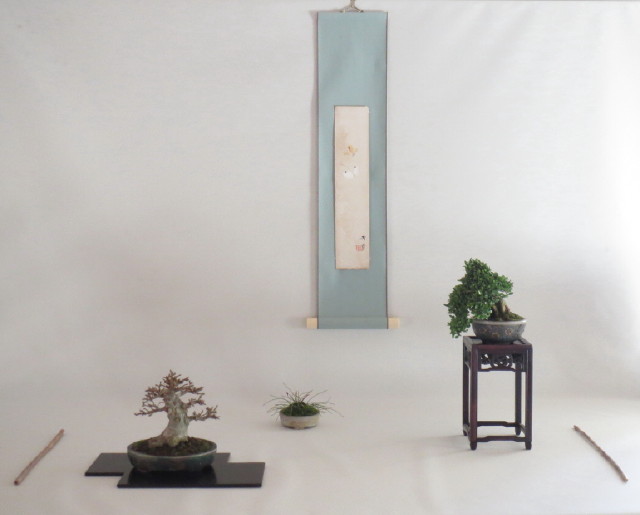 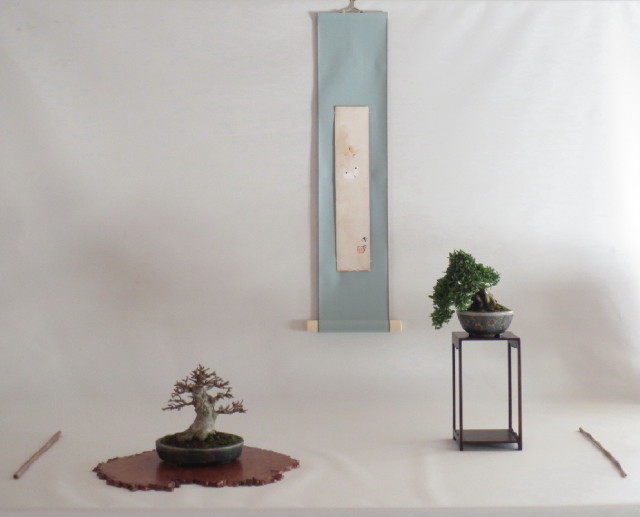 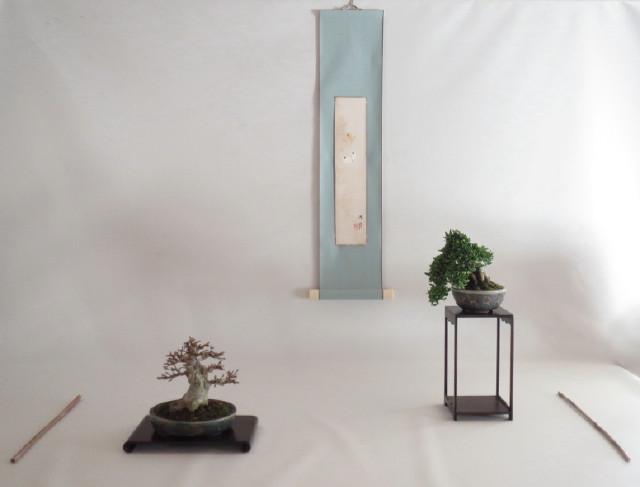 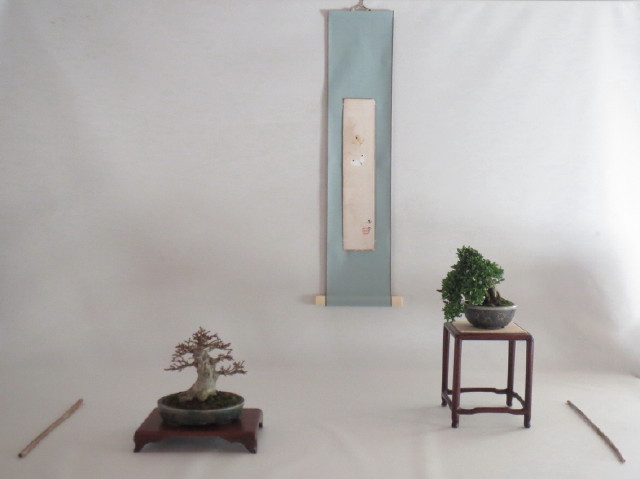 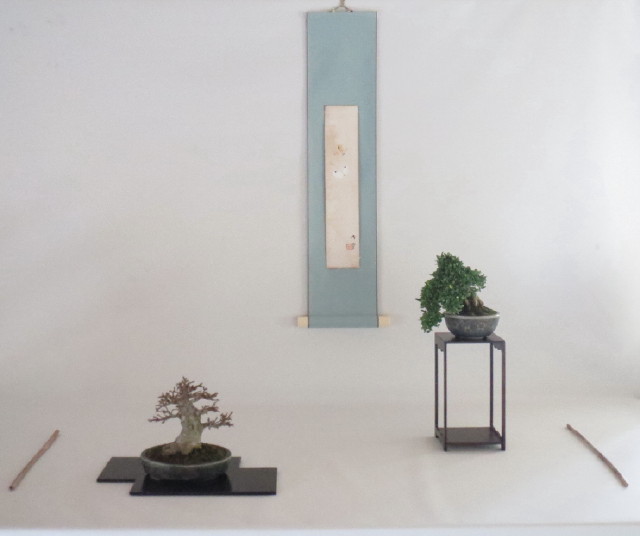 Number 14, appears the most harmonious, although I feel the Acer is pointing to the wrong side. The major branch closes the tree to the right, the open space on the left side of the trunk is open. Every time I look at the tree I have the urge to turn it around.

A favour; could I please have some shots of the cascade table in pics 14/15, side view and close up. I haven't seen a design like that before.

My preferences when shaping the direction of a tree, growing slanting out of the soil, is to make sure the treetop end in the same direction.
To turn it, will always be a no-no in my opinion, even if the branches is not fully developed yet.
The tree has been mine for 2 years, and the work will be a ongoing proces 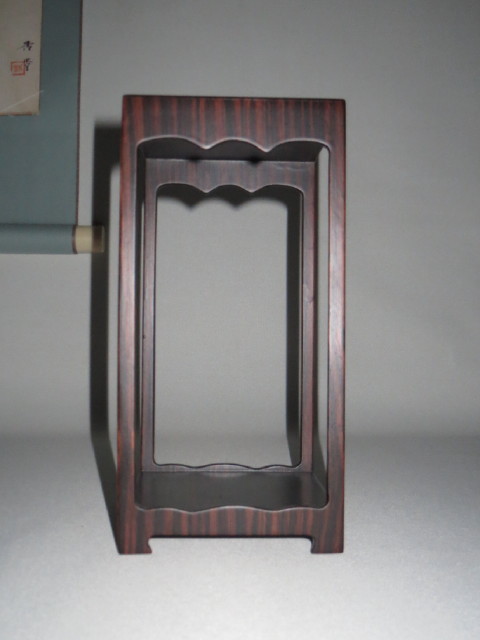 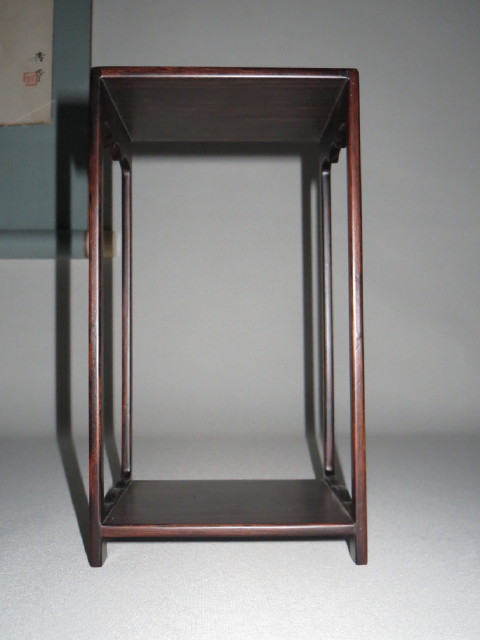 The stand is made from Ebony.

See your point, I usually style my trees with the negative space in mind and adjust the apex accordingly. We may agree to disagree

That is a nice table, and so simple. Seen from the front very expressive (for want of a better word) with the little skirts on the top and bottom.

We could agree to dissagree.... But to be honest do I think you gave this parallel reply, because you did not really read my reply....

Well Yvonne I like all of them except perhaps No 16 - not so keen on that stand.

Definitely one of the taller cascade stands and the longer scroll though.

PS thanks for starting this thread, you've got me obsessing about shohin display now which is not something I'd thought about much before!

arihato wrote:See your point, I usually style my trees with the negative space in mind and adjust the apex accordingly. We may agree to disagree

That is a nice table, and so simple. Seen from the front very expressive (for want of a better word) with the little skirts on the top and bottom.

I gave you one reply, but I can do better....To make a believable tree, will the top need to the same direction as the way the tree grow out of the pot...what happens inbetween with the trunk and the branches is a another story...collected material- personality- etc.

The Little skirts on the stand is not the front but the sides, as shown in the displays...the stand is a mordern styled blend between a tall stand, and a furniture used for traditional Tea ceremony....the open patern is in the sides like this.... I use for a suisekistand 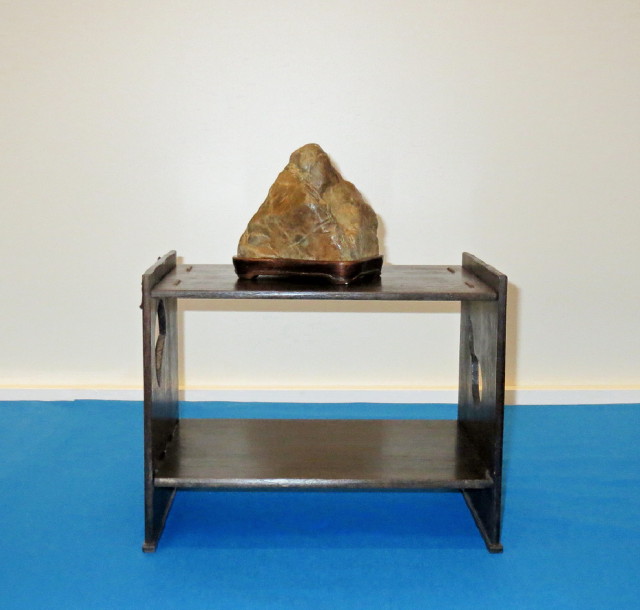 After looking at the photos many times, am I now for the nr. 14.
The jitta does a kind of facinate me, as it look like a flat open plane...next to it, is the sharp cliffs rising with the tree kaskading dawn, clinching to a stone.
This display do not need a scroll or a kusamono...it pretty much speak for it self

I had hoped for more response to the displays, the possibility to play around with many stands, and share many opinions....also the nr. 14 witch I like a lot, it is a light display I have not seen any were before, it could be very easy be called wrong...

I have send my entry, and it is not one of displays on this tread

Hi Yvonne,
I also think 14 is the nicest .
but for me the colour of the scroll is too strong.
a paler one or a more bronze colour would fit better.  my eye was instantly drawn to the scroll and not the plants.
As a ceramic artist , I do get drawn to the stongest colour on the display 1st .


but the display has to be how you interpret things.

The display are unusual, most of all inspired by my love to suiseki....it is like a dohadisplay to me...
I will be back with a new photo in the end of the week...lets see what a another collor will do the the display.

When are you showing us the photo that you entered?

I am not going to show it before the exhibition, as some visitors at the event will think they already had seen it, and I dont want to spoil the fun of seeing a new display.

The event was the previus weekend, and my display ended up being this 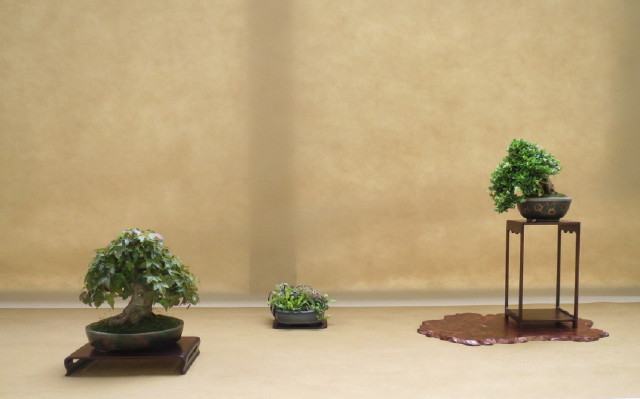 I feared the pot for the acer would be too dark and winterlike, but it gave a nice cool shade-look in the warm room

The lonisera was awesome with the small flowers...the scent was sweet lemon 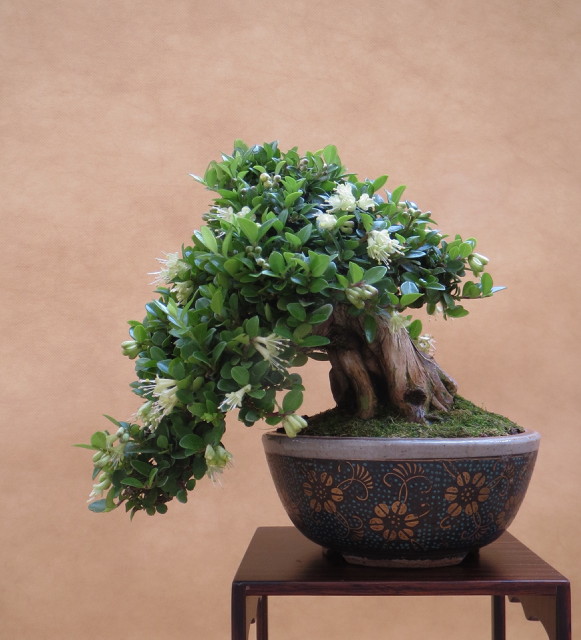 on the last day...a 3 days event...had the kusamono grown too big, and I borrowed this small kusamono from my friends from Holland...I liked this look very much 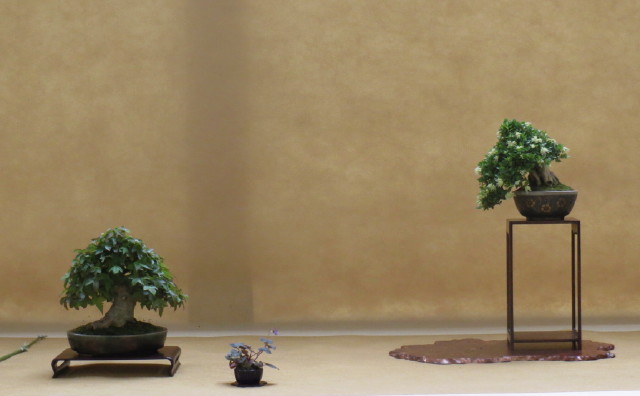 Yvonne Graubaek wrote:The event was the previus weekend, and my display ended up being this

I feared the pot for the acer would be too dark and winterlike, but it gave a nice cool shade-look in the warm room

The lonisera was awesome with the small flowers...the scent was sweet lemon

on the last day...a 3 days event...had the kusamono grown too big, and I borrowed this small kusamono from my friends from Holland...I liked this look very much

Hi Yvonne,
Thank you for posting your journey.
The final images to my eye are very pleasing.
Like most thing in life, "input = output" Your attention to detail and constant refinement has resulted in a "home run" Well done.

Always nice to have a reply, I am pleased you liked it

to create a display, is not easy at all, so many things can go, or be wrong.
The display was very much appreciated in Wroclaw, and the lonicera was a darling to peak during the weekend, everybody loved it.