Also, I'm probably just missing something, but I can't think of any examples of European white pine... . Is it just me? Or are there any, and are they being used? I see posts about mugo, scotts and black pines... What am I missing? 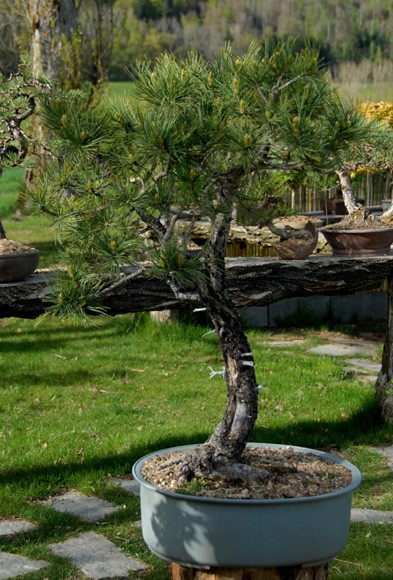 abcd wrote:There is no white pines in france , only one species with 5 needles : pinus cembro ( arolle pine ) who is growing from 2000 meters to 2500 meters.

Pinus CembrA you mean, being the exact latin name, if others wanne look it up.

in Austria, we have only one species of five needle pines, Pinus cembra.

It grows very high up in the mountains, and good specimens are hard to find.
Collect after they so 5 years to establish himself in the valley, then they make very little growth.

The long needles are at the beginning of a problem, but they are shorter with age. 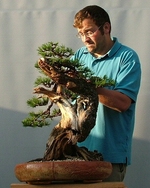 I guess a year and two months doesn't really count as "soon"...lol. Well maybe it does in bonsai terms!

Anyway, here are some of the native Rocky Mountain Limber Pines a friend and I have been collecting. These are a few of my favorites. 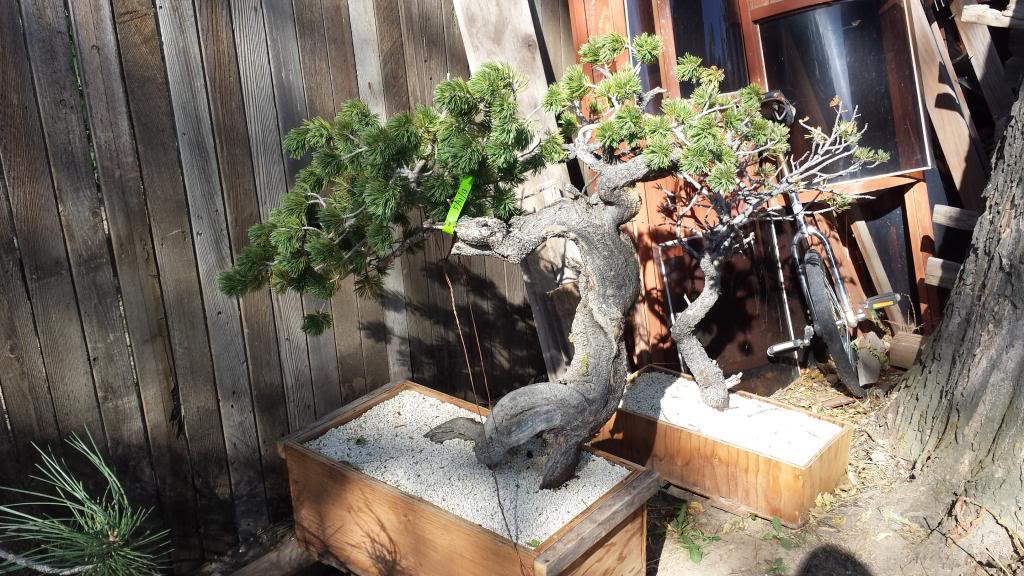 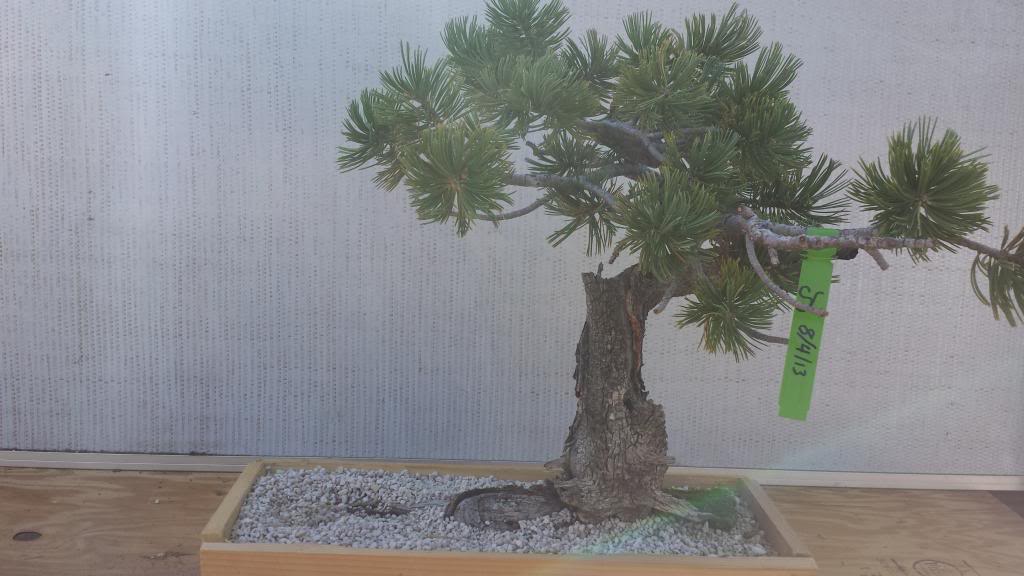 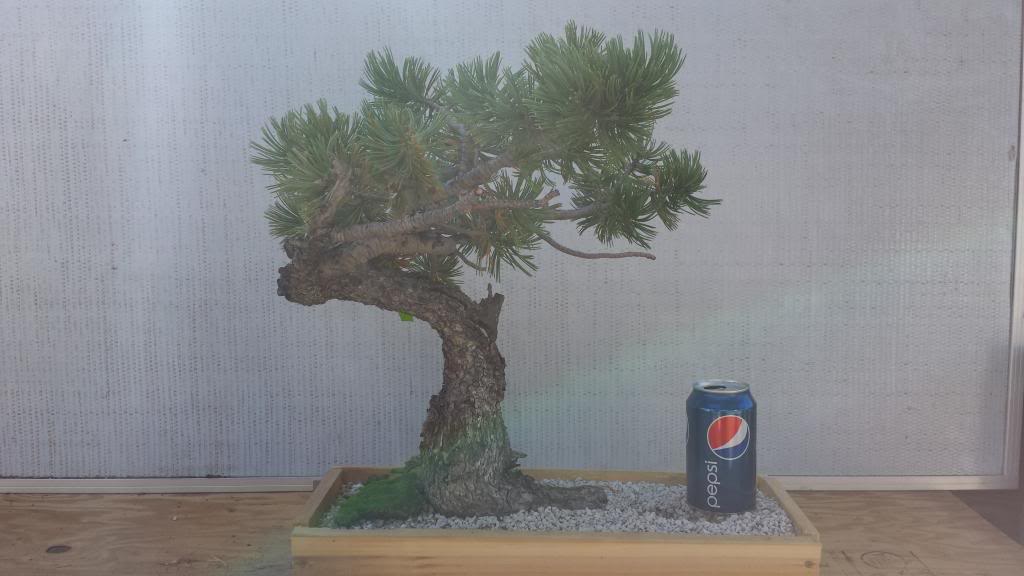 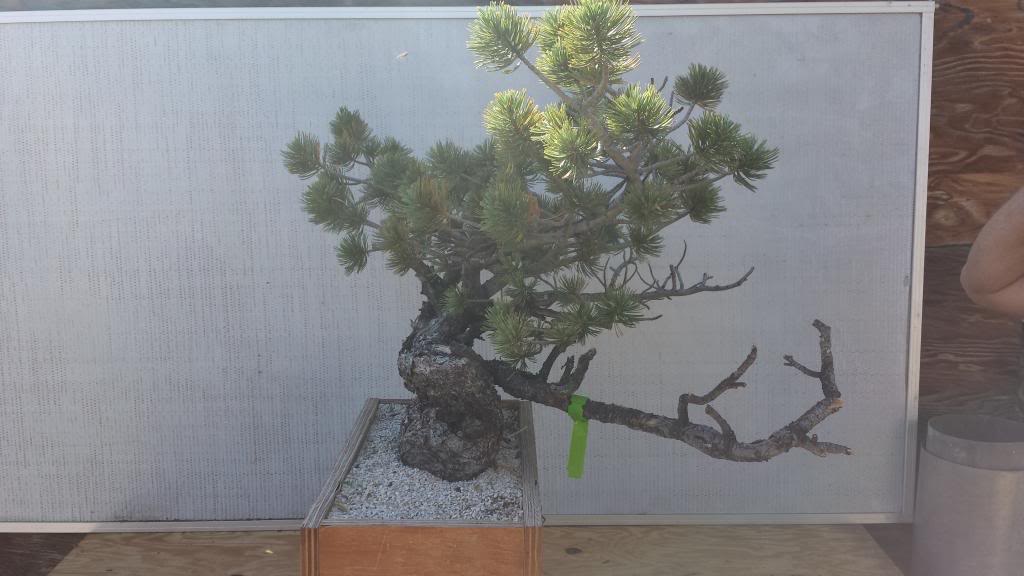 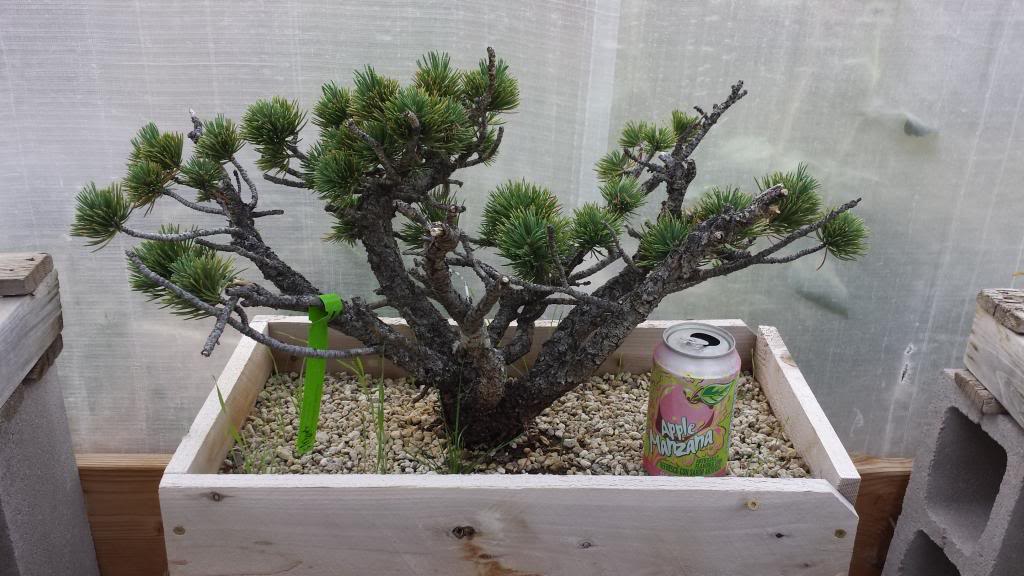 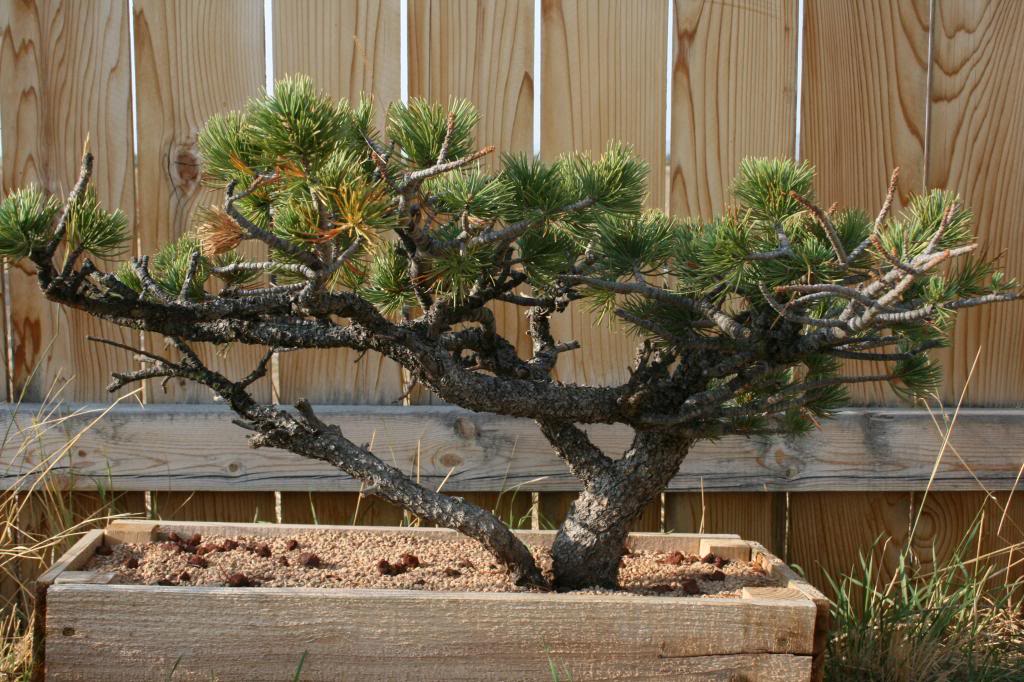 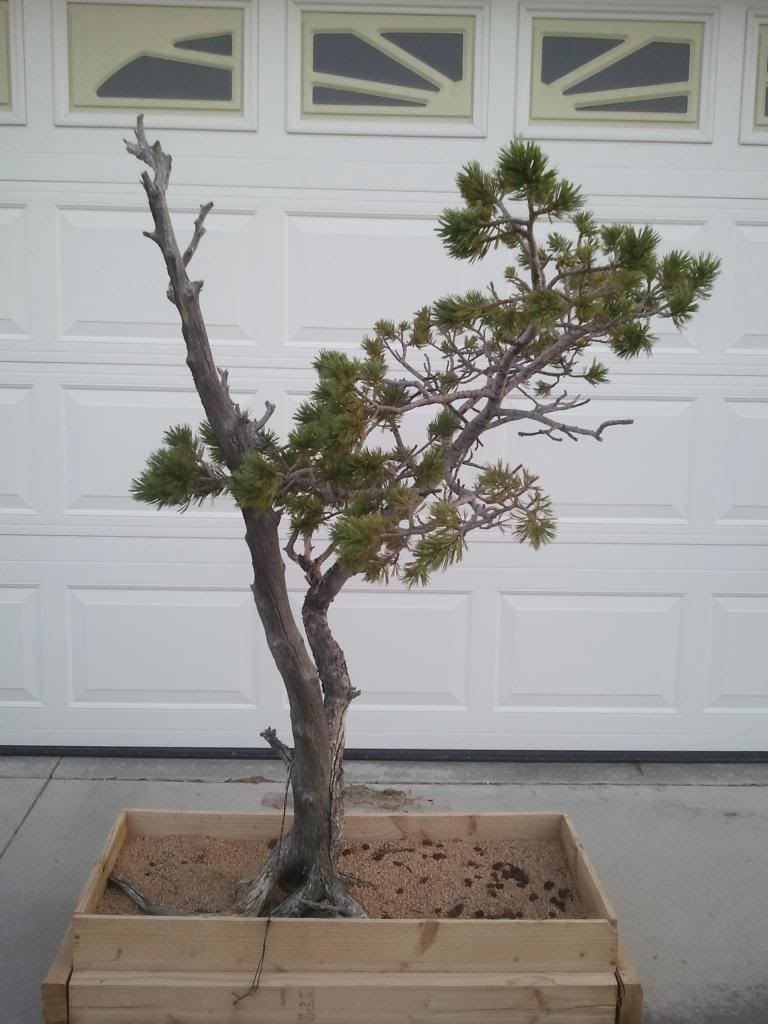 there's southwestern white pine (Pinus Strobiflora) that you could try. I've read that you can treat them like japanese black pine in terms of needle reduction and back-budding. unfortunately, I don't have any examples to show you.

Eastern White pines grow in my area but I find little interest in them for bonsai. They are very long needled and have smooth bark until much older. Of an interesting note though, when America was a colony of Britain the White Pine was a protected species that had value as masts for sailing ships. The King assumed ownership of the best of the Eastern White Pine trees and appointed Surveyors of Pines and Timber to survey the forestland and mark all suitable trees with “The King’s Broad Arrow”, a series of three hatchet slashes. There was a fine associated with illegally cutting these trees. This angered the colonists and ultimately led to "The Pine tree Riot" in April of 1772 where a Crown Sheriff and his deputy were assaulted after arresting an offending mill owner. 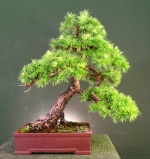 see Wikipedia for a list of Pine species
http://en.wikipedia.org/wiki/Pinus_classification

sub genus Strobus is the group that includes both the Japanese White Pine and the American White Pine. There are at least 27 species in the subgenus Strobus, maybe more that Wikipedia missed. This is the relevant part of the post, the rest is my rambling. I'm avoiding house work right now. (In the vain hope some else will do it thinking I am busy typing something important

While each species has its own quirks, in theory just about any pine can be used for bonsai. Some are definitely better than others.

I have P. strobus, and P. flexilis, and have killed every P. aristata I have attempted. All are young, still in the nursery can stage of growing as bonsai. I have not taken pictures yet. Two years into growing P. flexilis, I think its willingness to back bud will make it better than P. strobus in the long run. Also foliage is more dense. My strobus tend to look wispy.

Search for threads on American White Pine, P. strobus, and you will see good examples, and examples that show the problems with this species. Good ones are quite good. Others, not so much. Biggest problem for me is long needles and smooth bark that just does not develop any character. Difficult to get taper too. Smooth bark is a problem for Japanese white pine too, until you get the first 50 years of growing out of the way.

This Wikipedia list might also be useful to those who were looking for a white pine that could be grown in the tropics. For example, there are a couple species native to Vietnam, and other tropical countries. I know nothing beyond what Wikipedia says, but it is a clue for those who would like to experiment; P. dalatensis - Vietnamese White Pine & P. eremitana - North Vietnamese White Pine

I have a couple P. strobus that I have been trying to grow for bonsai for a decade or so. One looks like it will eventually (another 7 to 15 years from now) become a convincing tree, for the other 6 that I have, the quirks are bad enough that I think I am going to use them for grafting understock. Maybe put Japanese white pine on them. P. strobus does have a very hardy, durable, cold tolerant root system. Tolerates wet weather better than western Pines. Not as drought tolerant as western Pines. Winter protection can be minimal in zone 5b. Just put them in the shade, off the top of the bench, out of the strongest wind, and that is about all that you need to do.

I have noticed a number of the nurseries supplying rock garden and conifer aficionados with grafted trees that there are dozens of P. strobus cultivars, many listed as dwarfs and a few weeping and contorted cultivars as well. I noticed a few have descriptions that say they have short needles. Some of these might be worth exploring. I have not seen any P. strobus noted as having cork bark.

There are also dwarf varieties of P. flexilis listed in some nursery catalogs, those might be worth looking at too. I have not seen any nursery material grown with bonsai in mind, so expect grafts too high to be useful and other problems.

I am trying to learn to do grafting, I am at about a 20% success rate with about 12 attempts under my belt. Once I get confident with my grafting, I may pick up some of the rock garden / conifer collector cultivars and try my hand at producing low root grafts suitable for growing on as potential bonsai stock.

I am always enthusiastic about using species that are not commonly used, but at some point, you really have to go back to the Japanese White Pine and look at its strengths. You can't beat it for a lot of traits. Great for cold climates. Most grafted varieties have shorter needles and blue - ish needle color, some are very blue. Many back bud reasonably well. There is an established literature detailing care techniques, you don't have to guess. JWP has a lot going for it as a species for bonsai. Most USA native white pines fall short in one category or another that JWP is superior in. It is a good species to work with.

JWP does not tolerate heat very well, so it fails in the southern half of the USA. Here the limber pine (flexilis) and the SW white pine (strobiliformis) take over, because they can take more heat. I don't think any USA native white pine could tolerate living in Houston TX, (but hey, I couldn't live there either

) Here is where I would test that P. dalatensis from Vietnam, but does anyone know where to get seed? Most of the USA white pines are either from mountainous, higher elevation habitats, or from northern, colder climates. As a group drought and heat are not something they seem to be adapted to deal with. The limber pine will tolerate more heat than JWP, but they won't tolerate Houston.
Sorry about rambling, and the trick didn't work, I was just handed the mop. Bucket will be on my head soon if I don't quit typing.

Thanks for the great replies guys. I have a couple of small Bristlecones I've been growing out as well. I'll update this thread as I learn more about these.

I've worked on a couple of limber pines at Michael Hagedorn's place too; I'm looking forward to see how they develop.

I have tried Western White Pine (P. monticola) with little luck. it was a 60 cm tall collected specimen which grew well, but did not like to back bud. It ended up back in the forest - different location.

I have a Bosnian Pine (P. heldreichii) from nursery stock. It has grown well and tolerates repotting well. This summer I decided to cut the bush back and style it as shown in the picture below. We will see how it reacts this spring and if it back buds more than in the past which will be needed if it is to develop. The bark roughs up in a reasonable amount of time. 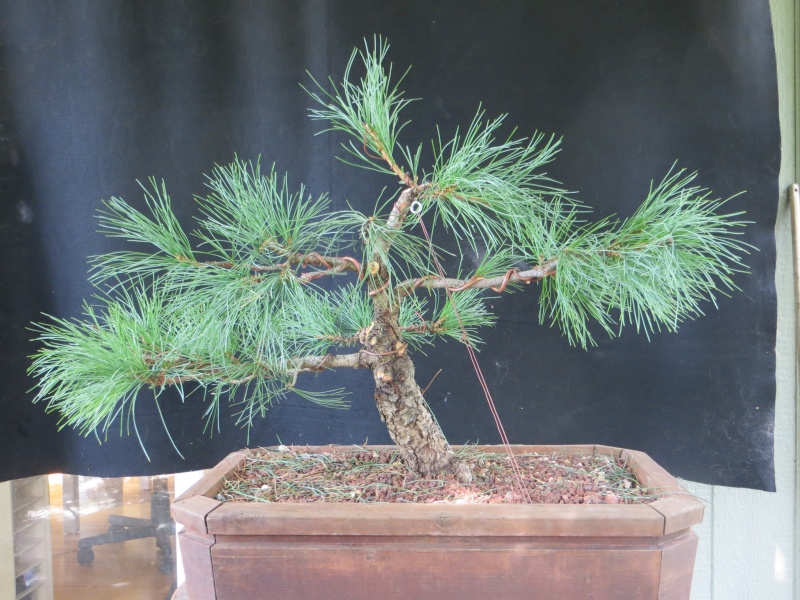 I work with Pinus strobiformis, SW White Pine (and owe Dan W. a picture). I've had it about 15 months. The tree grows and backbuds well. I treat it like a JWP.

I'm in the humid region near the Chesapeake Bay and use fungicide once per month during the growing season and lime sulphur in the dormant season. The tree uses a large amount of water (for a pine).

Here's a Limber Pine I worked on recently: 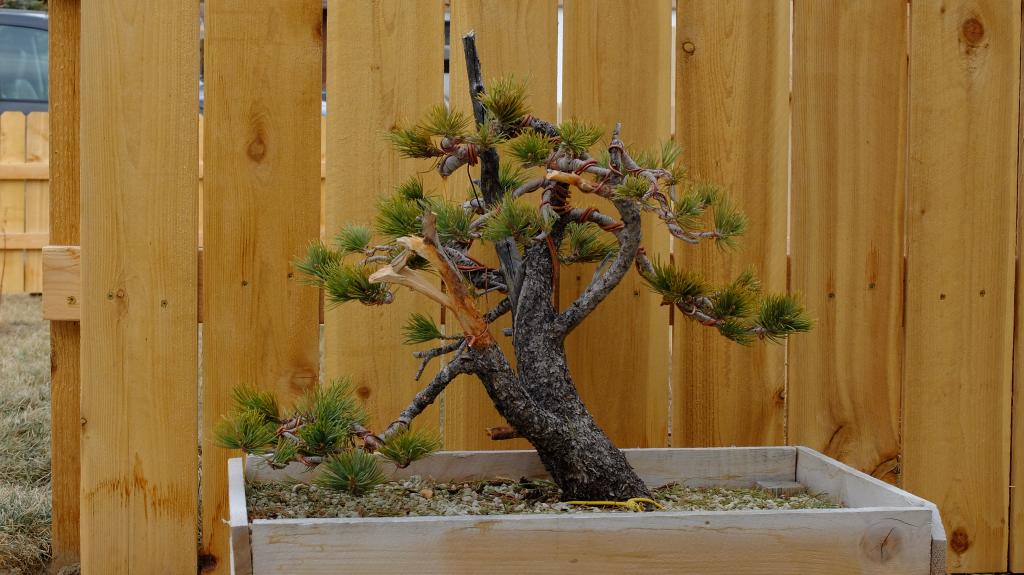 Bristlecone have 5 needles. Does anyone have any information on them pertaining to them?

Hi Mike, I don't have much information on them. I know a few guys in Colorado who've collected some. Larry Jackel has probably had his the longest. He's the curator for the Bonsai pavilion at the Denver Botanic Gardens; you might be able to reach him there, or through the Rocky Mountain Bonsai Society. I have a couple of nursery trees, but haven't worked on them yet.

Thanks Dan. I always have to ask you know. I believe I've seen the ones you mentioned on another forum. I just have the one nursery stock Aristata. Just checking. Thanks.