kora wrote:...and if the person in charge or the exhibitor chooses to deviate from the Japanese norm, that should be ok.

As I am a Japanese, living in Japan there is no choice for me to deviate from Japanese norm.

I personally have never used a scroll for my display in an exhibition and perhaps I won't use it from now on. Actualy I confess I don't have any scrolls at all.
As tony and kora mentioned, I have also never seen a single display with a scroll at Kokufu-ten as possible as I could remember. On the other hand,
there are some display's photos with scrolls at Gafu-ten on a Kindai bonsai magazine.

FWIW, here in Japan in exhibitions scroll should be used for shohin display and the display has to be hira kazari (flat display..means three pieces bonsai display or alcove display) not tana kazari (rack display) In this case, I think Jim's first photo is quite appropriate. Though I don't see the scroll's painting well, it looks calm and the scroll's size fits in this display…it would be better the scroll position is a little higher.

I am not saying "Do follow Japanese" but learning basics contribute you to more fully-developed display otherwise the display without basics gives its viewers just a plain dull cluttered image and I believe it can be said at any kind of hobbies.

Nekotoban, thanks for your participation. one of my disappointments in similar chatlines on the hobby of Koi was that we never ever got to have input from a japanese resident. So it's nice to have your insight here.

It was valuable to have the insight from a Japanese hobbyist here, thank you Yumiko.

Just to add to Kora's first hand experience - the only Japanese bonsai exhibitions where we have seen scrolls used are at specialist shohin exhibitions, or as Kora will know, occasionally at Taikan-ten.
We have never seen a scroll used at Kokufu-ten either. Companion plants, small bronzes (tenpai) or suiseki seem always to be used.

Scrolls seem to be hardly used at all now at top European exhibitions like the Noelanders Trophy. 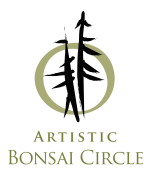 Could i get some comment on suiseki display. Any chance there, that scrolls could find a presence?

marcus watts wrote: My observation are that at shows the accents get very little attention anyway, and mostly by gardeners.

I don't particularly agree with that - case in point being the enormous popularity of a recent show dedicated to accent plants.

you missed my point Fiona - there was a very enjoyable accent show - I was there these were very showy accent / mixed plantings that were there as fantastic display items in their own right - the vast majority were not suitable to accompany a tree exhibit as they were too big, too tall, to complicated etc - (An accent plant should not really be taller than the stand the tree is placed on if you want to do it absolutely properly) . My observation of the magical accents show was a series of great displays that were the star of their own show and nothing to do with accompanying a bonsai tree. -

marcus watts wrote:A simple test, look at all the show picture threads on here - trees dominate as that is our primary interest.

And now it is perhaps time to upset the apple cart slightly. The following is just MHO, but if we look at quite a few of the show threads on here we will find that at the bulk of them there is some attempt to display the tree using at least an accent plant and sometimes and/or a scroll or background picture.

I again didnt say the exhibitor did not attempt to use an accent - they had too as this is often required for entry - I said our interest is primarily the tree - ie us....the viewers of the thread and hobbyists - most pictures from the shows concentrate on the trees of course, the photographer either zooms in or crops out the accents as the real interest is the bonsai, and fitting everrything into the frame would be difficult too. I see the accent essential if it is a correct one, but a poor choice if it does nothing to the overall display

Just an alternative view as I see home display, public display and judged tree competitions all could have different needs

Actually I was really saying that the only thing in your very good post I didn't agree with was your contention that accent plants at shows get little attention as this is far from my experience, to the extent that I have been at shows where the accent plants got more attention. The reference to the Magical Accents shows was merely to suggest that were there not an interest in accents then that show would not have been as popular as it clearly was. But if yours has been different then heyho - maybe the "truth" is somewhere between our two experiences.

Regarding the other point you highlighted, all I was trying to say is that in some displays featured on here the trees don't get a chance to dominate as they are subject to the very clutter we both agree is wrong. I wish we could see trees dominate all the time as I completely agree they should be the focus of the viewer's attention. So often an excellent tree is lost in among the other paraphernalia and that is to its (and the viewer's) detriment.

dick benbow wrote:Could i get some comment on suiseki display. Any chance there, that scrolls could find a presence?

By now, do I think it is safe to say, we close to all deslike a forrest of scrolls hanging from diffrent hights in an exhibition. And we should all be pleased about the arrangers of exhibitions who takes care of that, and say " no scrolls"
Never the less, do I think a scroll or two, in a long line of trees or stones in an exhibition, does make a nice diffrence.
This could be done, if the participaters who want to use a scroll....leve the scroll on the table....A person choosen by the arrangers could then deside witch scrolls is appropriated, and can be exhibited....this scroll would also have, to not clash with the neighbourtree or stone.

In ESA exhibitions ( European Suiseki Association) is it banned to exhibit scrolls....what I previus said here, could be used too, as a appropriate scroll does make a nice diffrence ( maybe it does).

I have seen photos from a japanese suisekiexhibition, were the stones was standing close together, having a small acces between them. It looked like the accesplants was premade to the exhibion, by the arrangers.

Natural stones can have a " ruledirection"...but at the same time draw the eye of the viewer to the other side...In this case do I find it confusing, if the exhibitor then place an accent, and maybe a scroll too, to underline this rule.
In a case like this, will I always just show the stone on a nice stand, and leave the viewers to enjoy it, without forcing a direction on the viewer and the stone, with a powerfull tiny acces.

This stone is a good example 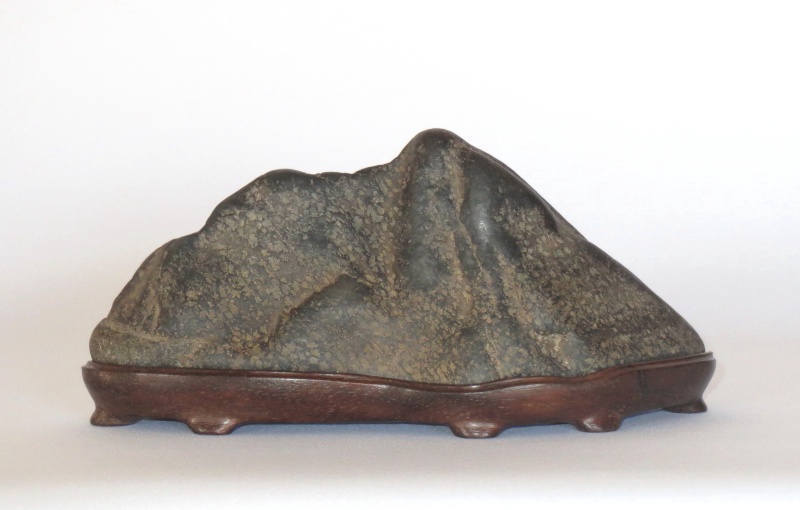 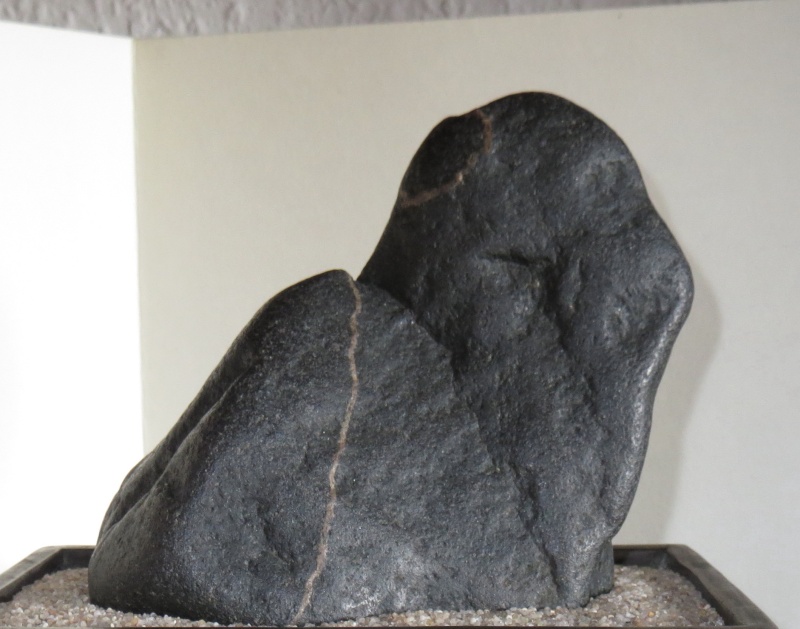 It is a twopeak mountain, with a clear direction...the acces schould be placed in the left side.

BUT...the stone is even stronger, also the Mythfigure KAPPA, and If I place the acces, maybe a tiny wateriris ( kappa lives in swamps) and a nice little brass cucumber ( kappa eat cucombers only) in the stones flowdirection, will Kappa turn its back on the goods, witch is confusing for the viewer.

This is a stone I also would exhibit alone, on a nice stand....because if I place the goods in the front of the stone, it could look less tasty, And be a little too playfull for me.
In my home could I find it funny for a little while, but not in a exhibition.

How the rules in suiseki exhibitions actully are, do I not know anything about, as I have not seen anything written. My guess is, it is up to your own taste, and what the arrangers allow.

thanks Yvonne. looks like my head over heels effort to acquire art and scrolls will end up being more for my own use and enjoyment.
So far I've only been invited to a show for each, one for bonsai and one for suiseki.

Interestingly enough, yesterday when i picked up my latest shikishi board with japanese written phrase "wind< the whirling sky is calling out", the artist (japanese herself) asked how i would use it. as I dsicribed the bonsai, scroll and companion plant, she told me that "less is more" and not to make the display too busy. It left a strong impression.

I too have lovely shikishi at home, I enjoy them very much...One of my loveliest is a square shikishi with a large kanji in kyoto-red.....After I bought it, did I ask what it said.....the ansver was "this shikishi can you use on newyears eve, the year the rooster becomes the next chinese sign...every 12th. year" I just cant wait