While rummaging through a landscape nursery, I ran across these two Amur Maples. They had been tossed aside and took root where they were left. They were about 15 to 20 feet tall at the time of collection. It took several hours over two days to dig them out. I ultimately needed a tractor to lift them into my trailer. The root balls were several hundred pounds at the time of collection.

The first two pics were taken right after collection. 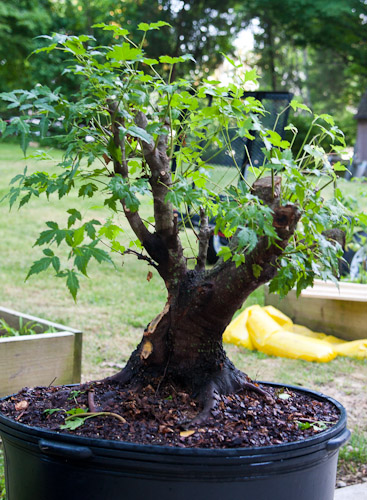 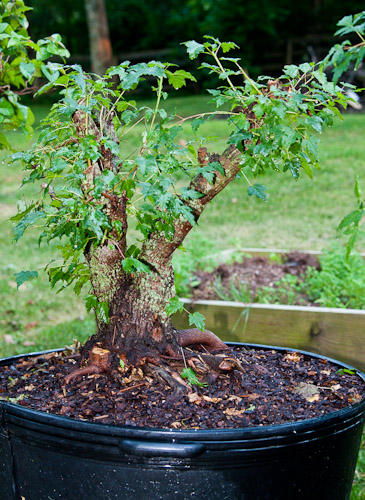 I will eventually expose more of the nebari as finer feeder roots begin to fill in.

You'll see why in a moment. 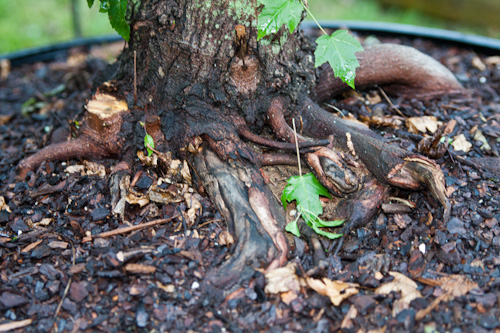 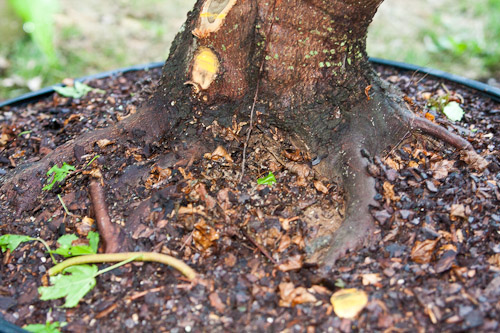 I left them alone (for the most part) during the first season. Amurs grow like weeds. But, I also left them in their collected soil, so I knew I needed to repot them this season. John Calloway was kind enough to help me out. It took both of us just to slide the pots over to a clear working space. 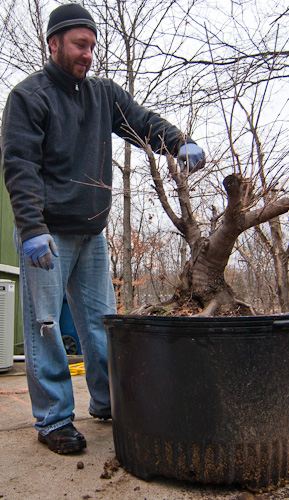 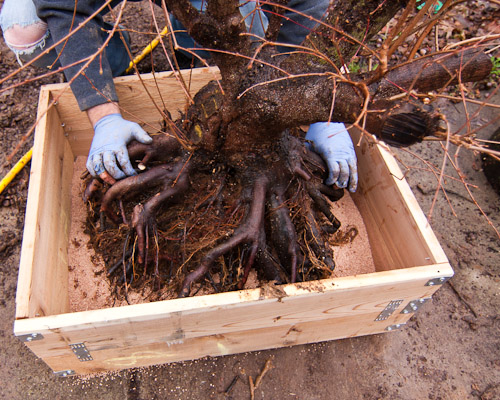 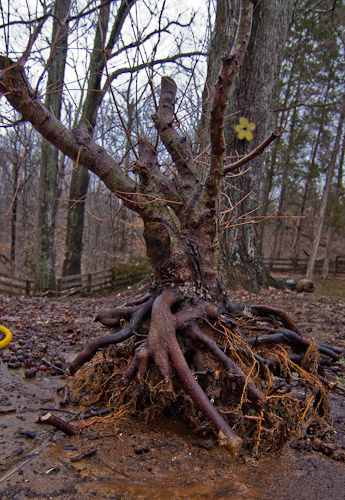 I thought I built the boxes too big! They are 30 x 24 x 12 inches and the stumps barely fit in them. 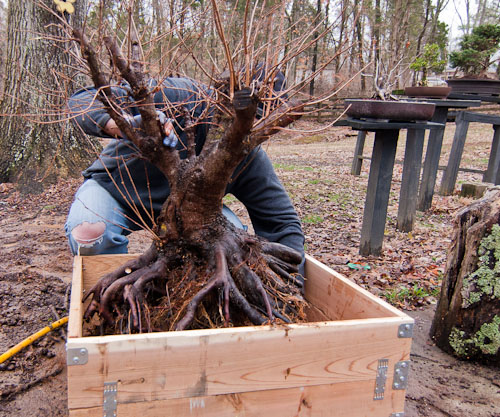 The finished product. Planted in one hundred percent turface. They'll be left alone for a couple of seasons. Hopefully they'll develop the fine feeder roots I need to bring the nebari in closer to the trunks. Will eventually reduce the trunks as well. But, for now, it's feed, feed, feed, water, water, water. 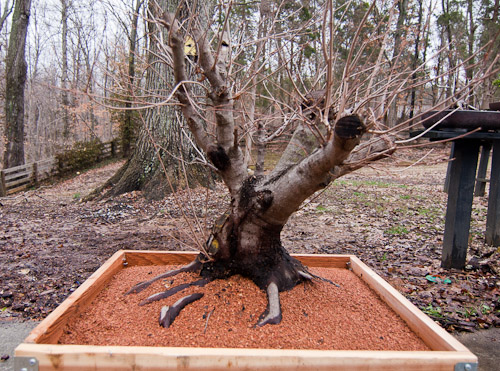 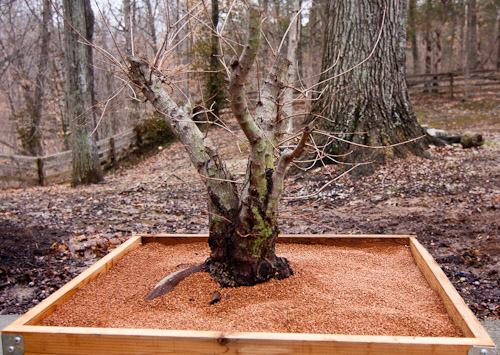 Hi M.T., great find.I am sure the fine roots will develop easily and swiftly.

The only thing I would do is refine the heavy pruning, there is for instance 4 and 5 big trunks you could decide now which way to go and remove the unwanted. This would concentrate the power and growth where you want it and callasing would take place in the time you are developing the roots. they are going to make fine powerful trees

nice material. what do you feed, feed, feed? and frequency?

Rex, I'm mulling that over right now. I will probably apply a slow release fertilizer (like osmocote) and feed it with a liquid fertilizer weekly at half strength til mid summer. I use several different liquid fertilizers. No reason for that. I just have a bunch of different brands of varying concentrations. In late summer I'll switch over some thing nitrogen free.

I haven't cut the trunks back largely because I haven't decided on what I want to see down the road. Still mulling that over too.

As of this morning they are both pushing buds and new shoots everywhere. Very aggressive trees.

Lovely! Good luck with these.

these are going to be great.

Nice find! Working in the nursery trade, I come across a lot Amur maples. I have some Acer ginnala 'Emerald Elf' growing in the ground for 6 years. For some reason Amur maples don't offer the same feeling as Tridents but they sure are cold hardy-even the roots.

Good luck with your tree!

Thanks Gary, I would have said just the opposite. I find tridents so common as to be rather pedestrian. Not to say there aren't many impressive tridents. Just seems there are so many of them they don't really grab my attention as much as stuff you don't see that often.

I think Amurs have to be large to work. Something about their leaf shape. They don't look as tidy as tridents do in dense foliage pads I think. Especially on smaller trees.

Anyway I wanted some thing massive and these were just too hard to pass up. I have third one just as big as these two. Similar story, except I needed a fork lift for that one and it a crater in the ground after it was dug out.

Wow, great to find such great material. I really like amur maples but have not found any large enough to do anything with. I have a few small ones in the ground waiting for them to gain some size. I will be following you for a bit to find out what nurseries you are frequenting. 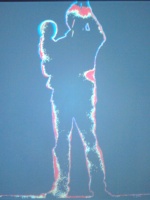 Michael T wrote:I think Amurs have to be large to work. Something about their leaf shape. They don't look as tidy as tridents do in dense foliage pads I think. Especially on smaller trees.

Anyway I wanted some thing massive and these were just too hard to pass up. I have third one just as big as these two. Similar story, except I needed a fork lift for that one and it a crater in the ground after it was dug out.

Very nice find!!!!! I have a few in the ground right now but it will be awhile before they are ready to remove. I do have an old container grown one that I've been playing with. They are impervious to our climate and they can be cut back quite hard without much problem at all. (the one below was trunk chopped right at the "v" many years ago). I'd make the large trunk chops as soon as you can since they are kinda slow at healing over large cuts. Yes, the leaf is a bit larger than tridents and definately give a diferent effect but I like the Amur none the less. Over the years, I have enjoyed this tree during the winter because of the bark and twig structure and Just as it begins to bud out in the early spring. I'm sure you'll love working on your great finds over the comming years. 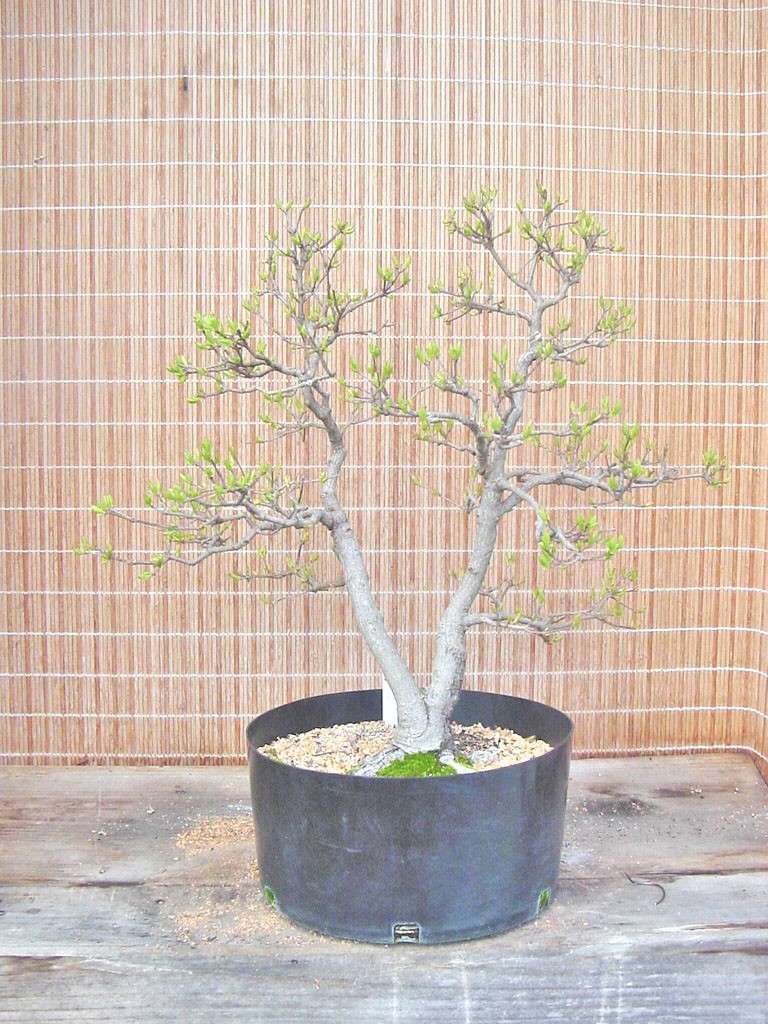 Jim Doiron wrote:Wow, great to find such great material. I really like amur maples but have not found any large enough to do anything with. I have a few small ones in the ground waiting for them to gain some size. I will be following you for a bit to find out what nurseries you are frequenting.

I make a point of dropping in on landscape nurseries when I travel. First thing I do is ask if they have a trash pile. It's where they throw the broken stuff and its also where stuff gets left to heal in the ground. These two were growing in a landscape nursery in the middle of nowhere Kentucky right next to the trash pile.

I also find out where the tree farms are by asking local retail nurseries who they buy from or by picking up business cards at garden shows from wholesalers. Doesn't take much to get them to let you walk the fields. I have another Amur that was dug at a wholesale nursery. They were going to throw it out because it was much too big for sale. It was a 15 to 20 feet tall. So, I told them when they dug it up to ball it up and I'd take it.

They dug it, wrapped it in burlap and wire cage and put it in the van by forklift. Free of charge.

Of course, my wife wasn't very happy when she saw a 4 x 3 foot root ball in the back of the family van.

It was so heavy I had to sit on the root ball while it was in the van, straddling the trunk just so I could rock it over. When I got it over I laid on my back and kicked it out. From there I spent several hours cleaning out the root ball.

Needless to say, I now fully appreciate why good stock can be so expensive.

Thanks for the info on locating you material. That's a great story about the large one, that would have probably been the one that sent my wife over the edge. I need to move to a place with a larger yard before I can collect anything of that size anyway, hopefully soon. Good luck with these.

Well, I promised I wouldn't trim them, but one month later and the shoots were extending out three to four feet and its only April. So, I trimmed them a bit. 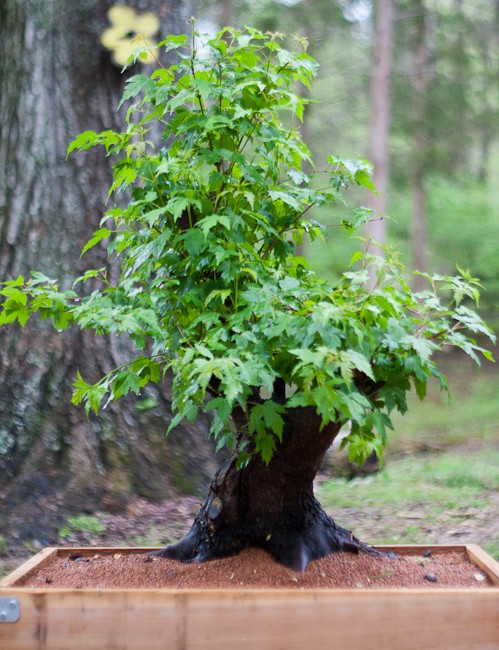 Man they look good. Worth every bit getting them home. I was out at a nursery in the middle of nowhere the other day and thought I might pick up something good in their trash pile but no luck. It's a little late in the season anyway but I thought with all the rain it might just be ok. Hope to see these in person some time.

Here's the second one. 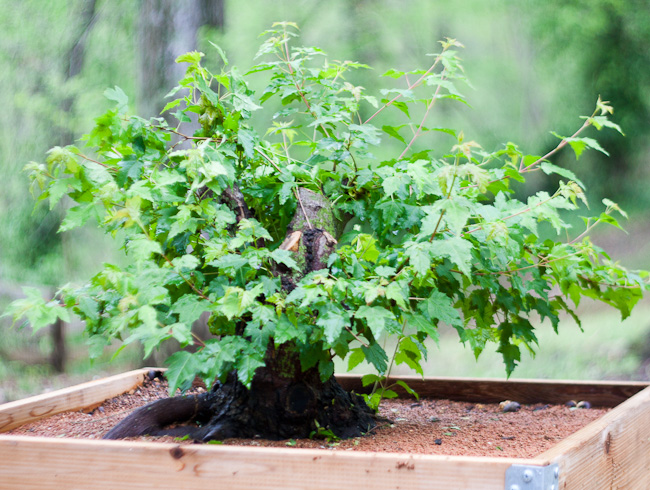 Good luck...they will be great in time.