I just got this overgrown former nice bonsai on discount, Its so rootbound its no longer putting on much growth. I may slip it into a larger pot now but since its dead of winter here in zone 6/7 I wont disturb the roots or prune it much till the active growing season. My question is whether anyone has experience with schefflera root disturbance, Ive already emailed russel for his opinions as he has a giant schefflera as well. My plan is to reduce thickness of rootball and untangle those large long mature surface roots so that I can drape them over a rock/driftwood/wire frame to make the roots more attractively radiating outwards rather than circling the pot. This would also give the illusion of a taller trunk similar to what they do down at fuku bonsai in hawaii to form what they call "root trunks" as can be seen in some of the ABS magazines Should I do my branch chops first before disturbing roots so that I will get stronger back budding and then a couple months latter defoliate and do my drastic root work? will big roots cut sprout feeder roots or will the whole root die? In terms of styling Im shooting for a banyan style like russels tree. As a result I will have a lot of cuttings 1"x 20", any advise on rooting them? thanks. 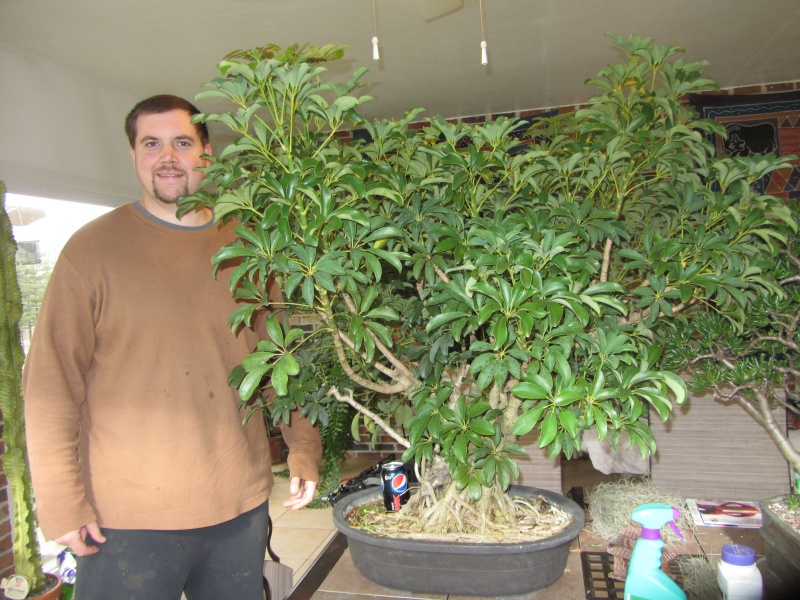 Very nice! Is that a dead Scheff. that I spot in the mix?

I think in the heat of summer you could chop away at top and bottom without much worry, just be sure of warm/hot weather for a while to allow the plant to recover. Untangling will be a real challenge.

yes there is a trunk that is dead, but only one side of the trunk is dead, there is a vein on the back keeping a small branch alive that I would like to keep if possible. In terms of untangling, I mainly mean the outer 2 inches where those real fat roots are piled up. maybe ill just cut off any fat ugly roots and repot it at the current height/soil level as i like the mass of roots just not those big fat ones that run along the wall of the pot. In nature they dont always radiate perfectly out from the trunk like spokes on a wheel anyways. thanks for the feedback. So billy your just saying chop the top and bottom at the same time like russel did with his? it seemed to work well for him.

I did ALL of what you're asking in July - hot as hell here. I reduced to rootball down to almost nothing, and the branches were all cut back so hard there was no foliage. I can't find a single instance of root dieback, and every cut branch popped new growth.

The surface roots near the trunk are pretty, and I wouldn't mess with them. The ones against the edge of the pot are the spoilers. Like Billy, I don't think you'll have a lot of luck untangling them because they are so bad about fusing where ever they touch. But - nothing ventured, nothing gained - right?

I wouldn't bother with slipping it into a bigger pot now, or really doing anything else except fertilizing until warm weather. As for rooting your branches, just cut the tips back a little and stick them in some dirt!

I had to bring my tropicals in Monday and Tuesdaybecause of freezing weather. Wiped out my banana collection (foliage), but didn't seem to make a dent in the mosquito population, even at 25. Everyone went back outside yesterday.

Glad you got the picture posting worked out!

May I grab this chance and ask a question...?
Russell, do you refer to bonsai schefflera alone? Or your description can be applied to a pot growing normal schefflera tree? I have a big one and I would like to experiment and start a prebonsai out of this. What do you think?
Thank you!

I'm not sure I understand your question, so this may not be the answer you're looking for but...

I have two small sheffleras that are planted on lava rocks that are over 30 years old now. They were purchased by a friend in Hawaii in 1976. These aren't the "dwarfs" (S. arboricola) like mine and Alex's posted here, but rather the full sized plants. The leaves on these are smaller then the palm of your hand, so even those big ones reduce dramatically. BUT, these were started as seeds or cuttings planted in the rocks and that's all they've ever known. I would assume that you can take a standard schefflera like yours and work it down just like I did to my arboricola. Just remember that they are big, course textured plants and your working against a lot! Starting that way you may never be able to develop smallish branches. One thing that I mentioned to Alex in an email is that they pop new branches right where you cut them, so you have to really think ahead and cut back hard so you can build back out. And they are so easy to root that you can really cut the roots hard, you just have to treat them like a cutting. They recover quickly, but I think it's best to do this in hot weather when they are growing the strongest.

I can see what you mean, Russell. So, since I consider myself a beginner, I choose to let my schefflera keep on being the way it is now, i.e. sprouting new branches with sets of big leaves keeping shade to other bonsai pots during summer

Thank you very much for your time.
And bucknbonsai thank you too for the... hospitality

I tried that and ended up with a bucket of stink. Guess I should have changed the water...

I said WEATHER not water. Rooting in water doesn't work well for me, I use pure vermiculite.

Ah, you sure did! Yes, I guess warm WEATHER and vermiculite makes a huge difference.

Has anyone had any luck reducing leaf size of dwarf umbrellas at all? i chopped a wild one back from 3 foot to 20cm and planted it ROR, and since then i have been getting erratic leaf sizes.

Yes, they reduce quite a bit. The one I started with last summer ( https://ibonsaiclub.forumotion.com/t7146-my-new-schefflera?highlight=new+schefflera ) looked a lot like this one, long branches and big leaves. After it was cut back hard and the root system GREATLY reduced the first new leaves were small, but as the growth elongated they did get bigger. I took that as a sign that it needed to be pruned again. I think the trick is lots of pruning and keeping them rather potbound. Obviously, if you need branches/trunks to develop it's best to give them some space and let them grow. I didn't feel I needed that with my tree, and I've been pleased with the results so far.

Russell Coker wrote:Yes, they reduce quite a bit. The one I started with last summer ( https://ibonsaiclub.forumotion.com/t7146-my-new-schefflera?highlight=new+schefflera ) looked a lot like this one, long branches and big leaves. After it was cut back hard and the root system GREATLY reduced the first new leaves were small, but as the growth elongated they did get bigger. I took that as a sign that it needed to be pruned again. I think the trick is lots of pruning and keeping them rather potbound. Obviously, if you need branches/trunks to develop it's best to give them some space and let them grow. I didn't feel I needed that with my tree, and I've been pleased with the results so far.

Thank you Russel, when it comes time for me to unearth my ROR ill apply your method, thank you.

Love that sheff by the way, too dry here for aerials im afraid

I guess it goes without saying that anything you keep potbound needs plenty of water, and should never dry out. Also, full all day sun keeps leaves small and internodes short. Mine will gladly take as much sun and water as I can give it.