I've got what appears to be some rust symptoms on a pear tree (callery pear, discussed in a previous thread) that I obtained earlier this year. Noticed some leaves with reddish spots at some point - not sure when, but initially figured they were just part of the seasonal change: 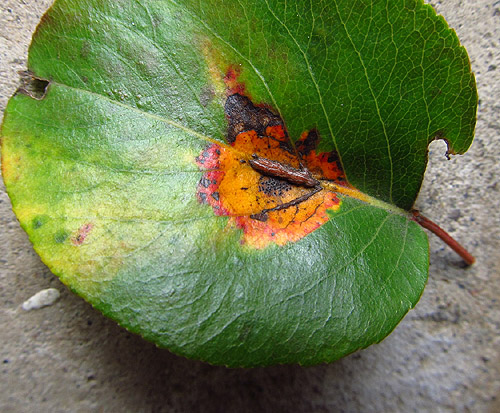 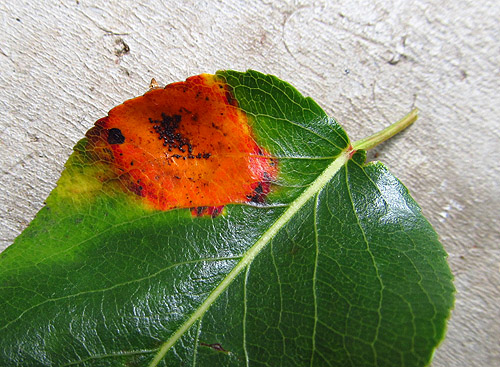 Now I know better...happened to catch a glimpse of the underside of those leaves and found these little monsters lurking: 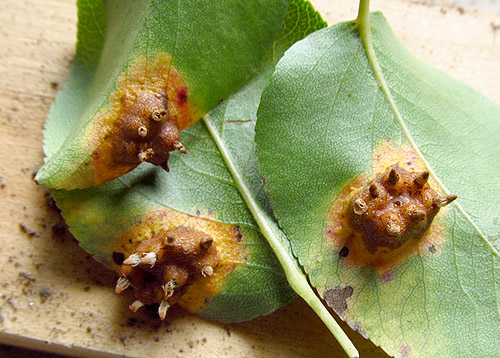 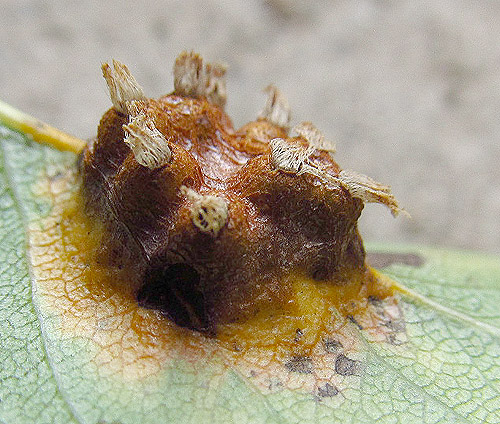 They're actually quite interesting looking. From my reading, it sounds like this is not likely to be overly damaging to the pear tree (only 4 leaves appear to have been infected). It looks like pear-juniper rust, though apparently there are many rusts that look similar. Has anyone else dealt with this? Any recommendations? I do have a bunch of junipers (shimpaku mainly) and one northern white cedar that I'll have to look at more carefully, since those (especially the junipers) might be the alternate hosts. Perhaps a dormant season fungicide is in order? Thanks for any suggestions,

Suggest you simply remove any leaves that show up with this before leaf fall. Then, in very late winter and again in early spring, give your tree an all-over spraying with lime sulfur (read the label re: dilution as a fungicide. Keeping these at least 100 yards from Juniperus virginiana or other junipers in your or a neighbor's yard also will help as it (probably) isn't one of your bonsai junipers causing the problem unless you've seen slimy "cedar balls" forming on them.
_________________
Jim Lewis - lewisjk@windstream.net - Western NC - People, when Columbus discovered this country, it was plumb full of nuts and berries. And I'm right here to tell you the berries are just about all gone. Uncle Dave Macon, old-time country musician

I would take the extra precaution of taking every leaf that pear drops this fall and burning them. Don't let anything incubate over the winter in the soil. Thats what we do with the sour cherries in the orchard.

Thats a NASTY looking thing you got there! Puts you right off your lunch

Jim and Jay, thanks for your suggestions. Will do the leaf clean-up (of course!) and dormant spray. Haven't seen obvious evidence of problems on any of my junipers. Not sure about what kinds of other junipers are in the area (or where), but I don't have a lot of choice in where I keep these trees anyway...

Jay, I think these are actually kind of neat looking - though they'd be more so if they were on someone elses tree! Hmm, now that you mention it...time for lunch.