....can someone explain what is the difference between ,,seki,, and ,,ishi,, ? Is it grammar, or system of classifying ?
vlado

Peter I think that you are not right because of , for example ,,sugata ishi ,, is not a hill, and ,,baika seki,, is not a stairway (to heaven...)

I am not certain, but I believe there are two pronunciations for each Chinese kanjii which the Japanese use for their language. Perhaps "Ishi" is the Chinese and "Seki" is the Japanese?

If we don't figure it out here, I'll ask when I'm in Japan in November.

Hello Vlado ,
Hello Mr. Wylliam N. Valavanis ,
Many thanks for You , but thoses knowledgeable about SUISEKI may help us understand right now , please ...
Thank you ,
Sincerely ,
Hưng - Trần .

Hi Hung Tran... Bill (William) Valavanis is very knowledgeable about suiseki... and right about language, too, though it is a little complicated in this context. It is also over my head; I am not a linguist and can't converse well in either language. Still, I am a serious student.

Euphonics (creating a pleasant sound) has much to do with choices of words, and I would speculate the choice between seki and ishi has more to do with pleasant sound combinations than with function.

For a compound word composed of several characters, there should be consistency of either on or kun. Therefore, if you are hell bent on using the kun reading "ga" to mean "elegant" when combined with the character for "stone," then you must choose the kun reading "seki" (not the on reading "ishi") to create the word gaseki/"elegant stone."

A common Chinese (Mandarin, PRC) reading for stone is shi, and the Chinese pronunciation dan is also used for the same character.

I hope a linguist will clarify for all of us. Bill knows just the source to tell us the backstory... :-)

Chris Cochrane wrote:
A common Chinese (Mandarin, PRC) reading for stone is shi, and the Chinese pronunciation dan is also used for the same character.

I hope a linguist will clarify for all of us. Bill knows just the source to tells us the backstory... :-)

I am not a linguist, but you are right in the aforementioned statement.

I think that Ernest T. Bass went around Mayberry throwing ishis through windows, not sekis. 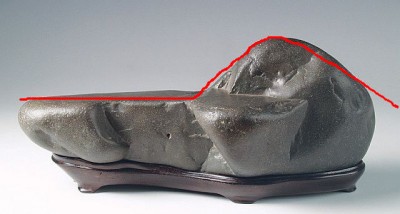 I contacted Yukio Murata, third generation of Kyuka-en Bonsai Garden in Omiya Bonsai Village in Japan. His grandfather, Kyuzo Murata, was a famous bonsai master as well as an authority on suiseki. Here is Yukio's reply on the topic of "ishi" and "seki":

Most Kanji have two pronunciations, one is "On yomi", the other "Kun yomi".

Stones existed in Japan before the Kanji was imported into Japan, and people called stones "ishi".

When the Kanji meaning stone was imported into Japan, people used that Kanji to describe "ishi", thus the Kanji "seki" had two pronunciations, "seki" and "ishi".

In Kanji compounds, the way of pronunciation is BASICALLY consistent. "On yomi - On yomi" or "Kun yomi - Kumi yomi". (There are excepitions.)

In "Kun yomi", Suiseki is pronounced as "mizu ishi" and in this case, the meaning is very different. "Mizu ishi" may be understood as a person's last name or a name of a place.

As I mentioned above, "On yomi" derives from the pronunciation of the Chinese language, so we don't use "On yomi" in a conversation. We use "Kun yomi" because it is the original Japanese word.

When we mention stones (including suiseki), we say not "seki" but "ishi".

The Japanese word "ki" (tree) is pronounced as "moku" or "boku" in "On yomi", but we never say "moku" nor "boku" in a conversation meaning a tree.


Thank you very much for explaining this to the Internet Bonsai Forum Yukio. You were an excellent high school student!

And than you Bill for taking the trouble to find this out for us.

For this easy to understand explaination

Hello IBC Forum - Members ,
Hello Vlado ,
Now , we can understand and distinguish between ISHI and SEKI ...
However , we can better understand ... If there is an explanation of a linguist ( as Mr. Chris Cochrane he say ... )
Thank you very much all us .
Sincerely ,
Hưng - Trần .

Thanks, Bill, and thanks to Yukio Murata. Thanks, Jose Luis.

Respectfully, the explanation is a little confusing when Bill relays,

As I mentioned above, "On yomi" derives from the pronunciation of the Chinese language, so we don't use "On yomi" in a conversation. We use "Kun yomi" because it is the original Japanese word.

For the On yomi (yomi translates as "reading") of the characters "sui + seki" Japanese use the On reading rather than the Kun reading, which is mizuishi as is explained by Bill. The two characters for bonsai only have an On reading; there is no Kun reading for "bon + sai." Bonsai is used in conversation and not just a written form. A Japanese enthusiast would understand the spoken phrase "Bonsai no kokoro." Bonsai is an On reading; kokoro is a Kun reading. I think Japanese language is built upon both forms for writing and conversation.

By choosing to use the On reading, a Japanese speaker would be acknowledging a word's derivation from Chinese. Perhaps, this is the sole key to using one over the other-- choice explains the derivation of a word as a native Japanese form or 'borrowed from China' form.

Additionally, modern Western words are added to conversational Japanese. They are not written in Kanji (Chinese) characters but in phonetic katakana. Older words can also be written phonetically using hirigana (it captures the same sounds but is more round in form than the squarish katakana). Hirigana helps a reader understand which form to use in reading less familiar characters, so occasionally it will be seen as a small subscript alongside the Chinese-style characters.

I agree with you, Hung Tran, that we still need clarification for closure. I am not a reliable source and know just enough to likely make mistakes in trying to clarify.

It is interesting reading....very complex. Thanks for trying to explain....

Dear friends, many thanks to you all , for explanation.
Question was simple and I think explanation is very interesting and important.

Have a nice day.
Vlado