Monk in a cloak with a hood over his head. How do you like? 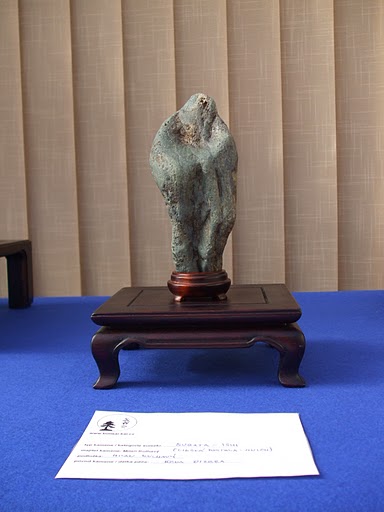 I like it very much. A very expressive stone.
_________________
“It is not the strongest of the species that survives, nor the most intelligent. It is the one that is the most adaptable to change.” - Charles Darwin.

Elegant, beatyfull....how tall is the stone?.

This is a great full-figure stone, Milan. I would encourage you not to refer to it as "a monk in a cloak" for suiseki appreciation. The figure will be recognized by a viewer without naming. If named, it should be referenced as a particular, spiritually elevated figure.
_________________
... visit the U.S. National Bonsai & Penjing Museum, Washington DC USA-- http://www.bonsai-nbf.com

I'm glad you like the stone and a good note the name of the stone.
The stone is 17 cm tall. The stone I got from my friend, President ESA Igor Barta, in a joint search for stones in the Jizera river in the summer of 2009.

Both you and Igor has a good eye for stones....
I was in China with, among many more, Igor. We had a great time.

Hi Milane
...nice stone, how are you doing yoseki, rubbing with hands, or pouring with water...
vlado

Hi Vlado,due to the material (slate and quartz) only pouring water and exposure to sun, wind, rain and frost. With this stone, the road to quality surface of the still long.But never mind, time is working for us in this case. The surface quality and a sense of age (jidai) is very important.

Hi Milan... Thanks for sharing Igor's generosity on this thread... :-). I've heard the nicest things about him and admire his breadth of interests in stone appreciation.
_________________
... visit the U.S. National Bonsai & Penjing Museum, Washington DC USA-- http://www.bonsai-nbf.com

Chris Cochrane wrote:This is a great full-figure stone, Milan. I would encourage you not to refer to it as "a monk in a cloak" for suiseki appreciation. The figure will be recognized by a viewer without naming. If named, it should be referenced as a particular, spiritually elevated figure.

Chris, could you please explain your comments? I'm lost.

Hi Russell... In cultivated Japanese-style bonsai & suiseki appreciation, there are limits on the human-figure stones appropriate for display. You are aware that man is seldom featured in these displays-- a limitless resonance/boundlessness suggestive of remote nature is sought that might only have the thin flavor of human presence (e.g., hut or boat stone representative of plain, modest construction & in-keeping with an imagined landscape view). Human figures are rare as subjects in chosen scrolls complementing bonsai or suiseki; when chosen, expect a reason that heightens the scene for a display-- it can be metaphorical or decorative, but perhaps draws away from scenic remoteness.

I think about John Naka's choice of choosing trees to represent his family in the forest planting Goshin "Spirit of the Forest." It was a very particular allusion which is uncommon among Japanese bonsai forest plantings.

Contrary to focus on natural scenes with neither man nor complex construction, traditional Chinese penjing have often been represented with human figurines, explicit man-made constructions, or a miniature tree styled in shape to suggest a story of man's struggle.

Here is the first sentence on figure stones in Matsuura's latest text as translated/adapted by Wil Lautenschlager...

Sugata-ishi are stones with shapes that resemble birds or other animals, religious icons such as the Buddha or bodhisattva Kannon, or in certain cases even manmade objects such as boats, bridges, or small huts.

I thought that's what you meant, I just hadn't ever gone into it that deeply. I can understand how calling this figural stone "a monk in a cloak" is too defining and restrictive, better to let one's own imagination see what - or who - it sees.

Very nice stone and thanks to Chris for his extremely informative replies!!