Gday Guys,
I dug a big Japanese Maple from a suburban garden a few months back. It was defoliated and potted and now has hundreds of new shoots all over the tree. But in the last month or so, with all of our hot weather, I noticed some black, sap bleeding out of the lower part of the trunk. A week or two later, these areas that were bleeding now have a white fungus growing out from the trunk.

Anyone out there have any idea of what this might be and whether or not it is dangerous to the health of the tree?

A picture would help, but it appears you have a wood rotting fungus in the trunk. The tree is probably doomed. Get it away from your other trees. If allowed in your neighborhood, burn it. Sterilize the pot & any tools you used on it. Don't dump the used soil in the yard.
Iris

Ok, some further info and photos. The tree was dug in Spring and the tree had leafed out completely but chopped to a bare trunk just before digging. It was completely bare-rooted and removed with very few roots. It had a scar from a boring insect (one that digs holes rather than the unexciting kind)

It was potted in a cheap bag of supermarket quality potting mix and left in a very exposed position. Consequently, when the hot and dry weather came through, it got sunburnt. Unsure as to whether this was in the tree before or after the sunburn, but it seems to have a fissure running down the drunk and it is out of this fissure that the white fungus seems to be growing.

Anyway, if anyone has any idea of what the tree might be suffering from, I would love to know 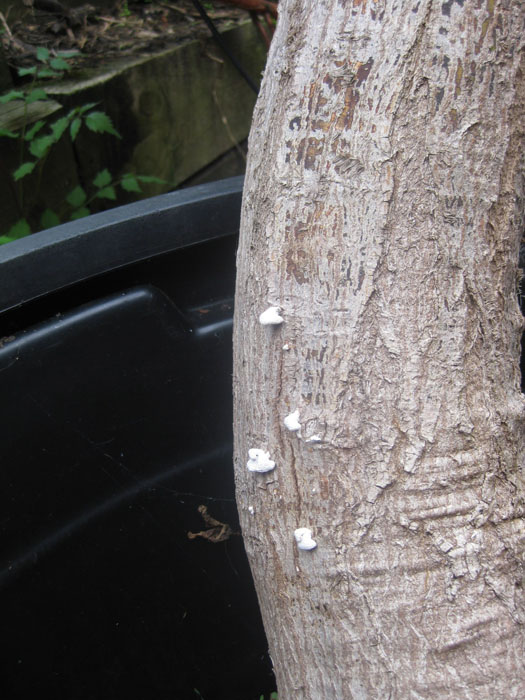 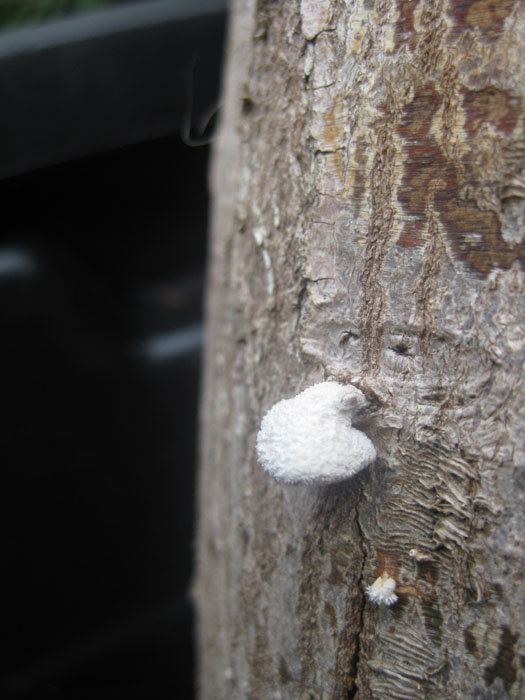 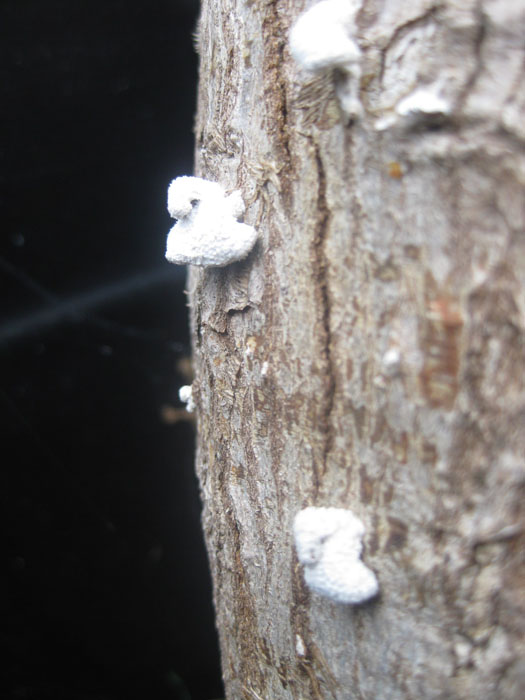 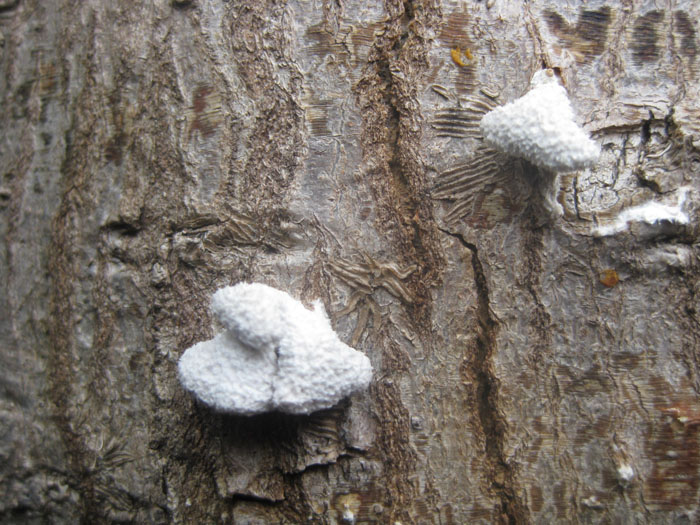 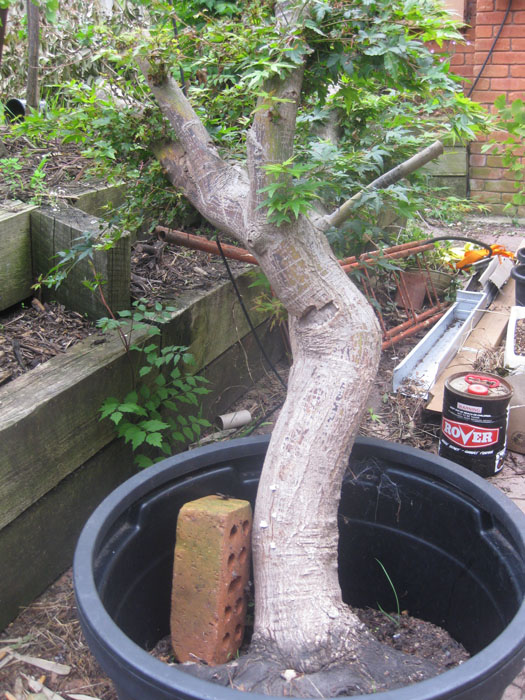 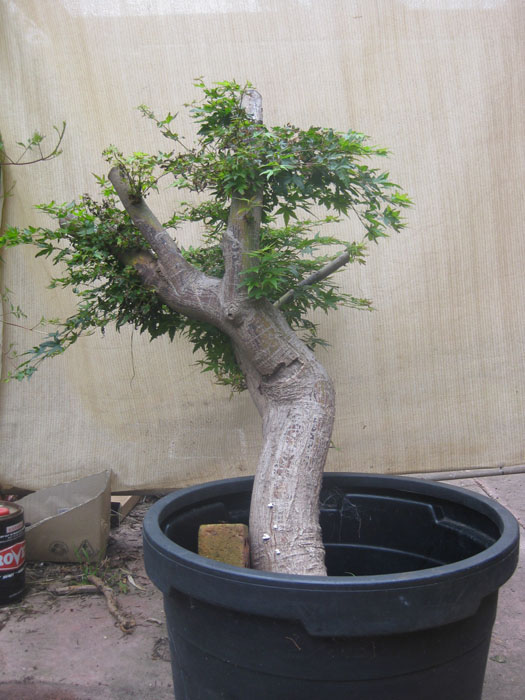 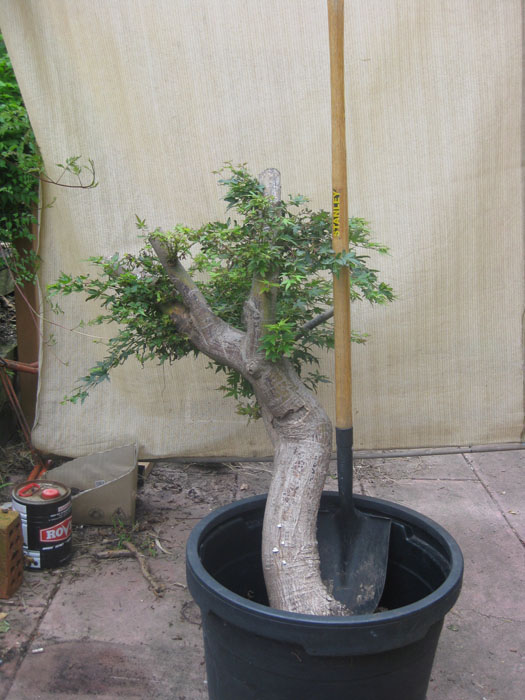 Iris is right. Your other trees may be in danger. At least move this one a LONG way (like completely across the yard or the other side of the house) from all of the others.
_________________
Jim Lewis - lewisjk@windstream.net - Western NC - People, when Columbus discovered this country, it was plumb full of nuts and berries. And I'm right here to tell you the berries are just about all gone. Uncle Dave Macon, old-time country musician

BTW, I have no mean to assert whether is right or wrong, but I have read the advice of not burning trees infected with fungus because a lot of spores would be dissiminated before they are actually killed by heat.

That probably depends on how hot the fire was. Holding the tree in the left hand and the match in the right certainly wouldn't do it, but a raging blaze would likely burn it quickly that the risk would be minimal. But who has a burn pile handy when needed?

Bagging ans tossing out with the garbage probably would be sufficient. Do NOT chop and compost!
_________________
Jim Lewis - lewisjk@windstream.net - Western NC - People, when Columbus discovered this country, it was plumb full of nuts and berries. And I'm right here to tell you the berries are just about all gone. Uncle Dave Macon, old-time country musician

Hi Jim... Is that a positive ID or speculation?

Well, I'm not qualified to make a positive ID -- at least not on the computer, and it would require sacrifice of the tree anyway, but I'd say the chances are good that it is phytophthora or a closely related fungus disease.
_________________
Jim Lewis - lewisjk@windstream.net - Western NC - People, when Columbus discovered this country, it was plumb full of nuts and berries. And I'm right here to tell you the berries are just about all gone. Uncle Dave Macon, old-time country musician

Thanks a lot for that Jim. I will keep the tree "quarantined" for the moment, monitor and treat with Lime sulphur with the hope that it is something other than phytopthera and is able to be treated.