Jim, is he standing or sitting?

David. BONSAI-SAIKEI by Kawamoto is the "bible" on the subject of saikei. The hardcover is long out of print and is a collectors item. It was published softcover and may still be available.
The link is to a used book seller that has copies available.
Mike

Rob Kempinski wrote:Jim, is he standing or sitting?

He is sitting. He's too old to stand all day.

Thank you for posting your replies. We have a number of members around the world (although only 1 lapsed member in the United States of America) so it is good to hear that some individuals in the USA are growing and enjoying Saikei. If anyone is able to post some more pictures of Saikei it would be good to see them.

I've been amusing myself with this on a rainy Sunday afternoon, after I saw a tv program about the Yorkshire Dales in the UK. I was inspired by the stone fences you see around there. The little capsicum is about 5 cm in height. The perspective is much lost in the picture. 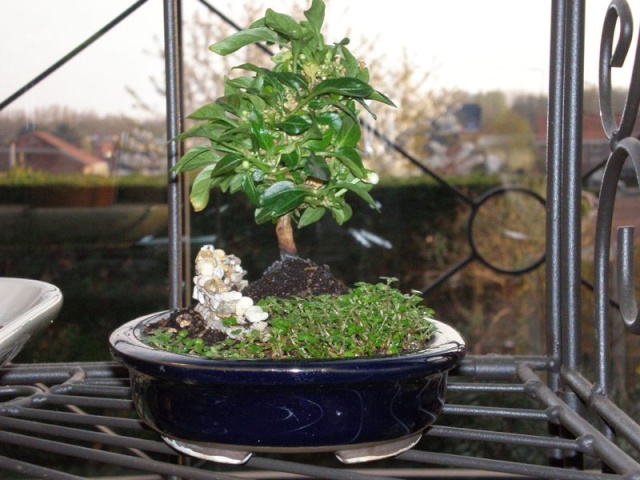 Having visited the Yorshire Dales a number of times you have captured the dry stone wall and tree beautifully, well done.

Do these count, David? 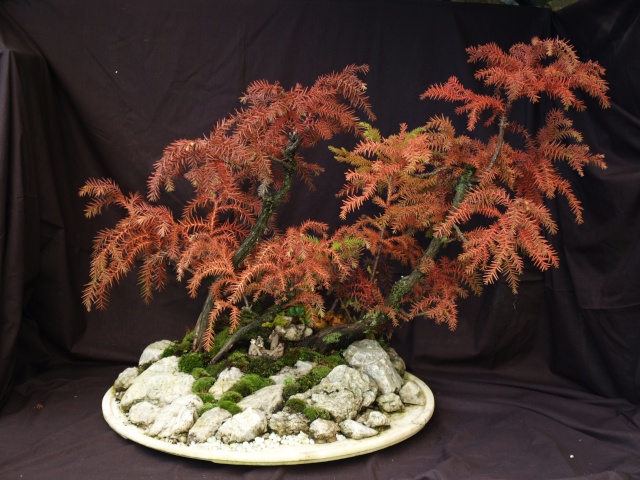 Here's another one - Cryptomeria japonica "Tansu" 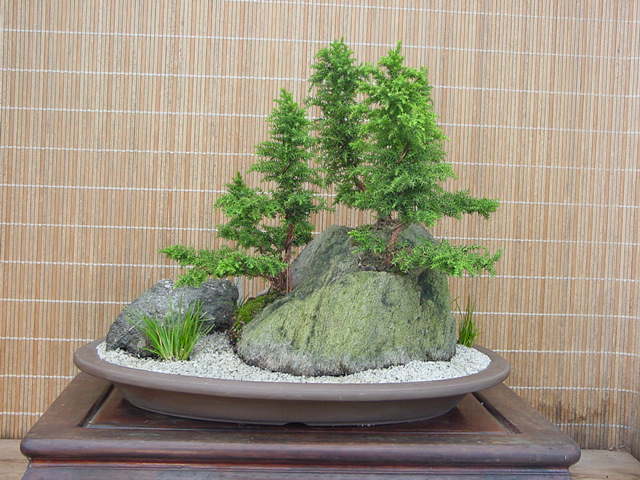 Re: do these count

Whilst not strictly Saikei they are beautiful, you have obviously been influenced by Pen-Jing in your landscape creations. We have a number of members both in the UK and abroad who have both Pen-Jing and Saikei in their collections and enjoy both equaly. I look forward to seeing more of your Landscapes.

A beautiful saikei we use the tansu variety for saikei in the uk as well.

Hi David, at a glance, how would you tell the difference between Pen-Jing and Saikei? This is my main interest and most of my work now revolves around preparation for this type of planting. Am I even getting close with this? Any and all help is greatly appreciated. I think there's alot of interest here in the US, we just need to get organized. 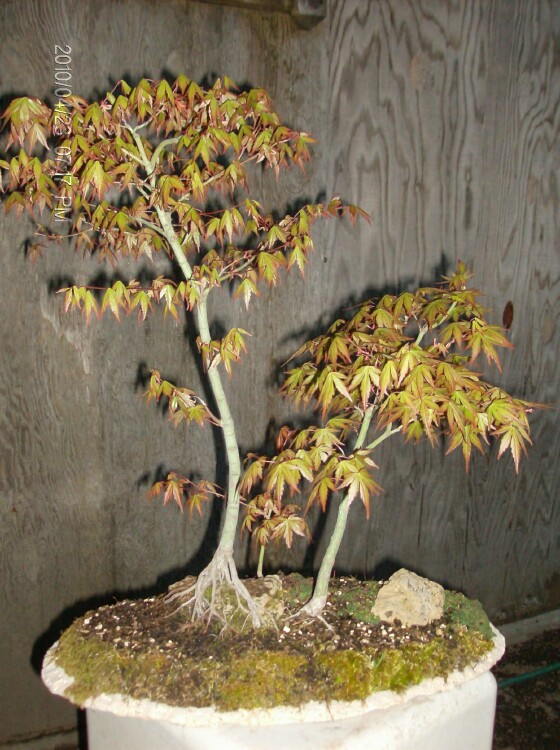 What do you see as the difference between landscape penjing and saikei?

Is Pen-Jing the Chinese expression and the Saikei the Japanese expression? They seem to strive for a separation between their art forms, even is the difference is subtle.

A little something I put together awhile back.... 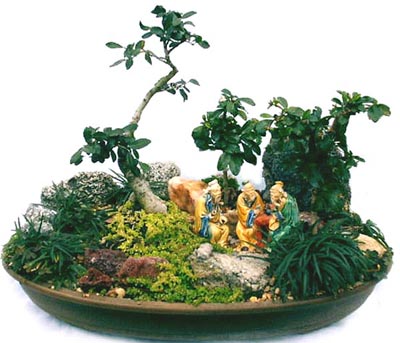 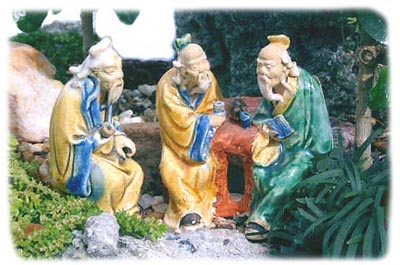 Browsing a used bookstore I found an old copy of "Bonsai,Saikei and Bonkei,Japanese Dwarf Trees and Tray Landscapes" by Robert Lee Behme, copyright 1969, he discusses using Japanese lead and chinese pottery figures for saikei and/or bonkei to add scale and realism to the art sculpture being created.

JimLewis wrote:What do you see as the difference between landscape penjing and saikei?

My thinking is that they are NOT synonymous. In other words if you were shown pictures of a Chinese penjing and a Japanese bonsai you'd know which was which. Each has its own "feel", and most people don't use those terms interchangeably. If you can get a copy of Kawamoto's book (I found mine on ebay) you will see that there is a vast difference between landscape penjing with mudmen, horses and pagodas and Kawamoto's quiet, rugged landscapes of rocks and mixed spruce, hornbeams, ferns and miniature azaleas. A shallow pot, tree, rock and a mudman is NOT a Saikei.

Before any of us in the USA ever saw the first landscape penjing (except maybe from Mr. Wu's book), the late, great Melba Tucker of El Monte, CA, was teaching the art of Saikei at conventions and clubs in Florida, if not elsewhere. That's going back to the 1970's!

And, if I'm not mistaken, "Saikei" is a term coined by Toshio Kawamoto himself to describe his landscapes.

'what is the difference'

Well I seem to have stired up a hornets nest here. From my point of view to ask what the difference between Saikei and Pen-Jing is like asking whats the difference between Chinese and Japanese Bonsai, the answer of course relates to the culture of each Country and their aproach to nature and gardening, (try looking at pictures of chinese and japanese gardens). When you have looked at a few pictures of Chinese and Japanese gardens you will see that Chinese gardens, whilst simple, keep much of the 'noise' of nature whereas the Japanese seek to remove natures cluter from their gardens and simplify the view. As the Bonsai master Mitsuo Matsui said to me a simple tree leads to an unclutered mind in the viewer, this has stuck with me throughout my bonsai and saikei life.

When we look at a Pen-Jing we generaly see a more complicated planting that will take a little while to truly understand, in saikei you can take the image and understand it in a matter of breaths and that I think is the main difference, so to me the difference is in the aproach and the state of mind of the creator. A big difference between the 2 is the lack of ornaments on saikei, for me saikei reflects the rawness/wildness of nature and I prefer to have no obvious signs of man.

These are only my opinions and I appologise if I have upset anyone (certainly not what I intended) my views are not necesarily those of the International Saikei Association.

Don't worry David. You haven't stirred up a hornets' nest at all. As far as this forum is concerned, the best (worst?) you've done is get a few tiny wee ants a bit miffed - if even that. I personally think the debate is a great one to have as I am sure it is answering many people's unasked question. Plus, it makes a nice change from our usual subjects.

I may have been guilty of stirring it a bit by slipping in my own two offerings. I have always been quite clear that there is a difference between penjing landscapes and saikei and I am interested in finding out more about that. My own items were inspired by the work of Qingquan Zhao and I have used his book Penjing: Worlds of Wonderment as my own principal source of information. I inherited a number of trays, penjing rocks and other items from Glasgow Botanic Gardens who had been gifted them by Shanghai Botanic Gardens after the Glasgow Garden Festival in the late 80s. The display at the garden festival had featured penjing trees as well as landscapes. My landscape with the cryptomeria group was created from the only tree(s) I inherited.

Keep it all coming David - there is no such thing as useless information.

Perhaps, to take the discussion further down the road, we could consider the difference between a group planting and a saikei.

Well David, is this a saikei to you or just a rockplanting.
I am really interested in in saikei bud find it very difficult to make it in the right proportions.
Fiona I like the first one you show. 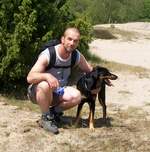 David, many thanks for the response. That's about how I understood it.

They're both group plantings and both branch from the same historical stem. The Chinese plantings -- whether single trees or groups -- have tended more toward "unruliness" than the Japanese' every-leaf-in-its-place-OR_ELSE! approach, making the Japanese plantings seem more abstracts of nature than pictures of nature itself.

Or it used to. These days, the Japanese approach seems even to have infiltrated the Chinese branch of our sport -- witness the work of Qingquan Zhao, which is lovely, but very, very much an abstraction of nature -- especially considering the marble slabs. It -- and Japanese bonsai/saikei -- is filled with the "obvious signs of man" in that the settings are carefully manipulated.

My trees tend to lean more toward the older, unruly, Chinese approach to penjing -- both single trees and group plantings -- trees that Ma Nature might have worked on, then forgotten as she moved on to another landscape.

That old philosopher, by the way, is my only mudman. It was given to me years ago by a 5-year-old grandson (he's now 18) and I think he looks for it each time he visits.

I think that once they were, then they weren't, and increasingly these days, they may be again.

It all started in China, Japan took it over, and now (for better or worse) globalism may be bringing them back together.

fiona wrote:Perhaps, to take the discussion further down the road, we could consider the difference between a group planting and a saikei.

I think this is a really good point. Last night I dug out my Kawamoto book and the cover shot is what appears to be a simple forest with a mountain stone positioned in the center back evoking a distant mountain range. Same for the back cover!!! There is a lot of variety in that book from simple seaside plantings to dramatic mountain gorges and rivers. Throw in a few mudmen and some could pass for Chinese landscape penjing!

In his introduction Kawamoto states that Saikei means "living landscape" and draws heavily from forest and rock plantings. I'm not sure exactly where to start splitting hairs

You know, if you call them "Tray Landscapes" you don't have to worry about all the rest of it. 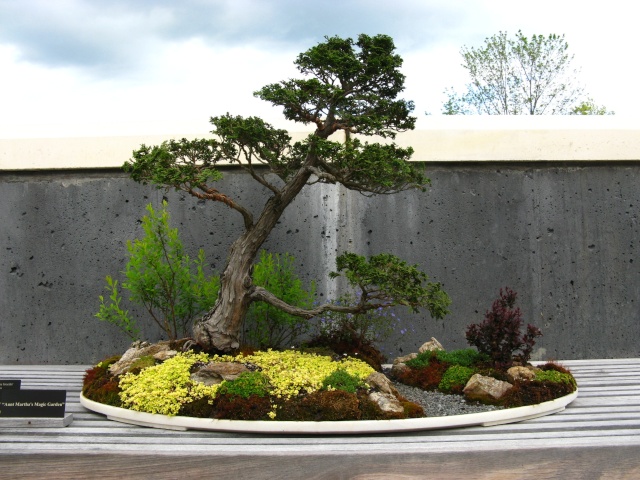 Arthur, that is indeed a very good point!

And David, please don't apologize. This is a great thread, and thank God for something new. Whether we all agree or not doesn't really matter, and I don't think any of us take it that seriously anyway. And who'd want to belong to a forum where we all agreed on everything all the time? How much more boring could that possibly be? These differences of opinions and thought are how we all learn, and I'm grateful for them.