For our show, our club has a firm rule that a bonsai must have been in training at least one year. If I buy a tree that has had some training, and completely restyle it, is the previous training included in the one year minimum?
Iris

to me, if the rule says one year of training then it doesn't matter who trained it. The letter and spirit of the rule seem to be satisfied by the tree you mentioned. 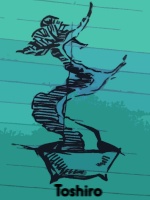 Hah. I'm the one who set the rule.

I just wanted to make sure someone wouldn't think I was breaking my own rule. The tree is still raw, but at our show we need as many as possible.
Iris

That brings up an interesting area to discuss.

Who do we put on a show for? ourselves, meaning club members or the public?

If the bonsai members then I'd understand the rule to have a tree worked on for awhile. But the public doesn't care how long we consider it to take to become a bonsai.
And shouldn't they see the beginnings as well as furthur down the road to really understand the hobby?

Used to run into a similar situation with Koi and shows. Those who were adamat that a fish should only be shown when the pattern finished always got frustrated with those that showed a fish each year rather finished or not.

I think the docens who answer questions to the public can use trees in all stages to explain what this hobby is all about.

then in koi and bonsai both, you would find those that bought a expensive representative ahead of the show and entered to win a major prize without really having worked on the fish or tree. That would really rankle those that bought small and put years into training.

I quess over all the years, I've come to allow everything, new or purchased so that a show has lots of things to see. I want to see the best and don't care if just purchased and I like to see new folks with new trees/koi encouraged to show. If I had a dime for everyone over the decades who were intimidated to show, I could buy many of us a good lunch. a good show is all inclusive

So you think a half-finished painting belongs in an art show? While a bonsai is never truly finished, it should have a decent amount of training before it is put in a show. Of course local club shows are more lenient and national shows are stricter, & regional are in between. The public may not know the difference, but one purpose of a bonsai show is to tell the public what bonsai is all about. It is rather insulting for a serious bonsai artist to find his carefully trained tree next to a sloppily presented specimen. Many club shows have a separate section for beginners. If they have the viewers vote, they may vote on the best tree by a first time exhibitor.
Most flower shows have a rule that entries for a cultural award must have been owned by the exhibitor for a certain amount of time, say 6 months or a year. The Japanese tradition is that anyone can enter a tree, even if he bought it yesterday. Reasoning is that the prize goes to the tree, not the owner. However, in small shows where entries are limited, this can be very unfair. I remember once at the MidAtlantic, where each club could only show three trees, two from a certain club were recently purchased finished imports. That is just as wrong as allowing someone to exhibit an untrained tree.
Iris